Could our media consumption preferences correlate with how we behave on the road? 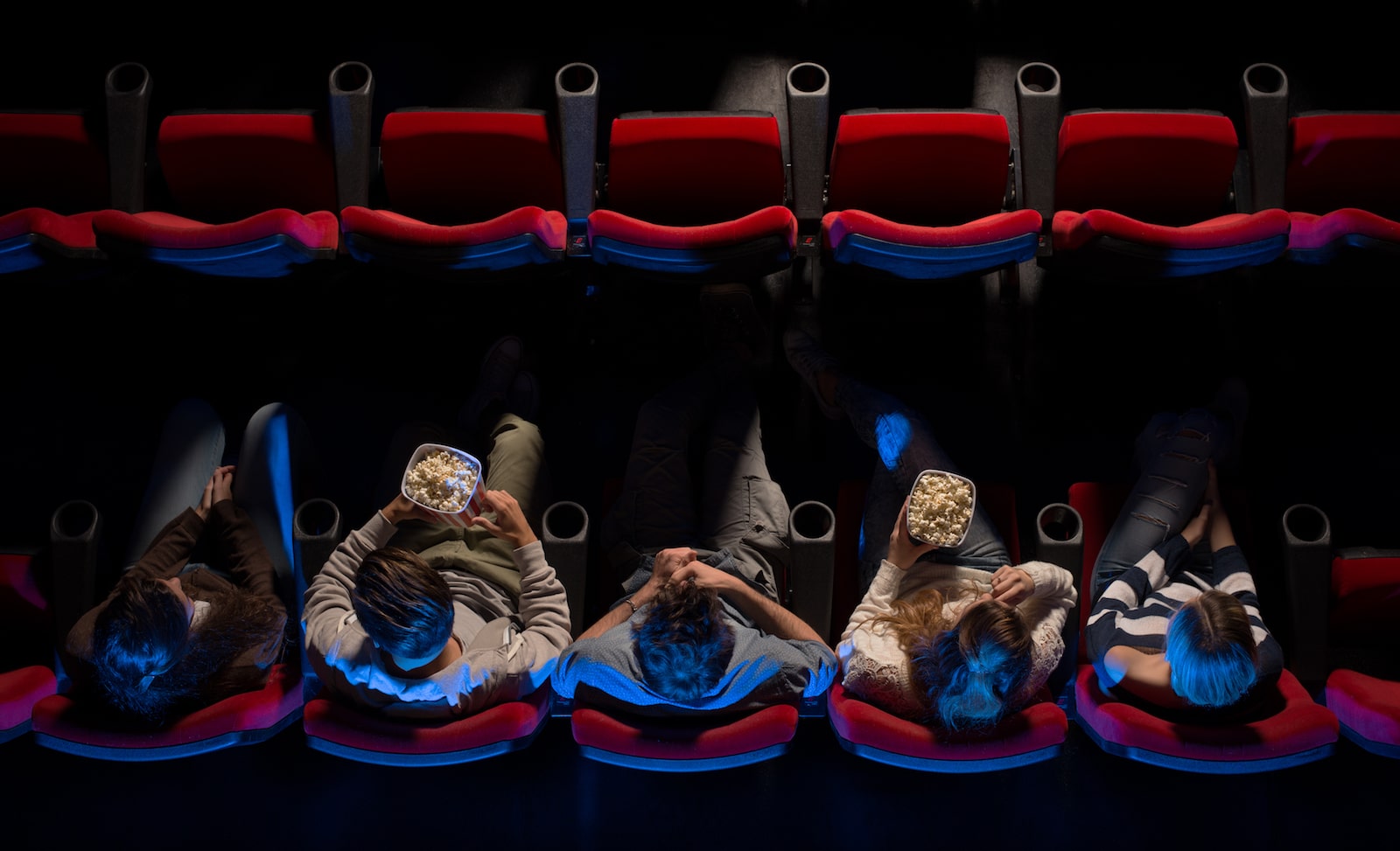 As the media landscape changes, so do the ways we choose to entertain ourselves. Music isn’t confined to the radio; television isn’t just on the tube. According to Deloitte’s most recent State of the Media Democracy report, streaming services are on the rise, content formats are diversifying, and the entertainment market finds itself having to adapt to the ever-fickle preferences of the emergent Generation Z.

As a result, as our favorite forms of entertainment are merging, our preferences become more fluid, segmented, or even reflections on how we relate to popular culture. Plus, our likes and dislikes don’t exist in a vacuum; they might be all too intertwined with greater truths about ourselves. What could our media preferences indicate about how we behave, work, or even…drive?

Curious about how the changes in technology have impacted cultural preferences for entertainment—and, more importantly, whether or not separate tastes had any correlation with driver behavior—the data scientists at Insurify decided to take matters into their own hands.

It’s never been easier to compare auto insurance quotes thanks to these top-reviewed sites.

Looking for the best car insurance companies of 2022? See our updated rankings of the year’s best carriers.

The data scientists at Insurify, a platform that lets users compare auto insurance quotes in real time, collected data from their database of over 1.5 million car insurance applications, which ask questions about driving history, vehicle type, and other personal data from the past seven years. A random sample of shoppers were also surveyed about their favorite form of entertainment. From the response data, Insurify’s data team was able to determine the significant differences in reported driver behavior (and other data) between different types of respondents.

Mass Media Preferences: Where Drivers Do (and Don’t) Collide

The final results of the survey show a neck-and-neck virtual tie between TV and music. As we’ve noted, changing media formats and the explosion of streaming services have made these two entertainment media more accessible than ever, so it’s no wonder they dominate here. But the so-called Golden Age of Television—and the sheer amount of programming now available—might be partially responsible for TV’s slight edge.

Let Insurify’s car insurance calculator get you a quick, no-hassle rate in seconds.

Suspension on your record? Let us help you through the SR-22 insurance process.

On a tight budget? Low income car insurance discounts are at your fingertips with these new rates for 2019.

When it comes to driver behavior—because, yes, all of us have made mistakes behind the wheel—there was no significant difference between respondents. However, it is worth exploring the prevalence of each driving incident as a share of every category of respondent.

Accidents: The top spot for at-fault accidents went to those who preferred Video Games, with 15.5 percent of gamers claiming to have been in an accident within the last seven years.

DUIs: Though they’re small shares across the board, Video Games nabs the dubious honor yet again. Over 3 percent of gamers had a DUI on their record.

Speeding: Noticing a pattern here? Video Games again. We can’t say we’re surprised that a healthy amount of gamers had a need for speed on the road, too.

Suspensions: A suspended license usually comes as a result of a serious offense. Interestingly, over 5 percent of that dubious Other group reported a suspended or revoked license in their recent past.

Again, none of these results for driver behavior were statistically significant. So no matter which driving incidents might have caused a bump in your insurance premium, you can’t simply chalk it up to whether you’re a book lover, movie junkie, both, or neither. Sometimes a mistake is just a mistake!

SUV sales are on the rise, and not just because they’re the perfect blend of functionality and aesthetics for your neighbor Linda.

These heavy-duty vehicles, which are more common choices for young professionals and their families, are not always seen as the thinking person’s car. (Something about the design of the Ford Explorer doesn’t evoke literary sentiments.) But nearly a third of book lovers in our survey reported driving an SUV.

4. What are you driving? 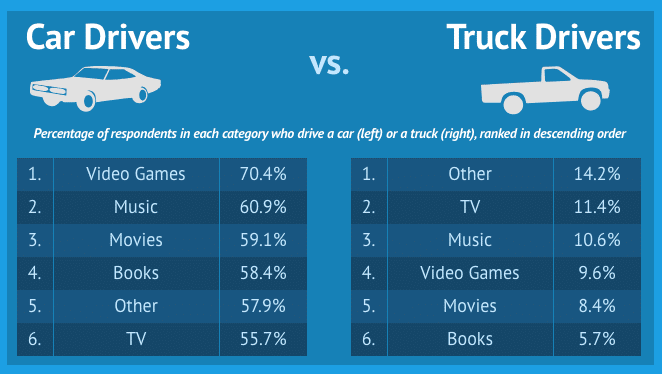 All that entertainment for car drivers and truck drivers

Car drivers (as opposed to those who listed a truck as the primary vehicle on their policy) represented a larger share of our sample overall. But within each category of respondent, different proportions of vehicle ownership emerged.

For instance, don’t expect to see many pickups in your driveway next time you host your book club. Those who preferred books also drove trucks at a 5.7 percent rate—compare that to the 11.4 percent for TV lovers. That means that TV was 2 times more likely to be chosen by those heavy-duty drivers than book reading.

Brand iconicity is the calling card of many American car makes. Besides that, what’s the real difference between, say, a Ford and a Toyota? However, if you drive a U.S.-born vehicle (as opposed to a foreign make), there may be a more subtle correlation between your car and your media platforms of choice.

A significantly higher percentage of domestic vehicle drivers reported preferring music to reading—perhaps they were busy bumping the national anthem on a road trip. Of course, there’s always rest stops for a reading break every hundred exits or so.

Check out the full results below: