If you’re not from Omaha, you might think that the Cornhuskers State is covered east to west in prairies and old wagon ruts. However, its city streets are just as metropolitan as you’ll find anywhere else and have similar problems and pitfalls.

With worsening traffic congestion, even the highway improvement plans the city has in place aren’t going to fix everything for the daily driver. The best choice drivers can make is taking charge of how much they pay for the insurance policies they have in place and how to find the better deals that are surely out there.

The average cost of Nebraska car insurance will vary from city to city and between insurance companies. Insurify analyzed the latest insurance rates in Omaha, NE to find you the cheapest quotes in the area.

Here are the cheapest carriers in Omaha for the following user profile: a single, 30 year old male with a clean driving record who drives a 2012 Honda Accord and pays a $1,000 deductible for the state’s minimum liability insurance.

Minimum car insurance laws are as varied as the U.S. states. With each state enforcing different rules and regulations, it can be confusing to know what’s required from what’s recommended from what’s only going to make your premium more expensive. Let us help you with that.

In Nebraska, drivers are required to purchase car insurance coverage meeting at least the following minimums:

Uninsured and underinsured motorist coverage cannot be waived. Its minimums can be increased for drivers with families or those looking for added peace of mind. For increases, drivers typically need to notify their insurance company in writing.

In Omaha, running a stop sign can have a serious impact on your insurance rates. On average, Omaha drivers caught running a red light are paying a whopping $291 for car insurance each month. While drivers with a clean record pay an average of $202 in monthly insurance premiums, run a red light, and you’ll pay significantly more. Speeding or an at-fault accident can raise insurance rates too. Omaha drivers pay $229 and $252 per month, respectively, for these driving mistakes.

Car insurance rates are determined by calculating a driver’s risk. Your credit score is one thing that goes into making this calculation. If you’re asking why, it’s because data crunchers have determined that a credit score can say a lot about a person’s chances of filing a claim. If you haven’t considered your credit score before, you probably should. Omaha drivers with an excellent credit score pay on average $187 per month for car insurance.

Driver’s licensing services in the state can get a little confusing because they are split between state and county offices. Basically, you need to know that you can obtain a driver's license in any Nebraska DMV driver licensing office while vehicle titles and registrations are issued in the county where you reside. There are two driver licensing offices in Omaha and one in Bellevue. As for those registrations, Omaha sits in Douglas County, where there are five county branches to serve you.

Metro Omaha offers bus, bus rapid transit, and paratransit transportation options. Most recently, it launched a new system—Omaha Rapid Bus Transit (ORBT)—to streamline transportation and get residents around the city faster. ORBT serves 23 stations and four stops along its eight-mile route from Westroads to downtown. The difference between bus and bus rapid transit services is that the rapid transit line uses smart technology and a different kind of bus (one with a flexible, accordion-shaped piece in the middle). These service the city more frequently (every 10 minutes). Their stations use digital displays and audio announcements to track and announce stops, and raised platforms for level boarding mean improved accessibility and quicker boarding/deboarding. Park & Ride options as well as shared van rides for citizens with disabilities (MOBYride) are also featured modes of transportation. Omaha’s bikesharing system (Heartland B-cycle) allows cyclists to travel at their leisure, while on-demand ride services include the usual suspects: Uber and Lyft.

Conclusion: How to get the best and cheapest car insurance in Omaha, Nebraska

Although prairies do dot the Nebraska landscape, those who call Omaha home are more likely to be found behind a good cup of coffee than a wagon train. And though many of their ancestors may have played a part in settling the West, there are several reasons they shouldn’t be too settled on the car insurance they carry.

First, never has there been a time in our history where technology has played such a huge part in our getting exactly what we want when we want it. That goes for car insurance too. Today’s AI-based insurance comparison sites like Insurify can whip up quotes from top national and regional carriers in minutes. And second, switching carriers is easier than people think. As long as you have a new insurance policy in place before you cancel the old one, you’re golden.

For more detailed Nebraska city level guides, check out these below.

Using a proprietary dataset of over 1.6 million car insurance shopper applications, the data scientists at Insurify have run various studies on driver behavior across geographical locations, age ranges, motor vehicle registration, and other variables all related to auto insurance coverage.

We’ve been able to determine the speediest cities in the nation, the most popular cars among age groups, and the occupations with the worst drivers, among other insightful reports. We’ve also launched annual awards campaigns to congratulate the communities across the country who have excelled in environmentally friendly initiatives, educational attainment, and other areas.

Here's how Omaha stacks up for the state of Nebraska:

The state of Nebraska offers many green driver incentives, including federal tax credits, rebates, and discounts through some car insurance carriers. 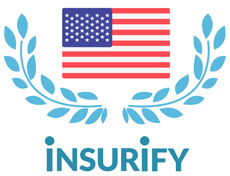 Bellevue won Insurify's Most Patriotic Cities Award for the state of Nebraska. Bellevue is widely purported to be Nebraska's oldest city, and is adjacent to Offutt Air Force Base.

Whose insurance company pays for an accident in Nebraska?

States are either at-fault or no-fault car accident states. Nebraska is an at-fault”car accident state, which means that the financial responsibility for an accident is always held by the person who caused the accident. Therefore, it is their insurance company that pays for any financial losses stemming from the accident, including injuries and lost income. You might also hear at-fault states referred to as tort states.

What is the best car insurance company in Omaha, Nebraska?

The word “best” means something a little different to everyone. But at Insurify, you can view the best car insurance companies per city by looking at how companies rank using the Insurify Composite Score. This score is calculated by analyzing multiple factors that indicate the quality, reliability, and health of an insurance company, including industry reports, surveys, mobile app reviews, and user-generated reviews. As of this writing, the best car insurance companies in Omaha according to the Insurify Composite Score include American Family, Allstate, Nationwide, State Farm, Travelers, and Progressive. “Best” can also mean best for your wallet. Shopping insurance plans using Insurify can help you find that too.

If I get comprehensive coverage, will it cover everything?

No. Even though the word itself tends to mean “full” or “complete,” in the insurance industry, it has a much more particular meaning. Comprehensive coverage covers things that might happen to your car outside of a collision—fires and floods included. Many times, these types of often costly events are also known as “acts of God.” Other types of coverage that you may buy depending on the state in which you live and personal preferences include bodily injury (BI) and property damage (PD) liability coverage, personal injury protection (PIP), collision coverage, and uninsured/underinsured motorist (UM/UIM) coverage.
Compare Quotes — Save Up to $400
3047 Reviews

Insurify is rated 4.8 out of 5 based on 3047 customer reviews.With over 30,109,648 quotes provided, we have helped thousands of customers save time and money!