More Chances to Save in the Land of Opportunity

The Natural State is home to breathtaking landscapes complete with over 600,000 acres of lakes and 9,700 miles of streams and rivers. From the Ozark Mountains in the north to the Coastal Plain in the south, and the valleys and mountains in between— Arkansas has it all. Whether you’re road-tripping through the south or are lucky enough to call Arkansas home, with nearly one million registered vehicles on over 200,000 miles of roadways, a solid auto insurance policy is vital for every driver. Compare and save on the best and cheapest Arkansas auto insurance quotes.

Here are the cheapest carriers in Arkansas for the following user profile: a single, 30 year old male with a clean driving record who drives a 2012 Honda Accord and pays a $1,000 deductible for the state’s minimum liability insurance. We averaged rates for the twenty most populous cities in Arkansas.
Get Quotes

Auto insurance costs will vary between locations and insurance carriers. Insurify analyzed the latest data for the five most populous cities in Arkansas to find you the cheapest quotes in each of these metropolitan areas.

For drivers in Arkansas, that are looking for the cheapest quote possible, you can consider a state minimum policy for liability insurance.

For drivers in Arkansas, that are looking for a full coverage policy that includes comprehensive and collision insurance it’s important that you evaluate all of your potential insurance options to ensure you are finding the best rate.

To simplify comparing companies, Insurify has analyzed rates from top insurance providers in Arkansas. The following are the best insurance rates from carriers that offer full coverage auto insurance in Arkansas.

Here are the cheapest insurance companies in Arkansas based on averaged sample rates for four driver profiles that included varied gender, age, driving history, credit, marital status, prior insurance, higher education, employment, and military service. Average rates may vary depending on the profile and background of the policyholder.

For Arkansas drivers with a clean driving record free of any moving violations, auto insurance rates may be significantly lower. State Farm offers the best options for good drivers in Arkansas, at $46 a month. With both cheaper premiums and additional safe driving discounts, it can really pay to have a record free of accidents or traffic tickets.

If you’re under 40 years old in the state of Arkansas, you will likely pay more for auto insurance coverage than the average driver. Since inexperienced drivers pose a higher risk for insurance providers, their rates are often significantly higher. USAA offers the cheapest car insurance rates for young drivers, averaging $20 a month. New drivers must abide by special driving restrictions, including curfews, electronic device limitations, and passenger age restrictions. Be sure to familiarize yourself with these rules before hitting the road.

Insurance policies for 21-year-olds generally run higher than the national average by a significant margin. Even though they’re no longer considered teen-drivers, 21-year-olds are still regarded as high-risk to insurers. Unlike most states, Arkansas 21-year-olds benefit from the state’s ban on using gender, education level, and credit score as factors when calculating premiums. This will generally help young Arkansans lower their monthly payments. To find the cheapest car insurance for 21-year-olds, use a car insurance quotes comparison site like Insurify.

If your license has been suspended or revoked, these car insurance companies will file an SR-22 with the state of Arkansas on your behalf.

The Arkansas Department of Finance and Administration has DMV outposts all over the state.

At the DMV, Arkansas residents can access services like driver’s license and identification card registration and renewal, vehicle registration, and license plate pick-up, as well as insurance information and services. For the shortest wait times, avoid planning your visit on Mondays and Fridays or during lunch hours. Regardless of where you live in the Land of Opportunity, a DMV shouldn’t be too far. Arkansas residents may be able to skip their visit altogether and get what they need through the DMV’s online portal.

For more detailed rates on specific personas and driving histories, use our Arkansas insurance rate resources.

Drawing from their database of over 4 million car insurance shopper applications, the data scientists at Insurify have published various reports on driver behavior and car ownership — including how Arkansas drivers measure up to their fellow motorists across the United States in the rankings above.

While car accidents are a sadly unavoidable feature of time spent on the road, rates of accidents do vary from city to city and from state to state. Among all fifty states, Arkansas drivers rank 41 in the number of car accidents per driver.

Exceeding the speed limit can endanger others and leave a permanent stain on your driving record. Arkansas drivers rank 35 in the number of speeding infractions per driver across all fifty states.

While driving while intoxicated is never acceptable, it’s a more common offense than many assume. Arkansas drivers rank 23 in the number of DUI’s per driver across all fifty states.

Some car models are just more popular than others and trends can vary from place to place. The most popular vehicle in Arkansas is the Ford F-Series Pickup.

The Insurify team classifies rude drivers as those who commit the following driving offenses: failure to yield or failure to stop, improper backing, passing where prohibited, tailgating, street racing, or hit-and-runs. Among all fifty states, Arkansas drivers rank 42 in rude driving infractions.

Street racing might seem like something straight out of a Fast and Furious movie, but it’s a real issue that threatens public safety. Among all fifty states, Arkansas drivers rank 8 in street racing violations per driver.

Failure to Yield the Right of Way Arkansas

Failing to yield the right of way isn’t just frustrating for other drivers; it’s dangerous, too. Arkansas drivers rank 18 in failure to yield violations per driver across all fifty states.

Reckless driving refers to a specific traffic violation: when drivers willfully act dangerously in spite of the risks they’re imposing on both themselves and others. Among all fifty states, Arkansas drivers rank 28 in the number of reckless driving offenses per driver.

On the state level, Arkansas has mixed record when it comes to environmental initiatives. In Little Rock, an EPA grant recently funded green infrastructure, including rain gardens and tree meanders along Main Street. However, the Arkansas Department of Environmental Quality recently finalized new rules that roll back standards for pollution produced by electric power plants. 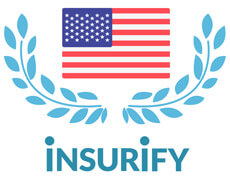 Van Buren won Insurify's Most Patriotic Cities Award for the state of Arkansas. It is just northeast of Fort Smith, an historic military post and the planned site of the new United States Marshals Service National Museum.

Insurify used a recent report from TripNet to rank twenty-five states by roads in poor condition, structurally deficient bridges, and fatality rate per 100 million vehicle miles traveled (VMT) on rural roads. Knowledge of infrastructure in Arkansas is vital for all car insurance shoppers hitting the road in The Natural State.

Which insurance company offers the cheapest auto insurance in Arkansas?

The best way to get the cheapest car insurance in Arkansas and save on your insurance premiums is to compare quotes from all companies in your area. Use a car insurance quotes comparison site like Insurify to compare up to 10+ real quotes for your specific driver profile and unlock savings and discounts. Rates can fluctuate greatly based on whether you're a safe driver or a high-risk one, but you should never overpay. Insurify provides the cheapest car insurance quotes and companies in your area in just a few seconds.

How is fault assigned after a car accident in Arkansas?

As a fault-based state, after a car accident, the driver found at-fault will be responsible for compensating other drivers and passengers for property damage and bodily injury. Blame may be split amongst multiple drivers, and damages would be split accordingly.

What is the punishment for committing a DUI in Arkansas?

DUIs can really damage a driver’s driving record. The punishment can be severe, too; Arkansas drivers risk one day to one year in jail, $150 to $1,000 in fines, court fees, six-month license suspension, drug/alcohol treatment, and mandated installation of interlocking ignition devices. Punishments worsen for subsequent offenses.

What happens if I drive uninsured in Arkansas?

Driving uninsured puts yourself and those around you at great risk. An estimated 16.6 percent of drivers on Arkansas roads are uninsured or underinsured. If caught, uninsured drivers face hundreds in fines, civil penalties, license and registration suspension, SR-22 requirements, and even jail time for subsequent offenses.

Insurify is rated 4.8 out of 5 based on 3668 customer reviews.With over 30,109,648 quotes provided, we have helped thousands of customers save time and money!