Click here to see the 10 States with the Worst Drivers report for 2021 .

Some states lead the country in GDP or tourism, but which should be known for their bad drivers?

When it comes to operating a motor vehicle, not all drivers pass with flying colors. While some boast a perfect record, others find themselves facing speeding violations, citations, DUIs, or other traffic infractions over the course of their driving careers. With spring around the corner, more cars will soon venture back onto the roads after a winter of inclement weather. That said, these potential beach days and picnic excursions may be frequently accompanied by bad driving practices. According to the National Highway Traffic Safety Administration, over 37,000 people lost their lives in fatal traffic crashes in 2016 alone. However, some states see more of this bad driving than others.

The team of data scientists at Insurify sought to determine which states are home to more than a fair share of reckless motorists. Drivers were included in the analysis if they had at-fault driving infractions on their record from within the past seven years. While the Midwest and Mountain region had strong showings, the coastal Southeast held a presence at the top of these rankings as well. Buckle up: these are the top 10 states with the worst drivers. 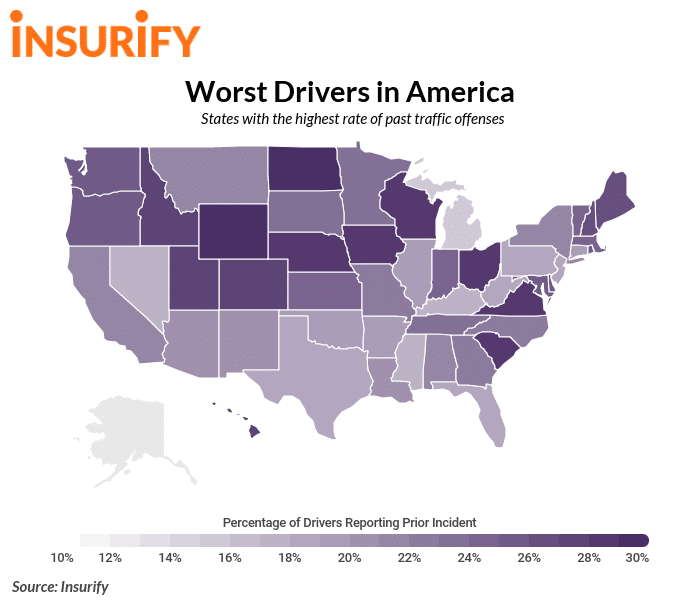 The analysts at Insurify, an auto insurance quote comparison website, pulled from their database of over 1.6 million applicants to determine which states had the highest share of drivers with at-fault incidents. Those applicants are asked to answer questions regarding their driver history, personal, and vehicle information, including whether or not they had had an at-fault traffic violation within the past seven years. At-fault incidents included accidents, DUIs, failures to stop, speeding, reckless driving, passing violations, and other causes for citation. This share of respondents was then analyzed against the statewide driving population as a whole to determine the breakdown of at-fault car owners by state. Additional data on traffic fatalities and registered automobiles come from the Insurance Institute for Highway Safety and the Federal Highway Administration’s 2016 report , respectively.

US States With the Worst Drivers

A paragon of natural wonder and conservation, the Centennial State is no model for responsible driving, with 27 percent of drivers holding a record of past driving offenses. With almost two million cars on the road, this rate of transgression is costly: the state saw 3,602 traffic deaths in 2017 alone.

It doesn’t get easier to scroll through car insurance comparison sites ! Find the best sites for quote comparison today.

Idaho, one of the nation’s more sparsely populated states, nonetheless has one of the highest rates of at-fault driving offenses. Despite having a significantly smaller population and a lower density of cars on the road, Idaho saw a greater quantity of fatalities than Nebraska and a similar number to Connecticut and Utah.

Wisconsin is still one of the top 10 states for traffic violations despite taking hardline measures against such offenses. Drivers will have their licenses automatically revoked for a total of five years after accumulating 12 or more moving violations or four or more major violations within a five-year period. Though infraction rates remain high now, perhaps this Habitual Offender Law will succeed in bumping Wisconsin off of the top 10 worst driver ranking in years to come.

How much is car insurance ? Use our guide to typical rates by age, driving history and geography.

As the seventh-ranked state for poor driving, Virginia is not only prominent among incident-prone American states, it is also diverse in the range of those infractions. Old Dominion is third in the nation for speeding tickets , fifth for repeat traffic offenses , and Virginia Beach, VA is one of only two cities west of the Mississippi River to classify in the top 25 nationwide for rates of DUI .

As the state on this list with the most registered cars on the road, Ohio’s rate of bad driving arguably carries the largest heft. With such a large sum of motorists reporting a past driving offense, it may come as a surprise that Ohio has a much more lax policy on traffic infractions than that of Wisconsin. While a 12 point accumulation over five years will result in a five-year license revocation in the latter, 12 points against your license in just two years will only trigger a 6-month suspension in Ohio.

South Carolina, though in the middle of this top 10 ranking, has the second highest fatality rate on the list. This may result in part from the fact that 17 percent of drivers report a history of speeding—the highest in the nation. Additionally,  almost one in three of those drivers continue to speed—and given South Carolina’s position on this list, are likely commit other violations—in the future.

Nebraska sees fewer than a million registered automobiles on the road, but has an infraction rate of 28.5 percent. At the center of the Midwest (the most well-represented region of this ranking), Nebraska is home to a share of bad drivers that is 1.24 times the national average. However, despite ranking highly for driving offenses, most are not fatal accidents, as Nebraska’s fatality rate is almost exactly the national average of 11.4.

Even after a mistake, ensure you are considering all your options for DUI car insurance .

Suspended license? Find help on this guide for SR-22 insurance .

The Hawkeye State brings us to our top three states for worst drivers in America with almost 29 percent of drivers reporting a history of traffic incidents. DUIs contribute a noticeable amount to these figures, as over 1 in 5 adults in Iowa engage in regular excessive drinking, according to the CDC .

With the smallest population and the fewest registered cars, Wyoming nonetheless has the second highest rate of bad drivers and the highest fatalities of any state on this ranking. While low-density states report the fewest accidents, they have the highest rate of fatalities, largely as a function of DUI-related deaths. Correspondingly, as the leading state for repeat DUIs nationwide, it may come as no surprise that Wyoming ranks in the top two for past traffic incidents.

Home insurance comparison sites at your fingertips: these top-rated sites can offer you discounts and savings all on one platform.

The state with the highest percentage of bad drivers in America is North Dakota. Despite having speed limits that top out at a generous 75 mph, over 16 percent of drivers report a speeding ticket on their record. Additionally, North Dakota has the second-most repeat DUIs and leads the country in repeat license suspension . Given these dubious distinctions, it is fitting that North Dakota takes the crown in this line-up…it may just be one they never wanted in the first place.