Looking for your dream home? If you live in one of these states, you might have to consider a hefty home insurance premium as well. 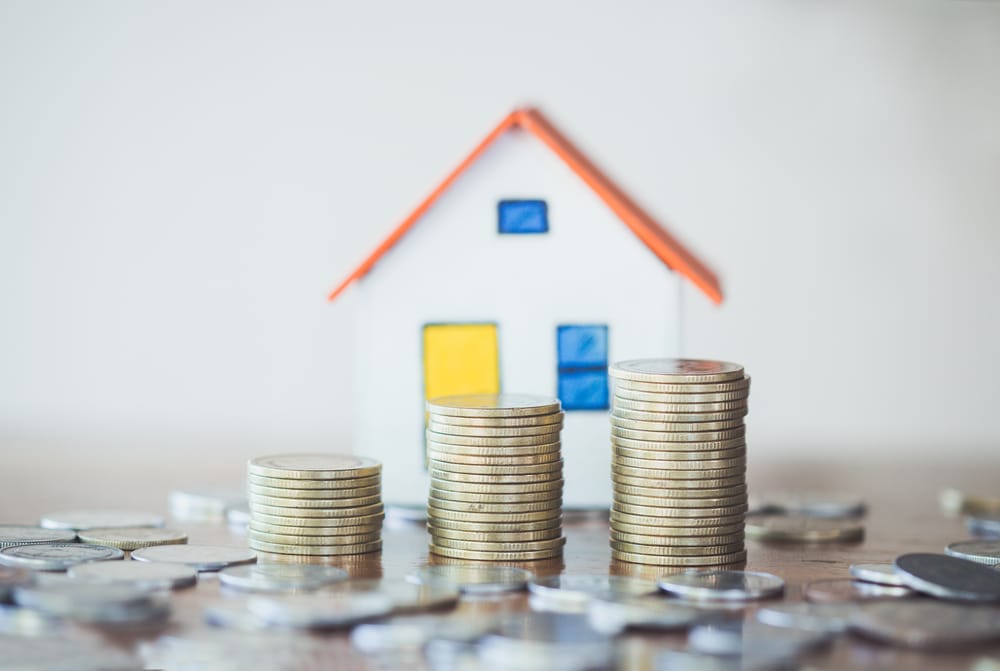 Buying a house, whether a starter home or a place for the whole family, represents a significant investment for all homeowners. And though your home may be in a perfectly “safe” location, there’s always the chance that disaster could strike in the form of theft, fire, or even a natural disaster, leaving you with stolen or destroyed property. In order to protect against the worst-case scenario, the vast majority of homeowners choose to invest in homeowners insurance. In fact, according to a poll conducted by the Insurance Information Institute (III) in 2016, 95 percent of homeowners have some form of homeowners insurance.

While nearly every homeowner has an insurance policy of some kind, not all policies are created equal. After all, some areas of the country are prone to greater risk than others. Homes in Tornado Alley or on the Southern Coast are prone to disasters such as tornadoes, hurricanes, and floods, while homes in densely populated urban areas might be more prone to theft or other forms of property damage. Interested in discovering more about regional trends in home insurance prices, researchers at Insurify determined the 10 states with the most expensive home insurance. 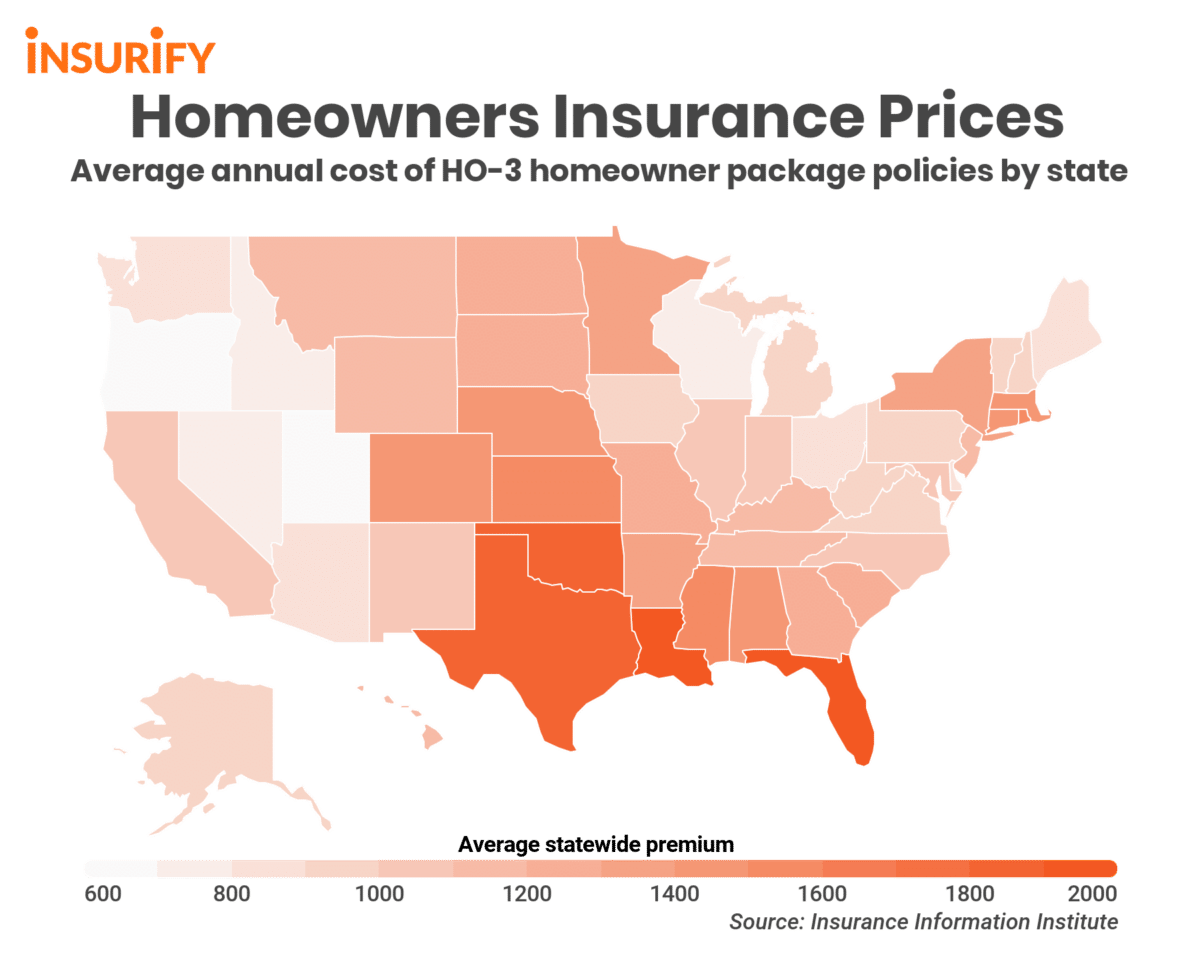 The data science team at Insurify, a platform that lets users compare home insurance quotes, analyzed the numbers to gain a better understanding of homeowners insurance premiums across the United States. Referring to HO-3 homeowner package policy data (for owner-occupied dwellings with one to four family units) released by the National Association of Insurance Commissioners (NAIC), they determined the states with the most expensive homeowners insurance. The median home value and most common natural disaster in each state were obtained from Zillow and the Federal Emergency Management Agency (FEMA), respectively.

US States With the Most Expensive Homeowners Insurance

States With the Most Expensive Homeowners Insurance

Nebraska kicks off the countdown, with an average annual homeowners insurance premium of $1,481. The Cornhusker State is one of six states that make up Tornado Alley, a name coined in the 1950s for an area of the country where tornadoes are most frequent. Despite this,, severe storms are the most commonly declared natural disaster in Nebraska. Since 1953, there have been thirty-seven storms that have reached the natural disaster level, according to FEMA, but just five tornadoes.

If you’re looking for a way to compare home insurance quotes, we’ve got you covered.

These are some of the top rated home insurance companies.

Massachusetts is one of two states from the Northeast — a region of the country famous for its winter snowstorms — in the top ten, and one of just four states on the list with a median home value above the national average. In fact, Massachusetts’ median home value of $422,856 is higher than all but three other states, likely due to expensive home prices in and around Boston.

Another state well-known for its blizzards, Colorado checks in at number eight on our list. Despite these cold winters, the most commonly recorded natural disasters in Colorado are its wildfires. Since 1953, sixty-eight fires have achieved disaster status; the majority of which started in the dry summer months. In addition to high homeowners insurance premiums, homes in the Centennial State also cost interested buyers a pretty penny: Colorado’s median home value of $397,820 is significantly greater than the national average, and the sixth most expensive out of all 50 states.

Do you need home insurance comparison sites? Look no further.

Mississippi, with annual home insurance premiums nearly 27 percent above the national average, is the first of five Southern states in the top seven. It also has the lowest median home values of any state in the top ten. This can in part be explained by the fact that just 49.4 percent of the state’s total population live in urban areas, according to the 2010 United States Census. Just one other state — Vermont — has fewer city-dwellers.

The smallest state in the country is also one of the most expensive to live in, with median home values and homeowners insurance premiums both well above the national average. Rhode Island is also the only state on the list which counts hurricanes as the most commonly declared natural disaster. Though the state has just 25 recorded national disasters in the past sixty-seven years, over a third of them have been hurricanes.

Own a mobile home and still need homeowners insurance? Learn everything you need to know about manufactured home insurance.

Check out some of the best insurance bundles out there.

At the heart of the aforementioned Tornado Alley, Kansas is one of the states with the most tornadoes yearly. In fact, according to data from the National Oceanic and Atmospheric Administration (NOAA), only Texas had more recorded tornadoes between 1991 and 2010. This is certainly one of the reasons that the Sunflower State has the fifth-highest homeowners insurance premiums in the country, even though median home values in Kansas are nearly 40 percent less than the national average.

Since 1953, Oklahoma has experienced 210 natural disasters, including 105 fires. Additionally, the state has a property crime rate of twenty-eight per 1,000 residents, which is well above the national average of 22 per 1,000. Both of these facts might help explain why Oklahoma’s homeowners insurance premiums are fifty-five percent greater than the national mean, despite the fact that it has the fourth-lowest median home values in the country.

It should be noted that according to the III, Texas’ home insurance policy forms differ from standard forms, leading to artificially high premiums. Nevertheless, the Lone Star State does take the number three spot on the list. Even if the state adhered to standardized policy forms, it’s likely that Texas still would have some of the highest homeowners insurance premiums in the country. Texas recorded an astonishing 155 tornadoes from 1991-2010 — fifty-nine more than any other state in the country. It also has a violent crime rate and property crime rate exceeding the national mean.

Florida has seen forty-four hurricanes since 1953, and it contains three of the ten coastal counties in the country that have been the most hit by hurricanes since 2008 according to III. But surprisingly, hurricanes are not the most common natural disaster in Florida. That honor actually goes to fires, of which there have been sixty-five since 1953. In fact, the most recently declared disaster in Florida was a wildfire. The blaze, which was started after a man failed to fully extinguish a fire in his backyard, burned 59 homes and 343 acres of land in May of 2020.

Louisiana’s median home value of $166,565 is one of the ten lowest nationwide, and yet the state has the highest homeowners insurance premiums in the country. Perhaps this isn’t any surprise, considering the state’s location adjacent to the Gulf of Mexico makes it a frequent target of hurricanes. Louisiana was the site of the most notorious natural disaster of the 21st century: Hurricane Katrina, which caused nearly 2,000 deaths and $108 billion dollars worth of damage. That hurricane is just one of twenty-seven that have hit the Bayou State in the last 67 years.