Americans of all generations have flocked back to cities in 2021, with the return led by Millennials and Gen Z. As urban areas grow more popular again, these are the cities in each state with the most to offer the nation’s youngest members of the workforce.

After a long pandemic-induced slumber, U.S. cities have begun to buzz once again. Some longtime residents are returning to the place they called home, while others are looking to start their careers in a new city. Though the spread of the highly transmissible COVID-19 Delta variant may influence these trends, most U.S. cities are currently experiencing a population influx, an increase especially driven by the country’s youngest generations.

Many characteristics make a city appealing, but young workers typically seek out different qualities than their more experienced colleagues. For one, young professionals have not yet reached their peak earning years, so affordability is paramount. A healthy economy is also particularly important for workers seeking early-career job opportunities. Plus, easy commutes via walking, biking, or taking public transportation are attractive options for residents who do not yet have the disposable income for a car.

Beyond these practical considerations, young people also tend to enjoy a city’s entertainment and nightlife options more frequently than their older counterparts, and often demonstrate a high level of interest in the size of the local dating pool.

Any city in the U.S. can be someone’s perfect home, but certain metropolitan areas offer opportunities that are more likely to appeal to younger residents. With this in mind, data scientists at Insurify crunched the numbers to identify the best place for young professionals in every state. 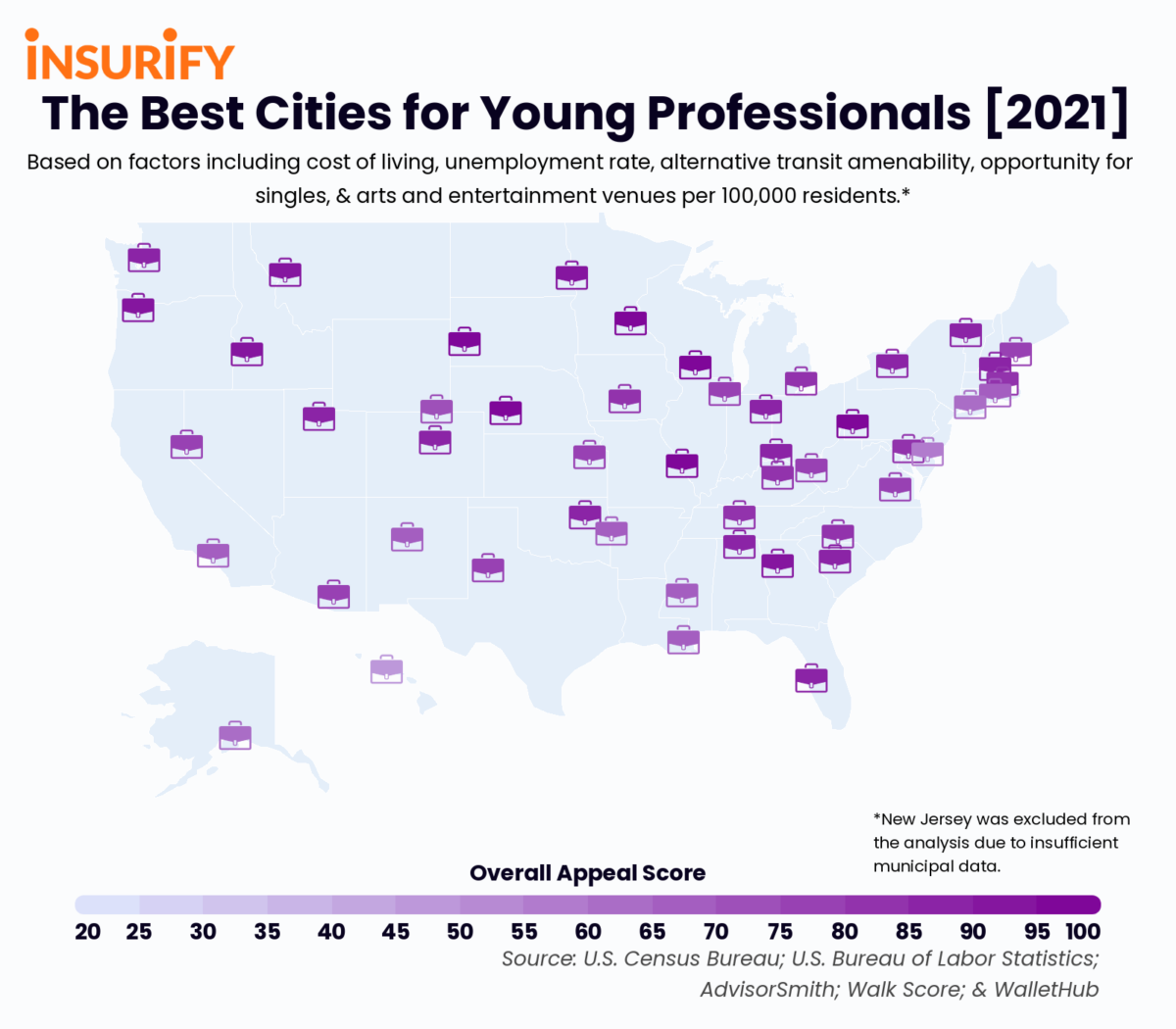 Across the 134 U.S. cities evaluated, the average Overall Appeal Score was 64 out of 100. Cities were rated by Insurify’s data science team using a proprietary scoring algorithm on factors including cost of living; unemployment rate; ease of alternative transit; the number of arts and entertainment establishments per 100,000 residents; and the number of dating opportunities for singles. A higher score indicates a greater prevalence of favorable factors, such as abundant alternative transportation options, low cost of living, or a low unemployment rate. 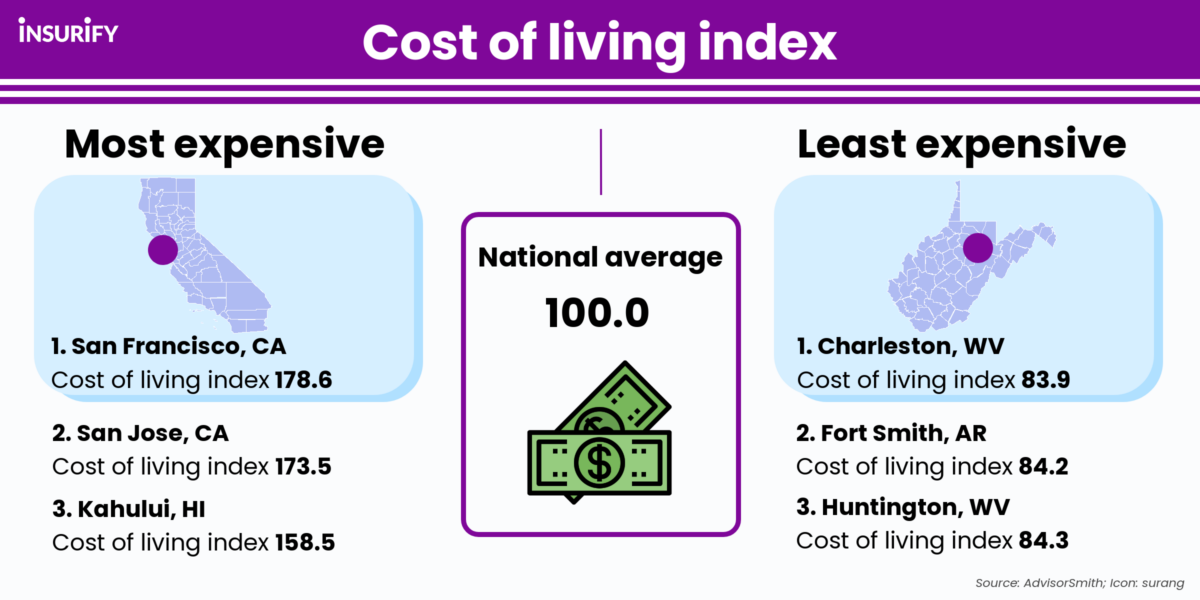 According to the most recent data, San Francisco, California is 79 percent more expensive to live in than the average American city, making it the most expensive metropolitan area in the country. Charleston, West Virginia is the cheapest city considered in this study; Charleston is 16 percent less expensive than the average city. 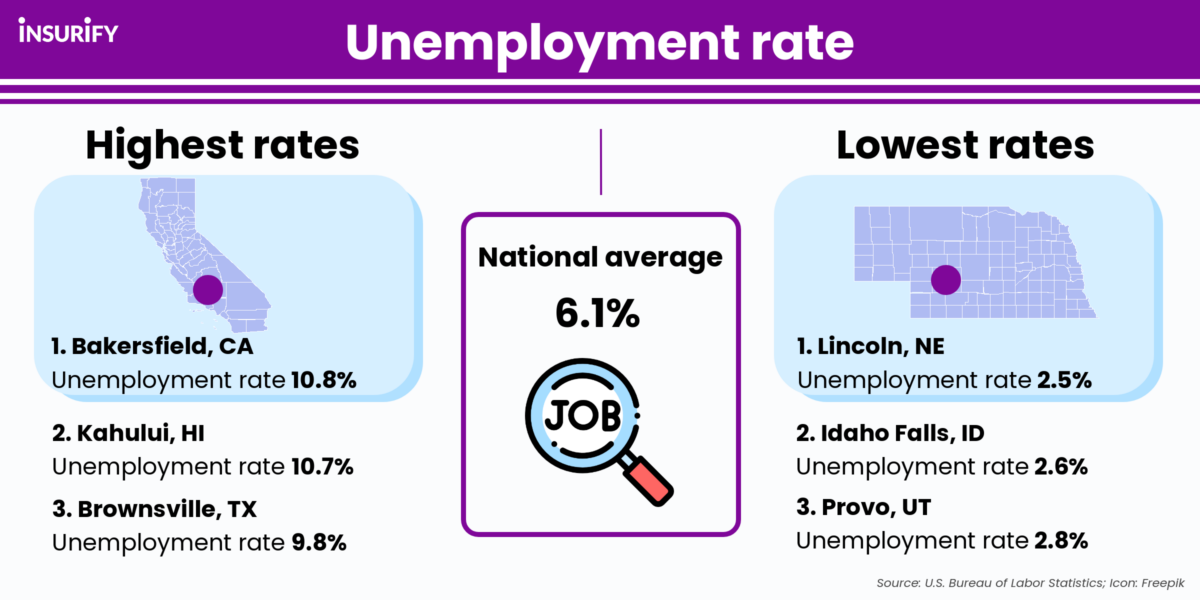 The unemployment rate in the United States is 6.1 percent, as of June 2021. Bakersfield, California has the highest unemployment rate of all cities considered, according to the U.S. Bureau of Labor Statistics. Its rate of 10.8 percent is 1.8 times higher than the national average. Lincoln, Nebraska, meanwhile, has the lowest unemployment rate, and also ties for the top overall spot in the rankings. 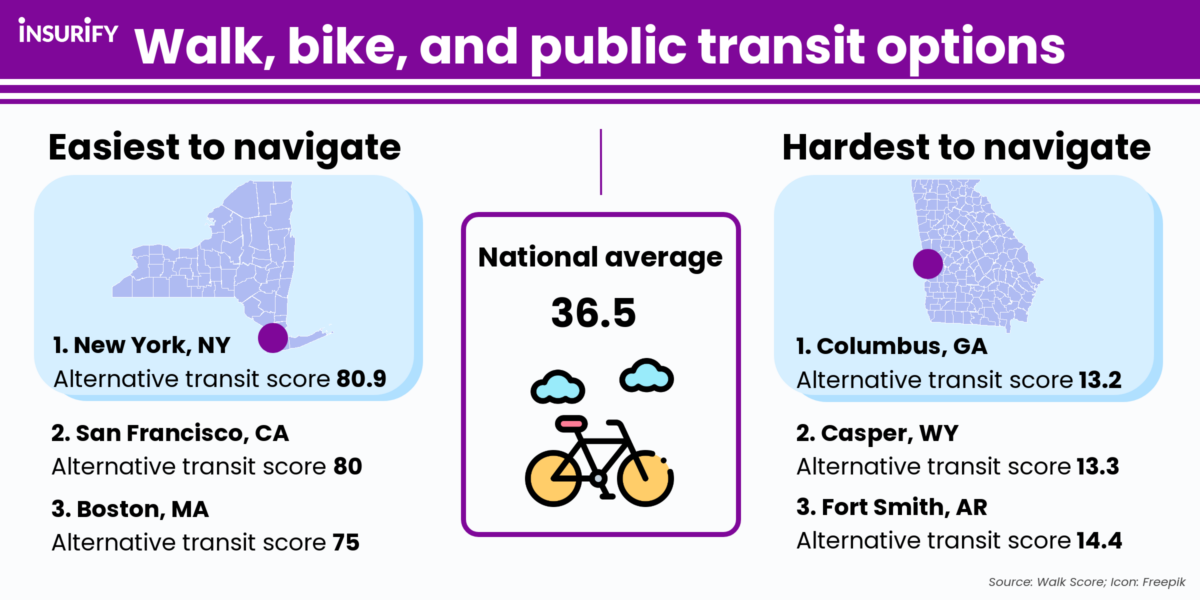 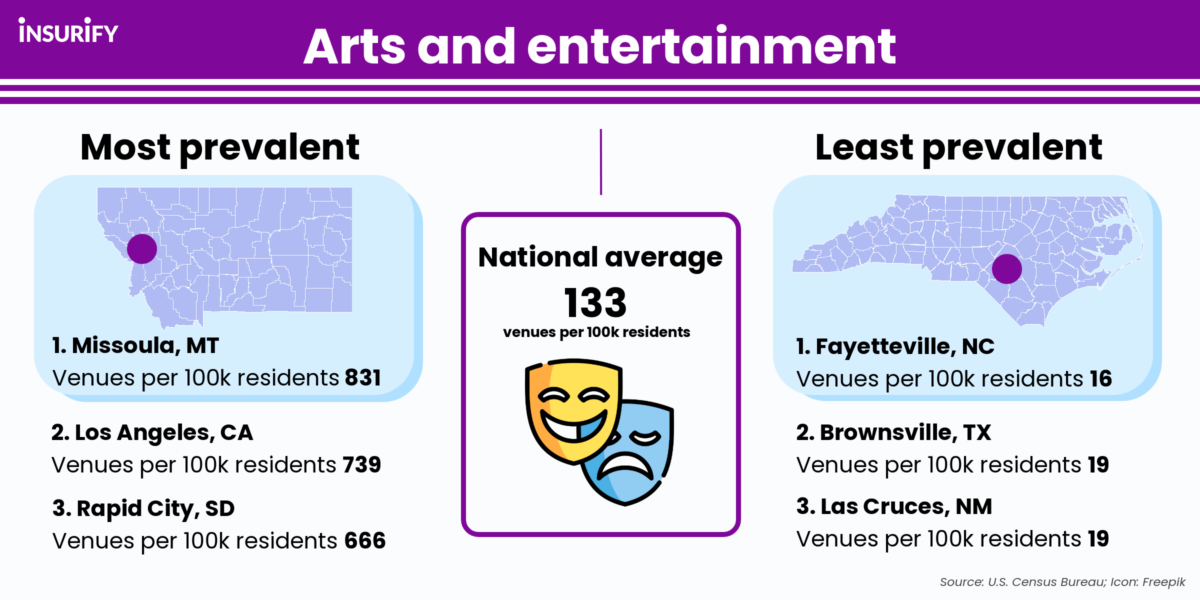 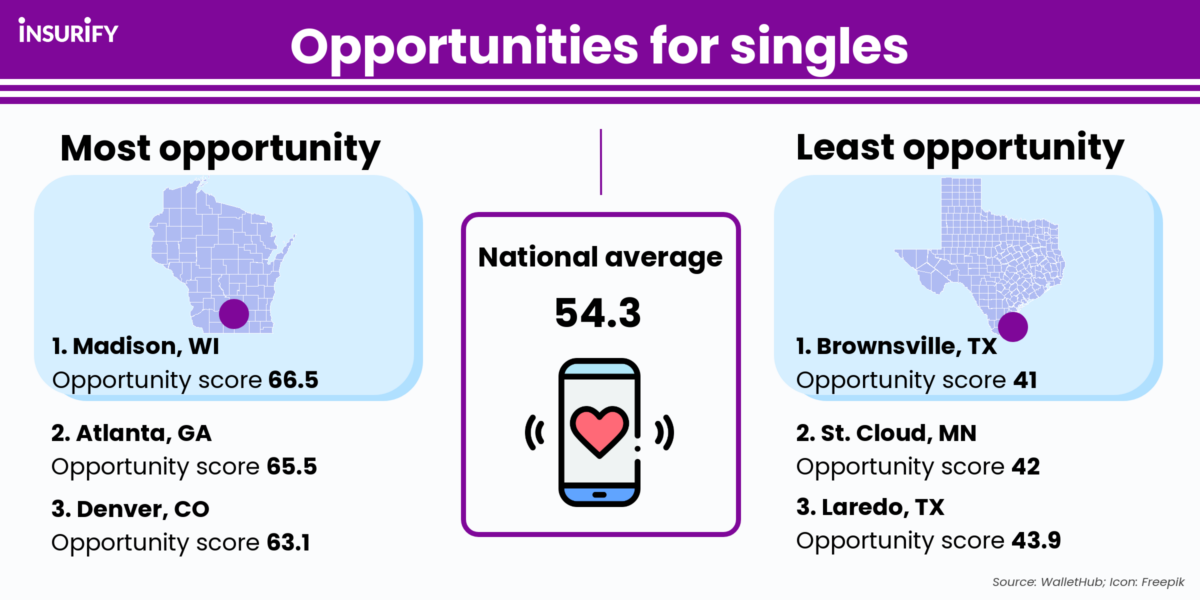 Across all cities, the average opportunity score for singles is 54.3. With an opportunity score 22 percent higher than the national average, Madison, Wisconsin is the best American city for single adults. Atlanta, Georgia and Denver, Colorado round out the top three, while Brownsville, Texas ranks last overall in economic, recreational, and dating opportunities afforded to singles.

The data science team at Insurify, a site to compare auto insurance quotes, referred to publicly accessible data to identify the best city for young adults in each state. Cities were ranked based on a composite score of factors including cost of living; unemployment rate; ease of alternative transportation; the number of arts and entertainment establishments per 100,000 residents; and opportunities for singles.

Cost of living data come from AdvisorSmith’s City Cost of Living Index, which rates U.S. metropolitan areas by how expensive they are when compared to the national average (standardized to a value of 100). Six major categories of household expenses—food, housing, utilities, transportation, healthcare, and consumer discretionary spending—are weighted and aggregated to produce a single index value for each city. Unemployment rates come from the U.S. Bureau of Labor Statistics’ latest metropolitan area data on the subject.

Walk Score develops yearly rankings on how easy American cities are to traverse by walking, biking, or taking public transportation. Insurify data scientists averaged these three rankings for each city to create a single alternative transit metric. Data on cities’ arts and entertainment establishments per 100,000 residents were taken from the U.S. Census Bureau’s most recent economic census for arts, entertainment, and recreation. Each metropolitan area’s total number of venues was compared against the U.S. Census Bureau’s most recent estimate of that area’s population. Lastly, opportunities for singles data come from WalletHub’s “Best and Worst Cities for Singles” ranking, which evaluates cities’ appeal to unmarried Americans based on economic, recreational, and dating opportunities.

New Jersey was excluded from this analysis due to insufficient municipal data.

The Best Cities for Young Professionals, 2021

Reviewed by
Andrew Huang
Director of Analytics
Andrew leads data analysis at insurify.com, and he has formerly led data analysis projects at kayak.com and realtor.com. Andrew strives to help people save money on their insurance, and in his free time he loves finding great deals on travel flights. Insurify's network bidding algorithms and Kayak's flight trends are personal favorite projects.
Read more from Andrew Huang
Insights>Best Cities For Young Professionals 2021