Law enforcement’s impact on our lives is at the forefront of national conversation following protests across America. With this in mind, we look to law enforcement’s role on America’s roads. 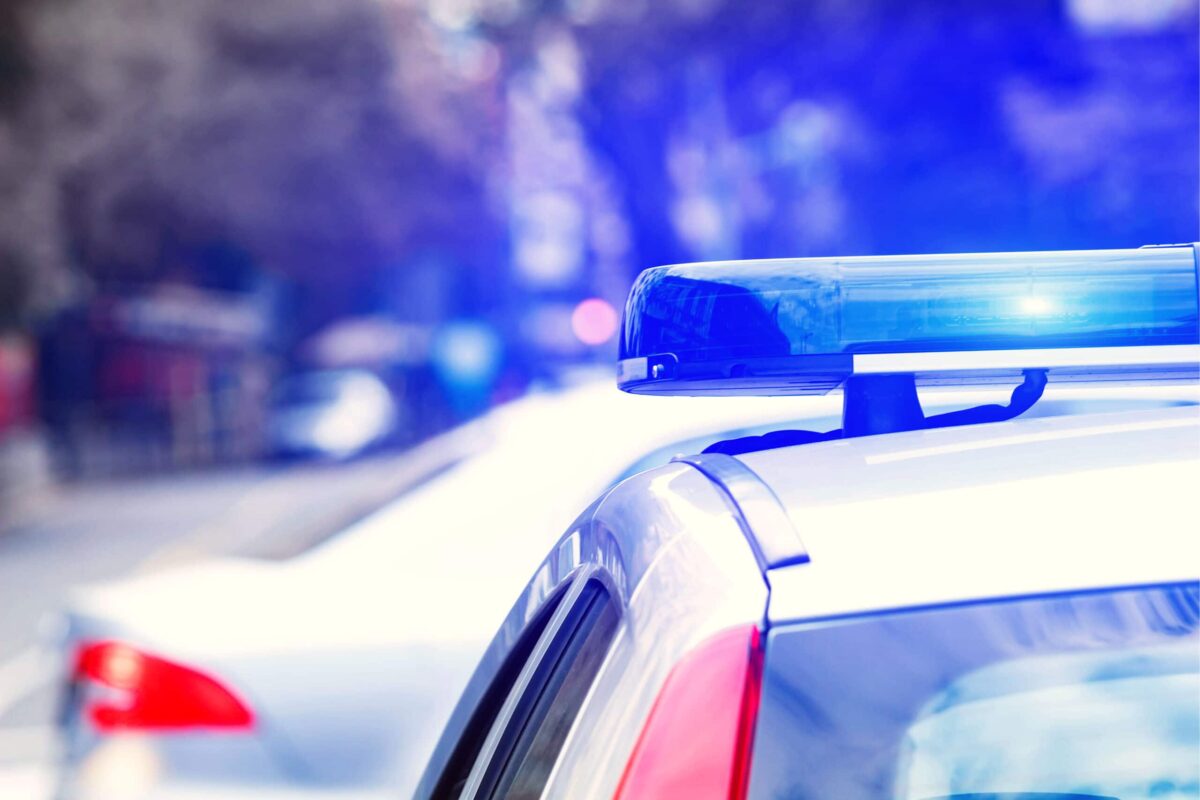 Past research has presented conflicting evidence regarding the efficacy of police presence to maintain road safety. While some studies demonstrate that more police activity leads to better behavior on the roads, others reveal no such association.

Some research has found that police activity on the road increases road safety—but only to an extent, and usually relating only to drunk driving. A ten percent increase in DUI arrests was associated with a one- to two-percent reduction in drunk driving crashes, all other factors accounted for. 1 Other studies have failed to establish an association at all, finding no evidence that increased traffic enforcement reduces the incidence of crime, driving violations, or accidents, nor that punishment for particular violations has any effect on rates of offending. 2

What’s more, another study argues that traffic ticket issuance has a clear economic motive: for every 10 percent decrease in a municipality’s revenue, traffic ticket issuance in that municipality increases by about 6.4 percent, 3 and remains elevated even after revenue increases again. With such a tenuous connection between traffic enforcement and good driving behavior, what’s the purpose of ticketing in the first place?

The data science team at Insurify delved further into the relationship between traffic safety and police forces, referring to their database and to external sources.

This analysis found no relationship between the density of police officers, the rate of enforcement for driving offenses, and traffic fatalities. In this examination, it was neither the case that states with higher levels of traffic violations and vehicle deaths were assigned larger relative police populations, nor that states with more enforcement see fewer deaths. No significant correlations between these factors were identified. 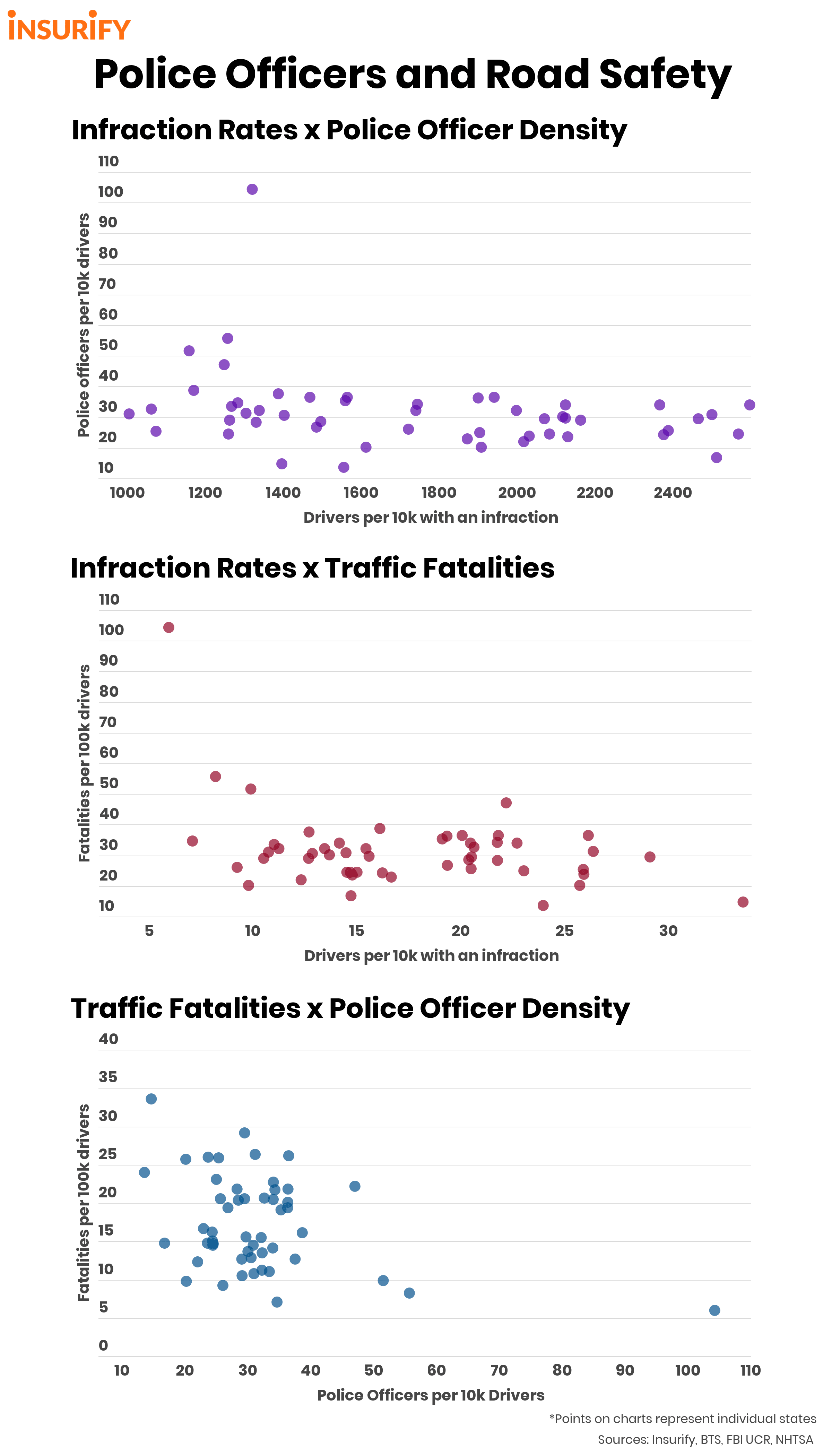 To determine the relationship between traffic incidents and police officers by state, the data and research team at Insurify, an auto insurance quote comparison platform, conducted a correlational study analyzing the density of police officers, frequency of traffic fatalities, and rate of traffic violations by state.

The latest state-based traffic fatality statistics on rates of traffic deaths per licensed driver and per million miles traveled were gathered from the State Traffic Data report, released by the National Highway Traffic Safety Administration (NHTSA). Traffic fatality rates were also compared with the density of police officers by state and with statewide infraction rates, to determine any relationship between the density of law enforcement officers, the rate at which drivers are charged with driving offenses, and traffic safety outcomes.

This table illustrates the statistical relationship between the density of police officers and rates of driving offenses by state. Driving offenses are listed in order of the frequency in which they occur.

Find all the cheap auto insurance Kentucky has to offer using Insurify.

Our experts weigh in on auto insurance Utah residents can trust.

This table illustrates the statistical relationship between the density of police officers by state and traffic fatality rates by state.

A statistical analysis of the relationship between police officer density and traffic fatality rates by state reveals no significant correlation between the two. Simply put, the numbers suggest that traffic fatalities are independent of law enforcement’s presence on the roads, at least on a state-by-state basis.

Buckle your seatbelt: cheap insurance in Texas is a breeze to find with Insurify.

Cheap car insurance can be hard to find in the Palmetto State. Our guide lays out the top auto insurance companies South Carolina residents should know about.

This table illustrates the statistical relationship between traffic fatality rates by state and driving offenses by state. Driving offenses are listed in order of the frequency in which they occur.

Hear from our experts on finding the cheapest car insurance in Michigan.

There’s cheap car insurance Florida residents can take advantage of — if they know how to find it. Luckily, Insurify makes doing so all too easy.

While Insurify’s study of nationwide figures on policing and traffic safety found no notable correlations between the ratio of law enforcement officers to drivers, the rate at which drivers are convicted of moving violations, and the number of annual motor vehicle fatalities, this is just a preliminary analysis. With the intent to initiate wider conversations about the outcomes of policing on our roads as well as in our cities, we acknowledge the need for additional research on this subject matter. Here is a sample of the limits inherent in this study as well as future research directions that could clarify the relationship between officers, the laws they enforce, and public safety.

[3] Red Ink in the Rearview Mirror: Local Fiscal Conditions and the Issuance of Traffic Tickets