Over the past year, drivers in these nine states have stood out in many noteworthy ways, but not necessarily for all the right reasons. 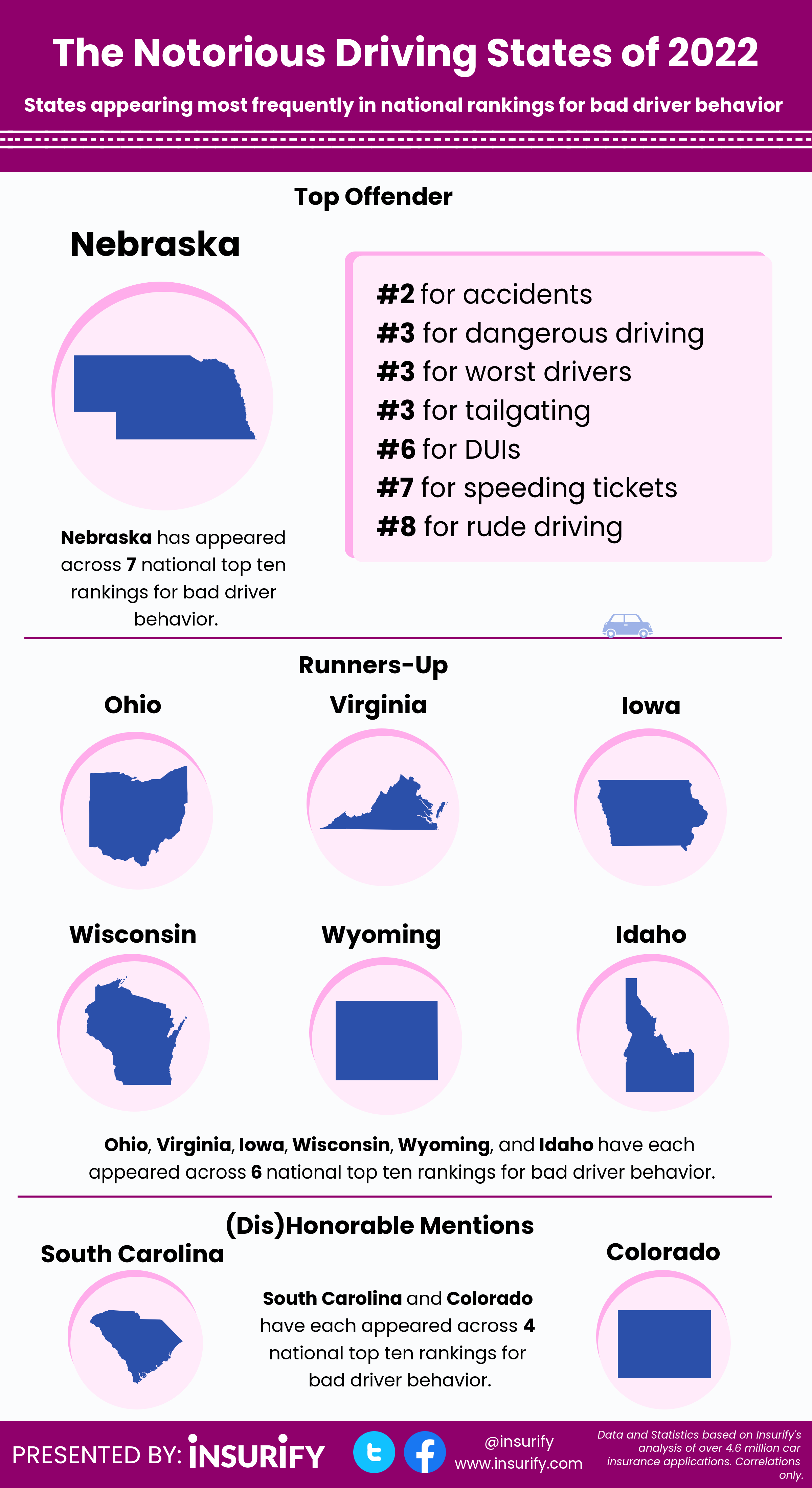 It’s no secret that drivers in certain parts of the U.S. have notorious reputations amongst their peers on the road. Decrying other states’ drivers as categorically the worst is an unofficial national pastime that even the most kindhearted motorists can admit to indulging in, whether the accused drivers deserve the flack or not.

Drivers in some states may be more heavy-footed on the gas pedal, while drivers in other states are more prone to collisions or driving under the influence. There are certain states, however, where drivers tend to find themselves at fault for a variety of driving infractions more frequently than most. To identify the most notorious driving states of 2022, the data scientists at Insurify looked back across their eight state-level rankings of various bad driving behaviors in 2021 to see which states made the biggest name for themselves.

The data scientists at Insurify, a site to compare auto insurance rates, referred to their database of over 4.6 million car insurance applications to round up the most notorious states for driving in 2022. Drivers submit information including their state of residence and any prior moving violations on their record within the past seven years when applying for car insurance. Over the past year, Insurify has published eight studies identifying the top ten states whose drivers are the biggest culprits across the following measures: speeding tickets, DUIs, rude driving, street racing, tailgating, accidents, dangerous driving, and having the worst drivers overall.

The states that appeared most frequently across these eight rankings were identified as the most notorious states for driving in 2022. The “Notorious Nine” fall into three tiers based on the number of times each state ranked within the top ten nationwide across the eight studies: (Dis)Honorable Mentions (four times), Runners-Up (six times), and the Top Offender (seven times).

Which state has the worst drivers?

Nebraska’s drivers are notoriously violation-prone, from accidents and speeding tickets to tailgating and DUIs. Other states whose drivers are cited most frequently for breaking the rules of the road include Colorado, Idaho, Iowa, Ohio, South Carolina, Virginia, Wisconsin, and Wyoming.

Compare auto insurance quotes with Insurify and see how much you could be saving on your premium!

Compare auto insurance quotes with Insurify and see how much you could be saving on your premium!

Finding cheap car insurance in Florida is easier than it seems, especially when you can compare quotes from multiple providers all in one place. Enter, Insurify.

Everything’s bigger in Texas, including the savings on your premium when you compare quotes with Insurify. Cheap Texas car insurance is only a few clicks away!

How do I find the cheapest car insurance in Georgia? Peach State drivers can get the best quotes in minutes by comparing with Insurify.

Insurify’s experts wrote the guide to getting cheap auto insurance in South Carolina, so Palmetto State drivers can stop overpaying for coverage ASAP.