Battle of the Sexes: The “Male Penalty” in Car Insurance 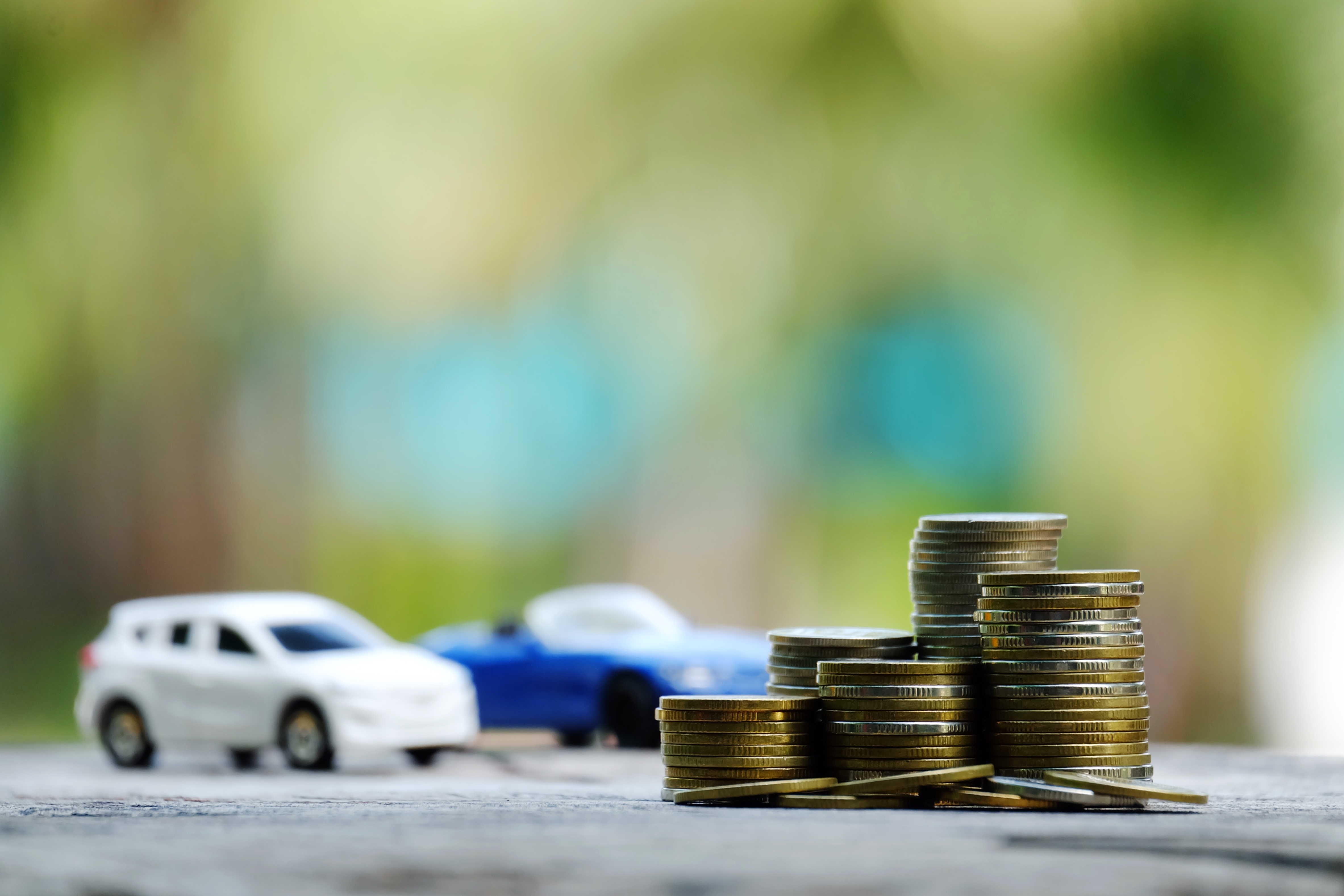 Sugar and spice and the price is nice! Women pay less, on average, for car insurance than men, but by how much?

In all but six states nationwide, it is legal to incorporate gender into automotive insurance rate pricing. Defenders of these policies will argue that this is for good reason. According to the Facts and Statistics: Highway Safety report by the Insurance Information Institute, male drivers are involved in fatal accidents at a rate that is 1.5 times the national average and nearly 3 times the rate of women. However, detractors will argue that these risks are not individualized, but drawn from generalizations, which renders them unfair.

Regardless of the fairness of this policy, men pay more than women for car insurance in nearly all states in the country. To find the best car insurance so that this penalty doesn’t break the bank, here is the status of gendered pricing across the nation according to Insurify.

How Much More Do Men Pay?

As a result of this increased risk in insuring male drivers, providers charge men rates that are an average of 3 percent more expensive than policies that are for otherwise identical female drivers. However, with certain providers in certain states, the figure can average as high as 41 percent. Quote discrepancies that extreme quickly amount to a substantial financial burden on male drivers, which is why it is vital to compare auto insurance quotes regularly to help drivers save money on coverage.

States Without a “Blue” Tax

Fairness in individual quote pricing across men and women isn’t solely a grassroots cause. In fact, six state legislatures—those in California, Hawaii, Massachusetts, Montana, North Carolina, and Pennsylvania—outlawed the use of gender as a factor in determining auto insurance rates. While insurers in these states can no longer assume that male drivers will be costlier to insure, they are still covering the same statewide risk pool as before. As a result, while men in these states saw their costs go down, women—especially young women—received an increase in the price of their insurance.

State by State: How Much More do Men Pay than Women on Average? 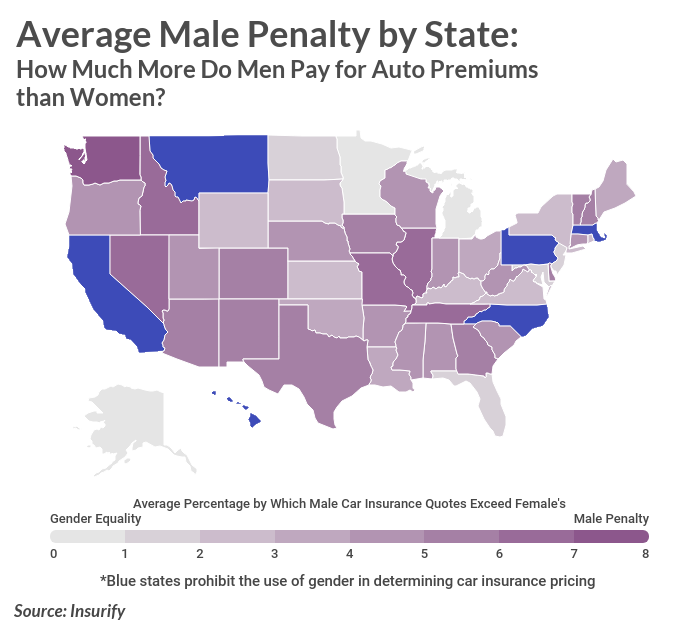 While American men pay an average of 3 percent more than women for premiums, there is a range in this gender gap between states. 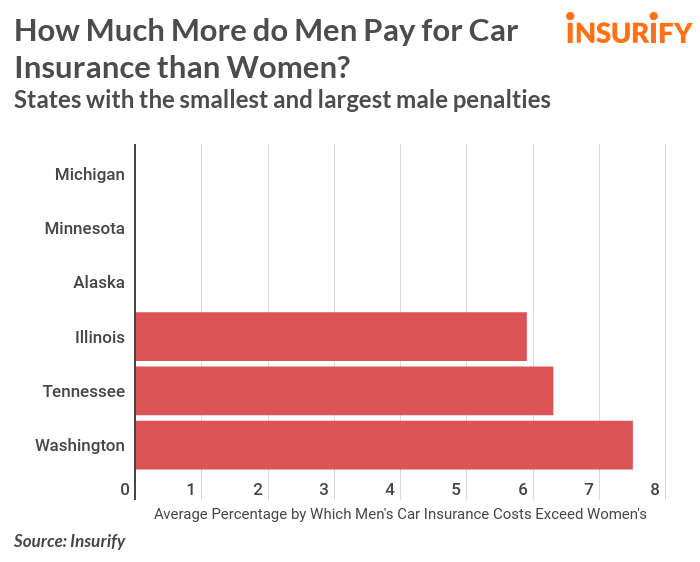 The states on the low end of the spectrum—Michigan, Minnesota, and Alaska—have essentially no gender gap whatsoever across insurance companies’ rates. That being said, despite its status as already having a virtually nonexistent gender gap nationwide, the state government just banned the use of non-driving factors in determining Michigan car insurance prices in a bipartisan reform deal. Once the changes go into effect in July 2020, the Great Lake State will join the six others that currently disallow gendered quoting.

On the high end of the spectrum, male drivers in Washington can expect to pay an average of 8 percent more than otherwise identical female motorists, though this disparity can be as high as 30 percent for some insurers.

How do the Major Players Stack Up? 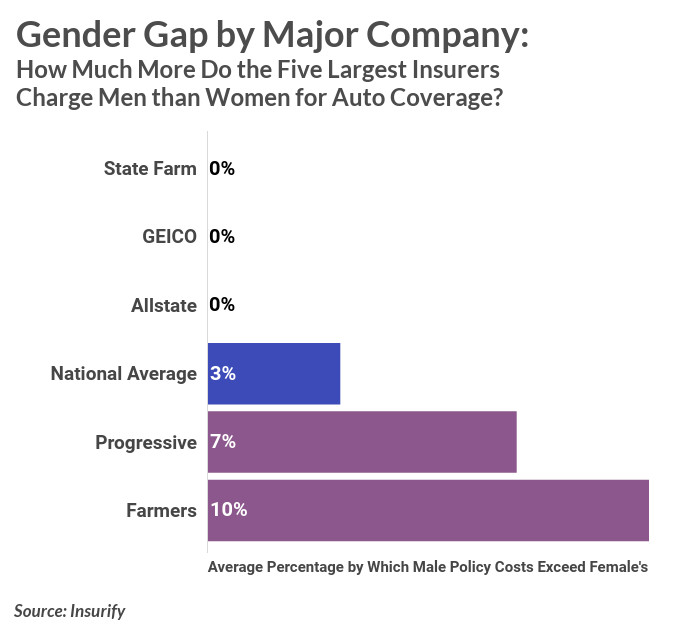 Interestingly, the five largest insurance providers demonstrate a noticeable spread in terms of gendered pricing gaps. State Farm Insurance, one of the companies without a male penalty, is also the cheapest of the major insurers in 28 states—more than the next two largest providers combined. However, a male driver with both a clean record and a premium from Progressive Insurance or Farmers Insurance could opt for user-based insurance to avoid some or all of this gender gap. By agreeing to install a telematics system in their car to monitor day-to-day driving patterns including the time the vehicle is in use, speed, and driving behavior, motorists can have the cost of their premium based on their personal driving risk and not on their gender.

Which Insurers Practice Equality of the Sexes?

All hope is not lost for male drivers looking for non-gendered car insurance premiums. At the moment, many separate auto insurers impose no penalty on men in comparison to women with the same driving record. Many are state-based as opposed to nationwide, but with nearly 100 of them, there is a decent chance that at least one will write policies in most parts of the country.

It is important to keep in mind that the statistics relayed in this report are based upon sample profiles and that quoting may vary for certain individuals. Not only that, but the company with the smallest gender gap still may not be the most affordable option for male drivers. The only way to truly find the best deal is to use the best insurance comparison sites to compare quotes across multiple providers. Luckily, there are many auto insurance comparison services that will do the work of researching them on shoppers’ behalf.

Struggling to decide which car insurance is best for you? Compare auto insurance with these top comparison services.

Bundling auto and renters insurance is one of the best ways drivers can save on total insurance costs.

If you have a history of driving violations, learn about the options for car insurance for bad driving record.

How much is car insurance? Learn about average rates by age, geography and driving history.

If you are a homeowner, strongly consider the bundles for auto and home insurance quotes.

To determine which auto insurance companies are the most affordable deal for car owners, the data science team at Insurify explored quoting information from their database of over 1.6 million auto insurance applications as well as from public filings. The quotes displayed here are based on aggregations of sample rates for four driver profiles that included varied gender, age, driving history, credit, marital status, prior insurance, higher education, employment, and military service.

Data Attribution
The information, statistics, and data visualizations on this page are free to use, we just ask that you attribute any full or partial use to Insurify with a link to this page. Thank you!
Updated July 30, 2021