In each state, there’s always that one particular city whose drivers are notorious for their rude behavior. 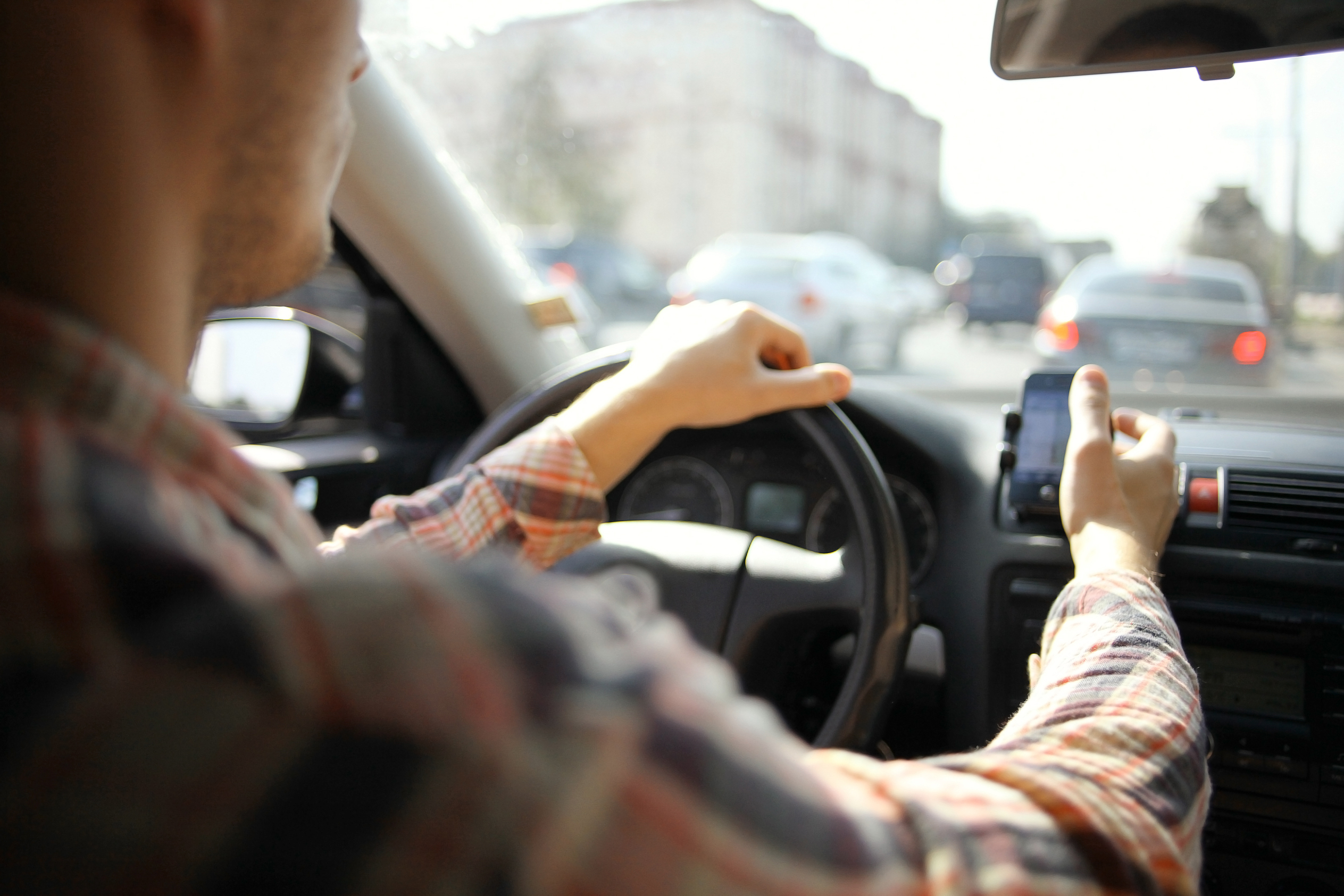 Driving in the city is no easy feat. From dodging cyclists and pedestrians to sitting through never-ending congestion, urban driving presents unique challenges that can make even the most seasoned drivers nervous. Not only are these stressors commonplace in urban environments, but they can lead to impatient or irate drivers who lose their restraint and engage in rude behavior on the roads, ranging from cutting off another driver or pedestrian to a hit-and-run. No matter the infraction, one thing is for certain: this rude behavior behind the wheel is disrespectful, dangerous, and even sometimes life-threatening.

While rude driving rates vary by state, it’s no secret that there are plenty of drivers across the country who are not only impolite but also endanger the lives of others with their inconsiderate driving habits. Curious to see which city boasts — or, unfortunately, hosts — the rudest drivers in each state, the research team at Insurify consulted their database of over 4 million car insurance applications. 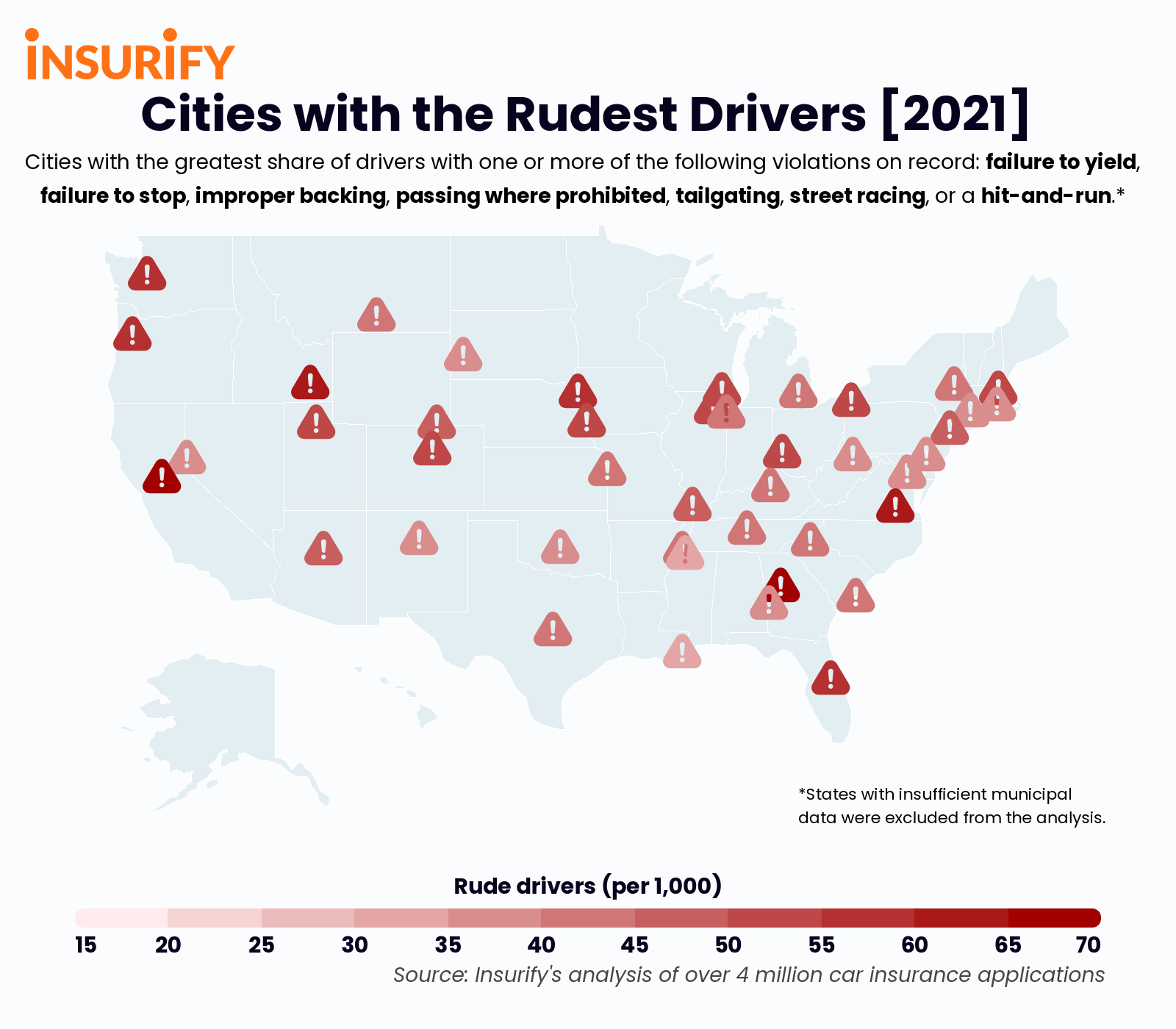 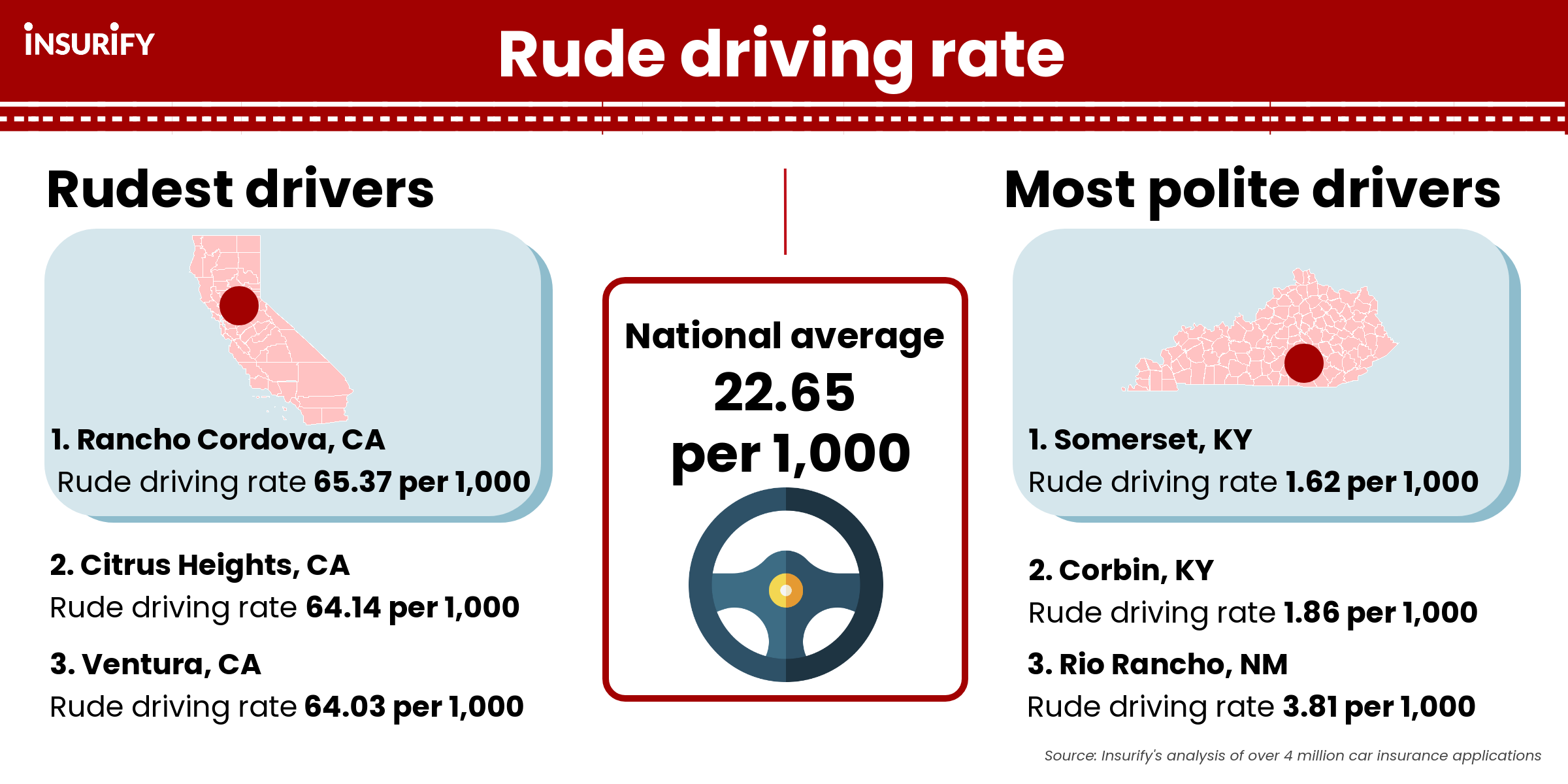 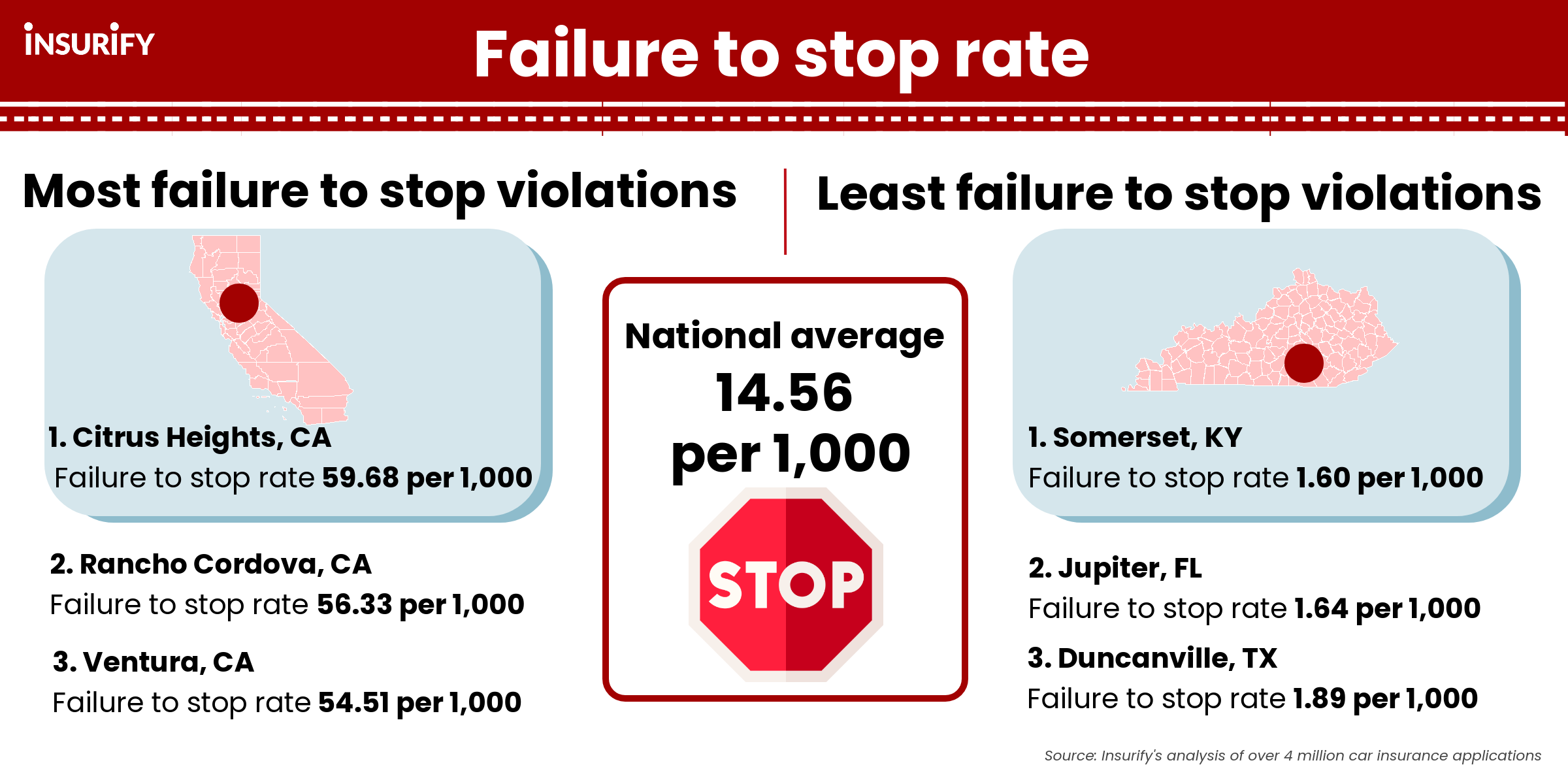 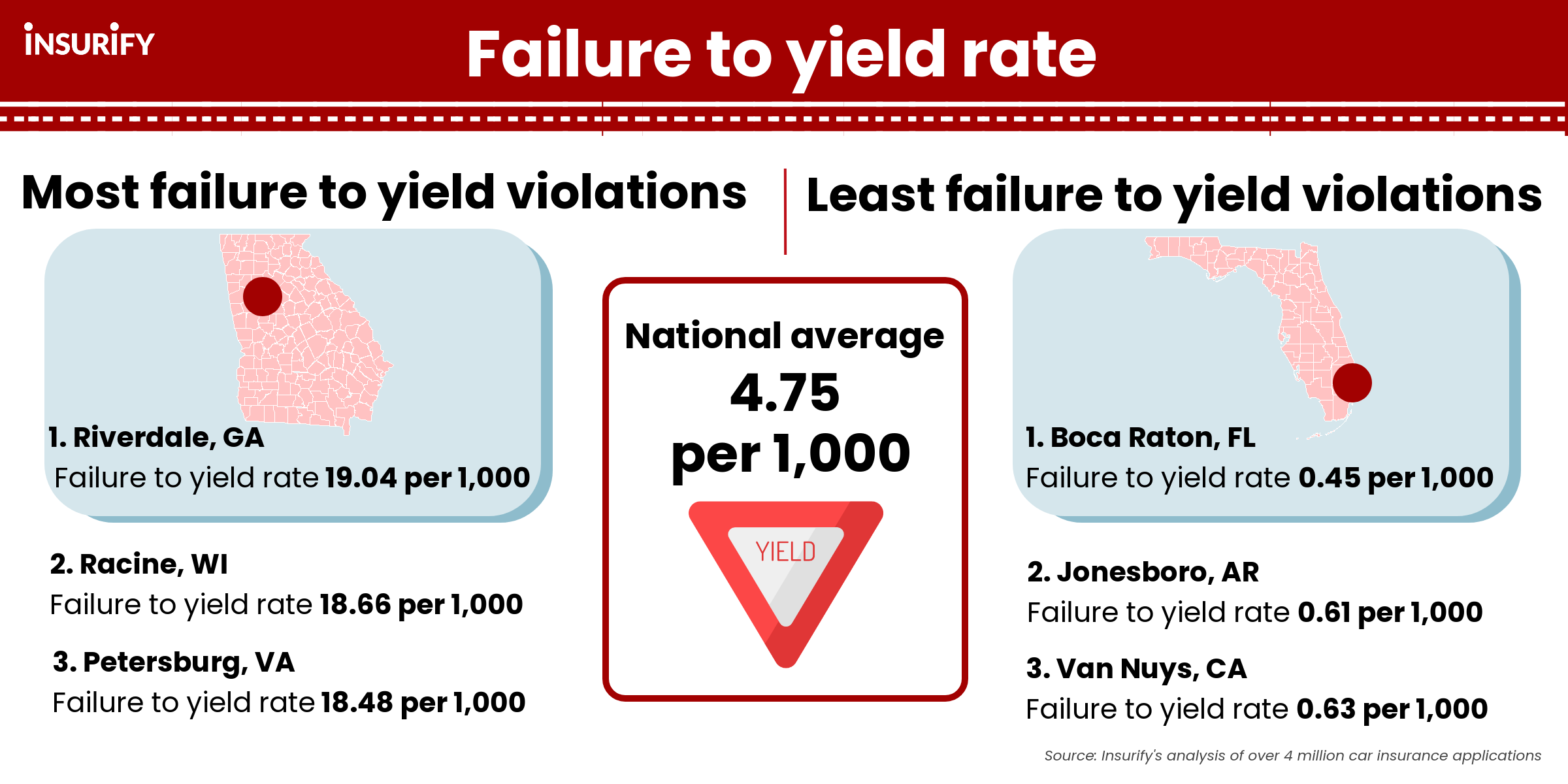 The data scientists at Insurify, a site to compare auto insurance rates, referred to their database of over 4 million car insurance applications to identify the city with the rudest drivers in every state in 2021.

To determine the rudest cities in the nation, Insurify’s data scientists calculated the share of drivers with one or more rude violations on their driving record in 869 U.S. cities. The city with the highest share of drivers with these violations in each state was identified as the city with the rudest drivers for its respective state. States with insufficient municipal data were excluded from the analysis (Alaska, Hawaii, Maine, Minnesota, New Hampshire, North Dakota, and Vermont).

The city with the rudest drivers in America is Rancho Cordova, CA. As of 2021, an average of 65.37 per 1,000 drivers there has been cited at least once for rude behavior on the roads. The most common “rude” driving violations in the nation are failure to stop and failure to yield. Street racing, hit-and-runs, and tailgating are also examples of rude driving.

The Rudest Driving Cities by State

Compare car insurance quotes online in real-time with Insurify and see how you can save on your premium today.

Find cheap car insurance in Kentucky by comparing personalized quotes on Insurify.com. Major savings are only a few clicks away!

Where can I find cheap car insurance in Utah? Beehive State drivers are in luck, because Insurify’s experts wrote the guide to paying less for auto insurance in UT.

For Lone Star drivers, getting cheap car insurance in Texas is made easier when you let Insurify compare personalized quotes to find the best option for your wallet. Compare and see how much you could be saving today!

To find the cheapest car insurance quotes in Michigan, let Insurify take the legwork out of finding the best rate by comparing all your options for you.

Looking for cheap auto insurance in Florida? Insurify’s got drivers in the Sunshine State covered to help insure your vehicle without breaking the bank.

Savings as sweet as (peach) pie! Insurify’s got all of the best options for cheap auto insurance in Georgia when Peach State drivers compare online.

Reviewed by
Andrew Huang
Director of Analytics
Andrew leads data analysis at insurify.com, and he has formerly led data analysis projects at kayak.com and realtor.com. Andrew strives to help people save money on their insurance, and in his free time he loves finding great deals on travel flights. Insurify's network bidding algorithms and Kayak's flight trends are personal favorite projects.
Read more from Andrew Huang
Insights>Cities With The Rudest Drivers 2021