In these cities, the value of a typical home saw great heights in 2020. 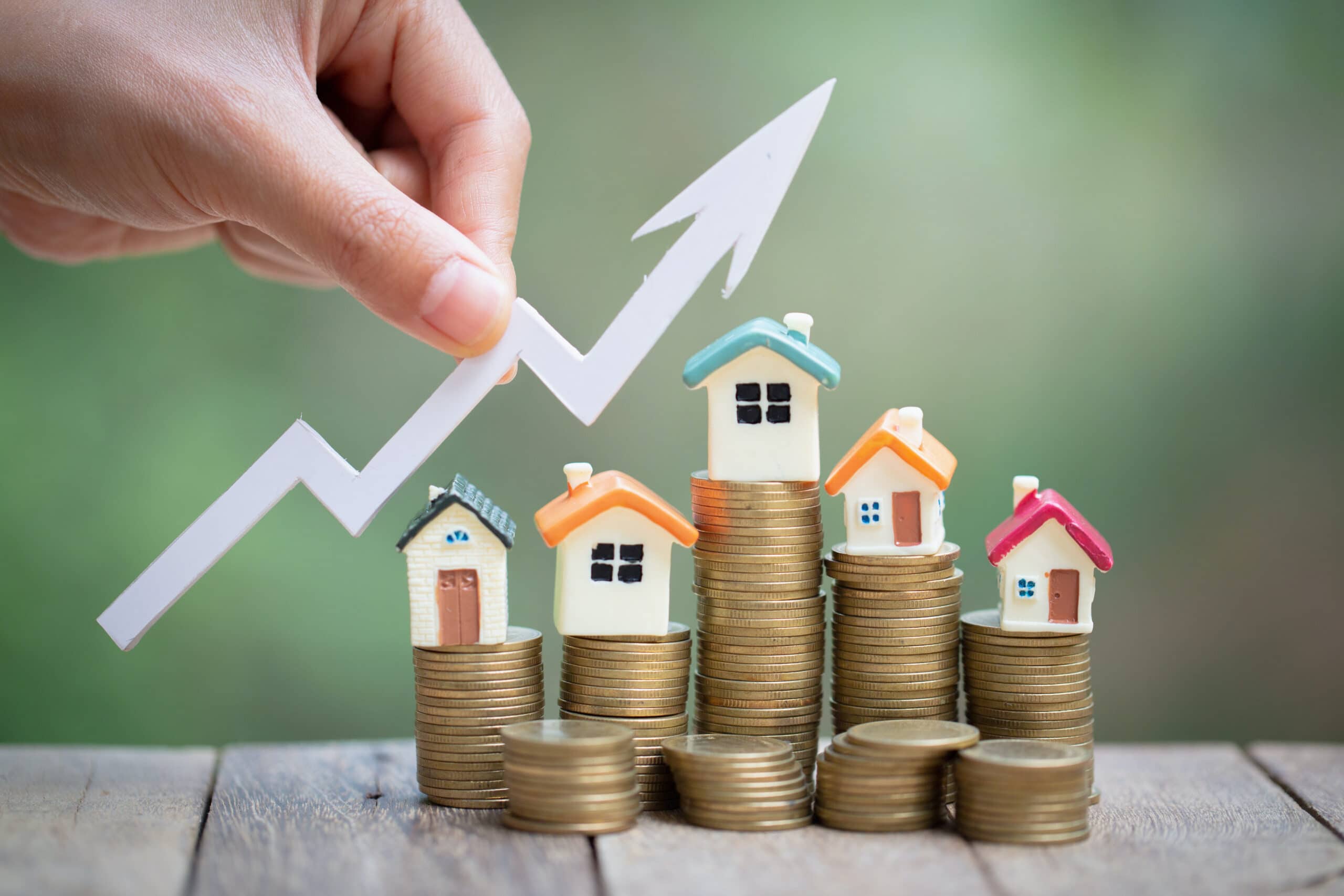 It would be an understatement to say that 2020 has given us a lot to look back on. The unique circumstances of this year, primarily shaped by the coronavirus pandemic and its resulting changes to our everyday lives, have had interesting and somewhat surprising effects on real estate markets across the nation.

Our relationship to home has certainly intensified in 2020, as shelter-in-place orders have kept us inside more than ever. Likewise, across the country, housing markets have witnessed the effects of these policies: Insurify’s analysis on cities with the greatest pandemic real estate booms found that between April and July 2020 across metropolitan areas in the United States, the average rate of home sales month to month was up overall, at 14.89 percent, exceeding the previous year’s rate by 66 percent (the average rate of home sales month to month was 5.21 percent in 2019). More and more potential homeowners have been relocating to the suburbs in unprecedented droves, because having a larger living space rather than being close to the center of action in a city has become a higher priority for many during the pandemic.

The housing market in 2020 has shown that despite dire economic circumstances, people have demonstrated a piqued interest in investing in a home, particularly in more affordable areas. In order to understand how the shifting priorities of home buyers have shaped the real estate market this year, the research team at Insurify examined data from Zillow to identify the cities with the most significant surges in home values in 2020. 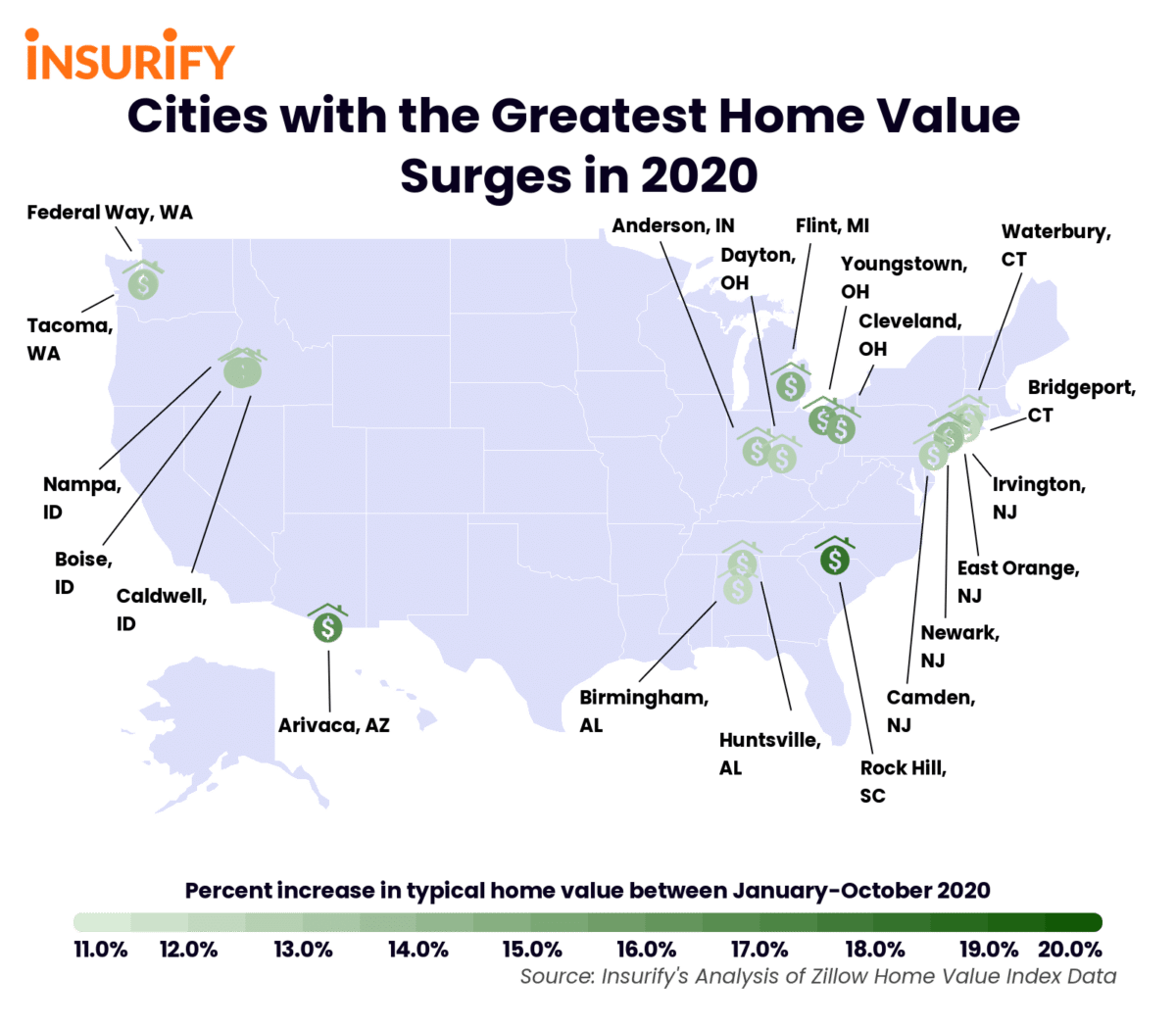 The research team at Insurify, a site to compare home insurance rates, examined public data from Zillow to identify the cities with the greatest increases in home values in 2020. Zillow publishes monthly estimates, called the Zillow Home Value Index (ZHVI), of smoothed, seasonally adjusted measures of the typical home value (in the 35 to 65th percentile range) and market changes across a given region and housing type. Insurify’s analysts examined city-level ZHVI estimates across all available months in 2020 and calculated the percent change between January and October 2020, the most recently available month, for every city included in the data.

Using city-level population estimates from City-Data.com, Insurify’s analysts selected all regions in the Zillow database that have a population of at least 50,000, per the U.S. Census Bureau’s definition of an urban area. Within this subset, the regions with the greatest relative increase in home value between January and October 2020 were identified as the cities with the greatest home value surges this year.

What city in America has the largest home value rise in 2020?

Cities with the Greatest Home Value Surges in 2020

Insurify’s comparison tool can point you to the cheapest home insurance in Texas, so Lone Star State homeowners can get the best protection for the best price.

The best homeowners insurance in Arizona is just a few clicks away – let Insurify do the comparing for you, and insuring your house in the Copper State will be easy as can be!

Golden State residents, Insurify’s got you covered for finding the cheapest homeowners insurance in California. Start protecting your home today, at a price your wallet will love.

Wondering how to find the best homeowners insurance in North Carolina? Tar Heel State homeowners need to look no further because Insurify is the one-stop shop for finding the policy that is best for your budget.

Getting the cheapest home insurance in New York made easy with Insurify. Compare and find the best rate for your home today!

Life made even peachy-er with Insurify’s guide to getting cheap homeowners insurance in Georgia. Start comparing and see how much you can save on your homeowners policy!

It feels like the sun shines brighter when you know you’re saving money. Insurify can help you find the cheapest home insurance in Florida, so even sunnier days are in store for Sunshine State homeowners.