Make and Break: Five Auto Brands with the Most Car Accidents 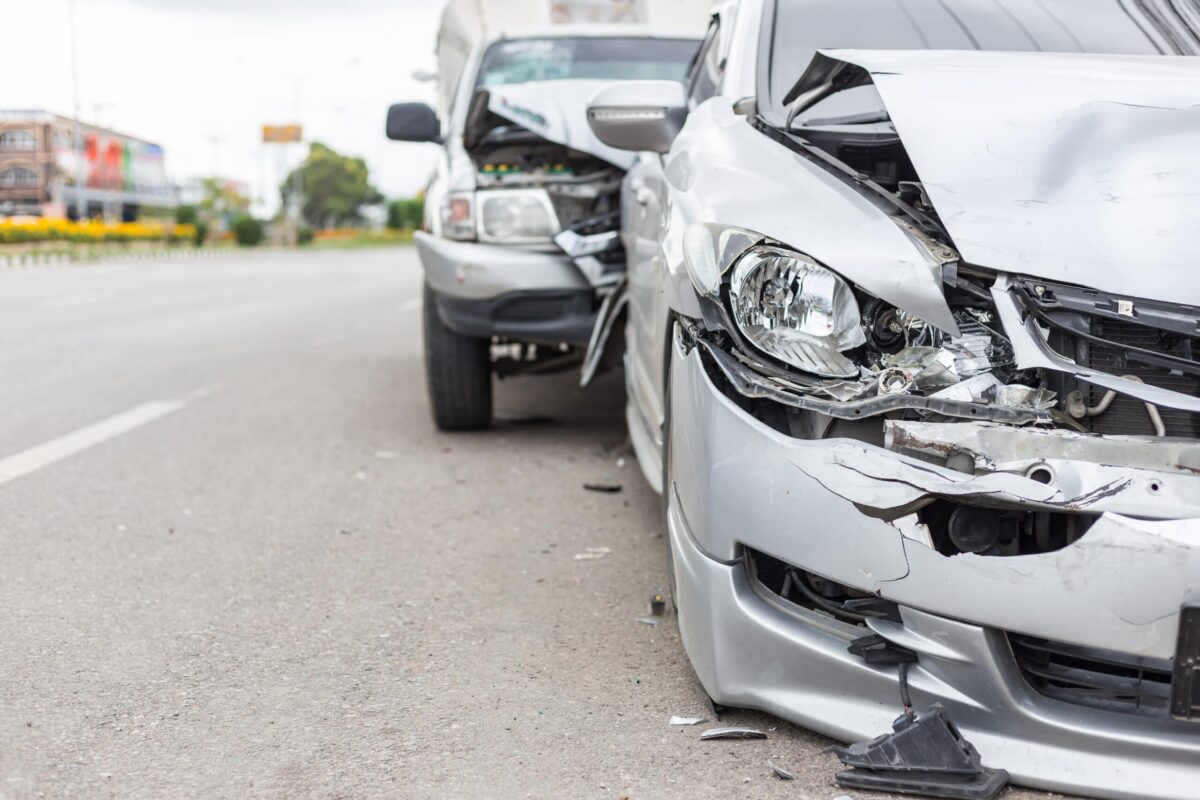 Accidents can happen to anyone, but some drivers are more prone to them than others. According to the data, accident-prone drivers tend to favor a few major auto brands; and they may not be the ones you expect.

Traffic fatalities are on the rise, despite having steadily declined over the past decade. Over 38,000 people in the United States died from motor vehicle accidents in 2020, according to the NHTSA (National Highway Traffic Safety Administration). This represents a 7 percent increase from 2019. Though the causes for this shocking rise are not entirely clear, NHTSA analysis suggests that Americans increasingly adopted dangerous driving behaviors like speeding, cell phone usage, and failing to wear a seatbelt in 2020. Car accident injuries and deaths rose throughout the year, even as Americans drove fewer miles overall while sheltering at home in the midst of the COVID-19 pandemic.

It goes without saying that getting into a car crash is one of the most dangerous things a driver can experience on the road. Even if all parties involved are fortunate enough to avoid personal injury, an auto accident still often means filing a police report and going through a claim process with an insurance company. An adjuster will have to get involved, and insurers will usually raise the at-fault driver’s rate. Drivers who are frequently involved in accidents can also have their driver’s license suspended or revoked.

Across the United States, about 11 percent of Americans have an at-fault motor-vehicle crash, from a fender bender to a serious incident, on their driving record. Data scientists at Insurify have already determined that accident rates vary significantly by car model. But do these differences still hold up when comparing car brands? To identify which auto brands have the highest proportion of accident-prone drivers, Insurify’s data science team analyzed its database of over four million car insurance applications. 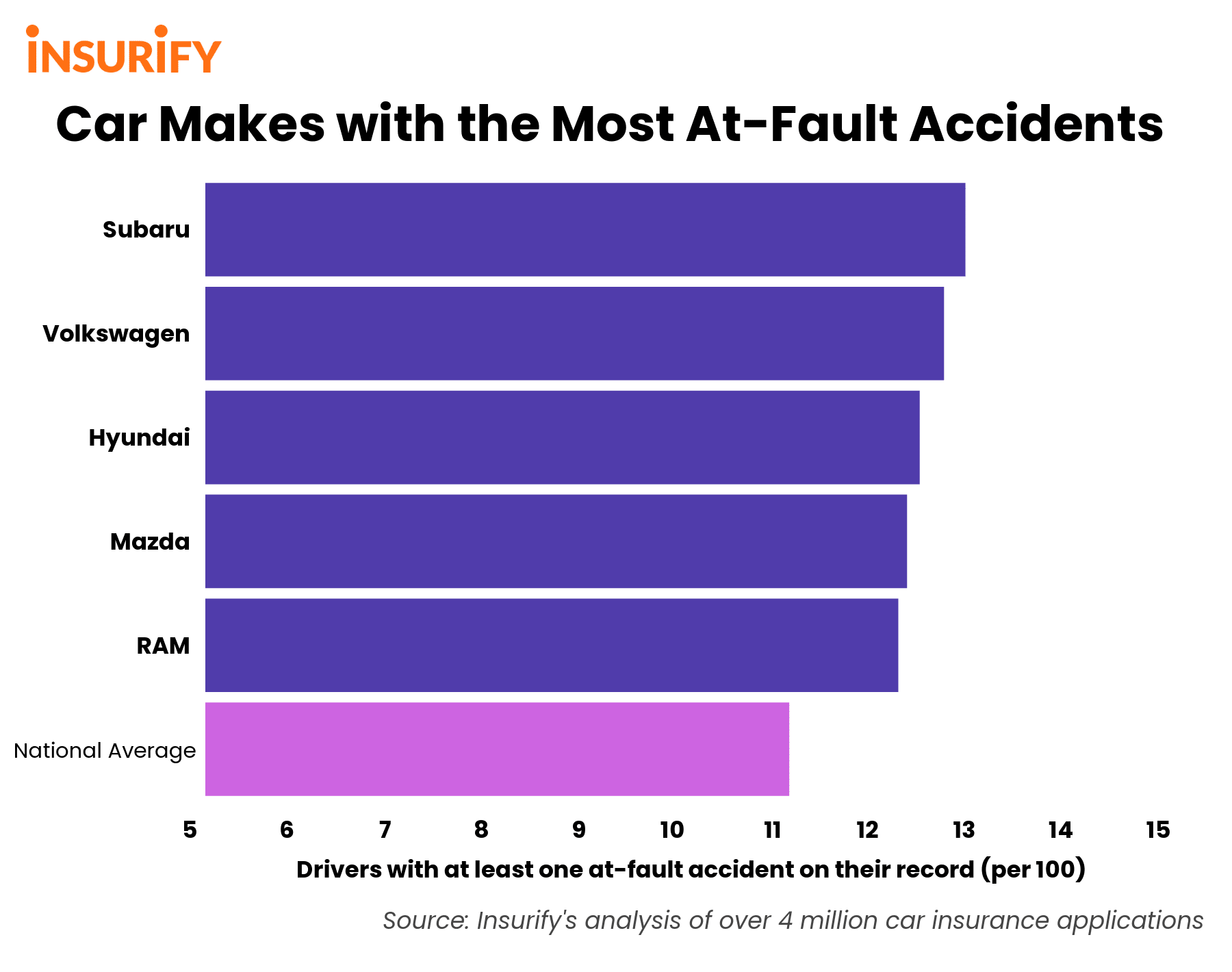 To identify the car makes with the most at-fault accidents, data scientists at Insurify, a site that helps users compare auto insurance rates, referred to their database of over 4 million car insurance applications.

Which Car Brands Have the Most At-Fault Accidents?

Top 5 Automotive Brands with the Most Car Accidents

Known for its heavy-duty pickup trucks, RAM starts off the list of the top five car makes with the most accidents. RAM drivers are over 10 percent more likely than average to report an at-fault collision on their record. Among all RAM models, the RAM 2500 is the “worst offender,” with RAM 2500 drivers causing accidents 25 percent more often than the national average. RAM motorists are a tad reckless across the board, however, as RAM is the only brand on this list with all its models having at-fault accident rates above average. The RAM 1500 Tradesman, RAM’s “most careful” model, still has an at-fault collision rate one percent higher than the national average.

The best insurance comparison sites in 2021, according to our team of experts.

Cheap coverage, no deposit. Find out how to get instant auto insurance with Insurify.

Bundle up. Learn how you can save when purchasing auto and renters insurance from the same carrier.

Well-regarded for sharp styling, mechanical reliability, and an overall sporty feel, the Japanese Mazda brand provides a different sensibility than many other auto makes. Both RAM and Mazda drivers have a trait in common, however: lots of at-fault accidents. Overall, Mazda drivers are 11 percent more likely than the national average to report a motor vehicle accident on their record. Mazda CX-3 drivers are the brand’s worst offenders, causing accidents 34 percent more often than the average. Mazda 626 motorists are much safer, with a brand-low accident rate that is 28 percent less than the national average.

Hyundai drivers have the third-highest share of at-fault accidents in the nation, compared to drivers of other car manufacturers. Based in South Korea, Hyundai produces cars recognized for their reasonable price and reliability, but it seems that not all Hyundai drivers are as reliable behind the wheel. This is particularly true for the brand’s worst offender—the Hyundai Genesis Coupe—a sporty, performance-oriented departure from their standard models. Drivers of this model have an accident rate that is a startling 39 percent higher than the national average. Many Hyundai models, however, have drivers with below average accident rates. This group is led by the Hyundai Equus, whose drivers are 37 percent less likely than average to cause an accident.

Looking car and home insurance quotes? Find them all in one place with Insurify and choose the plan that’s best for you.

Can you get car insurance without a license? Short answer: yes! Read to find out more.

Options for everyone. Period. Find the best car insurance for bad credit with Insurify.

Volkswagen produces a wide range of vehicles respected for their craftsmanship, performance, and uniquely German design sensibility. These qualities have made the brand attractive to many drivers, including, apparently, those prone to misadventures behind the wheel. Overall, Volkswagen drivers cause a motor vehicle collision 14 percent more often than the national average. Volkswagen’s Golf R—a speedy “hot hatch” model—is the brand’s worst offender, with its drivers a full 37 percent more likely than average to cause an accident. On the flip side, the manufacturer’s “most careful” drivers prefer the Volkswagen Routan, which boasts an accident rate nearly 26 percent lower than the national average.

Though the brand is better known for its easygoing and outdoorsy reputation, Subaru is the car brand with the most accidents. Its drivers cause motor vehicle collisions at a rate over 16 percent higher than the national average. The brand’s worst offender is the Subaru WRX, which has an accident rate a whopping 48 percent above average, making it one of the 10 most accident-prone models of any brand in the country. This finding dovetails with other research from the Insurify data science team, which also found the Subaru WRX to have the highest speeding ticket rate of any U.S. car model. Not all Subaru drivers are reckless, however. The Subaru Tribeca is the brand’s “most careful” model, with Tribeca drivers causing accidents at a rate 26 percent lower than the national average.