Enter your zipcode to get started

Get Back to My Quotes
Compare vs Insurify
Loading...
4 Insurify Car Insurance Comparison

Are you curious about how common car accidents really are? Always wondered about the most common causes of crashes, or just how much the rate of accidents varies from state to state or city to city? Read on to learn more in Insurify’s comprehensive guide to car accidents: how they happen, how often they happen, and where.

On average, there are 6 million car accidents in the U.S. every year. That's roughly 16,438 per day. (TheWandering RV)

If learning more about fender benders inspires you to find a better car insurance policy––you’re in luck! Insurify users can compare and purchase dozens of car and home insurance quotes from the nation’s leading insurers and save up to $996 yearly.

You may be surprised by how much the rate of car accidents varies from state to state and city to city. While some states have embraced smart urban planning and technologies that help to keep both drivers and pedestrians safe, others have lagged behind and see greater rates of crashes as a result. 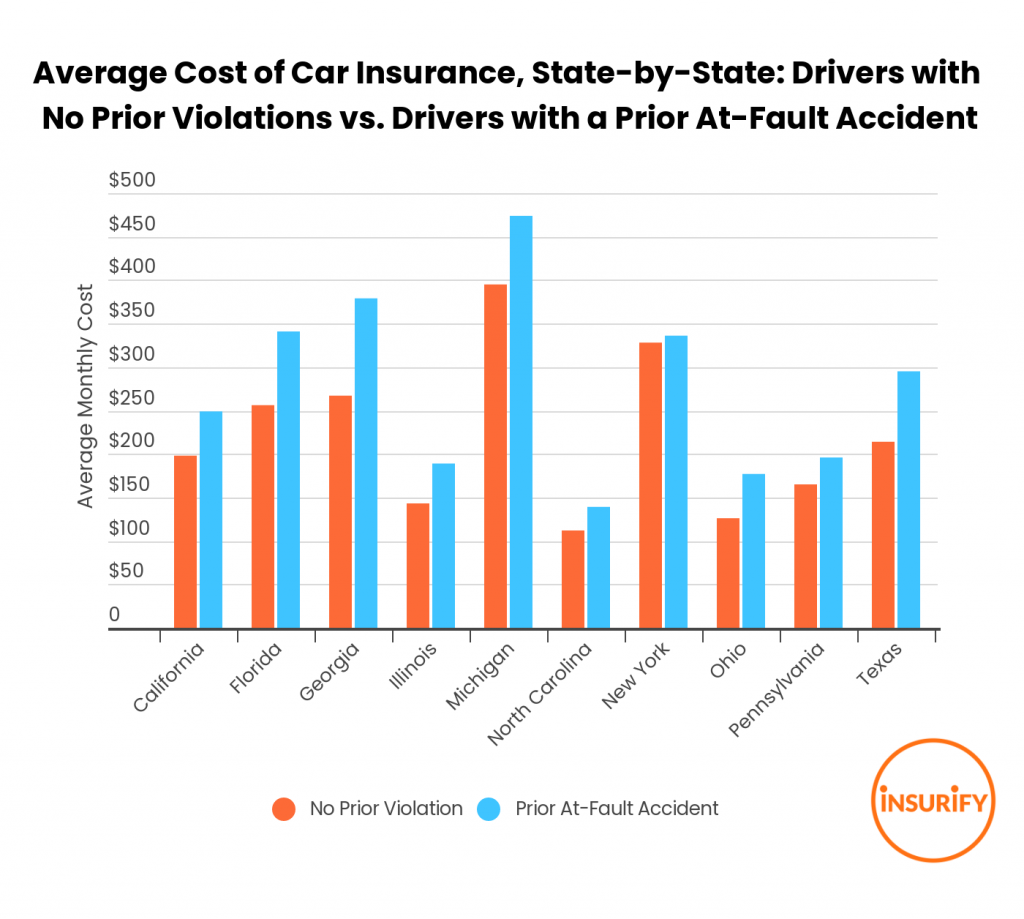 The graphic below uses proprietary Insurify data to compare the average cost of car insurance for drivers with clean records and drivers with prior offenses in eleven major U.S. cities. 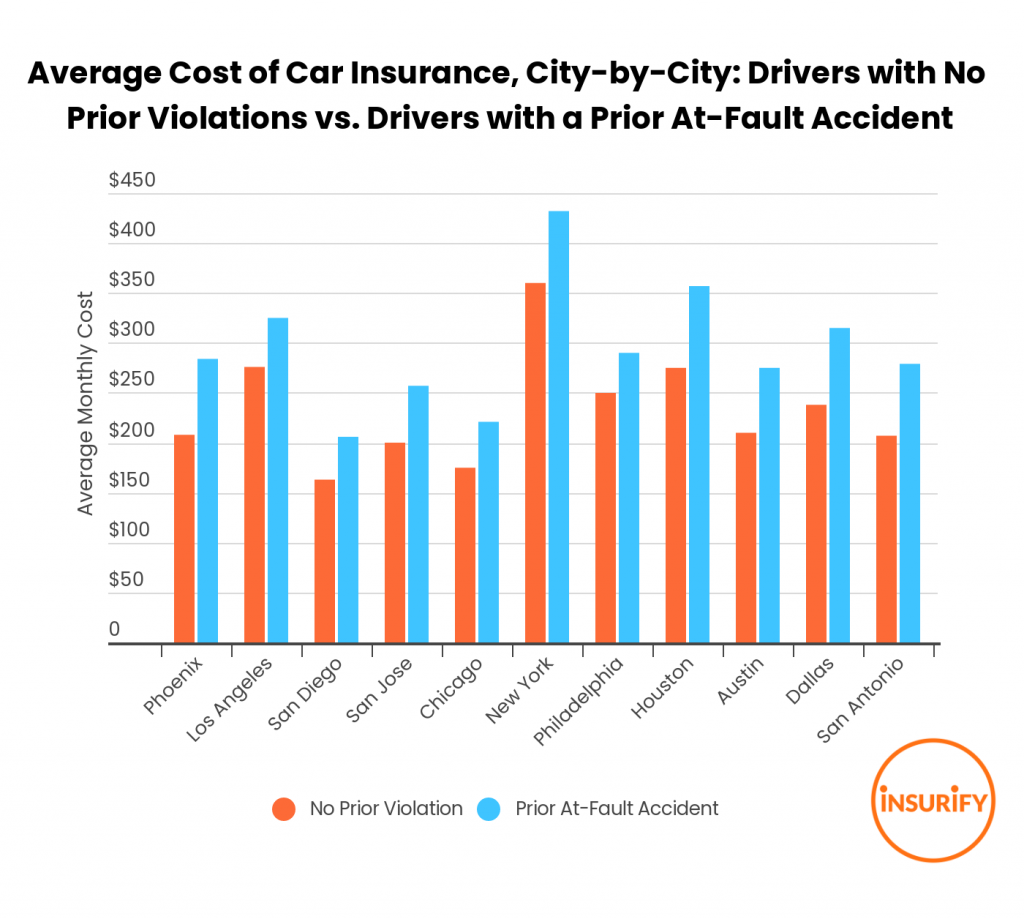 Nationwide Statistics on Car Accidents in the United States

The graphic below uses proprietary Insurify data to compare the average cost of car insurance for drivers with clean records and drivers with prior offenses from 2019 to 2021. 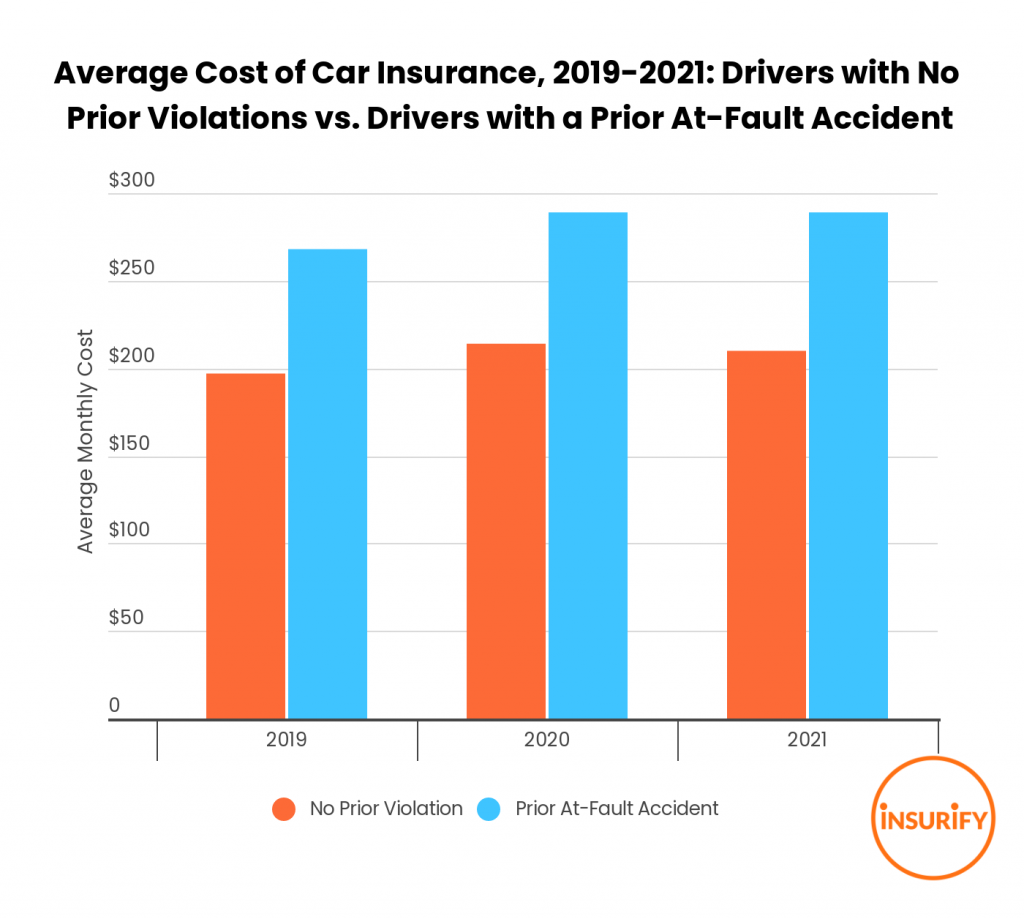 The Cost of Car Accidents in the United States

Safety Measures to Prevent Accidents in the United States

Car accidents aren’t just a problem in the states. The negative impact of car crashes impacts societies and economies across the globe.

You may have heard cliches about teens or senior citizens not always making the soundest choices behind the wheel. But are those stereotypes earned?

The graphic below uses proprietary Insurify data to compare the average monthly cost of car insurance when segmented by driver age. 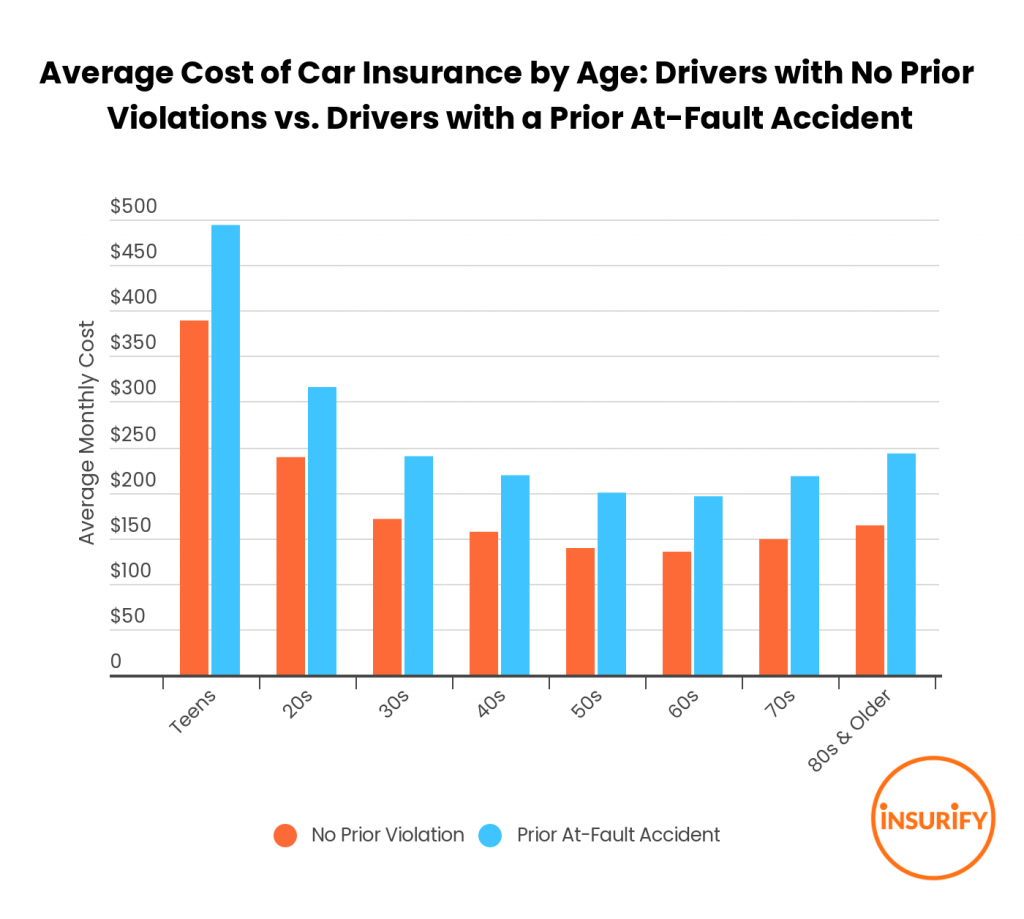 The graphic below uses proprietary Insurify data to break down the average monthly cost of car insurance by gender. 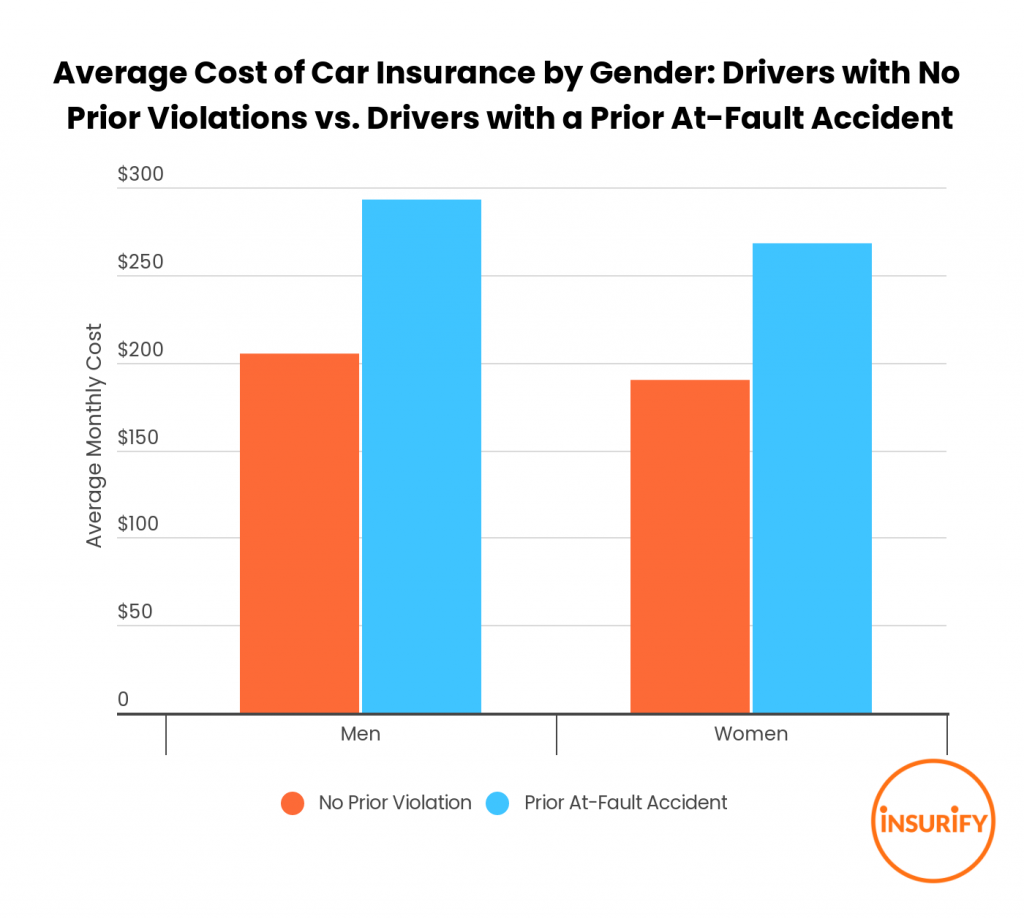 Most Common Causes of Car Accidents

What are the most common reasons that lead to a crash? As you might be able to guess, drunk driving, speeding, and distracted driving all play a major role in causing many car accidents, but you might be surprised by the unexpected impact that driving while drowsy or in poor weather can have.

The graphic below uses proprietary Insurify data to compare the average monthly cost of car insurance for drivers with a clean record as opposed to those with a number of different driving violations. 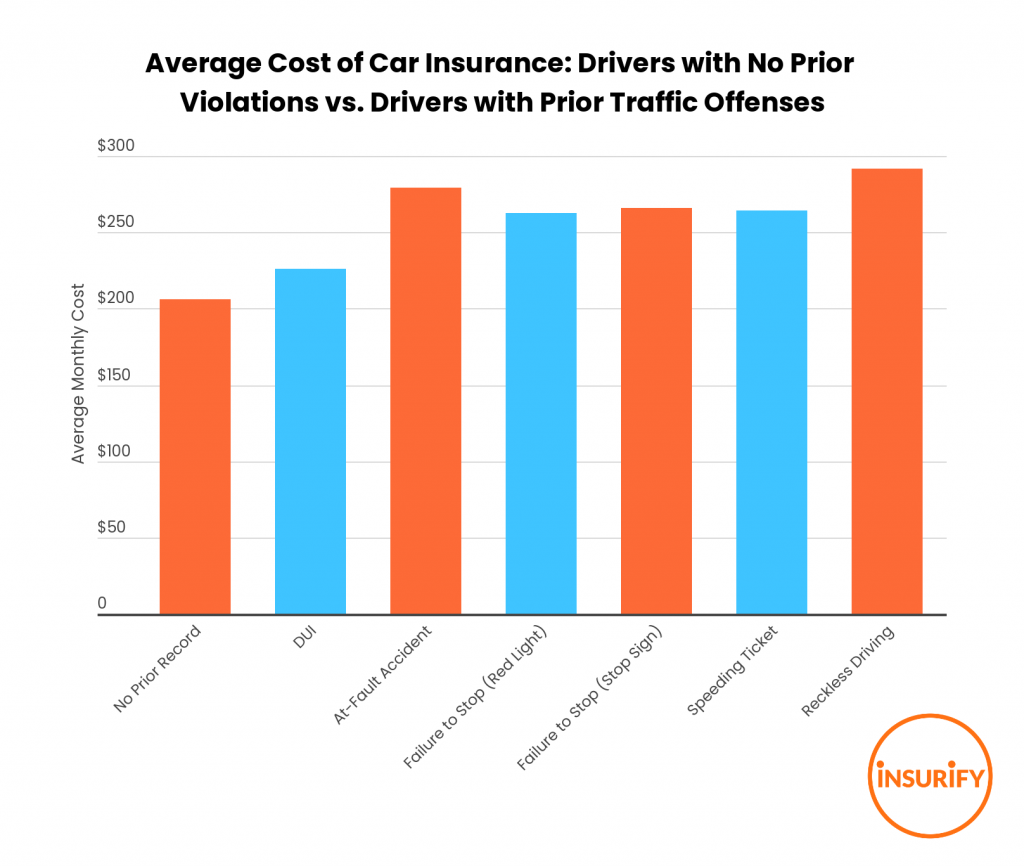 How the Time and Date Affect Car Accidents

Sometimes car accidents end in tragedy. In order to stay safe, it’s important to be informed about the prevalence of fatal car accidents and how such accidents typically occur.

You’ve learned more about how frequent crashes are and what factors tend to cause them. But what about the larger trends regarding car accidents and driver safety? Is the road becoming a safer place, or is getting behind the wheel as hazardous as ever? The graphic below uses proprietary Insurify data to compare the percentage of American drivers with prior at-fault accidents compared to those without. 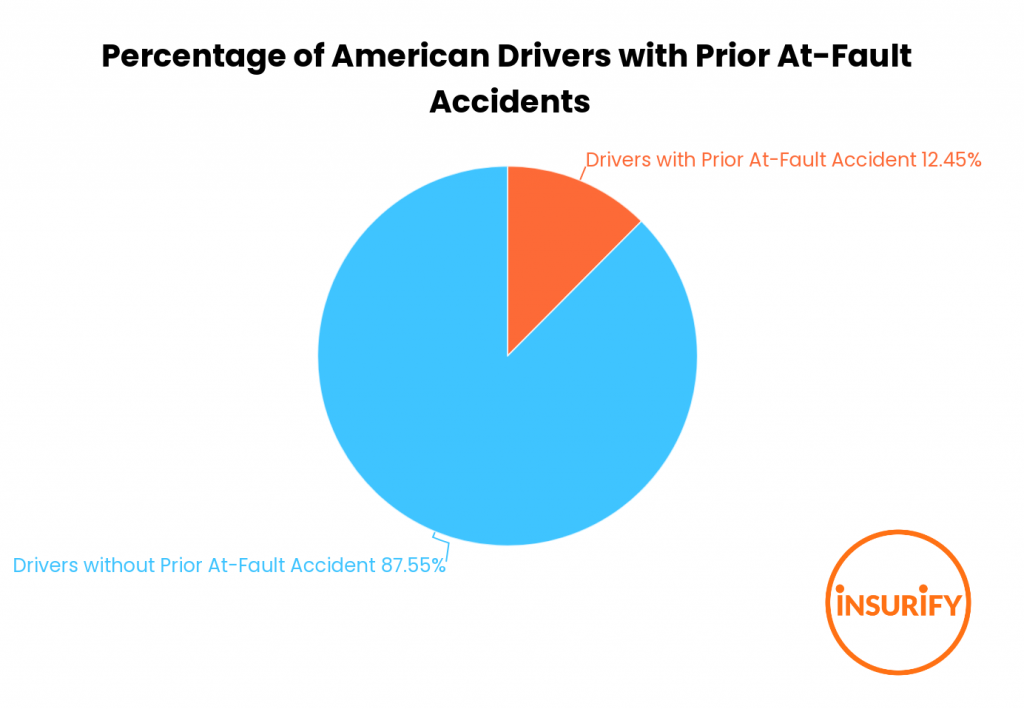 Other Trends in Car Accidents

Has COVID-19 influenced car accidents? As you might expect, COVID-19 has had a profound impact on how much Americans drive and their behavior behind the wheel, according to Insurify’s 2020 Annual Report.

One of the most serious aftereffects of an accident behind the wheel is the serious impact it can have on your car insurance premiums. That’s why one of the most important things you can do after a car accident is taking a few minutes to use a quote-comparison website like Insurify and see whether you might be eligible for a less expensive policy or to purchase a plan with more comprehensive coverage. The statistics below are drawn from the Insurify 2020 Annual Report.

The proprietary Insurify graphic below shows just how much a driving violation can cost, demonstrating the average percentage increase in monthly premiums after minor, intermediate, and major violations behind the wheel. 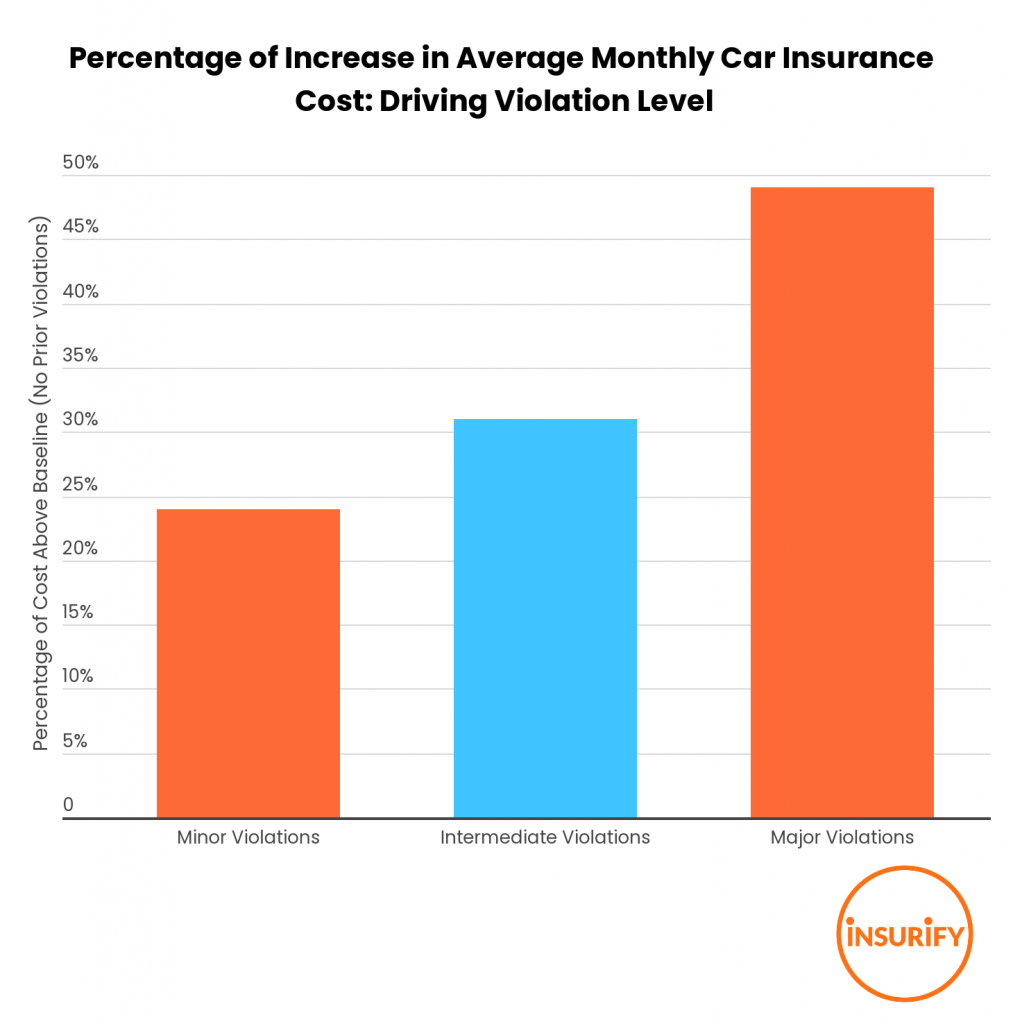 How much can an accident raise my insurance?

Major violations such as at-fault accidents, driving under the influence, having speeding contests on public roads, and reckless driving all have significant impacts on car insurance rates and can raise driver's premiums by as much as 49%.

What are the most common causes of car accidents?

Drunk driving, speeding, distracted driving, aggressive driving, and driving while drowsy are the primary causes of car accidents. Weather, illness, and psychological or emotional stress can also be contributing factors to car accidents.

Compare quotes
Save Money with Insurify - It's Free