Insights>Cities With The Most Duis 2021

Driving under the influence is unfortunately more common during the holiday season. These are cities in each state where DUI offenses occur at exceptionally high rates. 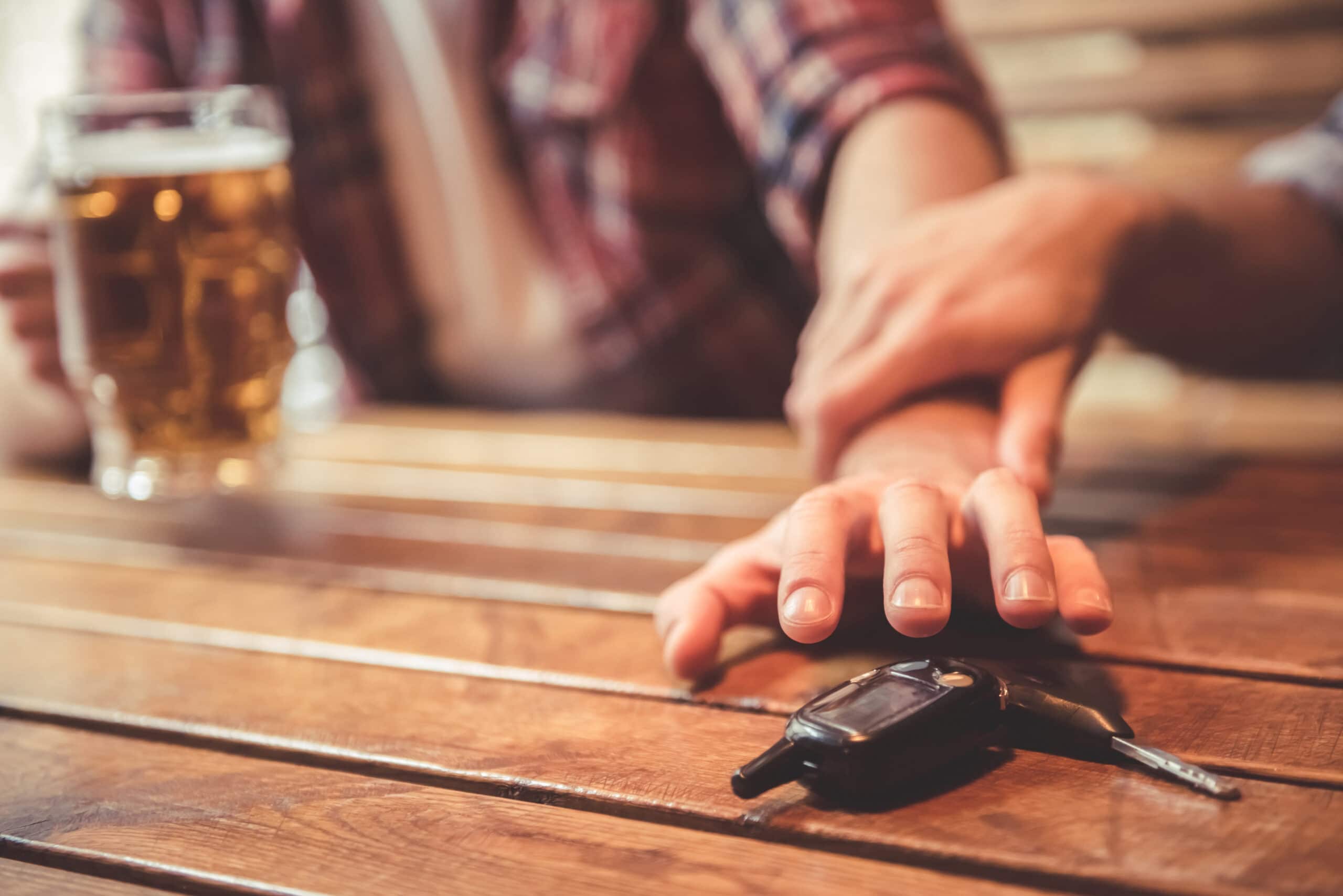 Driving during the month of December is historically more dangerous compared to other months. Increased traffic during the holiday season, paired with inclement and unpredictable weather patterns, spells for trouble on the roads for many drivers. Not only are general road conditions less-than-ideal, but the influx of celebrations with no shortage of libations leads to a spike in DUIs during this time of year.

Getting behind the wheel after having a drink (or a few) is not only unwise but incredibly dangerous and potentially fatal. In fact, 28% of fatal crashes during the month of December involve drunk drivers, according to the National Highway Traffic Safety Administration (NHTSA). To investigate where drunk driving occurs most often in 2021, the research team at Insurify turned to their proprietary database of over 4 million car insurance applications and identified the city in each state with the highest DUI rate. 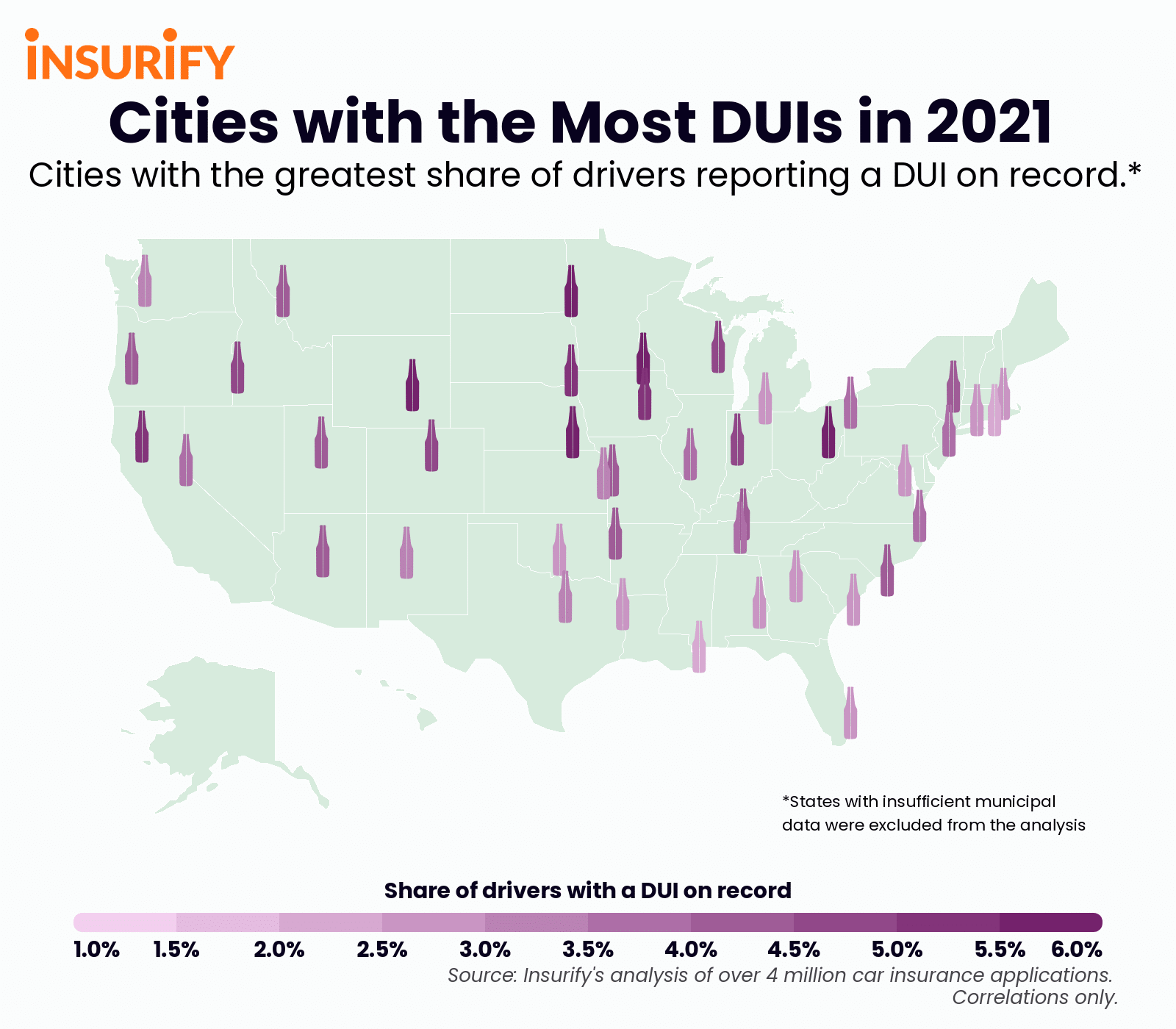 The data scientists at Insurify, a site to compare auto insurance rates, referred to their database of over 4 million car insurance applications to determine the city with the most DUIs for each state. When applying for auto insurance, drivers disclose their city and state of residence, in addition to any prior infractions on their record within the past seven years. Insurify’s research team compared the population of drivers with at least one DUI to the total number of drivers across 566 U.S. cities. The city with the highest share of drivers with a DUI in each state was selected as the city with the most DUIs in its respective state.

Cities in this analysis were designated using the United States Census Bureau’s classification of an “urbanized area,” defined as an urban area with a population over 50,000. States with insufficient municipal data were excluded from the analysis (Alaska, Delaware, Hawaii, New Hampshire, Vermont, and West Virginia).

Who gets the most DUIs?

Drivers in Canton, Ohio get the most DUIs in the nation compared to drivers in all other U.S. cities. As of 2021, 5.5% of drivers in Canton have at least one DUI on their driving record from within the past seven years, a share that’s nearly 3x higher than the national average.

The Cities with the Most DUIs by State

How much is car insurance in California? Answers to all your coverage-related questions and more, from Insurify’s experts.

Find quotes for cheap car insurance in Florida by comparing between multiple providers, all on Insurify’s easy-to-use, one-stop-shop platform.

For Lone Star drivers, getting cheap car insurance Texas is made easier when you let Insurify compare personalized quotes to find the best option for your wallet. Compare and see how much you could be saving today!

Savings as sweet as (peach) pie! Insurify’s got all of the best options for cheap car insurance GA when Peach State drivers compare online.

To find quotes for cheap auto insurance South Carolina, let Insurify take the legwork out of finding the best rate by comparing all your options for you.

Insurify’s helped millions of drivers across the nation compare auto insurance rates to save them time and money when shopping for coverage. All online, in real-time: insurance shopping has never been this easy.