From sleek sports cars to big pickups, drivers of these ten vehicles break speeding laws at the highest rates in the nation. 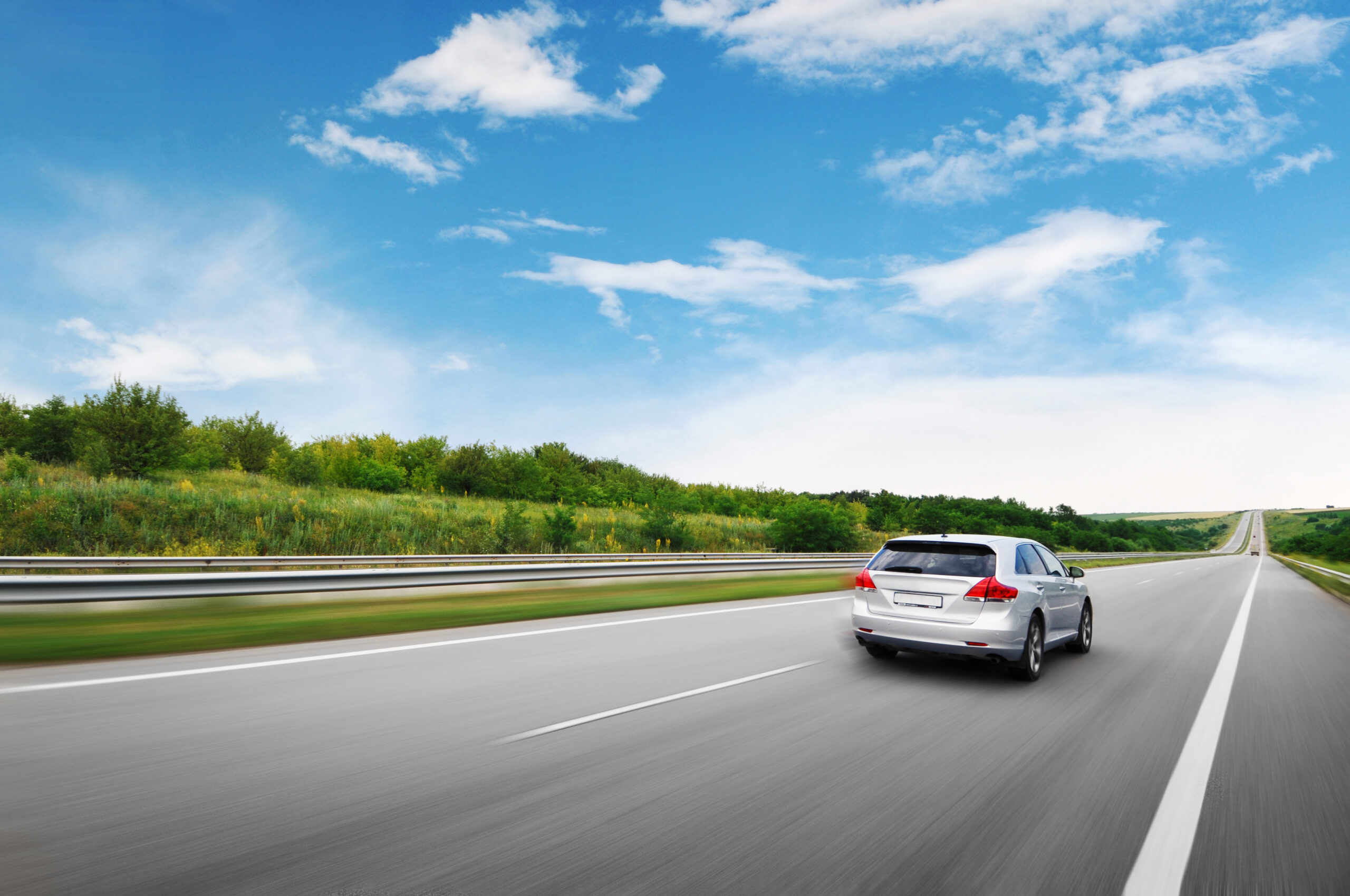 Certain cars come with loaded reputations. Whether it’s a minivan “mom” car or a loud-revving racer, a driver’s choice of vehicle doesn’t just represent what they drive, but also how they drive. And regrettably, some vehicles tend to attract drivers that are less than law-abiding. Breaking traffic laws never ends well, whether it results in legal repercussions, paying fines, or worse, endangering the lives of others on the road. Unfortunately, there are drivers who disregard these rules and consistently engage in bad behavior while driving, such as speeding.

While speeding is one of the most common traffic citations in the U.S., drivers of particular cars are more inclined to speed than others. Curious to see which cars rack up the most speeding tickets in the nation, the research team at Insurify crunched the numbers to identify the car models with the speediest drivers in 2021. 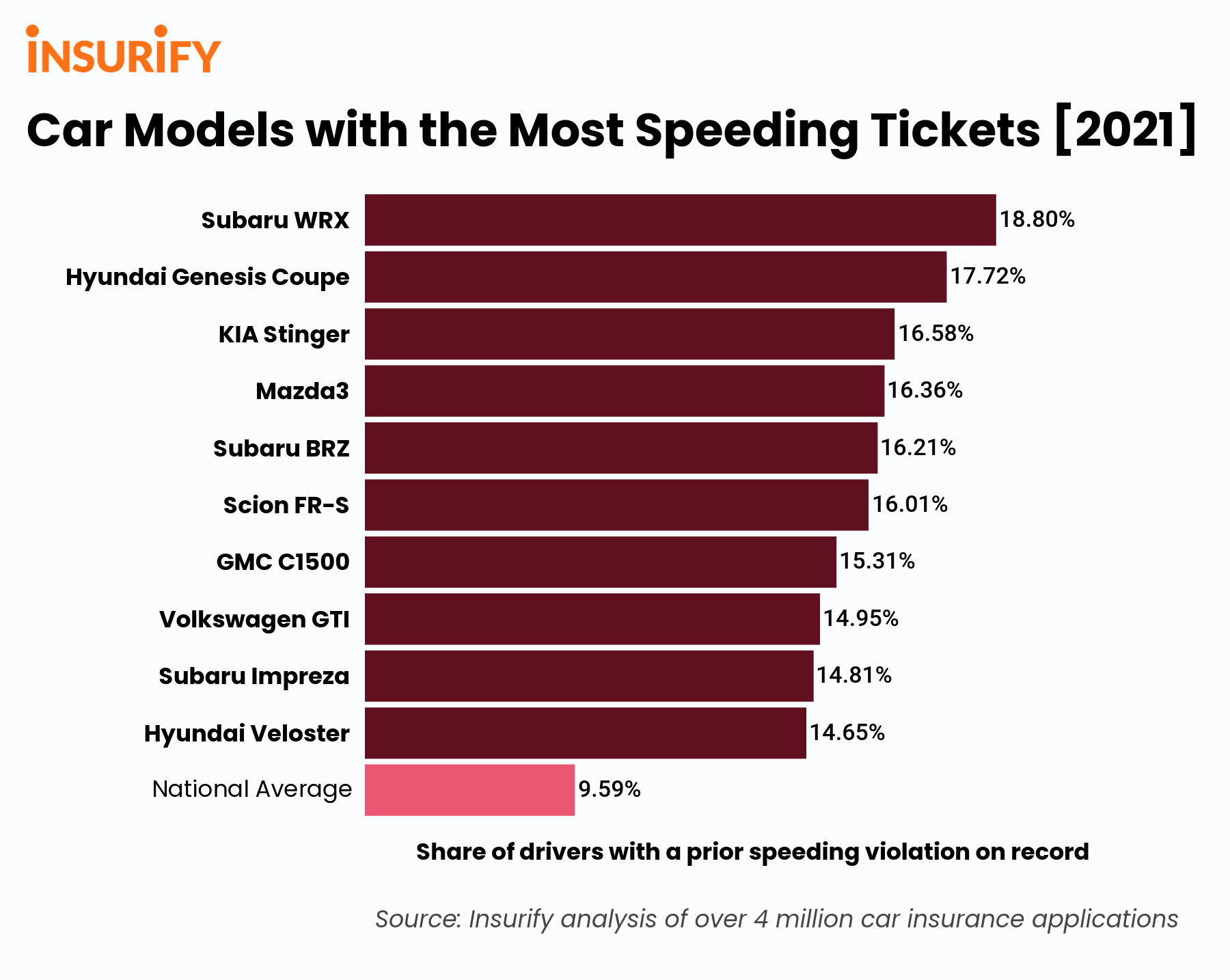 The data scientists at Insurify, an online car insurance comparison platform, referred to their database of over 4 million car insurance applications to identify which car models have the most speeding violations in 2021. When applying for car insurance, users submit personal and vehicle information, including the make and model of the car they drive and any violations, including speeding tickets, on their record.

Insurify’s data scientists analyzed the number of car owners with a prior speeding violation against the total number of drivers across 393 models to determine the proportion of drivers with a speeding violation. The ten models with the highest share of drivers who have been cited for speeding were identified as having the speediest drivers in 2021. Data on MSRP and MPG were compiled from manufacturer websites and reflect the most recent vehicle model year available.

Cars with the Most Speeding Tickets

Car Models with the Most Speeding Tickets in 2021

Drivers of the Hyundai Veloster have the tenth-highest speeding rate in the nation. Veloster drivers are 35% more likely to get cited for speeding than the average driver. The Veloster is one of the five sports cars in the rankings, and its drivers certainly live up to the reputation of fast and furious sports cars enthusiasts.

Want to compare auto insurance rates without compromising any personal information? Insurify’s experts wrote the guide to getting an anonymous car insurance quote with just a few clicks.

Finding car insurance without a license is possible, and made easier by comparing customized rates with Insurify.

The Subaru Impreza may be compact, but its drivers’ speeding habits command a large presence on the roads. Impreza drivers have a speeding ticket rate that’s 36% greater than the national average, landing them at ninth in the rankings of car models with the speediest drivers. Touted by Kelly Blue Book for its “unbeatable combination of safety, reliability, capability, and affordability” and given a 5-star NHTSA Safety Rating, the Impreza has a reputation as a practical vehicle choice. Their drivers, on the other hand, defy this reputation by speeding dangerously and getting ticketed for it at exorbitant rates.

A “sporty” and “distinctive” sports car that is not bad for drivers on a budget, the Volkswagen GTI is a more affordable and practical option for drivers who want to show off without necessarily breaking the bank. Unfortunately, many GTI drivers take its sporty reputation a bit too seriously by violating speeding laws at unprecedented rates. Drivers of the GTI have a speeding rate that exceeds the national average by 36%, the eighth-highest in the nation.

Let Insurify compare your personalized auto insurance quotes to help you save big on your monthly car insurance premium.

Cheap car insurance quotes are instantly at your fingertips when you compare rates online with Insurify.

The GMC C1500, also known as the GMC Sierra, is somewhat of an outlier on this list as the only pickup truck among compact, luxury, and sports cars. GMC C1500 drivers, however, hold their own against the other drivers in the rankings, maintaining a speeding violation rate that’s 38% greater than the national average. Although the GMC C1500 is not built primarily for performance like many of the other vehicles in the rankings, this pickup can evidently reach — and exceed — speed limits just as aggressively as a sports car.

This sporty coupe may be known for its sleek exterior and performance capabilities, but in 2021, the Scion FR-S is also becoming known for its high rate of speeding violations. FR-S drivers exceed speed limits at a rate that eclipses the national average by 41%, landing them at sixth in the rankings of the most speeding-prone drivers. For a sports car, the FR-S is more affordable and fuel-efficient compared to others on the market, but with that fuel economy and accessible price point come drivers that disregard speed limits more often.

You can get great coverage without breaking the bank. Insurify can find you personalized cheap car insurance quotes in just a few clicks.

Use Insurify’s car insurance estimator to get a free quote estimates, tailor-made to your personal profile and history.

One of the three Subarus in the rankings, the BRZ is fifth in the nation in speeding-prone drivers. With a speeding ticket rate that’s 41% greater than the national average, drivers of this sporty vehicle could certainly use a lesson in pumping the brakes. The BRZ is a sports car for drivers who prioritize performance above much else, which their speedy driving behaviors certainly reflect.

Coming in at number four is the Mazda3, whose drivers exceed national speeding violation rates by 42%. This sleek sedan is an optimal choice for “connoisseurs of classic refinement”, according to its manufacturer, but it’s clear that the Mazda3 is also a choice for those who tend to lean too heavily on the gas pedal and get caught breaking speeding laws.

A car that’s “built to thrill” is sure to attract drivers with a penchant for the bold and brash, but unfortunately, drivers of the KIA Stinger also have a lawbreaking need for speed. Stinger drivers are caught violating speed limits 43% more often than the average driver. One of the five performance sports vehicles in the rankings, the Stinger lives up to its reputation as fitting for drivers seeking thrills, especially those who push the limits of the law to do so.

Despite being discontinued in 2016, Hyundai Genesis Coupe drivers have not disappeared without a trace, but rather have earned somewhat of a notorious reputation for rulebreaking on the roads. Much like other lower-cost, high-performance sports cars in the rankings, the Genesis Coupe has the second-highest speeding violation rate in the nation. Drivers of the Genesis Coupe are cited for exceeding speed limits 45% more often than the average driver.

Coming in at number one for the third year in a row, the Subaru WRX has the most speeding violations of any vehicle in the nation. WRX drivers get 49% more speeding tickets than the average American driver, making their violation rate the highest in the country. Despite having the speediest drivers in the nation, the WRX boasts multiple accolades for its safety features, including being named a 2021 Top Safety Pick and receiving the highest possible rating for crash prevention from IIHS. It’s a fortunate coincidence that the vehicle whose drivers tend to break the most speeding laws are driving one of the safer sports cars on the market, given their unprecedented rulebreaking rates.