Which cars tend to have the speediest drivers? 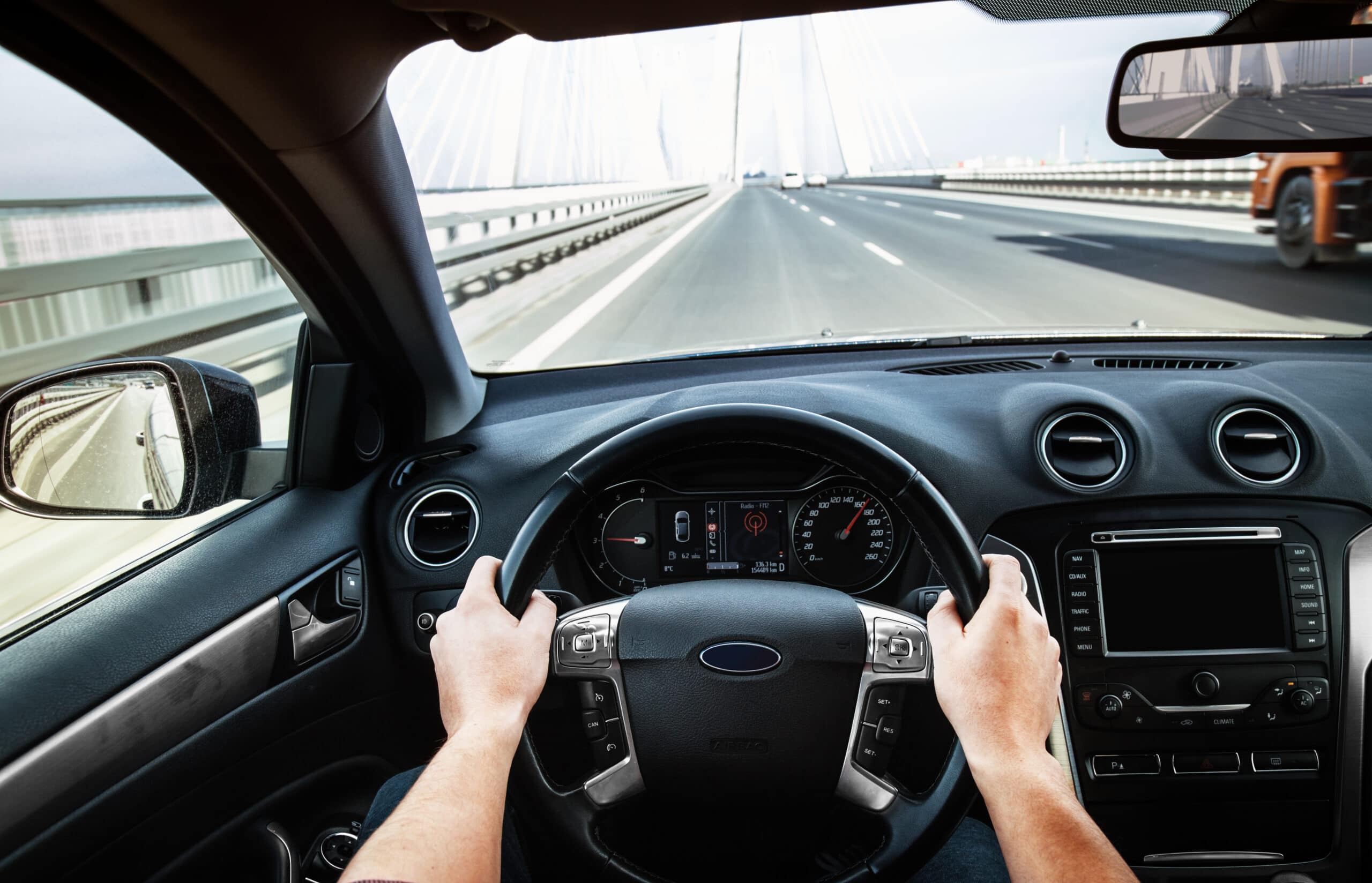 Getting out of the house and onto an open roadway may be one of the most liberating activities we can safely do nowadays. Despite our pent up energy from staying at home in quarantine, drivers should make sure to be aware of speed regulations on the road. According to USNews, while traffic overall in the United States has thinned out over the course of the COVID-19 pandemic, rates of reckless driving and speeding have spiked. These patterns are likely due to the lack of inhibitions drivers tend to feel when confronted with a non-congested road — without other drivers around you to set the pace, it can be easier to overdo it on the gas pedal.

When it comes to speeding violations, some particular models seem to be ticketed for exceeding the speed limit more than others. Maybe these car models are just unlucky enough to attract more attention, or maybe their drivers truly are adrenaline junkies. Either way, the research team at Insurify was curious to understand which car models have accumulated the most speeding violations. 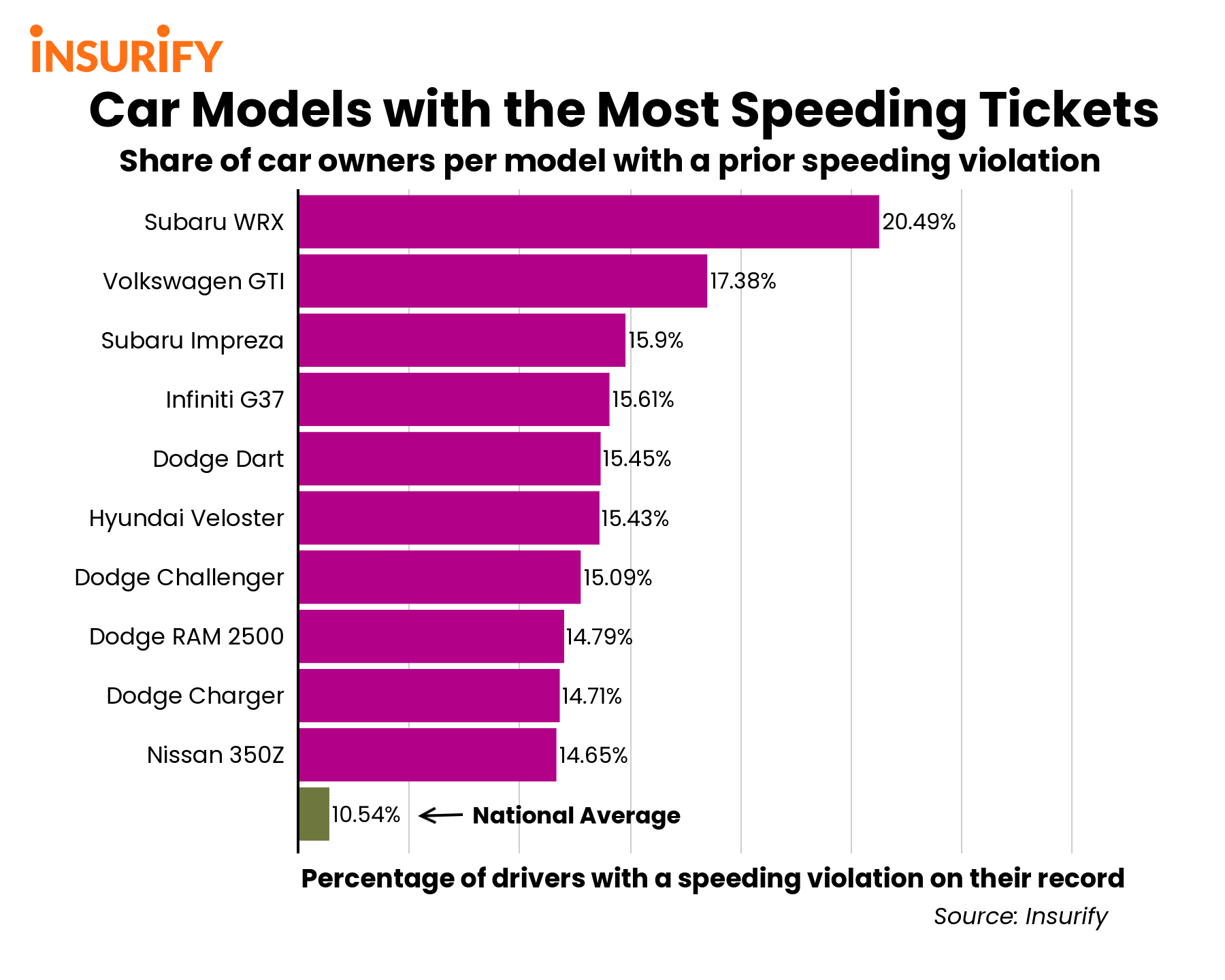 The research team at Insurify, an auto insurance quote comparison platform, examined their database of over 2.5 million car insurance applications to identify the car models with the most speeding violations. To apply for quotes, drivers input personal and vehicle information, including the model of car they drive and whether or not they have been convicted of speeding in the past. The research team analyzed the number of car owners with a prior speeding violation against the total number of drivers for each model to determine the proportion with a speeding violation. From this selection, they narrowed down the subset to the models with the ten highest shares of ticketed drivers. Data on the cars’ MSRP and MPG was compiled by Autoblog for the most recent model available.

Top 10 Car Models with the Most Speeding Tickets

Coasting down the highway with the top down may be any driver’s dream, but owners of the Nissan 350Z had better be careful — drivers of this car experience speeding violations at a rate that’s 29 percent higher than the national average. Despite being the most expensive model on the list, the Nissan 350Z still markets itself as an affordable alternative to more high-end brands. Drivers of the 350Z may try to live up to this reputation by driving free and fast. Unfortunately, this also means that drivers of these models are more likely to get penalized for their speedy on-road behavior.

Sometimes, you don’t want to put all of your info out there. Here’s how to get anonymous car insurance quotes and keep your personal info on the low.

Can you get car insurance without a license? Insurify’s experts wrote the how-to guide for getting your quote.

Drivers of Dodge Chargers certainly aren’t holding back from charging forward with great speed on the road. This model that “defines raw muscle”, according to Dodge, is ninth on the list of car models with the most speeding violations. Drivers of this Dodge model, the first of four on the top ten list, experience speeding violations at a rate that’s 29 percent above the national average. While the Dodge Charger is a relatively inexpensive model, sold at a cost 21 percent below the average vehicle price, it’s clear that its sensible price does not necessarily lead to sensible driving.

The second Dodge model on the list, and a consistent figure in the rankings of car models with the most speed violations, the Dodge RAM 2500 comes in eighth for the fast pace of its drivers. While it has moved from sixth to eighth place for its speeding violations, drivers of the Dodge RAM 2500 are still remarkably speedy with a citation rate 29 percent higher than the nationwide mean. The Dodge RAM 2500 is also notably the only pickup truck in the top ten rankings. Don’t be fooled by its size and relative fuel inefficiency — Dodge RAM 2500 drivers are uninhibited by this pick-up truck’s bearings to reach high speeds on the road.

So many quotes, so little time. Luckily, Insurify’s comparison tool takes the leg work out of it and makes it easy for you to compare car insurance.

You want the best protection when you’re out on the road – find the car insurance quotes that work with your budget on Insurify.

With a “big, brash personality” according to Dodge, the Challenger’s claim to the seventh-highest frequency of speeding infractions may be slightly unsurprising. Challenger drivers are ticketed for speeding at a rate that’s 31 percent higher than the norm. This is especially notable given that its share of speeding offenses didn’t even break the top 10 in the 2019 rankings.. Known for its all-wheel-drive and forceful engine, the Challenger boasts “a legacy of increasing adrenaline to satisfy any thrill seeker”. By targeting its marketing toward a consumer looking for an exciting ride, the Challenger’s messaging may influence how its drivers behave on the road. No wonder why they call it a Hellcat!

Hyundai describes the Veloster as “both fun to look at and fun to drive” with a “sporty and aggressive design.” It may come as no shock then that the Veloster drivers have the sixth-highest rate of speeding violations of any car owners at 32 percent higher than the national average. While this hatchback stands out as a relatively affordable and fuel-efficient model, its high rate of speeding violations suggests that its drivers do not necessarily follow the Veloster’s embodiment of practicality.

Great protection doesn’t have to hurt your wallet. Insurify’s got you covered for cheap car insurance quotes – find yours today.

Savings are just a click away! Use Insurify’s car insurance calculator to save money on your premium.

The Dodge Dart is the fourth Dodge model and the fifth-highest speeding violation rate on the list. As a compact sedan, the Dart has historically made a name for itself as a reliable, sturdy, and safety-conscious vehicle. Even as its marketing skews towards the astute consumer, rather than the speed junkie, Dart drivers still tend to lay heavy on the gas pedal — their speeding violation rate is 32 percent higher than the average driver’s.

The fourth model on the list, the Infiniti G37, moved up from eighth place in last year’s rankings — these drivers’ speeding violation rate increased to 15.61, which is 33 percent higher than the national average. Not only is the G37 a repeat offender, but it also follows the overarching pattern of speed violators being comparatively affordable and practical versions of sports cars. Before it was discontinued, the G37 could come as a sedan, a coupe, or hardtop convertible — the vision of flying down the highway with the top down could very well have been an aspiration of Infiniti G37 owners, hiking up their speeding rates.

Subaru describes the Impreza as a model that’s “as reliable and sensible as cars get.” Despite the Impreza’s physical features and built-in safety measures, such as the 2020 model’s automatic emergency braking with pedestrian detection, its drivers may not be so safety-conscious — their speeding violation rate is 34 percent higher than the national average. Hopefully, as more Impreza owners adapt to the newer models with the increased on-road protective measures, their overall driving behaviors will settle at more reasonable speeds.

With a 40 percent above-average speeding rate, the Volkswagen GTI rose in the ranks from third to second in this year’s list. Prior to its discontinuation, the GTI was marketed as a powerful sports car, albeit slightly bulkier and significantly more affordable than your typical sleek sports model. The only Volkswagen to make the list, the GTI follows the pattern of car models that are somewhat more practical versions of high-end sports cars — considering factors like fuel efficiency, base price, and safety features — experiencing high rates of speeding violations.

The Subaru WRX has maintained its spot at number one in the rankings for the car model with the most speeding violations. Subaru owners are widely considered to be practical and value functionality over flashiness, which makes the WRX’s 49 percent higher-than-average speeding rate somewhat surprising. The Subaru WRX does boast a high volume of safety features, including brake assist and traction control systems. Perhaps the abundance of safety precautions enables WRX drivers to go faster than normal, but in any case, it’s evident that these Subaru drivers are consistently getting caught for violating speed regulations on the road.

Learn More
Insights>Car Models With The Most Speeding Tickets 2020