Insights>Car Models With The Most Duis

It’s well-established that driving while drunk or under the influence of drugs is a dangerous practice, but people do it nonetheless. These are the car models that are most often cited for DUI. 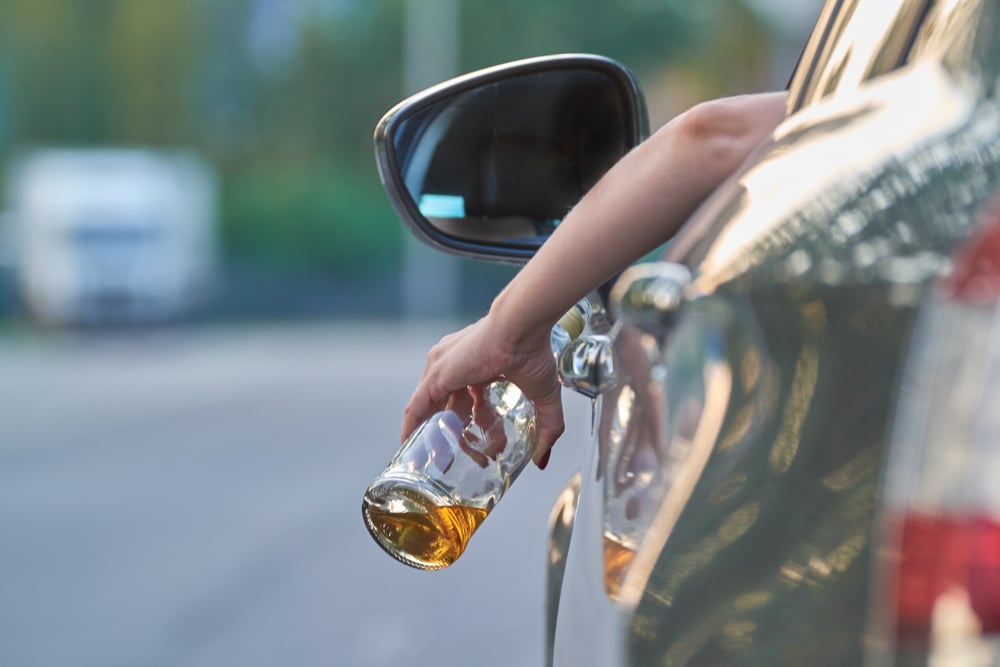 In 1982, the number of deaths related to driving under the influence reached a record-high of 5,215. Since then, thanks to stricter laws, more comprehensive education regarding alcohol safety, and the development of technology such as ignition interlock device, DUI-related fatalities have decreased by almost 80 percent. In 2017, 1,064 people were killed as a result of drunk driving.

Nevertheless, DUIs remain a problem nationwide, and advocates continue to push for new policies aimed at further lowering the number of fatalities. The National Transportation Safety Board recommended lowering the legal blood-alcohol content driving limit from 0.08 to 0.05 in 2013.

To take a closer look at DUIs in the United States, the data science team at Insurify decided to discover which car models are most often flagged for driving under the influence. 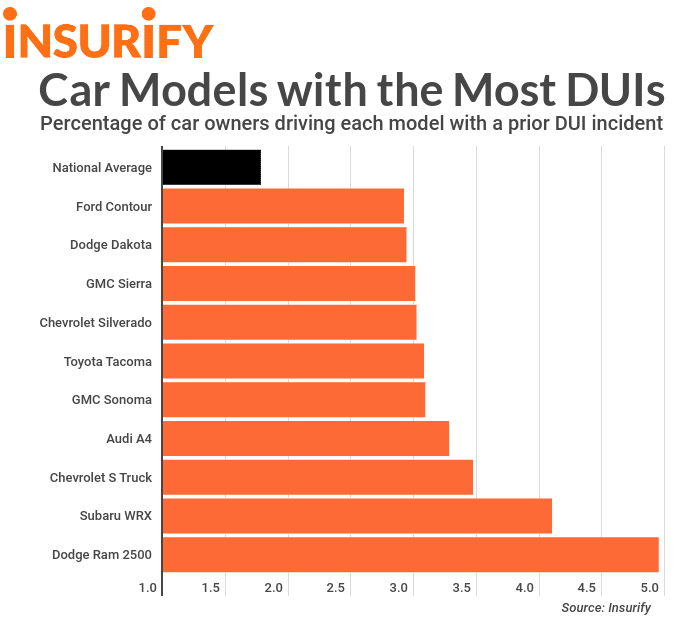 To discover which cars have the highest percentage of models with a prior DUI, researchers at Insurify, a website for auto insurance comparison, pulled the numbers from their database of over 1.6 million car insurance applications. To apply for quotes, users input personal and vehicle information from the past seven years, including the model of car they drive, and whether they have been cited for driving under the influence. For each model, the share of drivers with a prior DUI violation was compared against the total population of motorists that owned that model. The 10 models with the highest proportion of drivers with a DUI were then selected. Data on the base manufacturer suggested retail price and MPG of the models were pulled from USNews and Autoblog.

Car Models with the Most DUIs

The Contour was in production for just two years, 1999 and 2000. Nevertheless, it still kicks off the countdown, with just under three percent of models with at least one prior DUI violation. The car was initially designed as a crossover between a classic four-door sedan and a sports car, but is nonetheless affordable. Its base model MSRP is the lowest of any vehicle in the top 10, though that likely has to do with its age as much as its design.

Looking for a good place to do car insurance comparison? Check out these top platforms.

Find the providers that offer the best Uber insurance.

The Dakota was once a staple of Dodge’s lineup of mid-size pickup trucks, and was originally introduced in 1986 along with the Ram 50. From then until its discontinuation in 2011, it was popular among drivers but also law enforcement. The police and fire departments found a variety of uses for the Dakota as an off-road vehicle or brush truck.

The Sierra definitely doesn’t come cheap, with a base MSRP more expensive than all but one other car on the list. One of GMC’s trademark trucks certainly makes up for it, however, with a tailgate designed for a variety of uses, as well as a comprehensive infotainment system that offers technology for improving trailering. Importantly, it’s a relatively fuel-efficient truck, with a highway MPG better than every other truck in the top 10.

There are more low cost auto insurance options than you may realize. These are some of the best options.

Confused about the SR-22? Take a look at this guide to SR-22 insurance cost.

The Silverado is mechanically similar to the GMC Sierra, though it does retail for slightly cheaper than its counterpart. First introduced in 1998, the Silverado has become a perennial best-selling vehicle in the United States. More than 12 million Silverados have been sold since its introduction, with 585,581 leaving stores in 2018 alone. Nevertheless, the popular model appears to have an issue with DUIs, as Silverados and their drivers have a prior DUI rate that’s nearly double the national average.

The fourth of seven trucks in the top 10, the Tacoma is another model with a long history in the United States. The model was first introduced by Toyota in 1995 and has been in production ever since. The Tacoma is more fuel-efficient than the average truck, with city and highway MPG figures equivalent to that of the GMC Sierra, and also relatively cheap. It has a base MSRP more expensive than only four other models on the list.

Homeowners insurance with bad credit are available and you should consider all quote options.

The Sonoma is one of three cars on this list that is no longer in production. The last Sonoma came off the assembly line in 2004. Described by GMC as a truck with a wide variety of capabilities from commercial truck to even comfortable sedan, the Sonoma nonetheless isn’t the vehicle for those seeking fuel efficiency. Its highway MPG is joint-lowest of any car on the list, though it is cheaper than all but three other cars in the top 10.

The Audi A4, one of just three foreign models in the top 10, was designed as a sport sedan, and thus is the most expensive model on this list. The midsize car is advertised on Audi’s website as having “the performance to match its sporty appearance” and certainly backs that up in the fuel efficiency department. It is also the only vehicle on this list with an average MPG greater than the national average.

You can also use the Zebra insurance to compare quotes.

The Chevrolet S Truck is mechanically identical to the GMC Sonoma, with the same fuel efficiency to boot. Originally released in 1981, the truck was produced for 23 years in North America, before primary production moved to Brazil. The truck was rebranded in 2012 to the Chevrolet Colorado, though it still carries the “S” name as well. Despite being out of production, the S Truck still has the third-highest rate of DUI violations of any car in the United States, with a rate just under double the national average.

Driving under the influence is not the only problem WRX drivers have. The WRX also has the fifth-highest rate of prior accidents of any car model, and the highest rate of speeding tickets. Ironically, the 2019 version of the WRX was actually given the highest possible safety rating from the Insurance Institute of Highway Safety. It’s difficult to say exactly why WRX drivers are so prone to driving violations, though Subaru advertising it with the tagline “Unleashed Speed” might give drivers the wrong idea.

The Dodge Ram 2500—which is also known as the Dodge Ram HD—has the highest rate of DUI violations, with a rate nearly 180 percent higher than the national average. The truck isn’t known for speed or maneuverability, and is advertised as a heavy-duty truck (hence the abbreviation “HD”) more suitable for towing heavy loads than blazing down the streets, though it is getting a redesign in 2019. That’s likely why its MPG is lower than every other car in the top 10.

Learn More
Insights>Car Models With The Most Duis