Drunk driving causes thousands of fatalities each year in the United States. According to the data, certain drivers are worse about drinking and driving than others. 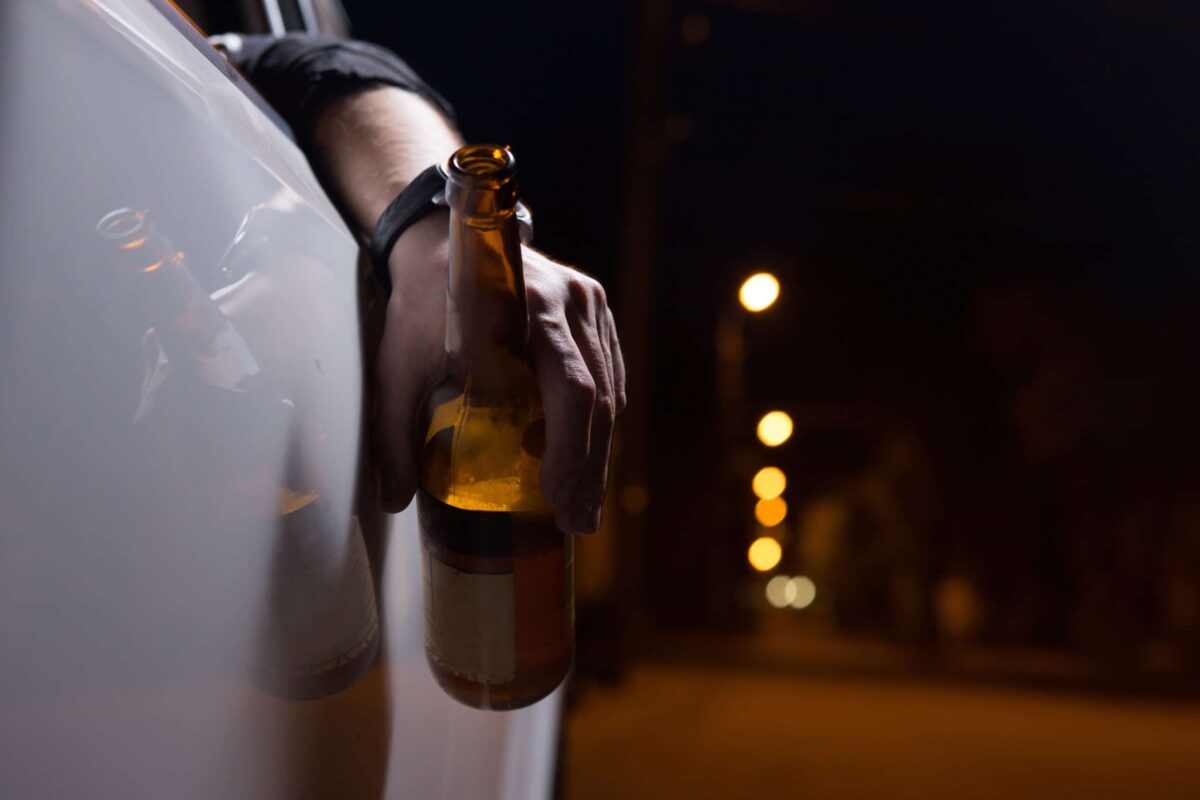 Drunk driving claims the lives of more than 10,000 individuals every year in the United States, according to the NHTSA (National Highway Traffic Safety Administration). If drunk driving fatalities were spread evenly across the year, more than one would occur every hour. Operating a vehicle while intoxicated is deadly, and doing so endangers the driver and any passengers or other drivers in the vicinity. Driving with a BAC (Blood Alcohol Concentration) of 0.08 or higher is illegal in all 50 states. Yet, driving with a BAC between 0.01 and the legal limit can still result in tragedy: nearly one in five people killed in alcohol-related accidents involved a driver with a BAC under the legal limit, according to the NHTSA.

The DUI rate across the country has trended downwards each year, thanks to anti-drunk driving organizations’ efforts to spread awareness of the dangers of driving under the influence, plus the implementation of more stringent legislation across all 50 states. Yet, this doesn’t mean that drunk driving is no longer an issue across the country. In fact, nearly thirty percent of all motor vehicle deaths within the past two years have resulted from alcohol impairment.

Even though drunk driving rates have decreased among all drivers in the United States, some car models attract significantly more DUI-prone drivers than others. To identify the car models with the highest rate of DUIs, the data science team at Insurify referred to their database. 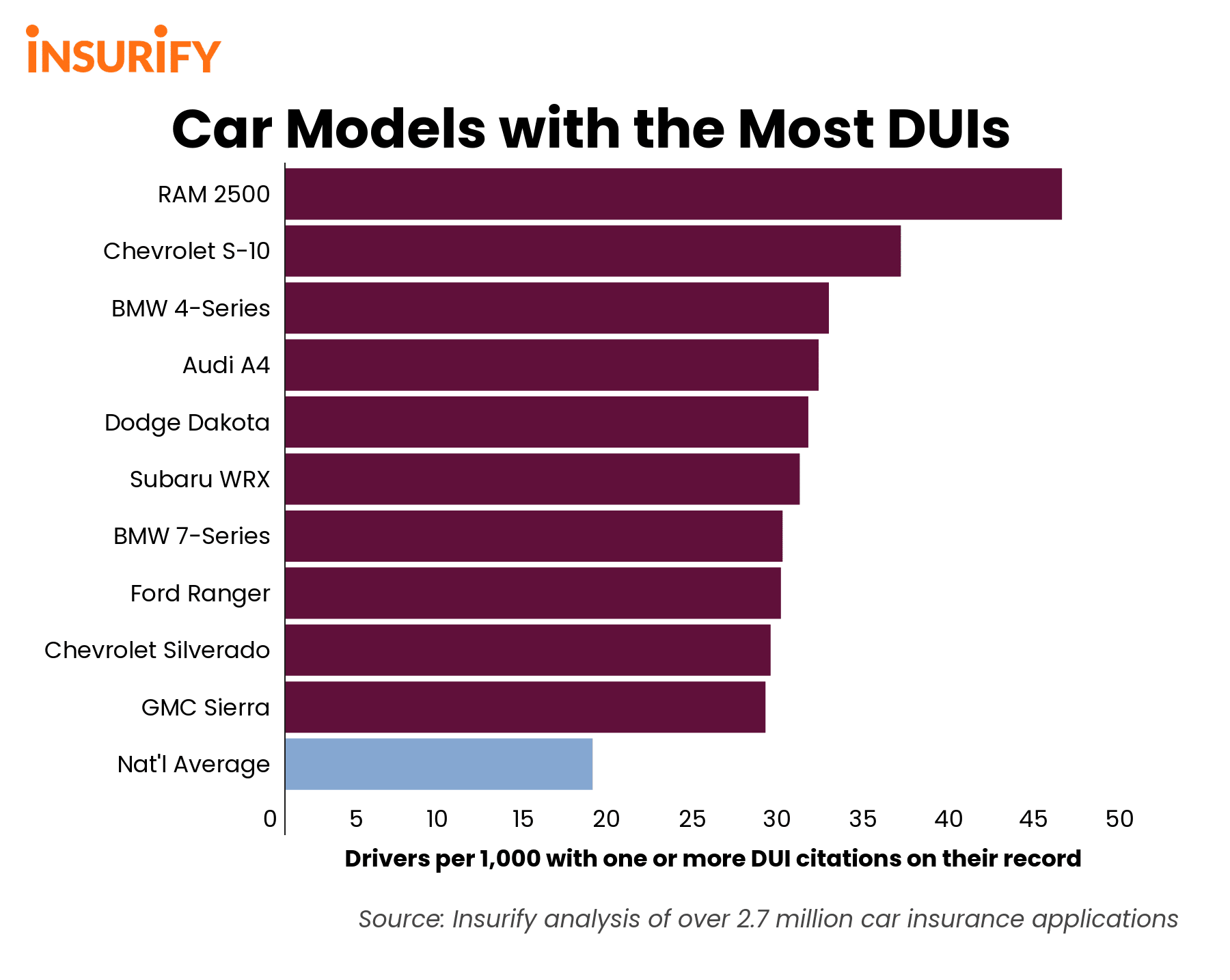 To determine the car models with the highest share of drivers with a prior DUI, the data science team at Insurify, a car insurance comparison platform, referred to their database of over 2.7 million insurance applications. When applying for car insurance, drivers disclose information such as the car they drive in addition to their recent driving history, including moving violations such as DUI citations. Insurify’s data science team calculated the proportion of drivers with one or more prior DUI citations on their record for each car model. From this analysis, they identified the 10 car models with the highest share of DUI citations.

Most common model of car in DUI accidents

The 10 Car Models with the Most DUIs

Rounding out the list of the top ten cars with the most DUIs is the GMC Sierra. Twenty-eight out of every 1,000 GMC Sierra drivers have reported at least one DUI on their record, meaning that drivers of this popular pickup are 56 percent more likely than the average driver to have at least one DUI citation on their record. The GMC Sierra is the more luxurious cousin to the Chevrolet Silverado, which ranks ninth on the list.

It’s possible to get accurate car insurance quotes without giving personal information. See how much (and how little) to reveal when shopping for car insurance.

Ensure that you are getting the best options when looking for DUI insurance in California.

Can you get car insurance without a license? It’s possible to find, according to our experts. There are many situations in which an unlicensed driver may need to insure their car.

Ranking ninth on the list of car models with the most DUIs, the Chevrolet Silverado doesn’t have a great track record for drunk driving. Chevy Silverado drivers have 58 percent more DUI citations than the national average, landing this pickup truck just ahead of its mechanically identical counterpart, the GMC Sierra. Apparently, similarities between these two trucks run deeper than the traits of the trucks themselves; their drivers are very similar as well, with nearly identical rates of DUI violations.

The Ford Ranger has taken an eight-year hiatus from the production line and was re-introduced recently in 2019 with a facelift and improvements to its performance. However, some of its drivers have not taken any kind of break from the dangerous habit of drinking and driving. Out of every 1,000 Ford Ranger drivers, 28.9 have reported at least one DUI citation on their record. As a result, the DUI rate for drivers of this midsize pickup truck is over 60 percent higher than the national average.

Auto insurance comparison doesn’t have to be stressful. See how to compare quotes in just a few clicks.

You’re probably overpaying for car insurance. See how to save on car insurance quotes without compromising your coverage.

One of the only four sedans among the cars with the most DUIs, the BMW 7-Series has 62 percent more drunk drivers than the national average. Perhaps it’s this car’s inherent sportiness that attracts some of the most ill-behaved and dangerous drivers in the nation, because the BMW 7-Series also has the second-rudest drivers, based on a prior Insurify report. Note that DUIs were not considered among driving behaviors categorized as ‘rude’ in the analysis, so these results are independent of the prior study.

The Subaru WRX has 30 in every 1,000 drivers reporting one or more DUIs on their record, the nation’s sixth-highest DUI rate. In general, the Subaru WRX attracts some pretty ill-behaved drivers. Not only are WRX drivers prone to dangerously mixing drinking and driving, but they’re also the worst speeders in the nation, the fourth-rudest, and the third-most likely to cause an accident (likely due to their risky behavior on the roads), according to prior studies by Insurify. Needless to say, it’s probably safest to give the Subaru WRX a wide berth on the roads.

Check out the cheapest insurance companies based on over a dozen factors that could influence the price of your policy.

Coming in fifth is the Dodge Dakota, with nearly 31 in every 1,000 drivers reporting at least one DUI citation. The Dodge Dakota’s last model year was 2011 (although there are rumors of an imminent RAM Dakota 2021 model release), but this pickup has been in circulation ever since. Drivers of the Dodge Dakota don’t have a stellar track record of avoiding driving under the influence: the DUI rate of this pickup truck is 70 percent higher than the national average.

The Audi A4 is the third of only four sedans to make the car models with the most DUIs and has a DUI rate that’s 74 percent higher than the national average. High DUI rates aren’t the only thing that sets A4 drivers apart from the rest. The A4 also has the tenth-highest proportion of rude drivers compared to any other car. Perhaps the same type of driver who’s more likely than the average driver to engage in rude and risky behavior on the roads is also more likely to mix drinking and driving.

The BMW 4-Series has the third-highest DUI rate in the nation and is also the second-most expensive vehicle on the list, behind the BMW 7-Series. Drivers of this sporty luxury car tend to be ill-behaved on the roads in more ways than one. In addition to a dangerous drinking-while-driving habit, BMW 4-Series drivers are also incredibly rude, landing the vehicle first in the nation for rude and illegal driving behavior.

This pickup truck may have been off the new car market since 2004, but many are still on the roads — in fact, the average age of a car in the United States is quite high, at 11.8 years. Despite being out of production for over a decade, the Chevrolet S truck still has the second-highest rate of DUI violations compared to all other cars in the United States. Indeed, twice as many S Truck drivers have one or more DUI violations as the national average.

The RAM 2500 has the highest DUI rate compared to any other car in the United States. In fact, 1 in every 22 RAM 2500 drivers has at least one DUI on their record, compared to the national average of 1 in every 56. It’s the sixth pickup truck to make the top 10 cars with the highest DUI rates in the nation. Built to tow over 10,000 pounds, this heavy-duty pickup truck also, unfortunately, carries around a much higher-than-average share of drunk drivers.