State Automobile Mutual Insurance Company started in 1921 when Robert Pein was sick of overpaying for underwhelming insurance coverage. After 100 years in business, State Auto operates as an insurance pool, providing a range of insurance products to individuals, businesses, ranch owners, and farm owners.

Then, use Insurify’s comparison tools to be confident that you’re getting the best home insurance policy and price. Whether you’re looking for home insurance, life insurance, or car insurance, you can compare insurance quotes and companies with Insurify to find your perfect policy in just a few minutes.

With a standard policy, homeowners have the option to add any number of additional coverage options, such as identity theft coverage and replacement cost coverage, each at an additional charge. But with a protection plus policy, you can also add State Auto ’s HomeXtended endorsement, which includes coverage for lost or damaged cell phones, digital personal records personal records, increased identity theft protection, personal property business use, and more—all with no deductible. The HomeXtended endorsement is included in premier policies.

Other optional coverages for your State Auto home insurance policy include:

State Auto offers a variety of discounts for its auto and home insurance policyholders. The discounts don’t have a set rate and instead are dependent on certain factors, like the age of your home or the type of policy you have.

Bundling your home, umbrella, dwelling fire, or auto insurance policies with State Auto can help lower your premiums by up to 14 percent.

Installing a State Auto –approved home security system, smoke detectors, or fire alarm system can help you save, too.

Homes built to withstand severe weather events like hurricanes and tornadoes are eligible for lower premiums. Only one- and two-family homes are eligible.

Homeowner and dwelling fire policyholders may qualify for a discount, depending on the year their home was built.

Roof construction discounts are granted based on the type of material and age of your home’s roof.

If you were a longstanding policyholder with your last insurer, that could help you save on your State Auto home insurance premiums.

Getting a State Auto home insurance quote more than eight days before you need the policy to go into effect can earn you a discount.

Still, State Auto ’s 100 years in the industry have proven its ability to financially recover after periods of stress. While recovering from RED’s closure, State Auto reported a negative $18.5 million net income in 2017. But by 2018, three years after the subsidiary went into runoff, State Auto was back to reporting positive net incomes.

When it comes to customer reviews, State Auto has earned itself a good NAIC complaint index (any value less than one indicates fewer complaints than average), but current, past, and prospective customers have left complaints on review platforms like Yelp, Google, the Better Business Bureau, and the NAIC. The most frequent complaints were regarding customer service and issues in the claims process.

Since State Auto issues policies through independent insurance agents, claims and customer service issues are typically handled between policyholders and their local agents. This can leave some customers completely satisfied while others are left in the cold with their claims and complaints.

Other reviewers noted experiences when State Auto unexpectedly raised their monthly premiums by hundreds of dollars. One customer said State Auto charged them $165 for insurance coverage the first month and raised their premium to $515 the next month.

Jesse, another unhappy policyholder, noticed their premiums increased slightly each year, but 2020 brought the most significant price change yet.

Multiple unsatisfied customers even referred to State Auto as “unethical” after the company failed to reimburse what they felt should have been covered losses.

Possibly the most surprising reviews came from people who had canceled their State Auto policies or who never had a policy with the company at all. Past policyholders noted ongoing communication and billing issues with State Auto after cancellation. And others reported State Auto issued insurance policies without their knowledge after asking for a quote from the company. 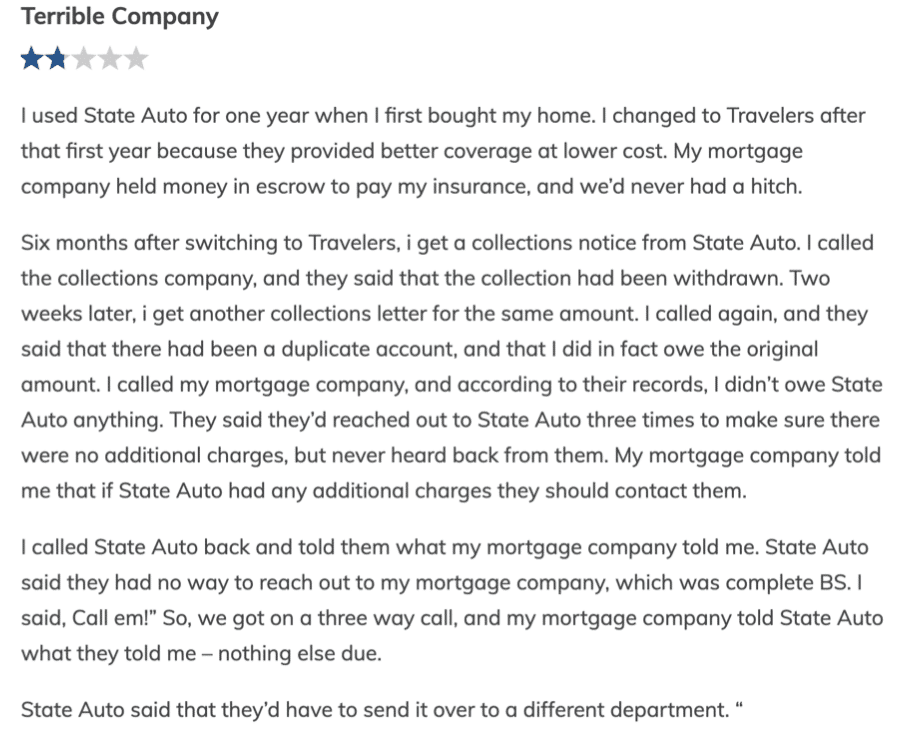 While most State Auto complaints seem to come from car insurance customers, the overwhelming volume of policyholders who reported negative experiences with the company in the last three years depicts State Auto as unreliable at best and unethical at worst. If you’re considering purchasing a State Auto home insurance policy, be sure to talk to your local agent and read through your potential policy’s fine print before you sign.

The Best Way to Save on Home Insurance

We know you’re busy. With Insurify, cheap home insurance is only a few clicks (and minutes) away.

State Auto offers just about any insurance policy an individual, business, or ranch owner could need. But the company seems to leave its customers wanting more when it comes to premium prices, customer care, and filing claims. Before you buy a State Auto policy, compare your rates with more reliable insurers using Insurify’s comparison tools to make sure you’re getting affordable coverage with a great home insurance company.

Jacklyn Walters is a personal finance writer. She has a bachelor's degree from SUNY-Buffalo and specializes in home insurance, striving to help customers make informed decisions about their insurance policies.