Following the rule book to the letter while driving is a difficult endeavor due to the sheer number of possible violations. 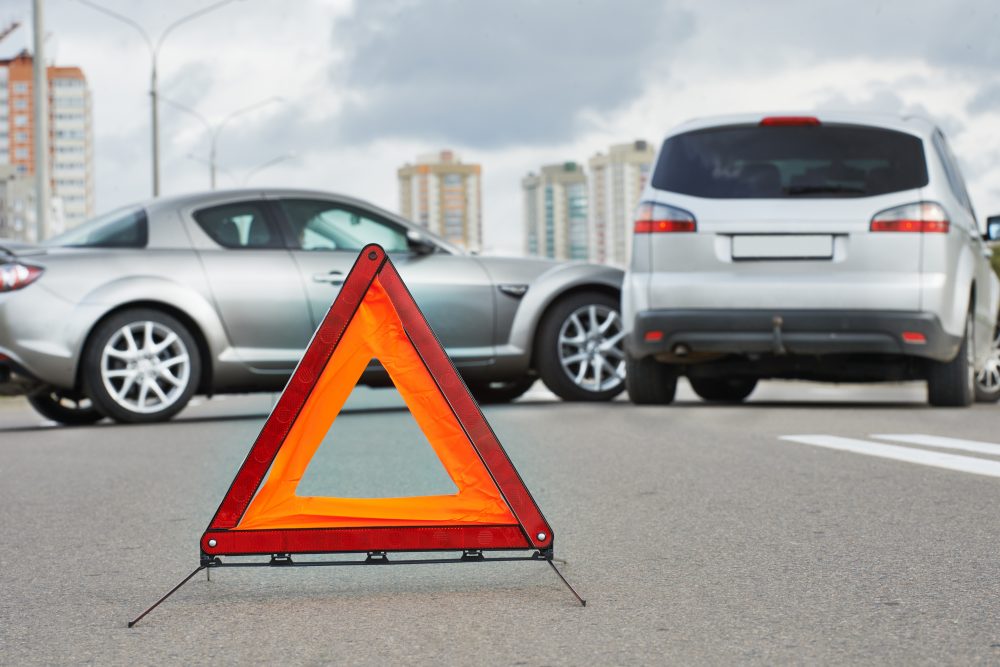 For any driver more than a couple of days removed from their driving test, remembering all the rules of the road and safe driving practices that were taught by their driving instructors is near impossible. The procedures for parallel parking and switching lanes on the freeway become more of a habit than a list of steps to follow, and many drivers don’t continue to come to a full halt at a stop sign. Those lapses of concentration are costly, leading to tickets, fines, a mark on your driving record, and raised insurance rates

According to data gathered by Insurify, an online insurance quotes comparison platform, over 30 percent of drivers have at least one prior driving citation. That number only tells part of the story regarding violations, though. Some offenses are certainly more common than others. With that in mind, the research team at Insurify took a look at the frequency at which specific violations occur. Here are the illegal driving practices you are most likely to see when out on the roads in your state. 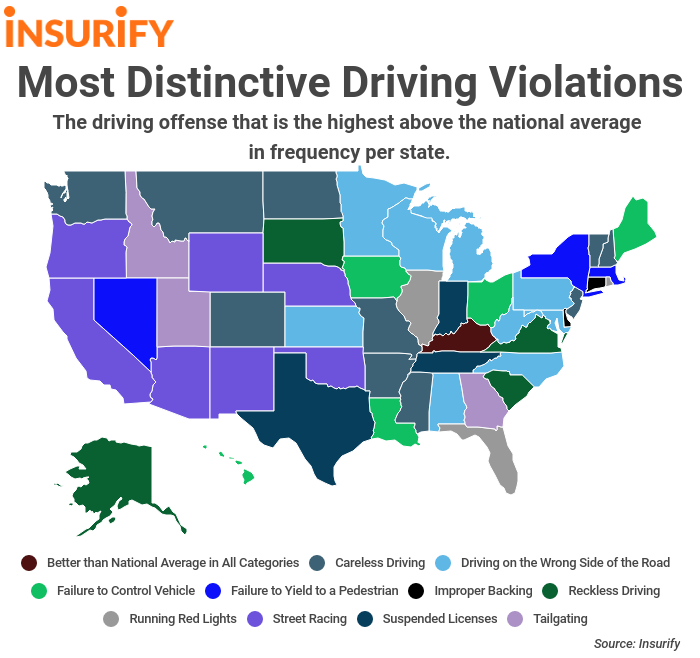 To determine which driving violations were most distinctive, Insurify, an auto insurance comparison platform, analyzed the numbers from its database of over 1.6 million car insurance applications. To apply for quotes, drivers report their vehicle information and driving history, including which motor vehicle violations they have previously been flagged for. Analysts used this information to calculate national and state averages for the share of motorists who have been cited for each offense. Following this, the percentage difference between the state average and the national average for each offense was found, and the violation with the largest positive percentage difference between state and national average in each state was named the most distinctive.

Drivers can be cited for improper backing up if they don’t yield the right of way to oncoming traffic or pedestrians when reversing their car. Backing up on a highway shoulder can also earn you an improper backing violation that goes on your driving record. This is an uncommon scenario—it happens with the third-lowest frequency of any offense on this list.

If you need a reliable source for insurance comparison sites, take a look at these top sites.

Find the providers that offer the best rideshare insurance policies.

9. Failure to Stop at Red Light

This violation is pretty self-explanatory: drive through a red light, get ticketed. It’s certainly a dangerous practice: according to a study done by Verra Mobility, two people died each day in 2015 due to crashes that occurred because of someone running a red light. Despite this, it is still a very common offense. Of the 10 violations on this list, it is the second-most common nationwide.

8. Failure to Yield to a Pedestrian

Failure to yield to a pedestrian is also commonly referred to as a right of way violation. It most often occurs when drivers approach a crosswalk and drive through, despite a pedestrian about to cross or already in the process of crossing. As one might expect, states with large urban areas have the highest percentage of drivers that fail to yield to pedestrians, and that expectation is borne out here. After all, Boston, New York, and Las Vegas, three of America’s most populous and famous urban areas, are in the states listed above.

The Zebra can also be used to shop for insurance quotes.

Having some difficulties with your credit card and still need insurance? These are some of the best providers of auto insurance for drivers with bad credit.

Thirty-three percent of all car collisions are rear-end impacts, according to 2017 data gathered by the National Highway Traffic Safety Administration, and a large portion of those crashes are likely due to drivers following too closely. The problem is a serious one, as tailgating is the fourth-most common offense among the 10 listed here, likely to the dismay of driving school instructors who attempted to drill the proper following distance into their pupils’ heads to no avail.

A driver can have his or her license suspended for a multitude of reasons, including failing to pay parking tickets, or simply racking up too many driving citations. It’s a common issue—the most common on this list—but several states, including all three listed above, have recently introduced legislation designed to reduce the number of suspended licenses by waiving unpaid court fees or tickets.

Are you considering switching car insurance providers? Use our guide to make the best choice.

Check out some different places to get auto insurance with no deposit.

Another very dangerous offense, reckless driving citations are handed out for motorists that drive in a way that shows irreverence or disregard for the safety of other people on the road. This includes swerving dangerously on the highway, flying around a blind curve, or street racing. The consequences of reckless driving also don’t just go on your driving history. Reckless driving in some states, including Alaska, South Carolina, South Dakota, and Virginia, is considered a misdemeanor criminal offense, and offenders can be sent to jail if convicted.

Drivers can be ticketed for failing to control their vehicles under a number of circumstances. Lose control due to an unexpected puddle or patch of ice and go swerving off into traffic? That can be a failure to control citation. If you try and avoid an animal or other obstacle, and are unable to bring your vehicle back under your control, that can also earn you a violation. It doesn’t happen often—just one in 10,000 drivers have a prior failure to control offense—but is still dangerous nonetheless.

Street racing is just what it sounds like—two or more cars attempt to conduct a high-speed race on public roads, without regard for safety or pedestrians. It’s a practice that has killed at least 179 people in just Los Angeles since 2001 and continues to be an issue for law enforcement everywhere. Oftentimes, street racing can result in a reckless driving citation as well.

2. Driving on the Wrong Side of the Road

Driving on the right side of the road should be second nature to most people and it is—this offense actually occurs the least of any on the list—and yet it’s still apparently a difficult task in some places. For a whopping 10 states, driving on the wrong side of the road is their most distinctive driving offense. Notably, many of these states are more rural than urban—which means longer stretches of road with no oncoming traffic in the opposite lane.

Careless driving is not the same thing as reckless driving, despite the similarity of the two offenses. It refers to drivers who fail to drive with the proper caution and carefulness, which can be accidental. Reckless driving, the number five violation on the list, requires the driver’s intention to earn a citation. Nevertheless, any number of things can earn you a careless driving citation, such as illegally changing lanes, falling asleep at the wheel, using your cell phone while on the road, and accidentally disobeying a traffic law. It’s no wonder, then, that drivers all across the country often get cited for careless driving. The 10 states listed above all count that as their most distinctive offenses.