Pencils down! While students covered by auto insurance policies are not evaluated directly on their driving, their grades do matter. GPA is used as a proxy for risk, and high marks could save you a pretty penny. 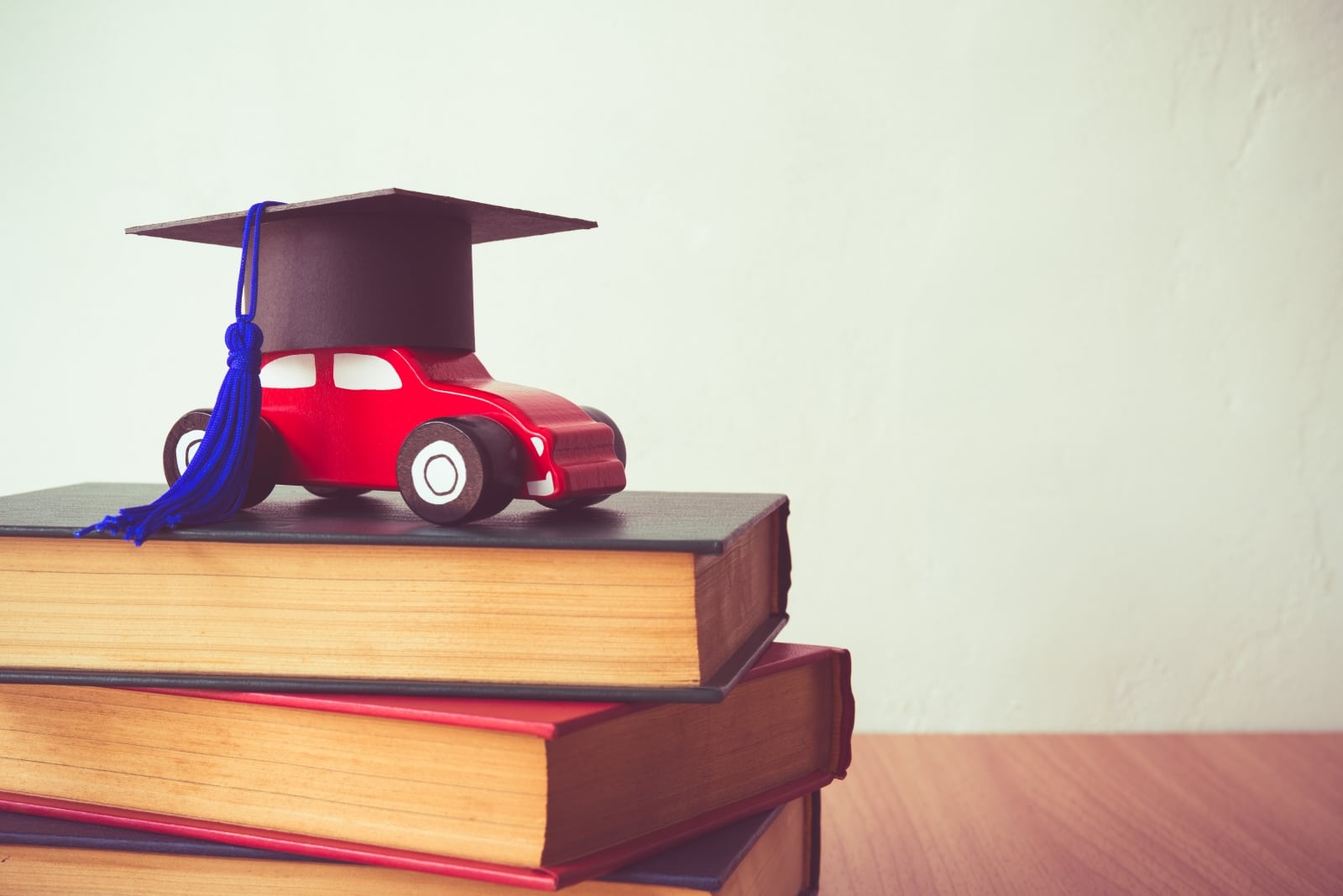 Click here to see the States With the Smartest Drivers report for 2020.

The school year is winding down and summer is fast upon us. While the most critical aspects of an education are the skills and relationships gained along the way, the grades one earns can have financial consequences beyond just prospective post-grad salaries.

Many insurance companies use high GPAs as indicators that one is a safe driver, and therefore less likely to file a costly claim in the future. Once they predict that a driver will be less expensive to insure, they offer them a coveted good student discount.

Young adulthood is a minefield of exorbitant expenses running the gamut from student loans to first apartments. There’s no reason not to jump at every opportunity for savings during this time, which is why it can be wise to compare car insurance policies to maximize available discounts on sites like Insurify. So with that in mind, let’s check out the states with the strongest showings for good student discounts. 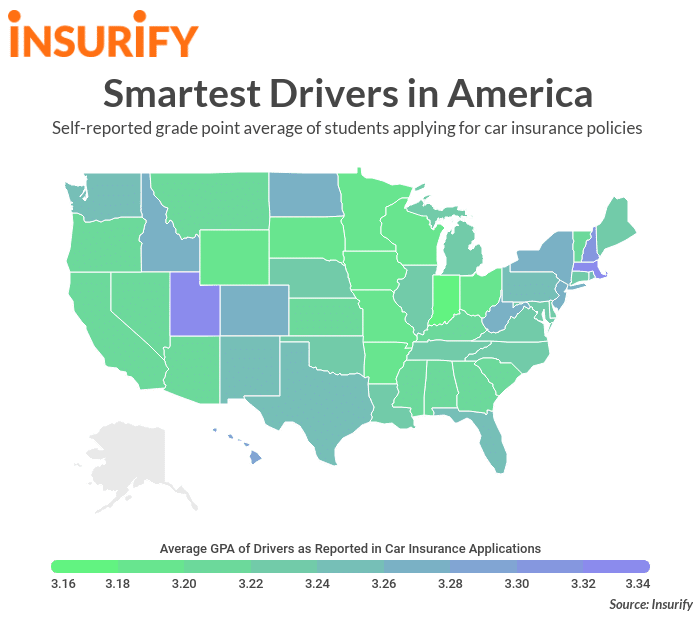 To determine the states whose drivers have the strongest GPAs and therefore the best standing in terms of good student car insurance discounts, the data science and research team at Insurify, a car insurance comparison website, turned to their database of over 1.6 million insurance applications. In applying for coverage, motorists identify if they or any other driver on their policy is a student, and if so, report their corresponding grade point averages. These were then aggregated and averaged by state. Alaska was excluded from analysis for insufficient data. Statistics on graduation rates originate from the U.S. Department of Education’s National Center for Education Statistics 2017 report, ACT scores are from the 2018 Condition of College and Career Readiness report, 2018 SAT statistics are reported by the College Board, and 2017 truancy rates are disclosed by the Annie E. Casey Foundation’s Kids Count Data Center. Truancy is defined as the rate of teenagers aged 16-19 neither attending school nor working in each state.

Kicking off our list is Idaho, with an average GPA of 3.259. Home to only 15 colleges and universities, Idaho is nonetheless here to prove its academic merit by ranking within the top 10 states with the highest grades nationwide. However, this strong average GPA does not translate to stellar scholastic statistics across the board. Idaho ranks within the bottom 10 states for graduation rate and within the bottom five for average SAT scores.

Save yourself the hassle, and use these sites to compare homeowners insurance today.

How can you know which are the best insurance comparison sites? We ranked them for you.

We proceed to North Dakota, a state that boasts one of the highest average GPAs in the country at 3.26. Not only that, but the Roughrider state also claims the highest mean SAT score on this list and the third highest in the country overall, trailing only fellow northern states, Minnesota and Wisconsin. To round out these impressive accomplishments, North Dakota also has the lowest truancy rate nationwide along with Massachusetts and Minnesota.

Following the noteworthy performance of North Dakota’s students, Colorado’s statistics are more of a mixed bag. On the one hand, the state is within the top 10 in the U.S. for GPA, high ACT scores, and low rates of truancy. However, on the other, it is also within the bottom 10 for average SAT scores and high school graduation rate, the latter being the lowest on this top 10 ranking.

Are you an Uber or Lyft driver? Discover your happy place with the best rideshare insurance.

Home to two of the 15 oldest universities in the nation, Princeton and Rutgers, New Jersey has a long legacy of top-tier education. Continuing that legacy, the Garden State claims the eighth position on this list. Not only does New Jersey fall within the top 10 states in America for mean GPA, but it also possesses the second highest graduation rate in the country. Nine out of 10 New Jersey high school students go on to graduate—ranking it the highest of any state in this top 10.

New York is known as a state of opportunity, and that opportunity begins in the classroom. Along with an impressive GPA, the state also touts the fourth highest average ACT score in the United States. This is an interesting accomplishment, as the vast majority of students in New York take the SAT as their standardized test of choice. When New Yorkers go out of their way to take the ACT, it appears that they mean business.

West Virginia is known for scenic roadways that wind through beautiful Appalachian landscapes. But how smart are the drivers who traverse them? It depends on which statistics you consider. The state has one of the highest mean GPAs in America along with one of the top 10 graduation rates in the country. That being said, the Mountain state also has the second lowest SAT score and the highest truancy rate nationwide.

As one of the states in the direst need of road repair according to TRIP, Hawaii drivers have to be smart when navigating unmaintained rural roadways. Luckily, their reported average GPA ranks them amongst the top five smartest states in the country. Unfortunately, the good news ends there. Hawaii has the lowest mean ACT score on this list and the fifth lowest in the United States. Additionally, the state has one of the highest truancy rates in America—nearly 30 percent higher than the national average.

For drivers still in the renters economy, consider bundling car and renters insurance.

Students in New Hampshire have a great deal about which to be proud. Not only do they have one of the highest average GPAs in the country, but they also have the third highest ACT scores, one of the lowest rates of truancy, and the tenth highest graduation rate nationwide. In fact, their average ACT score is a full 21 percent higher than the national mean and their share of teenagers who are neither working nor in school is almost 30 percent lower.

The Beehive State is the first on this list to break a B+ average GPA. Not only that, but Utah’s graduation rate, SAT scores, and truancy rate are all better than the national statistics. That being said, there is far from universal support for standardized evaluations in the state. This report comes in the midst of controversy over parents increasingly opting students out of end-of-the-year exams and new legislation that allows educators to incentivize students’ effort and participation in response.

Massachusetts is an academic giant, with nearly 100 colleges and universities located within 50 miles of Boston alone. Living up to this lofty reputation, the Bay State also reports the highest average GPA in the country. Not only this, but the state’s mean ACT score, 25.5, is the second highest nationwide at 23 percent higher than the national score. Moreover, Massachusetts has a truancy rate of only four percent—57 percent lower than the national share and the lowest in America overall.