Staying focused in the classroom can help you earn good grades, but did you know that it can also help you earn a discount on your car insurance? 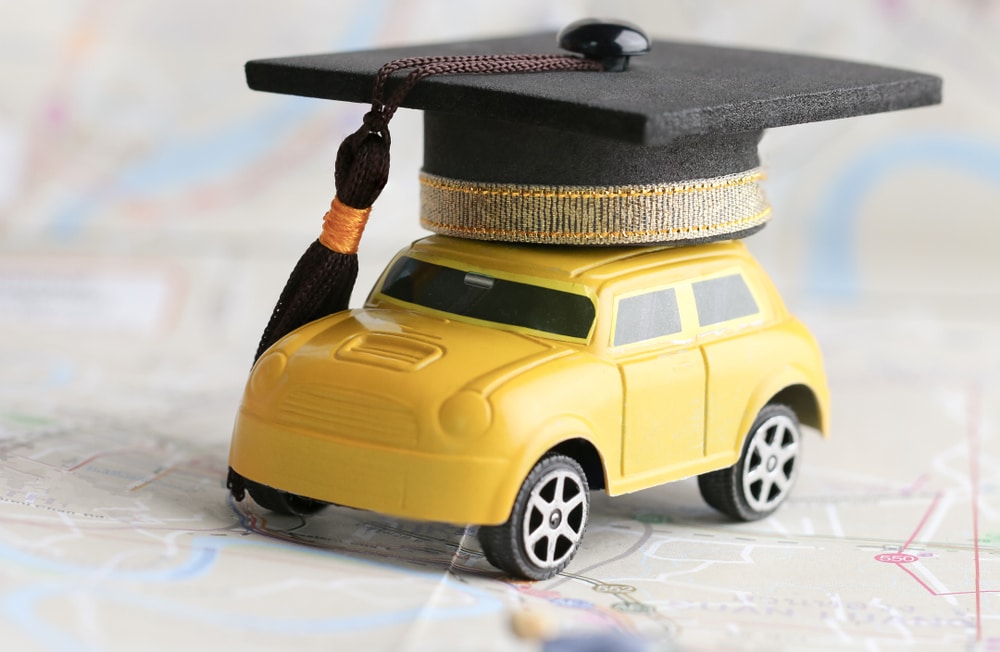 Strong grades can help lead to benefits such as college scholarships, summer internships, and even selective jobs.

Earning those coveted A’s doesn’t only help in the job market, though. If you’re a student with an auto insurance policy, maintaining a high GPA can lead to financial savings. Many insurance companies offer significant discounts for good students, as good students are considered less risky drivers.

To learn more, data analysts at Insurify, a car insurance comparison website, decided to investigate which states around the country give out the most good student discounts. Without further ado, these are the 10 states that boast the highest average GPAs. 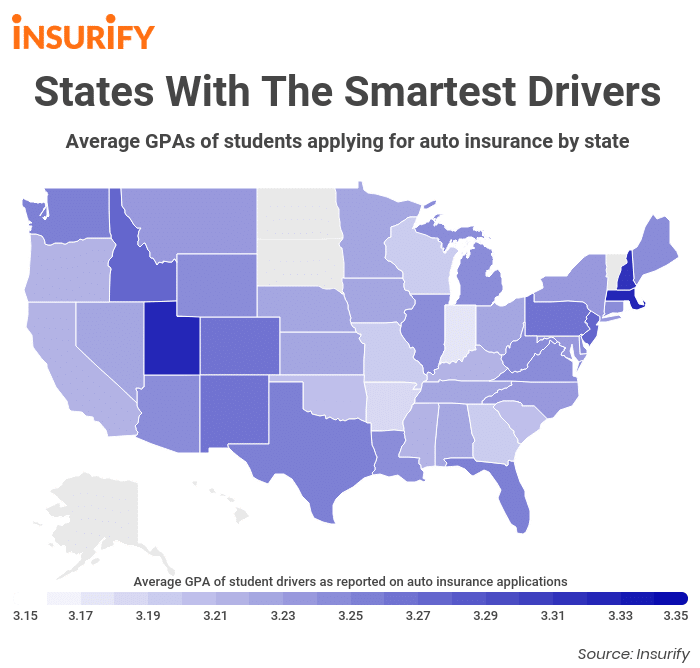 To determine which states have the highest cumulative GPAs, the data science team at Insurify, a platform that lets users compare car insurance rates, referred to their database of over two million car insurance applications. To apply for auto insurance quotes, interested motorists input personal and vehicle information, including whether a driver on their policy is a student. If a student is on the policy, the applicant reports their cumulative GPA to potentially qualify for a good student discount. These GPAs were then combined and averaged by state to discover which states had the highest average GPA.

Additional data on the average SAT score in each state was gathered from the College Board’s 2019 SAT state reports, while numbers regarding average ACT scores were taken from the ACT’s state-by-state reports for 2018. Finally, the most recent statistics about the rate of chronic absenteeism in each state (defined in many states as missing 10 percent of the school year) come from the United States Department of Education’s Civil Rights Data Collection for the 2015-16 school year.

States With the Highest GPAs

Florida kicks off the countdown, ranking tenth in the nation with an average GPA of 3.256. This state has a comprehensive state university system with 12 separate schools including the University of Florida and Florida State. Interestingly enough, though the Sunshine State excels in the GPA department, their education system is lacking in other areas. Specifically, Florida’s average SAT and ACT scores are seventh-lowest nationwide and a full point below the national average, respectively. Florida also has an above-average rate of chronic absenteeism.

Shop for car insurance with Insurify and you’ll never have to spend a full day comparing quotes again.

Find out just how much you could be saving with after you compare auto insurance quotes.

Home to Penn and its famous business school, Wharton, Pennsylvania has a host of notable higher education programs and the 10th best Pre-K through highschool education system among all 50 states, according to USNews rankings. That ranking appears to be more than fair. Not only does Pennsylvania’s aggregate SAT score exceed the national average by 25 points, it also ranks in the top 15 for average ACT scores and the top 10 for average GPAs.

Colorado is perhaps most famous for its beautiful mountains and ski resorts, but it also has a notable education system. In addition to holding an average ACT score that is more than three points greater than the national average, the Centennial State ranks 11th best among all states on the US News Education Rankings, which take into account both K-12 schools and colleges and universities. That said, Colorado’s average SAT score is well below the national mean, and its chronic absenteeism rate is 19 percent higher than average, so there is certainly still room for improvement.

Curious about where to buy gap insurance? Check out our guide to learn more.

Don’t get caught without coverage when you need it most. These affordable insurance quotes can save you a pretty penny in the event of an accident.

New Mexico holds the seventh spot on the list, with an average GPA of 3.269. Despite this, the Land of Enchantment is significantly behind the curve in other education metrics. New Mexico has the worst public school graduation rate nationwide at just 74 percent, a rate of chronic absenteeism above the national average, and an average ACT score that is more than a full point below average.

Unlike New Mexico, New Jersey excels in most education metrics. The Garden State has above-average standardized testing scores and below-average rates of chronic absenteeism. Furthermore, New Jersey has the second-best K-12 schooling in the country, according to the USNews Pre-K-12 education rankings, and a public school graduation rate that is tied for the best in the country at 91 percent.

Use this car insurance cost calculator to find the best policy for you. You never know when you’ll need it the most.

Home and auto insurance quotes are available today – compare, discover, and save.

Idaho is one of nine states in which at least 99 percent of high school graduates are reported to have taken the SAT. Despite this, Idaho’s average SAT score of 993 is actually lower than all but four other states. The Gem State still performs well according to other numbers though, with an average ACT score well above the national average, and the fifth-best average GPA in the country.

The smallest state in the country still packs a punch in the education department. Home to Brown, one of the nation’s most prestigious universities, Rhode Island’s average ACT score of 24.2 is better than all but five other states. It also boasts an average GPA of 3.287 — the fourth highest in the country. However, the state does have a chronic absenteeism rate among the five worst in the country, and an SAT score that is also below the national average.

New Hampshire’s southern New England neighbor, Massachusetts, might have the more recognizable schools, but the Granite State nonetheless has one of the United States’ best education systems. Its average ACT score of 25.1 is third-best in the country, and its chronic absenteeism rate is 13 percent below the national average. According to USNews, New Hampshire also has the third-best PreK-12 schooling system in the country, thanks in part to the presence of famous boarding schools like Phillips Exeter.

Massachusetts is home to what some consider the nation’s largest college town: Boston. After all, the city boasts a handful of the nation’s top schools, from Harvard and MIT to Boston College and Northeastern. The state has the best PreK-12 schooling system in the country, according to US News, and this ranking is supported by Massachusetts’ significantly above-average ACT and SAT scores. Thus, it’s no surprise that the Bay State has one of the highest average GPAs in the country.

After placing second in Insurify’s ranking of states with the highest GPAs last year, Utah ascends to the top spot in 2020, with a 3.327 average GPA. Though it might not have schools with the same name recognition as Massachusetts, Utah’s higher education system still ranks as the country’s sixth-best overall, according to US News. Add in standardized test scores and a graduation rate that are all higher than the national average, and it’s easy to see why Utah is at the top of the list.