Rude drivers are everywhere, but these ten states have more than their fair share of motorists who demonstrate inconsiderate driving behavior. 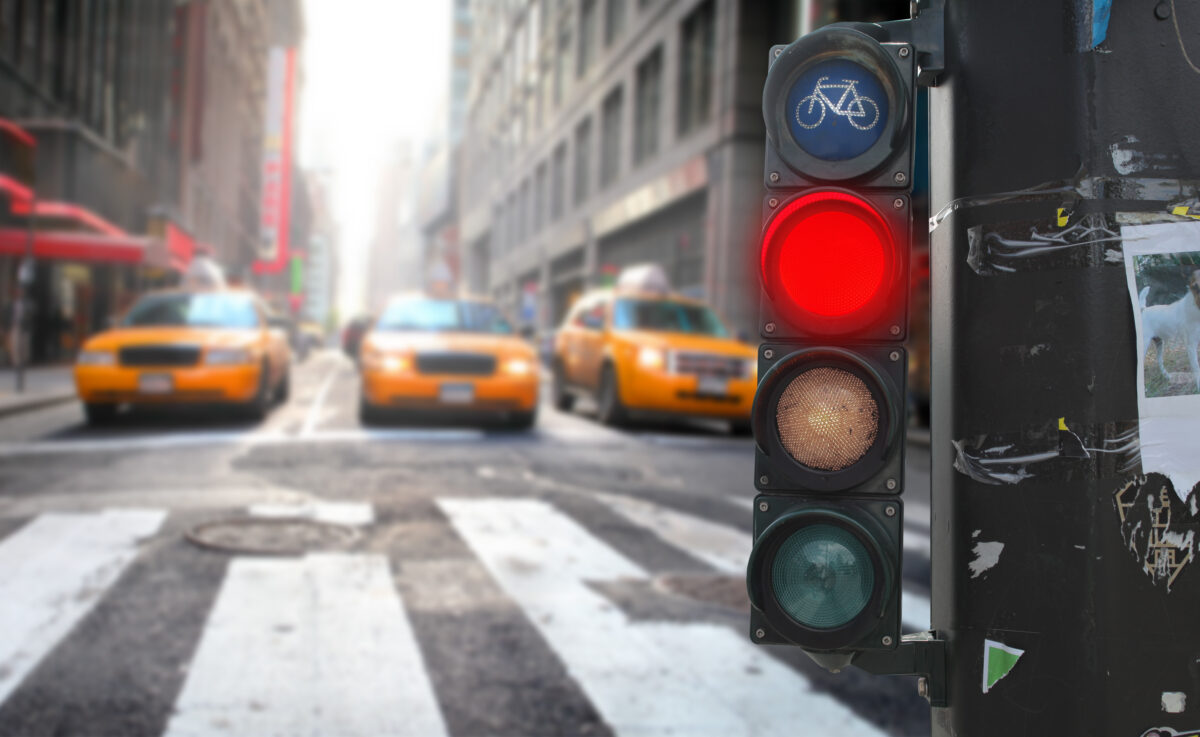 Everyone appreciates having their own space on the road. Leaving a proper following distance and being courteous with ceding the right of way makes driving both safer and less stressful for everyone involved. Unfortunately, some drivers adhere to these principles less often than they should, which can lead to serious consequences. Rude driving behavior — such as failing to yield to another driver or running a stop sign — not only endangers everyone else on the road, but takes a huge toll on the inconsiderate driver’s wallet, too. Insurify’s 2021 Insuring the American Driver Report found that having a single rude driving infraction on record increases a driver’s yearly insurance premium by an average of more than $400 compared to what drivers with a clean history spend.

While ill-mannered driving happens everywhere, motorists in certain corners of the country are more likely to engage in such behavior. Curious to see where drivers most often exhibit impolite road etiquette, the data scientists at Insurify referred to their database of over 4.6 million insurance applications to identify the ten states with the rudest drivers in 2022. 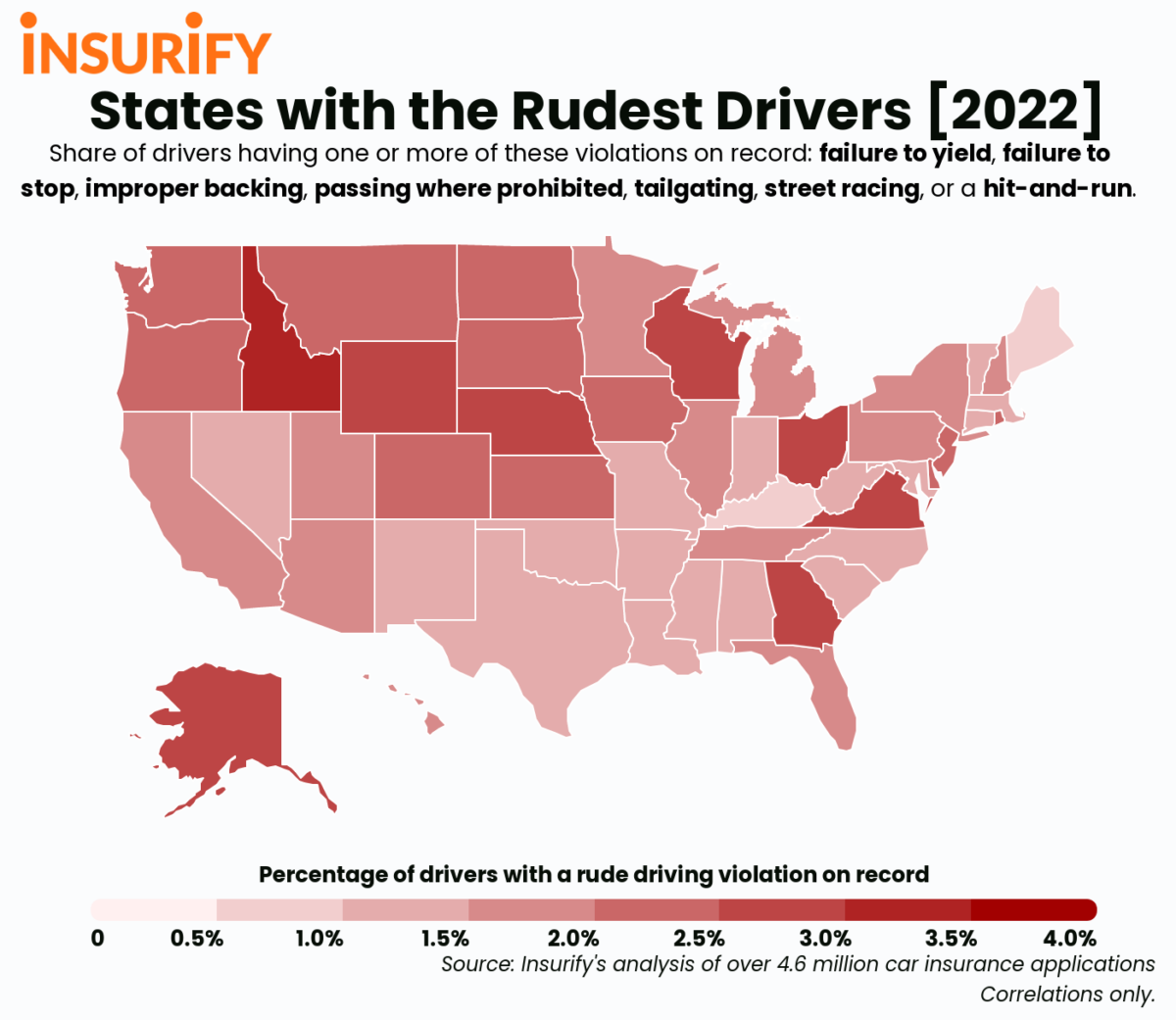 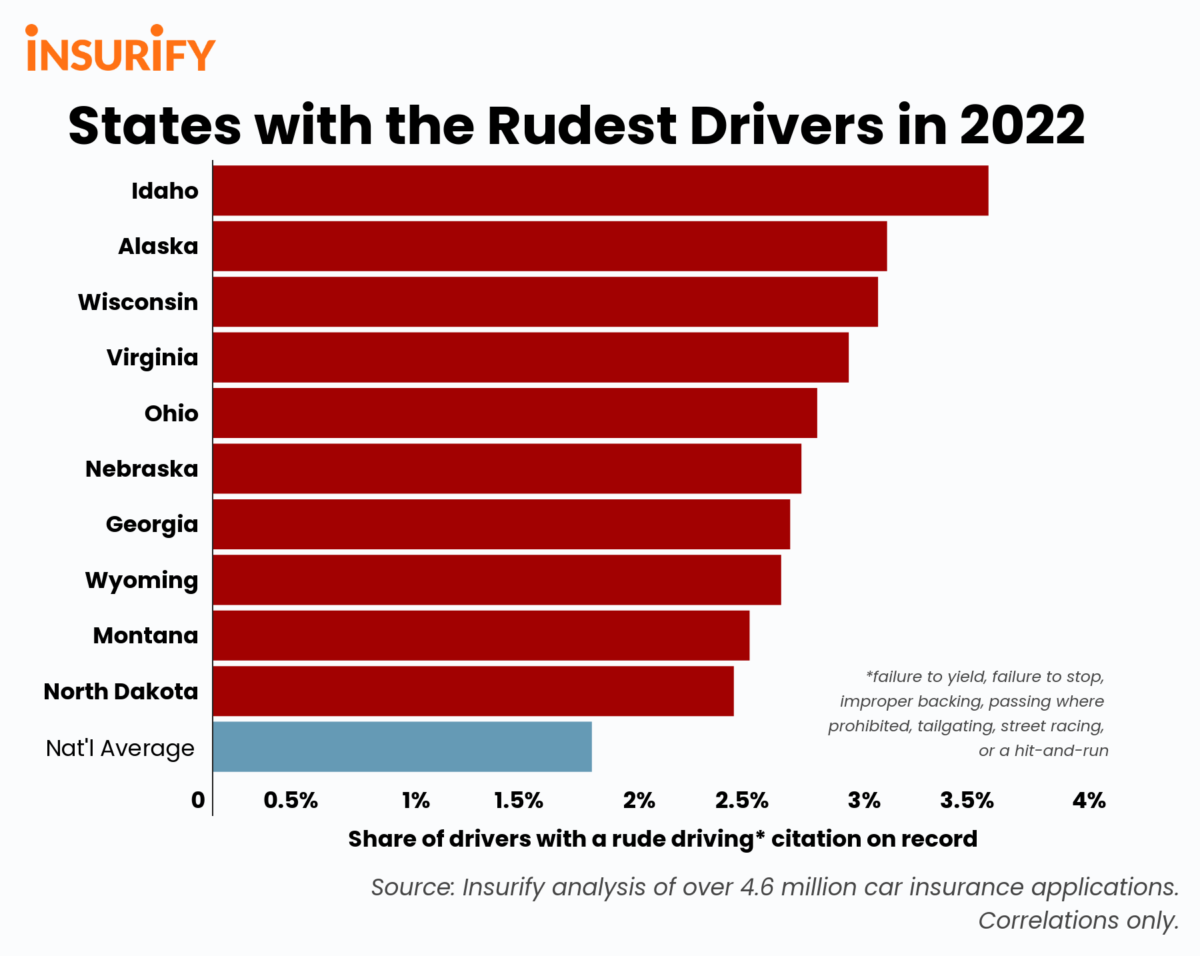 The data scientists at Insurify, a platform to compare auto insurance rates, referred to their database of over 4.6 million car insurance applications to identify the ten states with the rudest drivers in 2022. When applying for car insurance, applicants disclose their state of residence and any prior violations on their driving record within the past seven years. Insurify determined the following violations as most indicative of rude driving: failure to yield violations (failure to yield the right of way, failure to yield to a pedestrian), failure to stop violations (failure to stop for a red light, school bus, or stop sign), improper backing, passing where prohibited, tailgating, street racing, and hit-and-runs.

Top 10 States With the Rudest Drivers

With a rude driving citation rate of 2.31%, North Dakota ranks tenth on the list of the rudest driving states in America. North Dakotans have an especially hard time coming to a full stop at stop signs, perhaps because they feel especially rushed, or perhaps just because the state’s famous wintry conditions make the roads more slippery than many anticipate.

Everybody’s talking about it–Insurify’s site to compare car insurance quotes is the best way to save money on auto insurance. Fast, accurate, and all online: insurance shopping has never been this easy.

Ever wonder what’s the simplest way to secure the cheapest insurance in California? Golden State drivers can find answers to all their coverage-related questions and more, from Insurify’s experts.

Montana’s nickname, The Treasure State, evokes many of the state’s wonders, from its stunning open plains to its soaring mountain peaks. However, it probably doesn’t call to mind Montana residents’ record of impolite driving citations, which is less than pristine. Indeed, Montana’s rude driving infraction rate of 2.38% is nearly 1.3 times greater than the national average.

Like Montana, Wyoming is home to beautiful and rugged mountain terrain at the heart of the American West. The two states even share a border that spans over 300 miles and runs through famed Yellowstone National Park. The two states also share a penchant for less-than-courteous driving behavior, at least as evidenced by driving infraction rates. With 2.52% of Wyoming drivers having a prior rude driving citation on record, the state ranks eighth on the list of the rudest driving states in 2022.

Though many Southern states — highlighted by Kentucky — have impressively high rates of polite driving, Georgia motorists do not follow suit with the rest of the region. 2.56% of Georgia drivers have a prior rude driving infraction on record, a share that’s 34% higher than the national average. Georgian’s most common rude citation? Like nine states in the rankings, it’s failure to stop at a stop sign.

Situated squarely in the nation’s farm belt, Nebraska is home to those quintessentially American amber waves of grain. Fittingly, the state’s official flower is goldenrod. But Cornhusker drivers aren’t taking home gold (or silver, or bronze) in 2022 when it comes to courteous driving rates. 2.61% of Nebraska drivers have a rude driving violation on record, a share that’s 36% greater than the national average.

Savings as sweet as (peach) pie! Insurify’s got plenty of options for cheap car insurance in Georgia when Peach State drivers compare online, in real time.

Dissatisfied with your current car insurance quotes in South Carolina? Let Insurify find the best–and most personalized–deals by comparing all your options for you. See how much you could save!

Ohio drivers have a tendency to get into trouble on the roads, as the state ranks first overall on Insurify’s list of the worst driving states in 2022. Unsurprisingly, that knack for accruing moving violations of any kind also extends to those deemed as indicative of rude driving behavior by Insurify’s measures. With a rude driving infraction rate of 2.68%, Ohio places fifth on the list of states with the rudest drivers in 2022.

With 2.82% of Old Dominion drivers having a prior rude driving citation on record, Virginia motorists exhibit discourteous behavior at the fourth-highest rate in America. Indeed, they do so 40% more often than the national average. Virginia drivers most commonly fail to stop at stop signs, and they run red lights at elevated rates (47% higher than the national average), too.

If you’re looking for cheap car insurance in North Carolina, you’re not alone. Fortunately, Insurify’s got NC drivers covered to help insure your vehicle without breaking the bank.

Constitution State drivers can find the latest and greatest car insurance quotes in Connecticut by comparing offers from multiple providers with Insurify.

Despite the state having a reputation for being “Midwest Nice”, some Wisconsin drivers don’t always behave that way on the roads. Wisconsin ranks third on the list of states with the rudest drivers in 2022, with 2.95% of its motorists having a prior rude driving citation on record.

At only 1.2 persons per square mile, Alaska is by far the least densely populated state in the country, meaning its drivers are less likely to encounter a fellow motorist when out on the streets. However, this might be tempting some Alaska drivers to bend the rules of the road, as evidenced by the state’s crazy-high rate of running red lights — over 2.7 times greater than the national average. Just because an intersection seems clear is no reason to engage in dangerous driving behavior, but Alaska drivers’ elevated rate of doing so places them second on 2022’s list of the rudest drivers by state.

When it comes to demonstrating high rates of rude driving behavior, Idaho motorists have no equal. Not only is the state’s 3.44% rude driving citation rate 51% higher than the national average, it’s also a full 15% higher than the next closest state’s. Idaho joins Montana, Wyoming, and Alaska as another state in the American West that couples gorgeous mountainscapes with less-than-pristine driving records.