Drivers who evade traffic laws live in every corner of the country, but these ten states are home to more rule-breaking motorists than anywhere else. 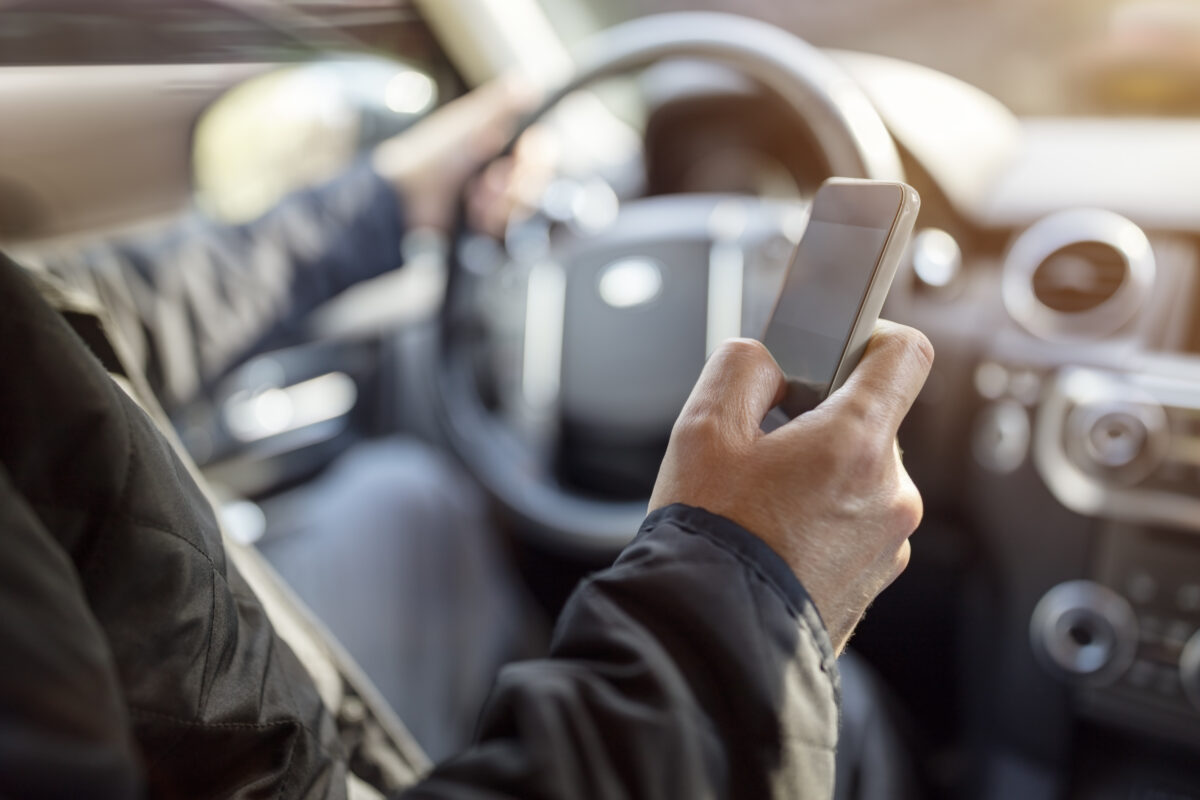 When states issued shelter-in-place orders at the beginning of the COVID-19 pandemic, many Americans saw the open, less congested roads as an excuse to drive more recklessly. Even as traffic levels have slowly returned to normal, drivers across the country are still practicing the bad driving habits they adopted during the pandemic’s early days. Such behavior has led to significant spikes in traffic fatality rates, as detailed in Insurify’s latest Insuring the American Driver Report.

These trends are occurring throughout the nation, but certain states are experiencing higher rates of rule-breaking behavior than others. While the vast majority of traffic violations do not result in life-threatening accidents, any citation brings risk of injury to others on the road, not to mention significantly higher insurance costs for the driver at fault. To see where drivers are most prone to violating traffic laws, the data scientists at Insurify turned to their database of over 4.6 million car insurance applications and identified the ten states with the worst drivers in 2022. 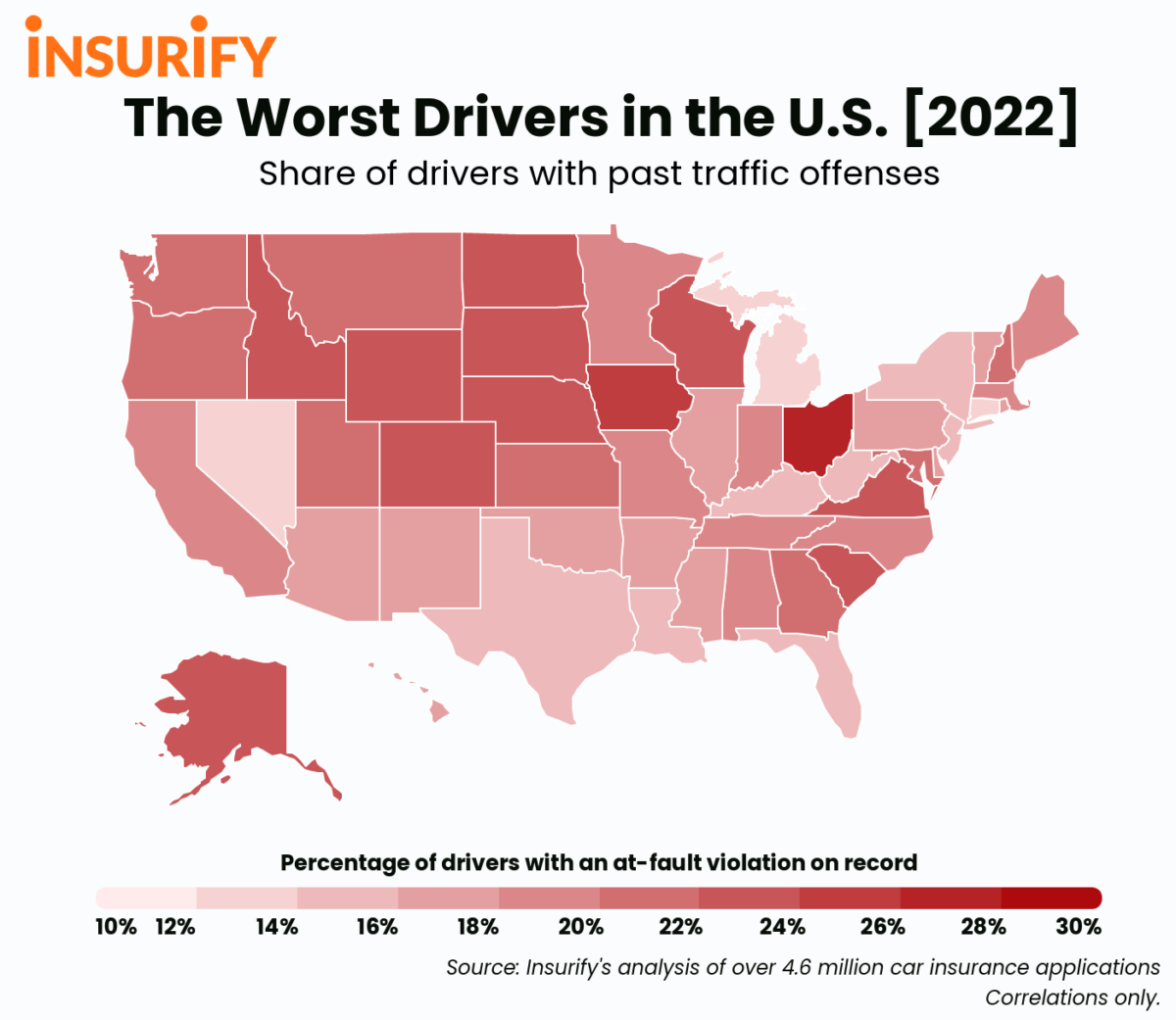 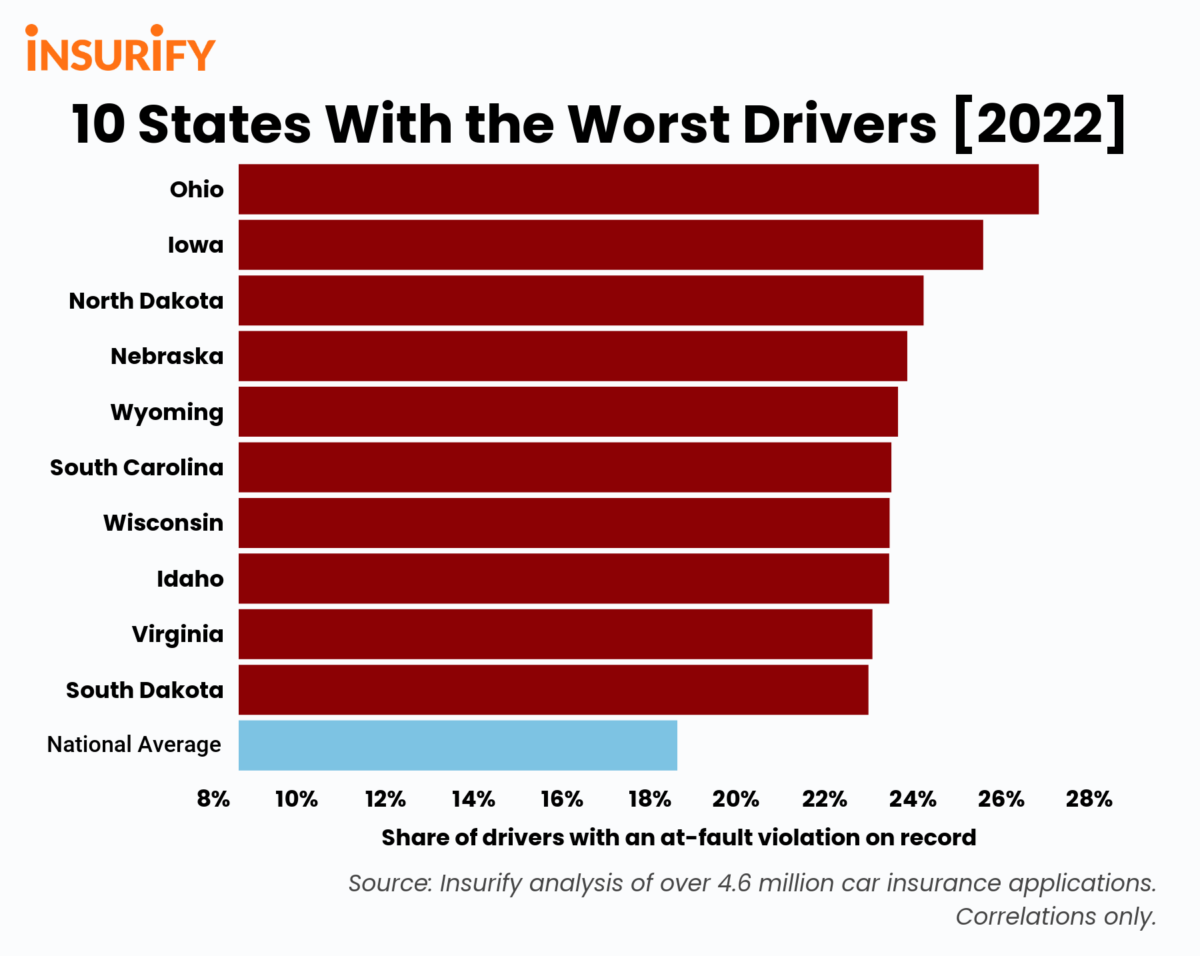 The data scientists at Insurify, an auto insurance comparison platform, referred to their database of over 4.6 million car insurance applications to identify the states with the worst drivers in the nation.

When applying for car insurance, applicants disclose their state of residence and any prior violations on their driving record within the last seven years. Insurify’s data scientists compared the number of drivers with one or more at-fault violations on record (including accidents, DUIs, failures to stop, speeding, reckless driving, passing violations, and other citations for illegal driving behavior) to the total number of drivers applying for car insurance in each state. The ten states with the highest proportion of drivers with at-fault incidents on record earned a spot in the rankings of the states with the worst drivers in America. Traffic fatality rates by state are from the Insurance Institute for Highway Safety’s most recent Fatality Facts report.

Which state has the worst drivers in America?

Believe it or not, Ohio has the worst drivers of any state in 2022. 26.13% of Ohio drivers report an at-fault traffic violation on record, a share that's 46% greater than the national average.

The distinguished faces of America’s most celebrated presidents gaze out from Mount Rushmore, South Dakota’s famous landmark. Their stern expressions, however, might be caused by South Dakotans’ penchant for violating traffic laws. 22.27% of the state’s drivers have a prior traffic citation on record, a share that’s 24% higher than the national average.

It’s no secret–Insurify’s car insurance quotes comparison site is the best way to save money on auto insurance. All online, in real-time: insurance shopping has never been this easy.

What’s the simplest way to secure the cheapest insurance in California? Answers to all your coverage-related questions and more, from Insurify’s experts.

When people say Virginia is for lovers, they may mean lovers of evading traffic laws. 22.36% of Virginia motorists have an at-fault citation on their driving record, which is 25% higher than the national average. Such behavior, however, has not caused higher rates of traffic fatalities, as Virginia has 13% fewer fatalities per 100 million miles driven than the U.S. as a whole.

Idaho’s official nickname is the Gem State, but many of its drivers don’t have a sparkling record. 22.74% of Idaho motorists have an at-fault violation on their driving record, placing them eighth on the list of the worst driving states in 2022. Additionally, Idaho’s rate of traffic deaths per 100 million vehicle miles driven is 12% greater than the national average.

For Lone Star drivers, finding cheap car insurance in Texas is made easier when you let Insurify compare personalized quotes to find the best option for your wallet. Compare and see how much you could be saving today!

Savings as sweet as (peach) pie! Insurify’s got all of the best options for cheap auto insurance in Georgia when Peach State drivers compare online.

To find cheap auto insurance in South Carolina, let Insurify take the legwork out of shopping around by comparing all your options for you. See how much you could save!

With 22.75% of Wisconsin drivers having a prior violation on record, the state ranks seventh on the list of the worst driving states in 2022. Wisconsinites have a reputation for producing great beer, but unfortunately, they may not always enjoy it responsibly. Wisconsin drivers accrue a disproportionately high number of DUI violations which account for many of their citations overall. According to Insurify’s most recent analysis, Wisconsin also places fourth on the list of states with the most DUIs.

The beautiful seaside towns of Myrtle Beach and Hilton Head distinguish South Carolina as a premier vacation destination on the East Coast. South Carolina’s high share of drivers with a prior violation on record also distinguishes the state as one of the most dangerous in which to drive. Additionally, the state reports 1.73 traffic fatalities per 100 million miles driven, which is not only 56% greater than the national average, but the highest rate in the whole country.

Constitution State drivers can find the latest and greatest car insurance quotes in Connecticut by comparing offers from multiple providers with Insurify.

Wyoming has the second-lowest population density of any state in the country, so its roads are emptier than most. However, this extra space might entice some drivers to engage in riskier (and illegal) driving behavior, as 22.94% of the state’s motorists have a prior traffic violation on record. With a bad driving rate that’s 28% higher than the national average, Wyoming ranks fifth on the list of states with the worst drivers in 2022.

Most people probably don’t know that Kool-Aid was invented nearly 100 years ago in Hastings, Nebraska. Most people probably also don’t know that 23.15% of Nebraska drivers report a prior at-fault violation on record, though they might keep this in mind next time they’re traveling through the Cornhusker State. Indeed, that share of rule breaking motorists is 29% greater than the national average and places Nebraska fourth on the list of states with the worst drivers in 2022.

North Dakotans could do a better job driving in between the lines—literally. A given North Dakota driver is 31% more likely than the average American motorist to have a driving citation on record. Overall, 23.52% of the state’s drivers report an at-fault violation on record in 2022, ranking North Dakota third on the list of states with the worst drivers.

Though Iowa may be the Hawkeye state, its drivers don’t have perfect vision when reading the letter of the law. 24.87% of Iowa drivers report a prior driving citation on record, a share that’s 39% higher than the national average. All these violations have not translated into more traffic fatalities, however, as the state’s traffic deaths per 100 vehicle miles driven is 10% less than the overall U.S. rate.

With a driving violation rate that’s 46% greater than the national average, Ohio is the only state in which more than one out of every four drivers report a prior at-fault violation on record. This earns Ohio the dubious distinction of placing first on the list of states with the worst drivers in 2022. Like Iowa and North Dakota, however, its high rate of violations has not coincided with higher traffic fatality rates. The state’s rate of 1.01 deaths per 100 million vehicle miles driven is 9% lower than the national average.