Pickup Trucks With the Most Aggressive Drivers 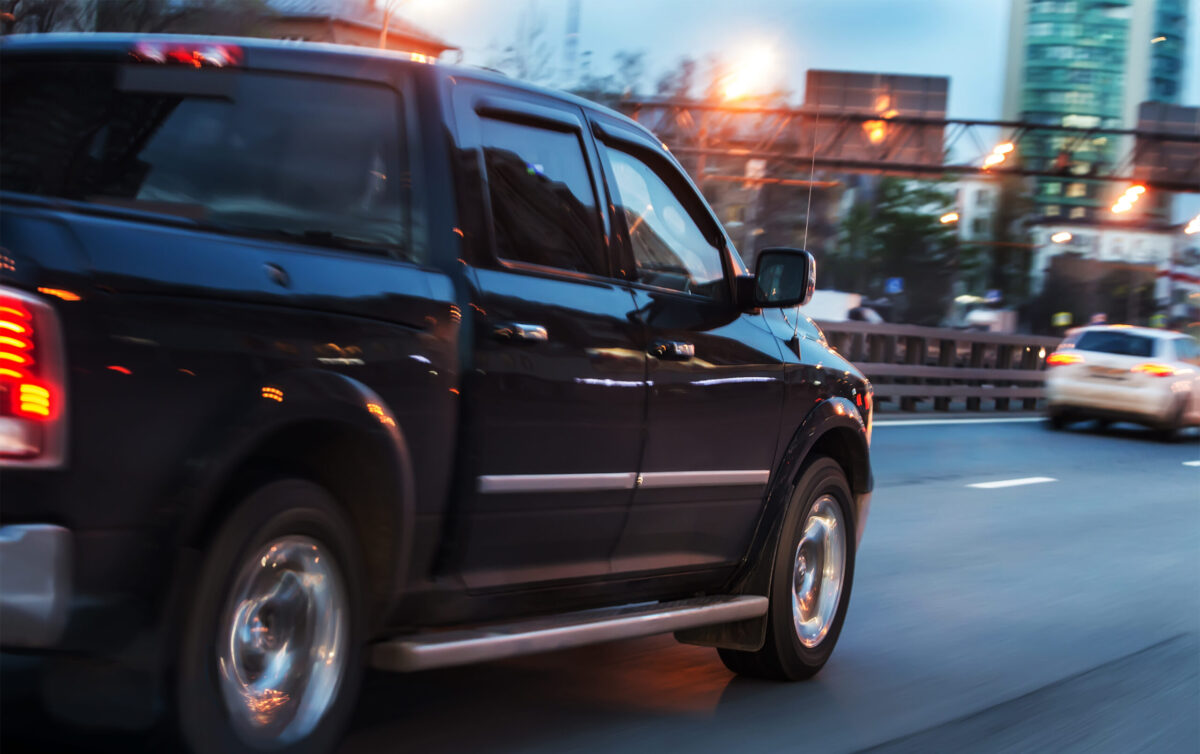 Driver reputations can be unfairly generalized stereotypes, but owners of these five pickup trucks really do exhibit the aggressive driving behavior often associated with their vehicle.

When it comes to America’s favorite vehicles, pickup trucks are in a class of their own. Their off-road capability and excellent towing capacity make them some of the most well-loved cars in the nation. In fact, the Ford F-150 is the most popular car in America, according to Insurify’s 2021 Insuring the American Driver Report. The Chevrolet Silverado and the Toyota Tacoma are also among the nation’s top five favorites, ranking ahead of practically every sedan, SUV, and crossover on the market.

In addition to their vehicle’s widespread popularity, pickup truck owners have also garnered a reputation when it comes to their driving behavior. Indeed, many Americans assume hostile driving is par for the course when it comes to pickup truck drivers, perhaps because pickups command more space than the average vehicle.

Curious to see which pickup truck drivers actually demonstrate the most extreme forms of aggressive driving behavior, the data scientists at Insurify turned to their database of over 4 million car insurance applications to determine the five pickup trucks with the most aggressive drivers. 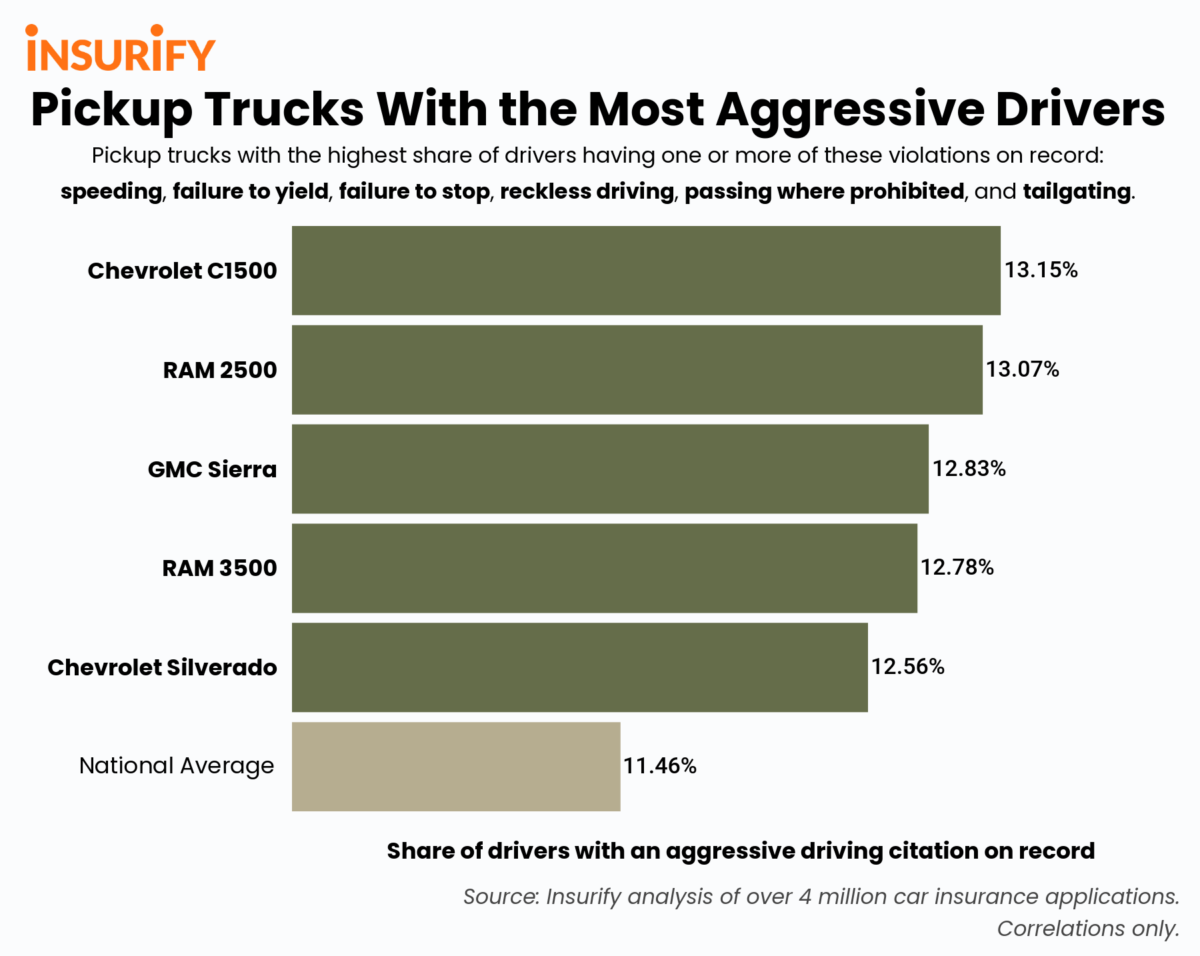 To identify the pickup trucks with the most aggressive drivers, the data scientists at Insurify, an auto insurance comparison site, referred to their database of over 4 million car insurance applications.

Each pickup’s MSRP comes from the most recent available model listed on Autoblog, and the average cost of a new car in 2021 comes from Kelly Blue Book’s June vehicle price data.

Which Pickup Trucks Have the Most Aggressive Drivers?

5 Pickup Trucks With the Most Aggressive Drivers

The Chevrolet Silverado is one of the most popular pickup trucks in America, earning praise for its quality, reliability, and affordable price tag. It’s also one of the most popular trucks among motorists that demonstrate aggressive driving behavior too often: 12.56% of Silverado drivers have an aggressive driving violation on record, a share that’s 10% higher than the national average. Besides speeding, Silverado drivers most commonly report citations for failing to stop at a stop sign.

Ever asked yourself where you can get no license car insurance? Look no further than Insurify. Explore your options today!

Getting a great car insurance rate is a lot easier than you might think. Just use Insurify, an insurance car quote comparison site, and watch the savings pile up!

With a 2022 MSRP starting at nearly $40,000, the RAM 3500 is one of the most expensive pickup trucks on the market, and for good reason—it comes standard with a 370 hp engine and a towing capacity over 13,000 pounds. It appears, however, that some RAM 3500 drivers have let all this power become too out of hand, as the model ranks fourth on the list of pickup trucks with the most aggressive drivers. The RAM 3500 is also the only pickup in the top five whose drivers’ most common non-speeding offense is failure to yield to another driver.

The GMC Sierra is the fifth-most popular pickup truck in America, according to Insurify’s analysis, but its owners actually demonstrate aggressive driving behavior at the third-highest rate of any pickup in the nation. 12.38% of Sierra drivers report an aggressive driving citation on record, a share that’s 12% higher than the national average among pickup truck owners.

Insurify has all the best car insurance quotes, all in one place. Insurance shopping has never been easier.

Don’t hate the rate. Use Insurify to find cheap car insurance quotes and do your wallet a huge favor.

These are the best insurance comparison sites, according to our experts. Check them out today!

The Chevrolet C1500 truly exemplifies “oldie but goodie.” Even though Chevrolet discontinued the C1500 line over two decades ago, plenty of C1500s are still going strong on the roads. Unfortunately, while Chevy C1500 drivers have clearly taken attentive care of their own vehicles, some have not demonstrated that same consideration towards their fellow motorists. 13.15% of C1500 drivers have an aggressive driving citation on record, ranking the Chevy C1500 first on the list of pickup trucks with the most aggressive drivers.

← Cities with the Greatest Rise in Home Prices in 2021