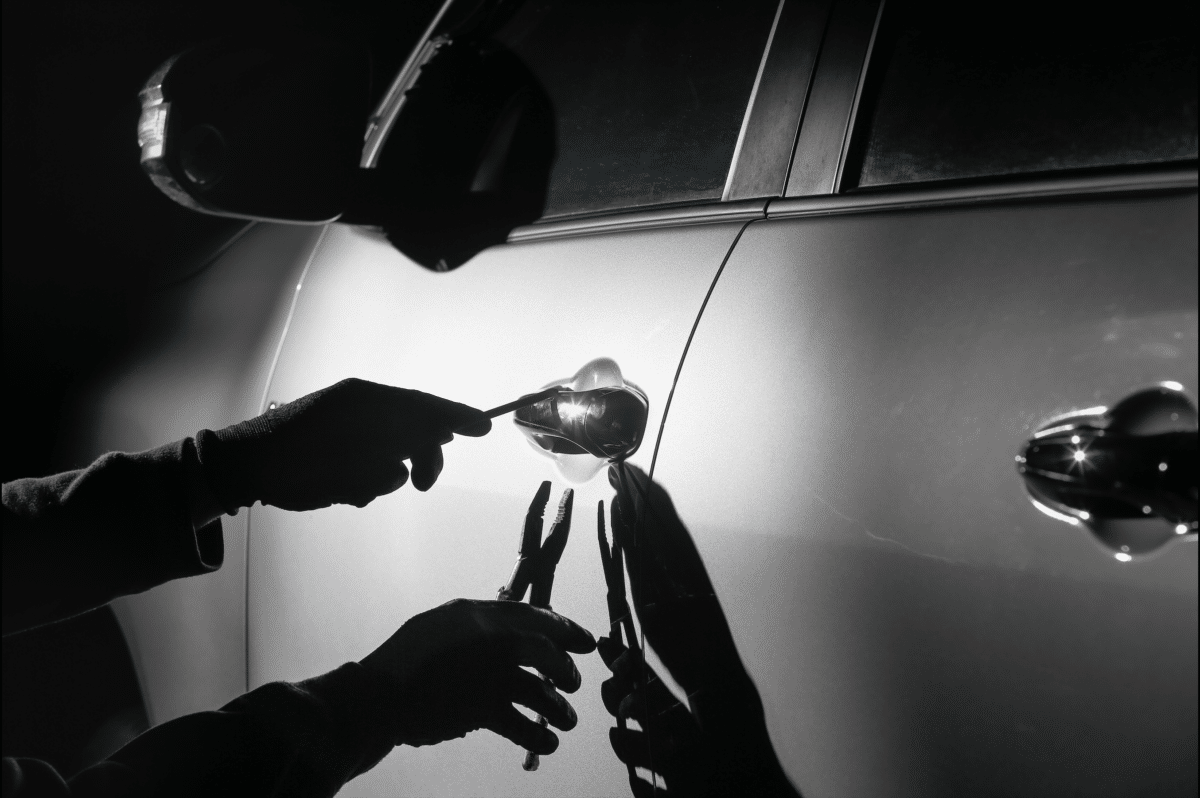 No matter what you drive, there’s always the unfortunate risk that you could fall victim to car theft. These ten vehicles are the most stolen cars in America.

After decades of steadily declining rates, auto thefts have increased dramatically in recent years. According to the National Insurance Crime Bureau’s (NICB) latest Hot Wheels report, there were reported 880,595 vehicle thefts in 2020, up 11% from 794,019 in 2019. Nationwide, about one vehicle was stolen every 36 seconds.

While there isn’t one clear leading factor for this sudden spike in thefts, a likely contributor is the COVID-19 pandemic and its nationwide economic repercussions in 2020. Still, owner complacency remains a major contributing factor to vehicle theft, so removing keys from the ignition, keeping the car locked, and parking in well-lit areas are some of the best ways to avoid carjacking.

To raise awareness of this recent increase in car thefts and help educate drivers on anti-theft safety, the data scientists at Insurify analyzed the most recent NICB Hot Wheels report to identify the most stolen cars in America. 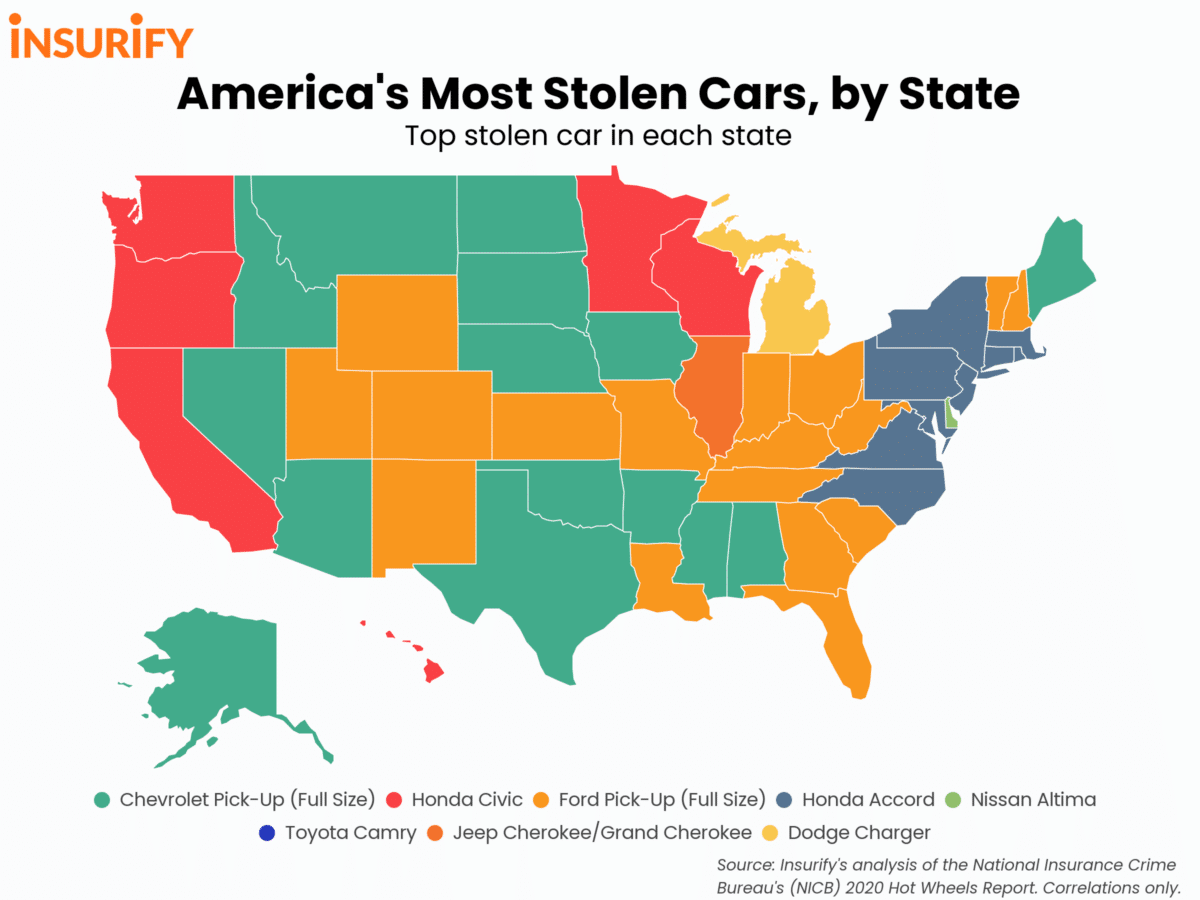 The data scientists at Insurify, a site to compare auto insurance quotes, referred to the National Insurance Crime Bureau’s (NICB) latest Hot Wheels report to determine the ten most stolen vehicles in the nation. This report includes data on the number of thefts and the most stolen model year, as well as the most stolen car model in each state.

To determine how often each of the top ten car models is stolen in the United States, Insurify’s data scientists calculated theft rates per 1,000 of each car model. First, they determined the proportion of each of the ten most stolen cars’ ownership compared to all other car models from Insurify’s proprietary database of over 4 million insurance applications. Then, they calculated the total number of each of the top ten car models on the road by applying those proportions to the total number of cars on the road in the United States (276.49 million, according to the latest report by Statista). From these totals, they calculated car theft rates based on the number of thefts for each model.

Each car’s MSRP comes from the appropriate year listed on Autotrader, and the average cost of a new car in 2021 comes from Cox Automotive’s July vehicle price data.

Top 5 Most Stolen Cars in America

Dodge sells its full-size pickups under the RAM moniker, with the RAM 1500 model being the most popular of the brand’s options. Unfortunately, the RAM pickup line was also popular among car thieves in 2020, as full-size Dodge pickups were the tenth-most stolen vehicles in America. An estimated 4.6 out of every 1,000 RAM trucks were stolen in 2020 alone.

Your personal information isn’t everyone else’s business. Learn how to get an anonymous car insurance quote with Insurify.

Ever asked yourself, where can I get no license car insurance? Look no further than Insurify. Explore your options today!

Since its inception in the mid-1990s, the Honda CR-V has offered reliability and affordability for drivers seeking a smaller SUV. As such, the car is favored by motorists across the country, though it does not have a particular geographic concentration akin to the Honda Civic’s heavy prevalence on the West Coast or the Accord’s popularity on the East Coast. While the CR-V was the ninth-most stolen car in America in 2020, it did not have the highest theft rate in any individual state.

The Toyota Corolla is a perennially affordable and well-renowned car, making it a popular choice for drivers across the country. Its theft rate of 2.2 thefts per 1,000 cars is less than half that of the Honda CR-V, even though carjackers swiped over 200 more Corollas than CR-Vs in 2020. In addition to its widespread popularity, the Corolla also stands out because brand new Corollas were stolen more often in 2020 than Corollas made in any prior year. This model ties for the newest among all the vehicles in the top ten most stolen cars in America.

Getting a great car insurance rate is a lot easier than you might think. Just use Insurify, an insurance car quote comparison site, and watch the savings pile up!

Insurify has all the best auto insurance quotes, all in one place. Insurance shopping has never been easier.

The GMC Sierra—the flagship model among GMC’s full-size pickups—earns critics’ praise for its engineering and tech-savvy features, but the GMC pickup line has never been as popular as other higher-profile pickup trucks. And yet, over 13,000 GMC pickups were carjacked in 2020, placing them seventh on the list of the ten most stolen cars in the country. Thieves stole a whopping 8.3 per 1,000 GMC trucks in 2020, the second-highest theft rate among the ten most stolen vehicles overall.

The Nissan Altima is the second vehicle among the top ten most stolen cars in America to have thieves target its newest model most often in 2020. This might come as a surprise since there’s a common belief that carjackers tend to single out older vehicles due to their outdated security technology. Its theft rate per vehicle supports this logic: even though the Altima was the sixth-most stolen car in 2020, it had the lowest thefts per 1,000 vehicles of any car in the top ten, indicating there were simply more of them available to be stolen.

Don’t hate the rate. Use Insurify to find the cheapest car insurance and do your wallet a huge favor.

Get a quick estimate using Insurify’s car insurance calculator, personalized for your persona and history.

These are the best sites to shop auto insurance online, according to our experts.

The Toyota Camry has been a model known for its functionality and reliability for decades. It was also a top target among carjackers in 2020, ranking fifth on the list of the most stolen cars in America. Like the Nissan Altima, however, its relatively low theft rate per 1,000 vehicles speaks more to its extreme popularity than to its particular appeal to car thieves.

With over 30,000 thefts in 2020, the Honda Accord is fourth on the list of America’s top ten most stolen cars. The model saw an exceptionally high number of thefts on the East Coast: all nine states in which it was the most stolen vehicle border the Atlantic Ocean. The most common manufacture year—1997—among Accords stolen in 2020 is also the farthest back of any car in the top ten by a full three years.

Despite the Honda Civic being similarly popular as the Toyota Camry, carjackers stole more than twice as many Civics as Camrys in 2020. On a per-vehicle basis, the Civic had 94% more thefts than the Camry and even 27% more thefts than the Accord. Unsurprisingly, the most common manufacture year of Civics stolen in 2020 was 2000, one of the last years before the Civic sported anti-theft technology. Additionally, the 2000 Civic is the cheapest most-targeted model year of any vehicle on this list, priced at just over $10,000 at the time of its release.

With nearly 41,000 thefts in 2020, Chevrolet pickup trucks are the second-most stolen vehicles in America. Though carjackers swiped a higher number of Ford pickups overall, Chevy trucks had the highest number of thefts per 1,000 vehicles of any car in the top ten most stolen car models. Thieves targeted nearly 1% of all Chevy pickups in 2020, a share that’s 14% higher than the GMC Sierra’s second-highest theft rate among the top ten most stolen cars.

Ford pickup trucks were the most stolen vehicles in America in 2020, with car thieves swiping over 44,000 of them. Ford’s pickups taking the top overall spot shouldn’t come as too much of a surprise, as the brand’s full-size F-Series line is the most popular car in America. Still, F-Series models had a much higher number of thefts per 1,000 vehicles than many other of the nation’s most popular car models, including the Honda Accord, Honda Civic, and Nissan Altima, which all rank among the top five most popular cars in the nation. Ford pickups’ theft rate of 5.9 per 1,000 vehicles is over twice as high as any of those three models.

← The Most Dangerous States for Driving (2021)
Driving Dangerously: Car Brands With the Most DUIs →