Insights>Generations With The Best And Worst Drivers

Every generation is associated with a slew of stereotypes, whether accurate or not. But when it comes to driving, how does each generation measure up? 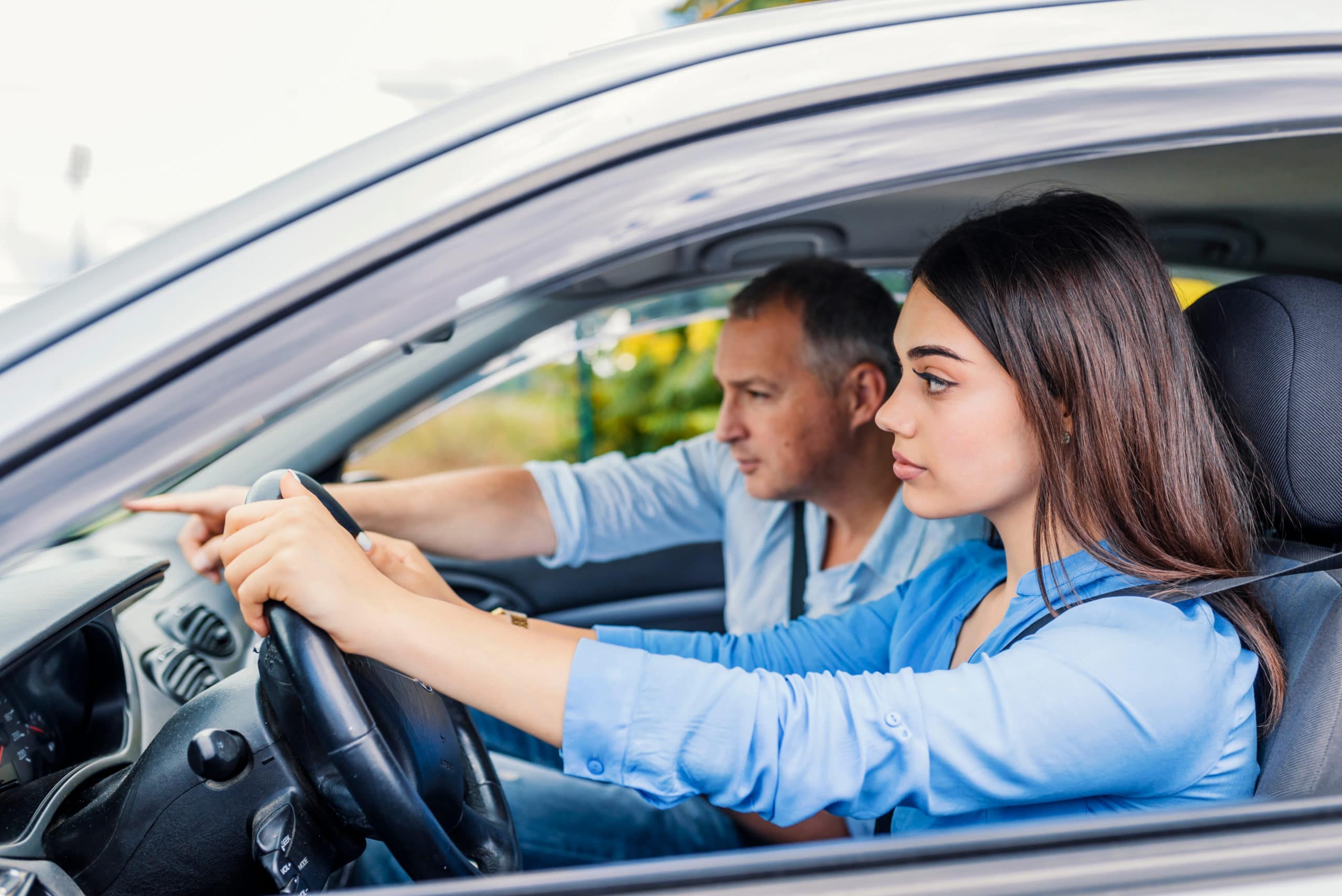 The vast majority of drivers on the road today consist of four different generations: Boomers, Gen X, Millennials, and Gen Z. Quite a litany of age-based tropes and stereotypes have made their way into popular culture, including beliefs based on how each generation drives. While older drivers view younger ones as aggressive and imprudent, older drivers tend to be considered too slow, too cautious, and inattentive. Many buy into these driving-related generalizations, but how true are they really?

Curious to uncover whether the seemingly age-old adage that both the youngest and most elderly drivers are always the worst, Insurify’s data scientists turned to their database and ranked each generation based on their driving behavior.

The data scientists at Insurify, a website used to compare auto insurance rates, referred to their database of over 2 million insurance applications to determine which generation has the worst drivers.

When applying for insurance, drivers disclose information such as their age and driving history, including past accidents and driving infractions. For each cohort, Insurify’s data scientists calculated the proportion of drivers with a moving violation and at-fault accident on their record. The group with the highest percentage of drivers with an infraction on their record was awarded the dubious distinction of the generation with the worst drivers. 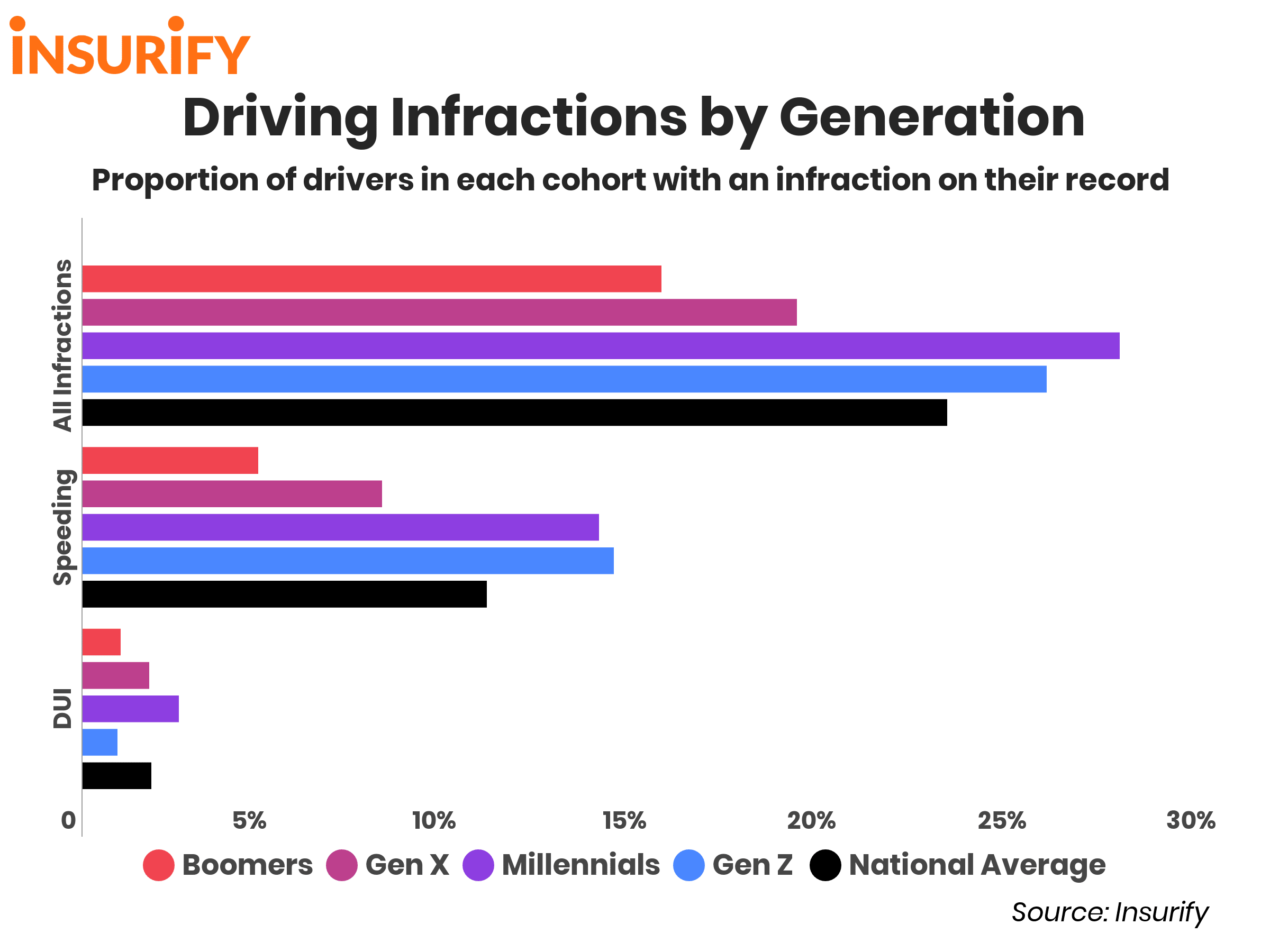 Who are the worst drivers?

The Generations ranked from the Best Drivers to the Worst Drivers

Insurify’s analysis reveals Boomers as the best drivers in America. Younger generations might disparage Boomers for their alleged lack of know-how when it comes to technology, politics, and current events (whether warranted or not), but there’s no question that these drivers come out on top when it comes to safe driving. Most notably, Boomers tend to be significantly more prudent on the roads than their younger counterparts: the proportion of speeding tickets among Boomers is less than half the national average. In fact, Millennial- and Gen Z drivers are three times more likely to have a speeding ticket on their records than Boomers.

Finding insurance as an Uber or Lyft driver can be daunting. Luckily, we’ve got you covered: read all about the best companies for Uber insurance.

Gen Z drivers, despite being the youngest on the roads, do not have the worst driving behavior in America. According to the data, America’s youngest drivers perform better than Millennials across nearly all categories. Overall, Gen Z drivers have nine-tenths of the infractions and at-fault accidents that Millennials do. It’s also practically 3 times less common for Gen Z drivers to drive drunk than Millennials. In fact, it may be shocking to learn that Gen Z drivers seem to be the most prudent when it comes to drunk driving: these young drivers have the lowest drunk driving rates of all generations.

Dissatisfied with your policy, or curious how much you can save? Check out Insurify’s one-stop guide to finding the right car insurance quotes for you.

You’re probably paying too much for insurance… Find out how you can find cheap car insurance that meets all your needs.

Don’t let the cost of auto insurance get you down. If you’re a low-income driver, you’ll love our guide to low cost auto insurance.

Millennials are the worst drivers in the United States, according to Insurify’s analysis. Millennials have by far the highest rates of infractions and at-fault accidents on their record compared to all other generations. Despite having about the same proportion of speeding tickets as Gen Z drivers, Millennials have by far the highest rates of DUIs out of any other generation. This generation is also the most likely to run a red light, and the most likely to be charged with reckless driving. Specifically, Millennials are more than twice as likely to blow through red lights than Gen X drivers and Boomers and are 15 percent more likely than Gen Z drivers. They have nearly five times as many reckless driving convictions as Boomers, and two and a half times as many as Gen X drivers. Without question, Millennials are the most dangerous drivers on the road.

Learn More
Insights>Generations With The Best And Worst Drivers