For anyone wondering if their town’s drivers are actually the worst, this is the definitive list of cities with the most traffic violations in 2022. 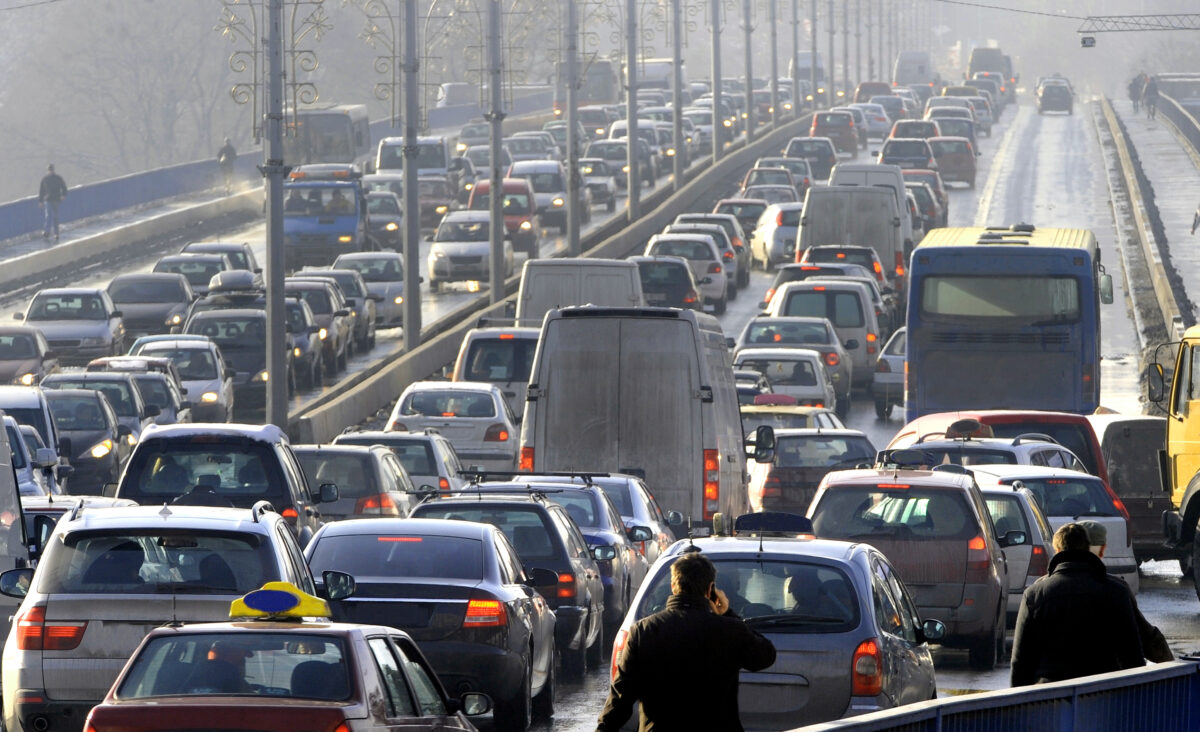 Plenty of Americans like to complain that their city has the worst drivers. In fact, doing so is something of a national pastime. After all, grumbling that no one on the road knows how to drive is a relatively harmless way to blow off steam during stressful daily commutes. Recently, drivers have had even more to complain about, as rates of dangerous driving behavior, including speeding, are on the rise across America. Many motorists picked up bad driving habits during the COVID-19 pandemic’s initial shelter-in-place orders, and unfortunately,  have continued those dangerous practices  into 2022.

While not all moving violations are equally hazardous, every infraction — from improper backing to reckless driving — represents some level of neglect for the rules of the road. Curious to see where drivers break traffic laws most often, the data scientists at Insurify turned to their database of over 4.6 million car insurance applications to identify the city in each state with the worst drivers in 2022. 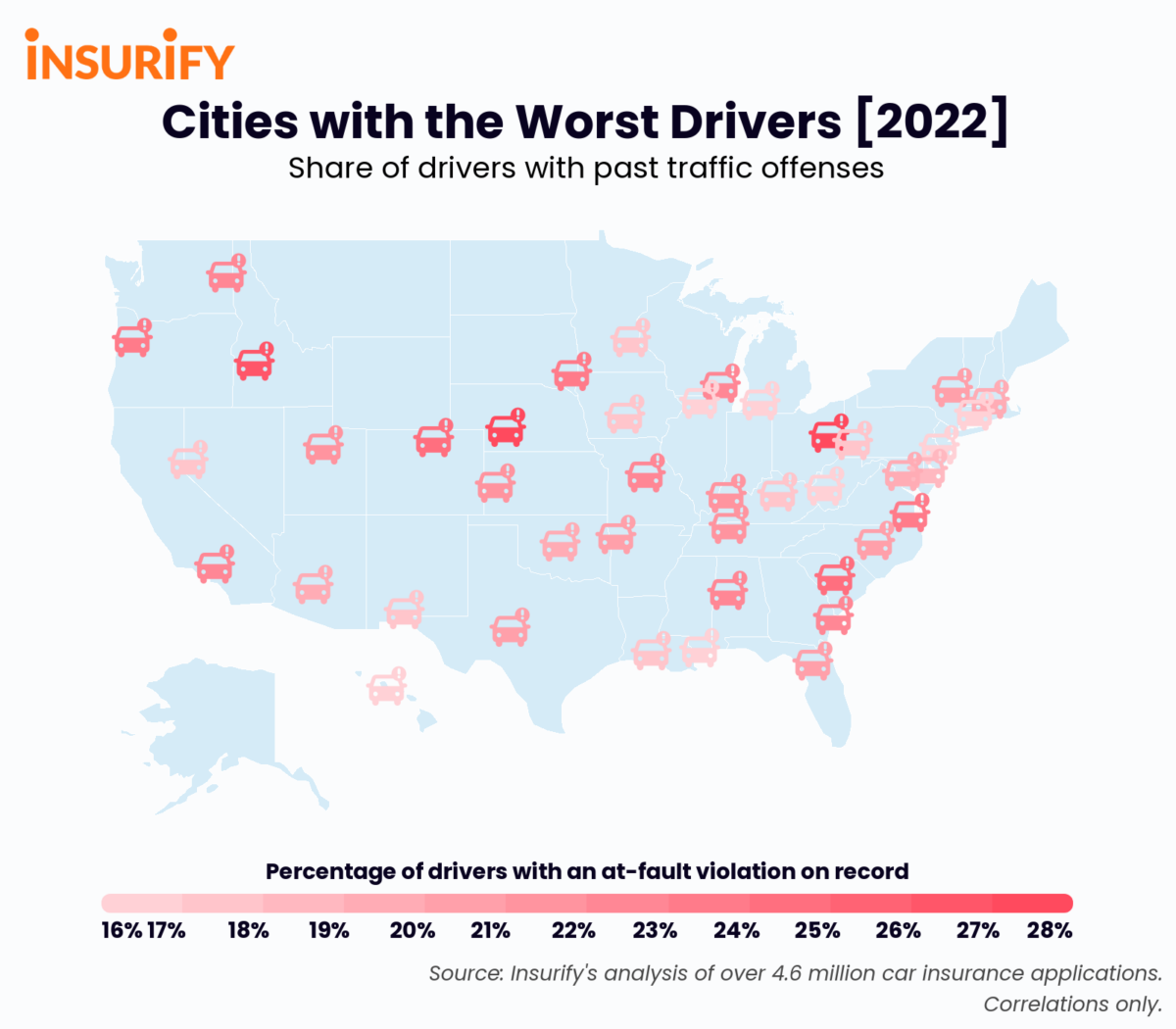 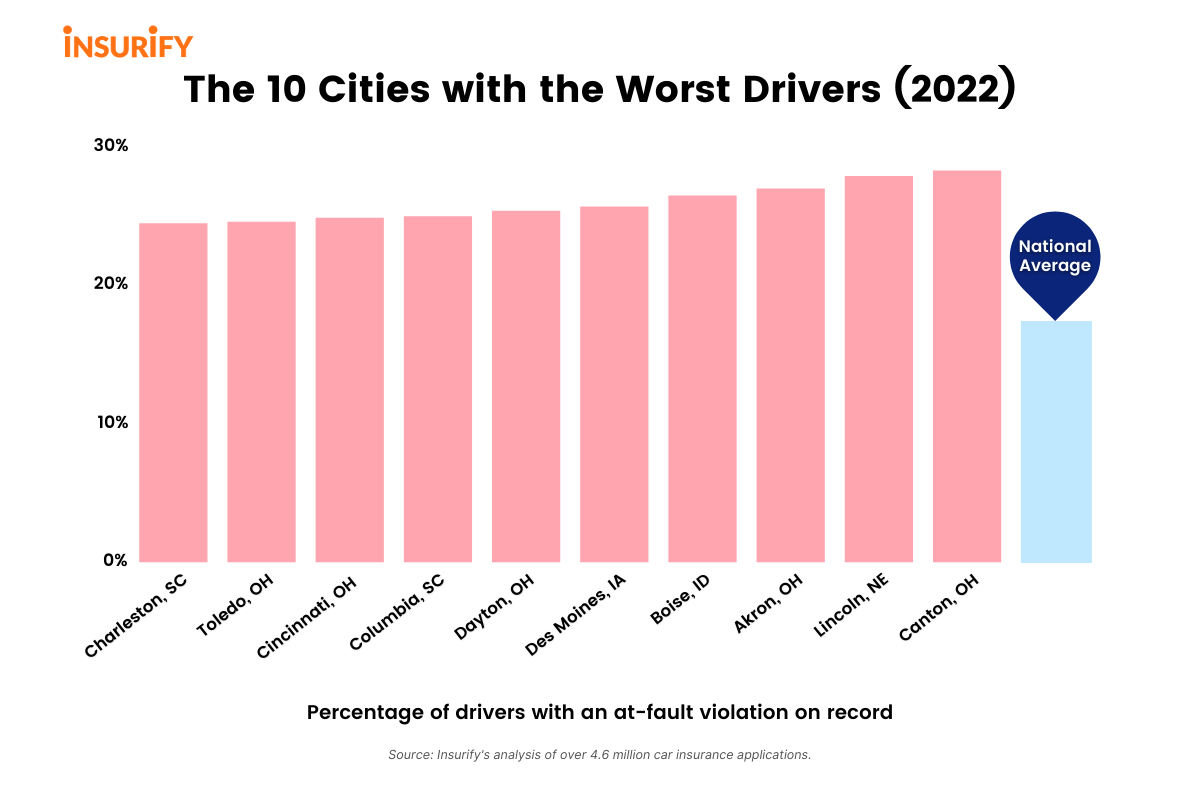 Researchers at Insurify, a site to compare auto insurance rates, turned to their database of over 4.6 million car insurance applications to identify the U.S. cities with the worst drivers in 2022. For every metropolitan area with at least 50,000 residents — the U.S. Census Bureau’s definition of an urban area — Insurify’s data scientists compared the number of drivers with a prior at-fault moving violation on record within the last seven years against the overall driving population. The city in each state with the largest share of drivers with an at-fault violation on record was deemed the worst driving city in its respective state in 2022. For states with data on fewer than two cities with a population greater than 50,000, the two largest cities were considered in this analysis. Due to insufficient metropolitan area data, Alaska, Maine, Montana, New Hampshire, North Dakota, Rhode Island, Vermont, and Wyoming were excluded from this analysis.

Population data for each metro area was gathered from the United States Census Bureau.

What city has the worst drivers in America?

Canton, OH, has the worst drivers in America in 2022. 28.2% of Canton drivers have a prior at-fault traffic infraction on record, a share that's a whopping 64% higher than the national average.

City in Each State With the Worst Drivers (2022)

The word is out: Insurify is the best car insurance quotes comparison site in town. Find the perfect policy today!

Insurify is the one-stop destination for cheap auto insurance in California. Golden State drivers can find the best policies, plus answers to all their coverage-related questions and more, from Insurify’s experts.

Texans are no strangers to shopping around. Lone Star drivers can secure the best car insurance quotes in Texas when they use Insurify to compare quotes. Yee-haw!

Looking for cheap car insurance in South Carolina, but don’t know where to turn? Head over to Insurify’s easy-to-use website and save big when you compare car insurance quotes from multiple providers, all in real time.