Both home values and rental costs have risen dramatically across the U.S. over the past year, but they haven’t increased uniformly. These are the 10 metro areas where renting is most affordable compared to home buying, and vice versa. 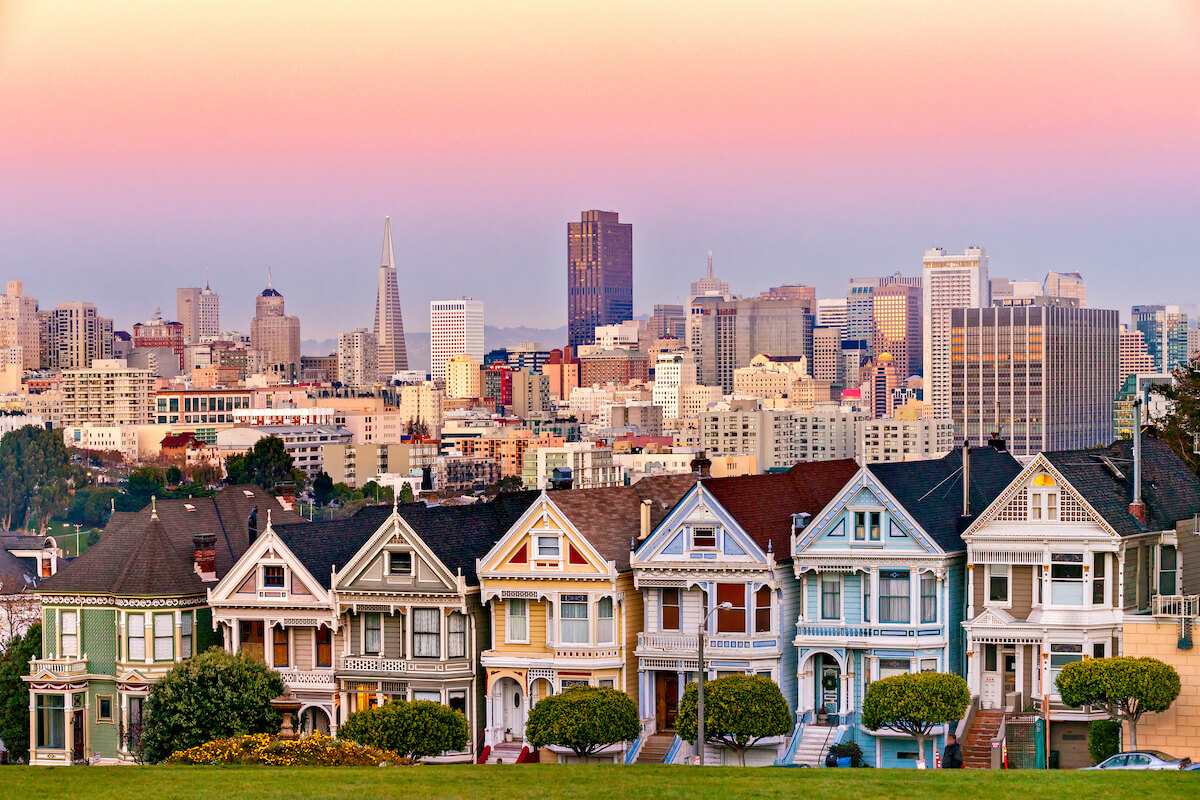 It’s no secret that the U.S. housing market has been on fire for the past couple of years. The average home price jumped a record 18.8% year in 2021,[1] and many experts are even comparing today’s conditions to the real estate bubble of 2007.[2]

Meanwhile, rent prices are also hitting all-time highs, though there are signs that both markets could slow their growth as rents fully recover from early COVID-19 pandemic lows and the Federal Reserve starts to aggressively raise mortgage rates.[3]

The home buying and rental markets are both trending upward, but they are not necessarily following the same pace within a given city. Just because a city has soaring home prices, for example, doesn’t necessarily mean that the area’s rents are similarly sky-high. This means that residents in some metropolitan areas can find better financial value in the rental market, whereas residents in other cities might save money by purchasing a home.

Curious to see where renting offers the greatest financial advantage over homeowning — and vice versa — the data scientists at Insurify analyzed housing data from Zillow and rental data from Apartment List to determine the 10 best cities where renting is comparatively better than buying and where buying is comparatively better than renting in 2022. 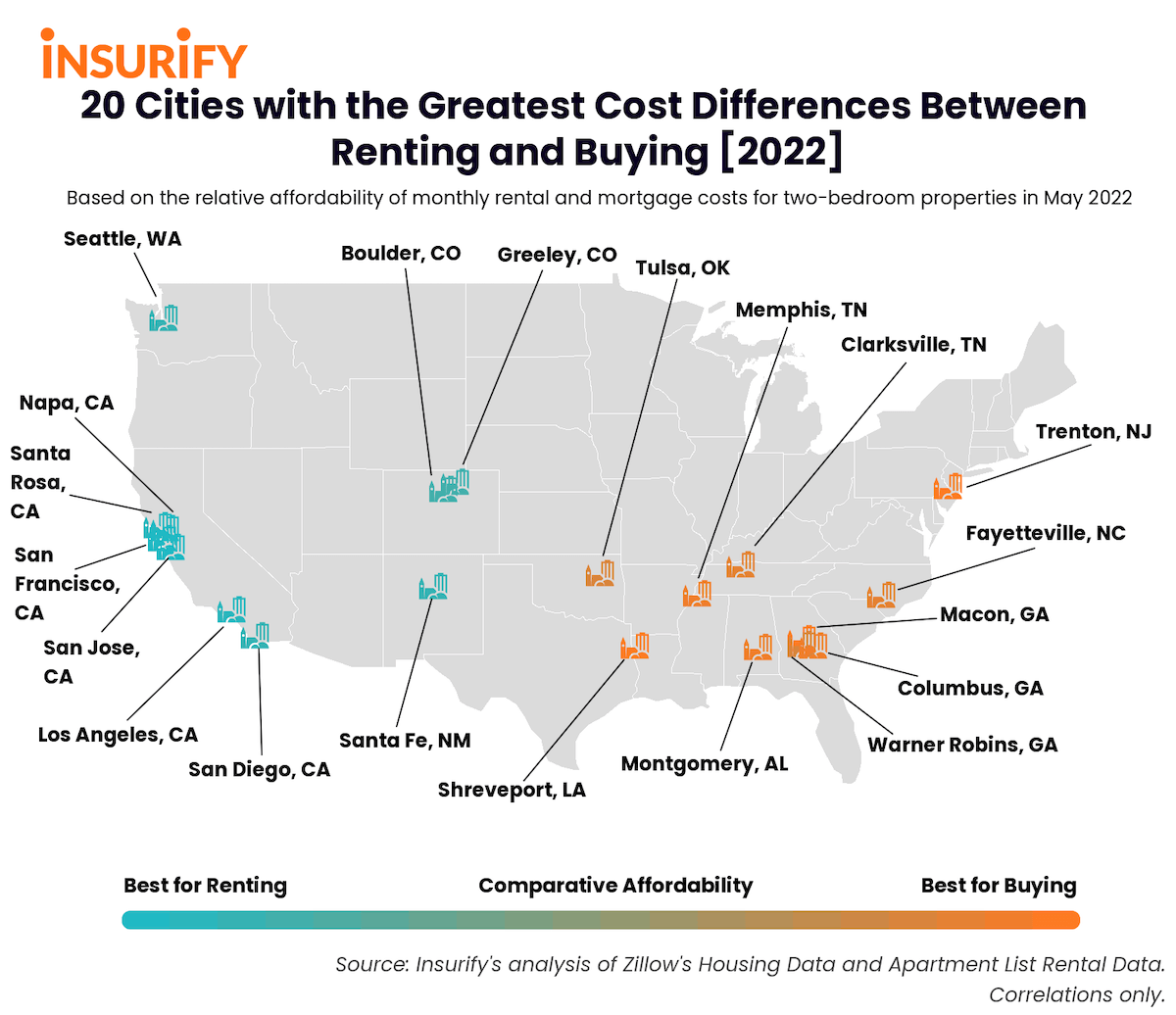 The data scientists at Insurify, a site to compare home insurance quotes, referred to Zillow’s housing data and Apartment List rental data to identify the metropolitan areas comparatively best for renting and owning in 2022. Each city’s home values were determined using Zillow’s Home Value Index (ZHVI), which reflects the typical value for homes in the 35th to 65th percentile range in a given metropolitan area.[4] Monthly rent prices were drawn from Apartment List’s Rent Estimates, which estimate the median rent paid for new leases in a given metropolitan area.[5] Researchers narrowed this analysis to only two-bedroom homes and rental units to account for variance in the overall housing stock across different cities.

To estimate monthly mortgage payments from home values, the data science team assumed a fixed 5.25% interest rate, typical for May 2022, with a 30-year borrowing period. Due to variability in property taxes and homeowners association fees within and across housing markets throughout the country, this analysis compared only mortgage payments (the large majority of a home’s monthly costs) when assessing relative home owning affordability.

This analysis considered every U.S. metropolitan area with a population of at least 100,000 residents according to the 2020 U.S. Census.

The Best Cities for Renting or Buying a Home (2022)

The top 10 U.S. cities where renting holds the greatest financial advantage over homeowning are all located out West, especially in California. Overall, renting is the better value in these metropolitan areas not because it’s particularly affordable — in fact, monthly rent for a two-bedroom apartment is 52% higher than the national average across these 10 cities — but because home prices are even more expensive in comparison.

No metro area exemplifies this trend better than San Francisco, where renting holds the greatest financial advantage over owning a home. The area’s typical two-bedroom unit costs 69% more to rent than the U.S. average, but the median value of a two-bedroom home is a whopping 345% more expensive than the national median. Even before factoring in property taxes, insurance costs, and HOA fees, this means that Bay Area homeowners are paying 2.3 times more per month for a two-bedroom home than their renting counterparts, assuming a mortgage rate in line with May 2022 averages.

In contrast to many cities out West,residents can find much better financial value in homeownership in smaller Southern U.S. cities as opposed to renting. While rents in these metropolitan areas are often cheaper than the national average, home values are comparatively much more affordable. In more than half of these 10 cities, residents can end up paying less than $500 per month toward their mortgages on a typical two-bedroom home, assuming an average May 2022 mortgage rate.

The only city among the top 10 with a different story is Trenton, NJ, where monthly rents for two-bedroom units are 56% higher than the national median, likely because of the area’s proximity to New York City. Home prices in the metro area, however, are right in line with the typical value of a two-bedroom house in America, meaning that Trenton residents may find that owning a home is reasonably cheaper than renting.