Click here to see the Worst Cities for Commuters report for 2022.

Working from home will no longer be the norm for many Americans in 2021, and drivers in these cities are bracing themselves for the return of the dreaded commute.

With most U.S. cities fully reopening throughout 2021, workplaces across the nation have already begun to bring employees back to work in-person for at least part of the workweek (though the rise of the highly transmissible COVID-19 Delta strain may complicate matters). According to a CNBC survey of top executives in HR, finance, and technology in July of 2021, approximately half of the companies surveyed are planning to employ a hybrid work model during the third and fourth quarters of 2021, and about one-third anticipate being fully in-person.

There are certain intangible benefits to working in person, such as a defined work-life separation, more casual socializing with coworkers, and greater team morale. There are also some drawbacks, namely having to commute. Before the pandemic, the average American spent approximately 45 minutes a day commuting to and from work. And now, with many companies switching employees back to at least partial in-person work, those precious extra minutes of sleep, a new pandemic hobby, or spending time with loved ones at home may instead be claimed by the daily slog to the office.

In general, commuting is not considered a pleasurable activity. Not only that, but in certain cities, traffic patterns, overall congestion levels, and the frequency of driving infractions make the daily commute a particularly less-than-pleasant experience. To see where drivers can expect a more difficult commute, the data science team at Insurify crunched the numbers to identify the worst cities to commute in for every state. 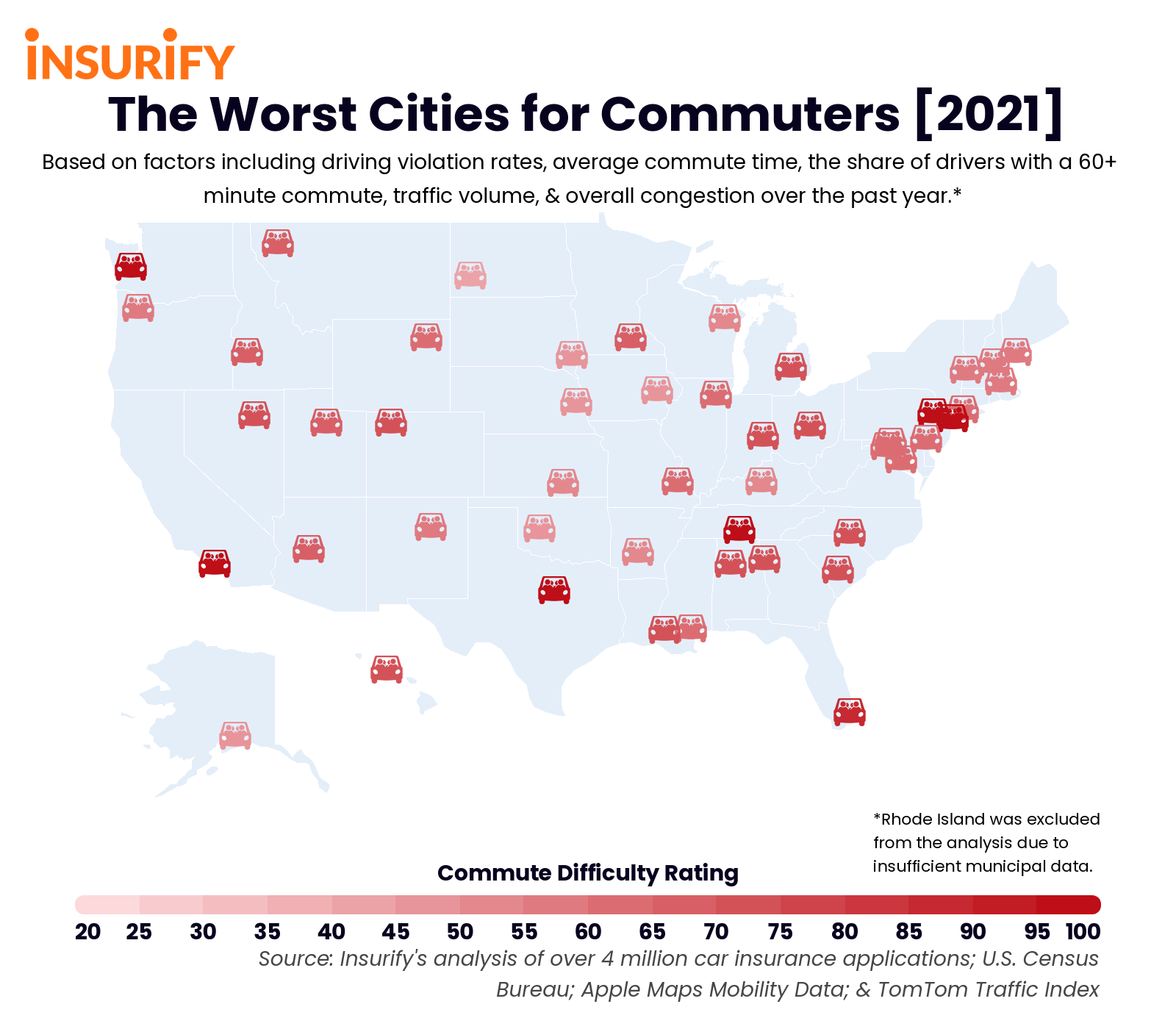 Across the 870 U.S. cities surveyed, the average Commute Difficulty Score was 27 out of 100. Cities were rated using a proprietary scoring algorithm on factors including driving infraction rates, commute time, and change in daily driving levels over the past year. A higher score indicates a higher prevalence of conditions that makes commuting more difficult. 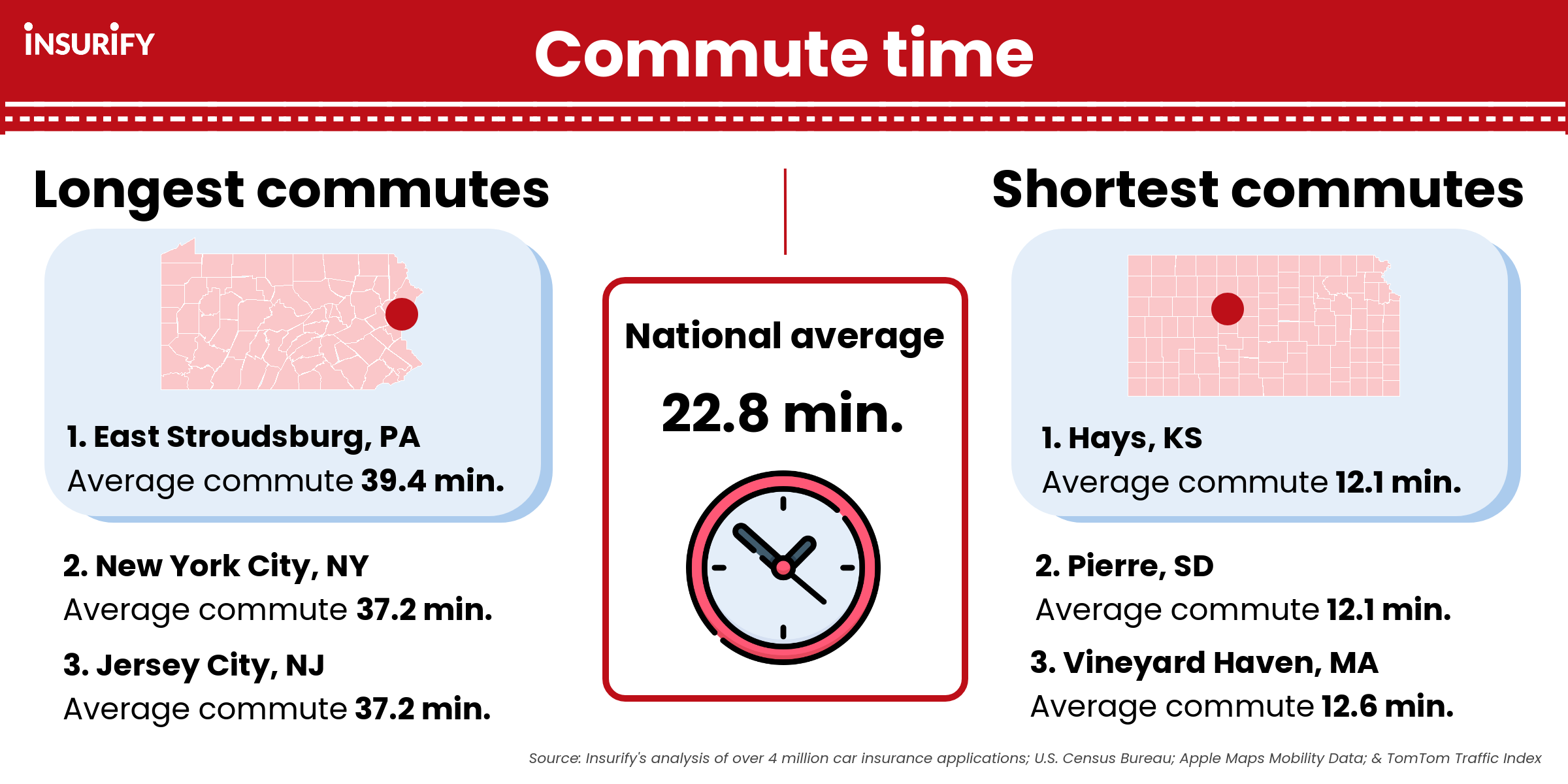 According to the most recent Census Bureau Data, the average commute time in cities across the U.S. is 22.8 minutes. On average, 6.8 percent of commuters in cities have a commute that takes 60 minutes or longer. 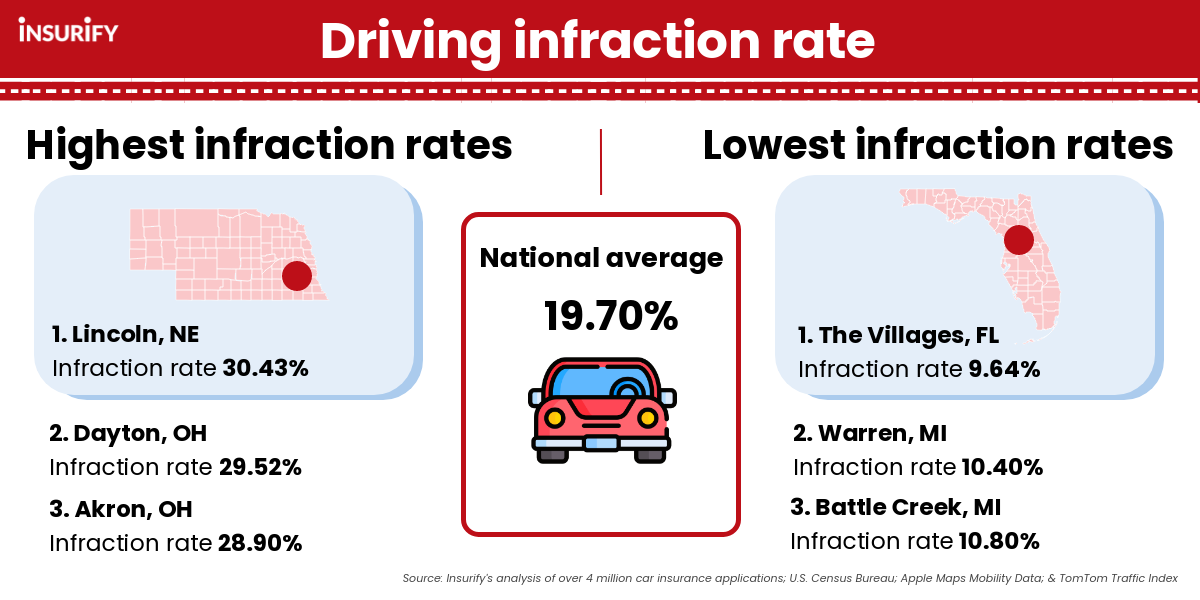 The average city-wide share of drivers with at least one at-fault violation on record is 19.70 percent. Behavior can range from failure to yield violations and speeding to DUIs and hit-and-runs. 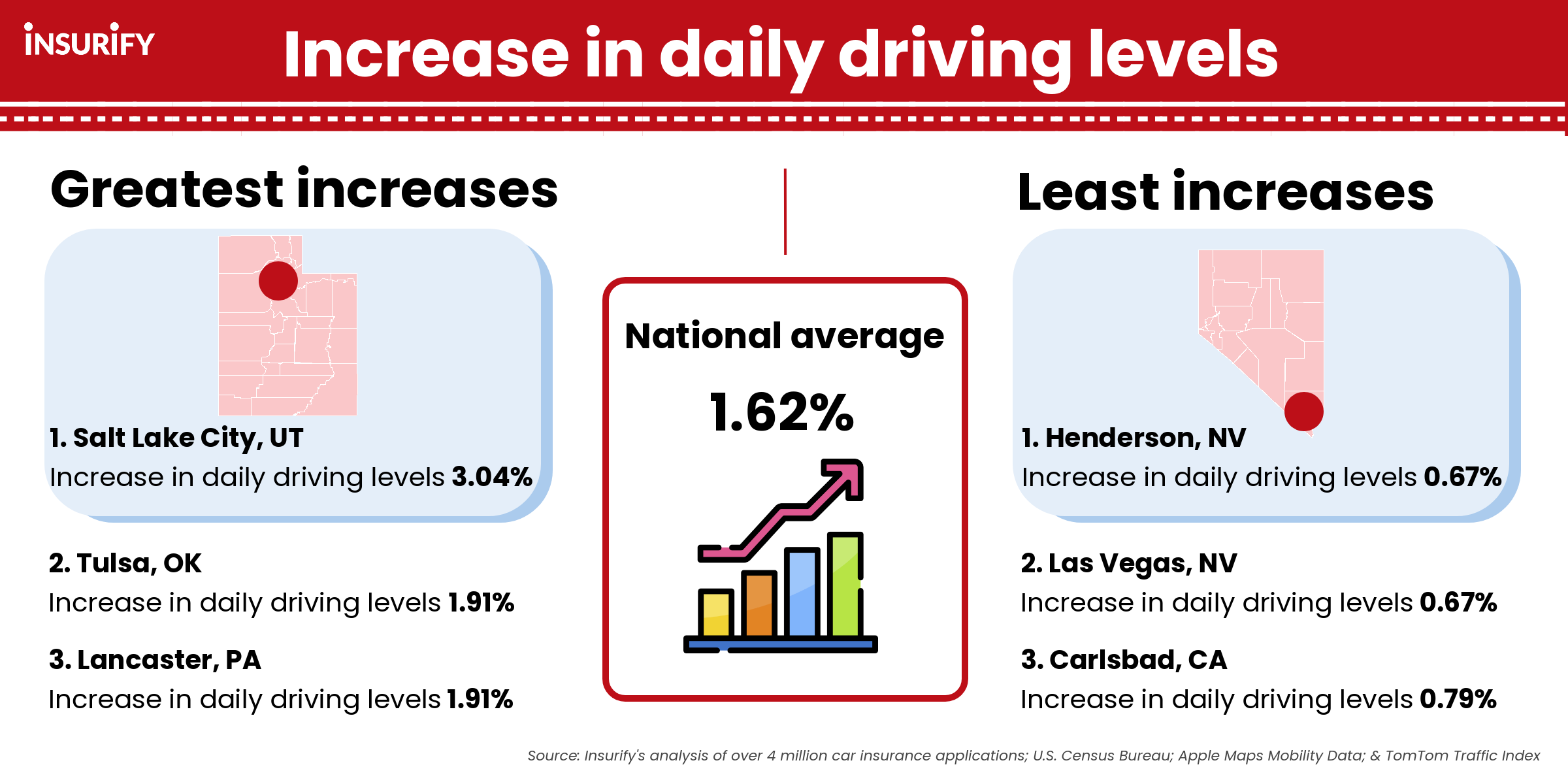 Between January 2020 and July 2021, the average increase in driving levels across American cities was 1.62 percent. This increase suggests that in many regions, despite a drop in overall traffic immediately following lockdown orders in the spring of 2020, driving rates have returned to pre-pandemic levels. In 2020, U.S. cities experienced an average of 91 days with low traffic and an average congestion level of 13.83 percent, meaning that a thirty-minute trip would take 13.83% more time on average than it would during uncongested baseline conditions.

The data scientists at Insurify, a car insurance comparison site, referred to both publicly accessible and proprietary data to identify the city with the worst commute in each state. They ranked cities’ commute difficulty based on a composite score of factors including commute time, driver safety, and traffic congestion levels.

City-level data for average commute time and the share of drivers whose commutes are 60 minutes or longer was derived from the U.S. Census Bureau’s most recent American Community Survey. Longer commute times and greater percentages of drivers with 60+ minute commutes contributed to higher Commute Difficulty Scores for cities.

Insurify’s data science team derived driving infraction rates from its database of over 4 million car insurance applications. When applying for car insurance, drivers disclose their city and state of residence, in addition to any prior violations on their driving record. For each city, Insurify’s data scientists calculated the proportion of drivers with at least one violation on their record. Cities with higher driving infraction rates received higher Commute Difficulty Scores.

To evaluate cities on overall traffic patterns and changes in daily driving levels over the past year, Insurify’s data scientists referred to Apple Maps COVID Mobility Data and the TomTom Traffic Index. Driving levels across U.S. cities were measured by comparing the daily volume of direction requests per city to a baseline volume on January 13, 2020. Data sent from users’ devices to Apple Maps services is anonymized. Congestion levels are from TomTom’s analysis of free-flow travel times from their database of over 600 million global drivers.

Rhode Island was excluded from the analysis due to insufficient municipal data.

The U.S. city with the longest average commute length is East Stroudsburg, PA. Drivers spend an average of 39.4 minutes commuting per day. New York City, NY and Jersey City, NJ also have some of the longest commutes, averaging 37.2 minutes.

The Worst Cities for Commuters, 2021

Finding cheap car insurance South Carolina is easy when you compare quotes in real time. Insurify can help you save money on car insurance ASAP.

Compare cheap car insurance NC with Insurify and find the best rates for your budget in just a few clicks!

Looking for cheap auto insurance Alabama? Insurify’s got drivers down South covered by providing the best quotes in just a few minutes. Compare online today to start spending less on your premium.

Where can I compare the best car insurance quotes Arkansas? Insurify’s got Natural State drivers covered by being the one-stop-shop for cheap auto insurance.

Reviewed by
Andrew Huang
Director of Analytics
Andrew leads data analysis at insurify.com, and he has formerly led data analysis projects at kayak.com and realtor.com. Andrew strives to help people save money on their insurance, and in his free time he loves finding great deals on travel flights. Insurify's network bidding algorithms and Kayak's flight trends are personal favorite projects.
Read more from Andrew Huang
Insights>Worst Cities For Commuters 2021