Apple and Tesla may be making headlines for their advancements in electric vehicle development, but these five hybrid and electric car models from traditional automakers deserve recognition for their drivers’ superb eco- and safety-consciousness. 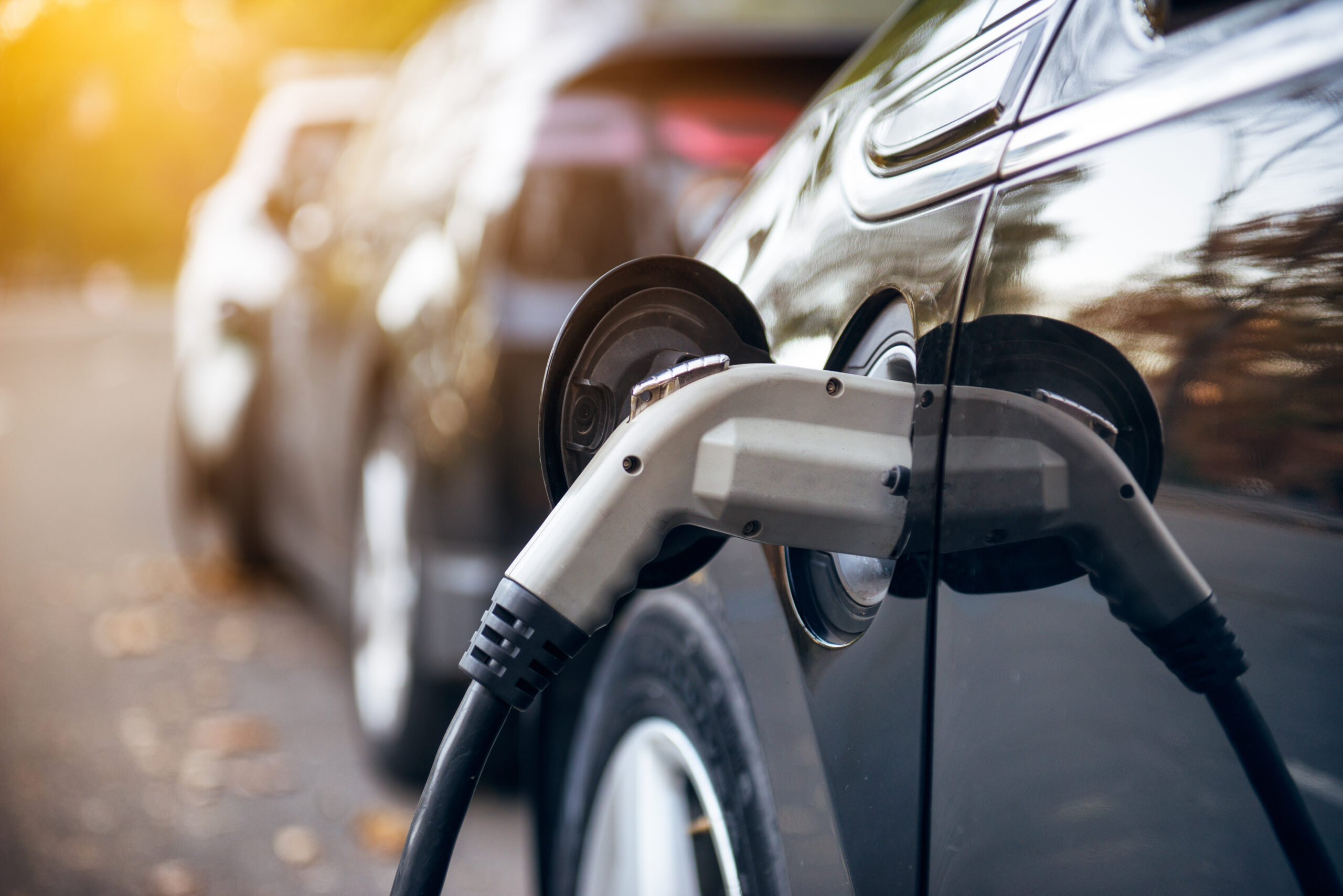 When it comes to the future of automobiles, electric cars are at the forefront of the conversation. Advancements in electric vehicle technology are rapidly changing how we think about the future of car ownership, with new companies emerging onto the auto landscape, such as Apple (in December of 2020, Apple announced that its highly-anticipated electric car is set for release in 2024). ‘Green’ vehicle technology is impressive not only for its sheer innovative implications, but also for its encouragement of a more sustainable, greener future of driving.

Hybrid cars and electric vehicles are more fuel-efficient and therefore less polluting; carbon emissions per mile driven are usually much lower than those of non-hybrid or electric vehicles. Their drivers typically prioritize reducing their carbon emissions, with the added benefit of saving money on gas. Likewise, certain hybrid and EV drivers prioritize their safety and others’ by heeding traffic laws more often than most. To see which EVs have the best drivers, the research team at Insurify crunched the numbers to identify the five hybrid and electric car models with the highest rates of clean driving records. 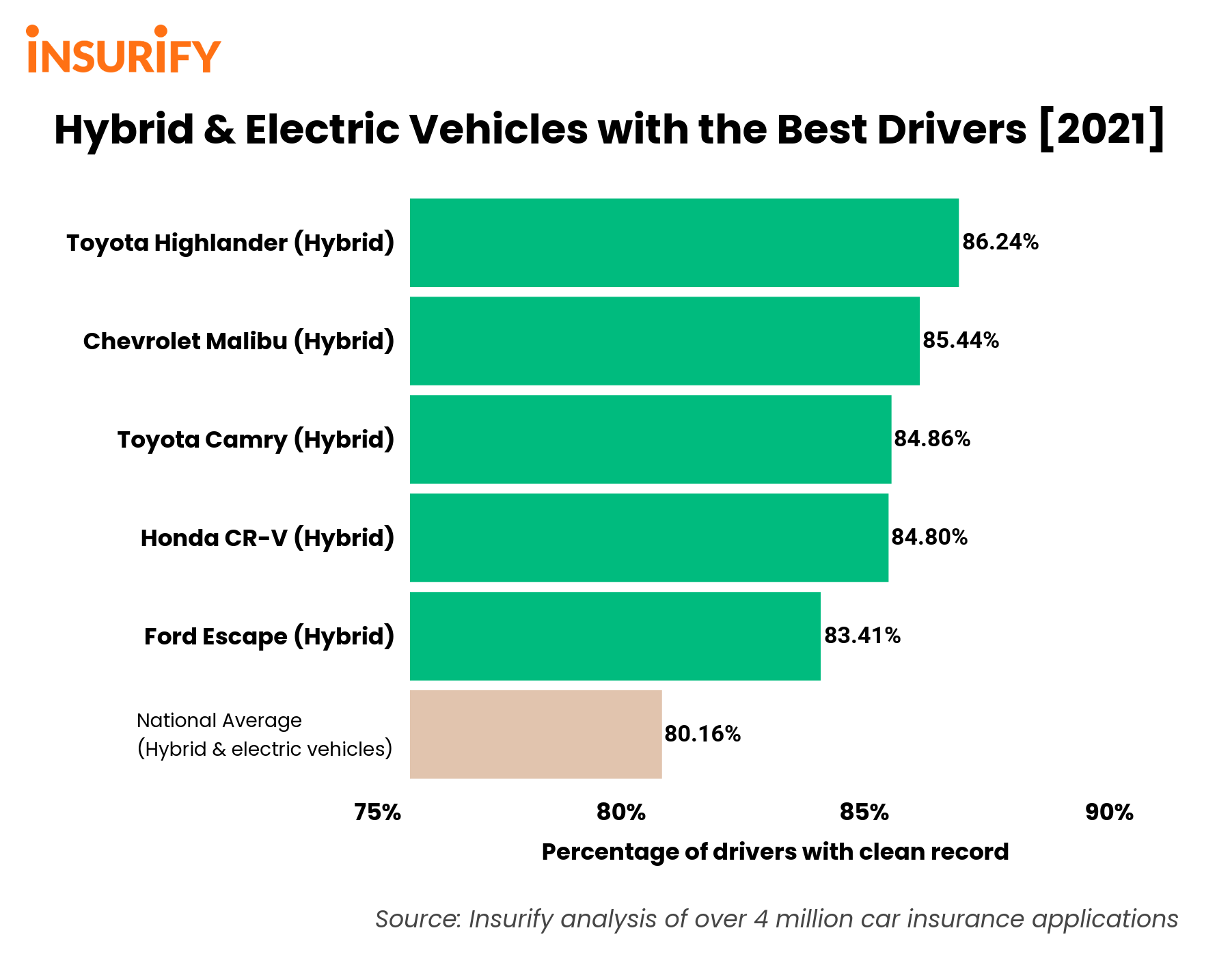 The data scientists at Insurify, a site to compare auto insurance rates , referred to their database of over 4 million car insurance applications to identify the EV models with the best drivers. When applying for car insurance, applicants disclose their vehicle’s make, model, and fuel type, in addition to any prior violations on their driving record. Insurify’s data scientists compared the number of drivers with at least one violation on their record, from speeding and failure to yield incidents, to street racing and DUIs, to the total number of drivers for each electric and electric/hybrid car models in the database. The five models with the lowest infraction rates, or the highest proportion of clean driving records, were selected as being the EV models with the best drivers.

Vehicle base price and mileage estimates were derived from the manufacturer’s website. The listed body type reflects the hybrid models of that particular vehicle’s most recent generation.

What are the best EV cars?

With an infraction rate that’s 17 percent lower than the national average, Ford Escape Hybrid drivers are the fifth-best behaved EV drivers in the nation. Not only does the Escape have drivers that are exceptionally adept at rule-following on the roads, but it’s also one of the more affordable hybrid vehicles on the market. Impressively, the Ford Escape sells for a comparable price to similar non-hybrid vehicles. This compact SUV attracts drivers that are both courteous and eco-conscious.

The best insurance comparison sites in 2021, according to our team of experts.

Which insurance providers offer no down payment car insurance? If you’re looking for a low-cost premium with no deposit, here’s where you should go.

Yes, it is possible to get car insurance without a license. Let Insurify’s experts point you to the best options for unlicensed drivers.

Drivers of the hybrid Honda CR-V have the fourth-highest rate of clean driving records among hybrid and electric car drivers nationwide. Honda CR-V Hybrid drivers are cited for driving infractions 24 percent less often than the average driver. This crossover SUV is also one of the IIHS’s 2021 Top Safety Picks, making the CR-V Hybrid not only an environmentally conscious pick, but a practical choice at an affordable price point. With standard features including safety and driver-assistive technologies, Apple CarPlay integration, and all-wheel drive, the CR-V hybrid driving experience is nothing short of excellent, as is its drivers’ behavior on the roads.

Ranking third is the Toyota Camry, whose drivers are cited for illegal driving infractions 24 percent less often than the typical driver. The Camry hybrid has no shortage of recognition across measures of safety, affordability, and durability: not only is it an IIHS 2021 Top Safety Pick like the Honda CR-V, but the Camry hybrid also nabbed a spot on U.S. News & World Report’s Best Cars for the Money rankings in 2020 and earned five stars for safety in 2020 from the U.S. Department of Transportation. The driving range on the Toyota Camry hybrid is one of the best on the market, averaging an EPA-estimated 816 city miles and 848 highway miles per tank.

Drivers with more than a few violations on their record are evaluated differently when buying car insurance than those with none. Luckily, Insurify’s experts wrote the guide to shopping for high risk auto insurance.

Bundle up! Buying auto and renters insurance from the same carrier can help you save on your premium costs.

You can pay less for your premiums when you shop for home and auto insurance quotes from the same carrier. Find out more about bundling your auto and home insurance today.

Chevy Malibu hybrid drivers have a traffic citation rate 27 percent lower than the national average, landing them in second place among all  ‘green’ vehicle drivers. The Malibu is a popular sedan nationwide, and its hybrid model is regarded highly by industry experts and consumers alike. In fact, the Chevy Malibu came in third in U.S. News & World Report’s best hybrid & electric car rankings in 2019 for its fuel efficiency, roomy interior, user-friendly interior tech, and overall practicality.

The Toyota Highlander is the best-behaved hybrid vehicle on the roads in America. Highlander drivers are cited for violating traffic laws 31 percent less frequently than the average driver. An IIHS 2021 Top Safety Pick and a top-ranked hybrid by U.S. News & World Report, the Highlander attracts some of the best drivers. This midsize SUV is highly regarded on many fronts, making it a top-notch model for the environmentally and safety-conscious driver.