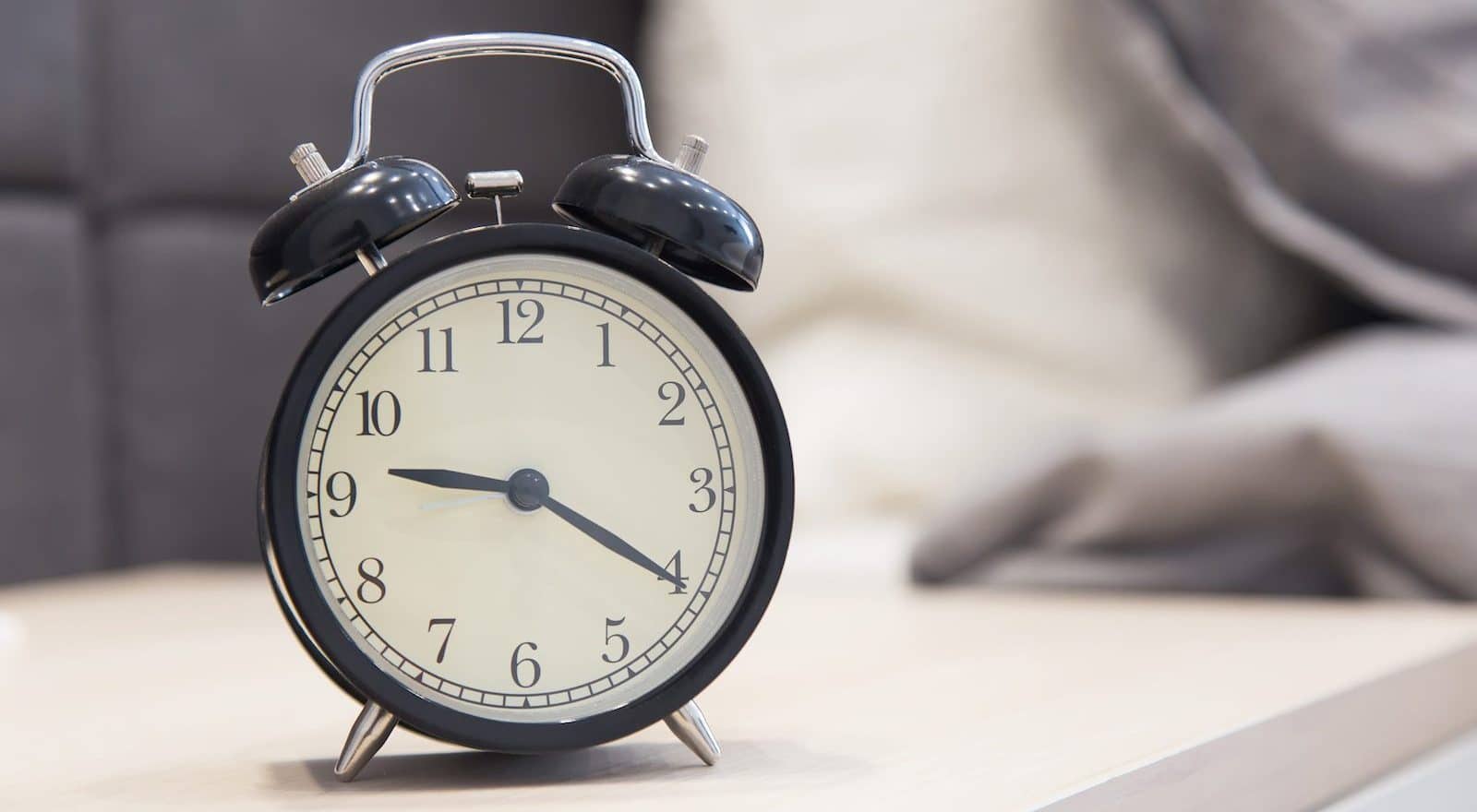 For decades, we’ve been hearing about the science of sleep and the myriad health effects of a full night’s slumber.

According to updated data from the National Sleep Foundation (NSF), adults aged 26 to 64 should receive 7-9 hours of sleep per night. And Arianna Huffington, the queen of sleep herself, has devoted an entire book and compilation of media resources to extolling the virtues of rest.

But while Huffington is popularizing her #SleepRevolution, startup bros, social media influencers, and Wall Street hustlers alike spout platitudes about avoiding sleep altogether and living for “the grind”—we’re told to sleep when we’re dead if we want to enjoy any measure of success.

So, who’s getting a recommended amount of shut-eye? Who’s going for the bare minimum? Who’s hitting the snooze button and sleeping in? Curious about how sleep deprivation—or abundance—could map onto nationwide demographics, the data scientists at Insurify decided to get in bed with the data and discover how sleep duration correlates with personal identity.

Find the best sites to compare car insurance and kickstart your savings journey.

You may qualify for car insurance discounts that you had no idea existed – click here to see if you do.

Compare homeowners insurance quotes at your fingertips – compare, discover, and save with these free comparison sites.

The data scientists at Insurify, a website that lets users compare auto insurance rates in real time, collected information from their database of over 1.6 million car insurance applications, which ask questions about users’ past seven years of driving history, vehicle type, and other relevant information. A random sample of shoppers was also surveyed about their sleep habits—specifically, how many hours of sleep they typically get per night: 5 or fewer, 6, 7, 8, or 9 or more. From the response data, Insurify’s data team was able to determine the significant differences between categories of respondents. 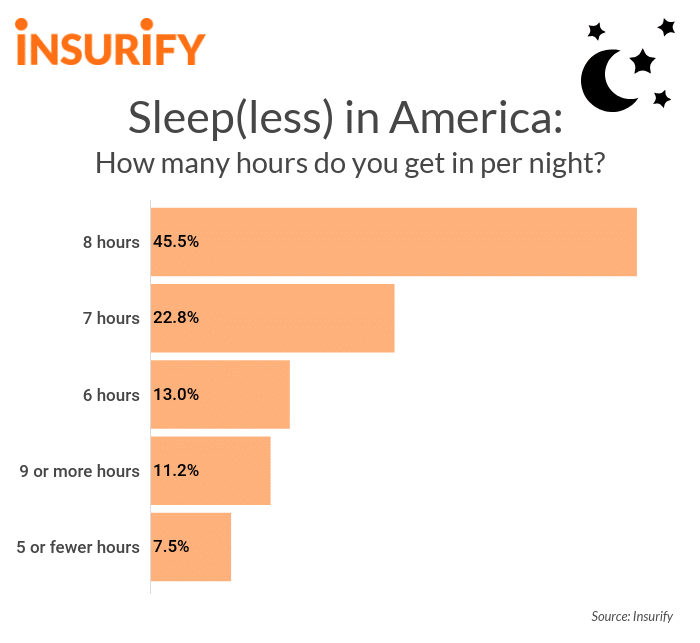 Overall, the results indicated that a plurality of respondents reported getting a standard amount of sleep (eight hours, widely accepted as the sweet spot for grown adults).

Let Insurify’s car insurance calculator get you a quick, no-hassle rate in seconds.

Low cost auto insurance rates are available today – how much could you be saving?

Does your state offer GEICO SR-22 quotes? Click here to find out.

There was a major gender disparity when it came to respondents at both extremes. Perhaps the most compelling insight from the survey results was that an overwhelming percentage of respondents only getting 5 or fewer hours of sleep per night identified as female. That means that the “sleep divide” is largely a gendered divide. 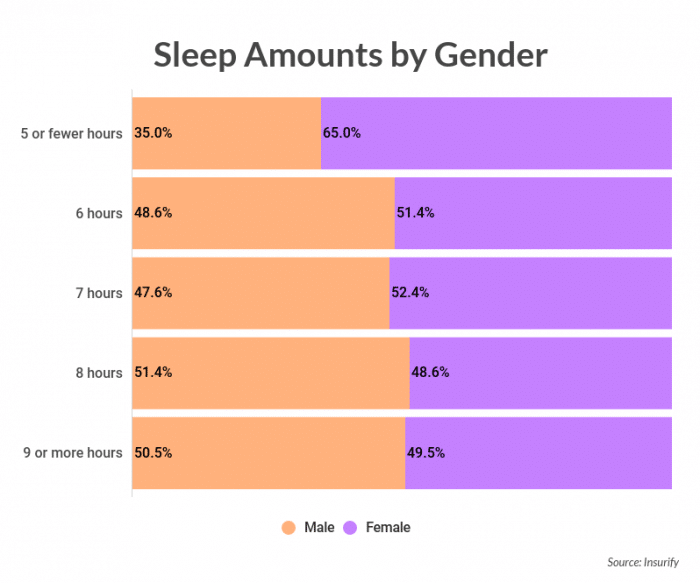 Respondents who reported sleeping five or fewer hours a night were 30 percent more likely to be female than respondents reporting any other sleep amount (the gender breakdown for respondents sleeping six or more hours was exactly 50-50). That’s a statistically significant imbalance between the sexes.

While pulling an all-nighter won’t do wonders for your sleep cycle—a fact current students know all too well—the data suggests that the more degrees you get, the more nightly sleep you might enjoy. 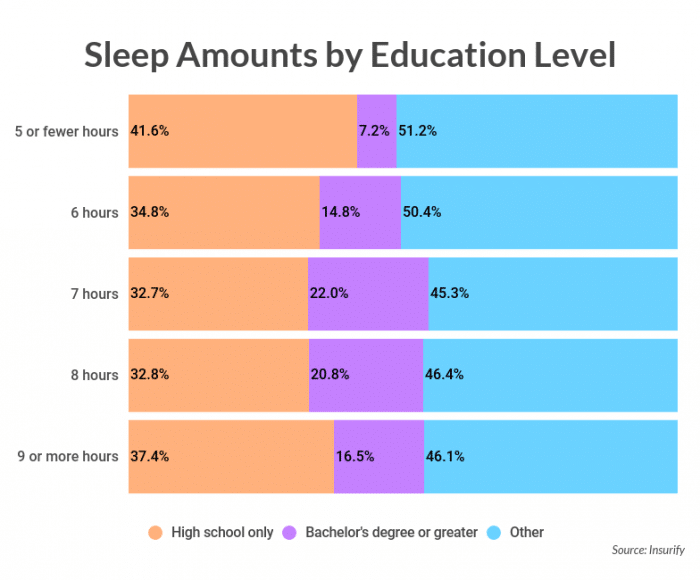 Over 41 percent of respondents only sleeping five or fewer hours a night just had a high school diploma or equivalent. Among respondents getting in six or more hours, just over a third had the same education level.

Those with a Bachelor’s degree or higher were 2.8 times as likely to sleep over 5 hours a night than the remainder of respondents.

These stats imply a positive correlation between advanced educational attainment and proper sleeping habits. Do the highly educated simply have more time and more luxury to get extra hours of nightly rest?

Not to make a blanket statement, but the numbers also indicated that currently employed respondents did not necessarily have the freedom to sleep in. 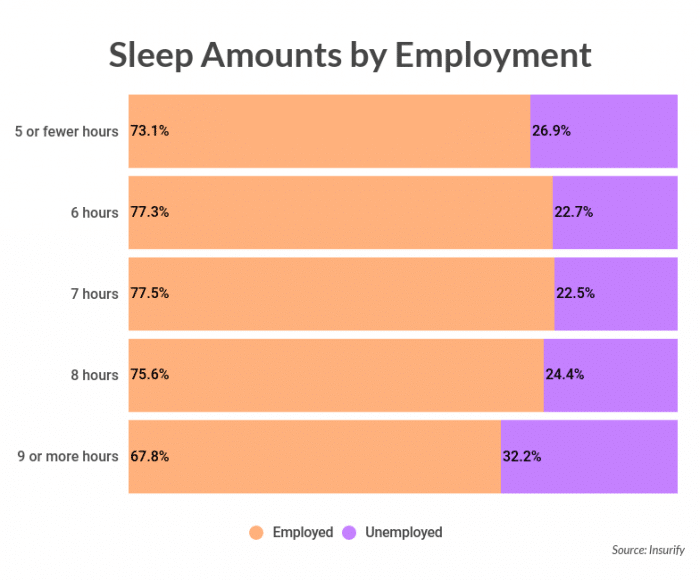 Those enjoying nine or more hours of sleep each night were, by a statistically significant margin, more likely to be unemployed than those reporting any other number. This gap could be explained by the 9-to-5 workday, which, while no longer in vogue amidst the rise of the gig economy, still eats up much of workers’ waking hours and largely structures our social lives.

Who’s been hitting the hay more—those who’ve wed or those who are still unhitched? 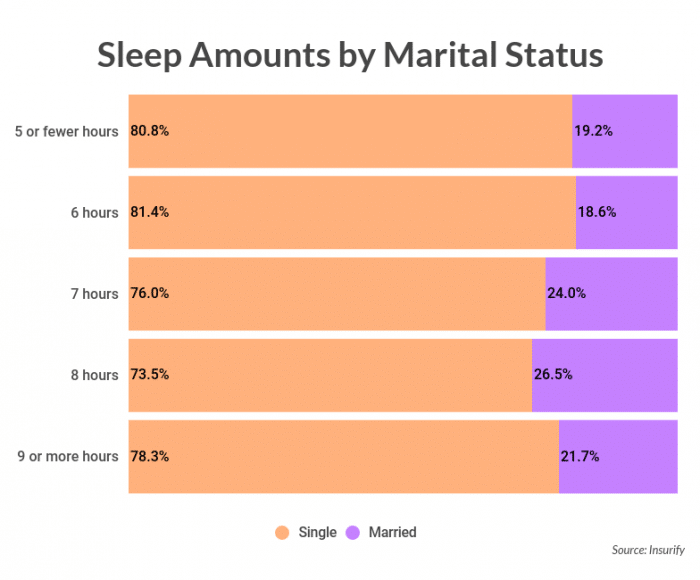 In terms of speeding violations, accidents, DUI, and license suspensions, Insurify’s data scientists found that incidence rates did not significantly correlate with any category of respondent—sleep-deprived or otherwise. Perhaps sleep amounts don’t necessarily determine our driving behavior, but as we’ve seen, they might reveal deeper structural truths about who we are.

Those at the polar ends of the sleep spectrum gleaned the most fascinating insights. As we’ve seen, “extreme sleepers” getting more or less than the recommended amount for grown adults can more or less fall along lines of educational attainment, employment, and even gender. Furthermore, respondents at both ends of this spectrum had some demographic similarities: statistically, when compared to all other respondents, they were both more likely to be unemployed than not.