Drivers across the country have demonstrated elevated rates of aggressive driving since the start of the pandemic. This year, these are the cities in every state where drivers are especially heated behind the wheel. 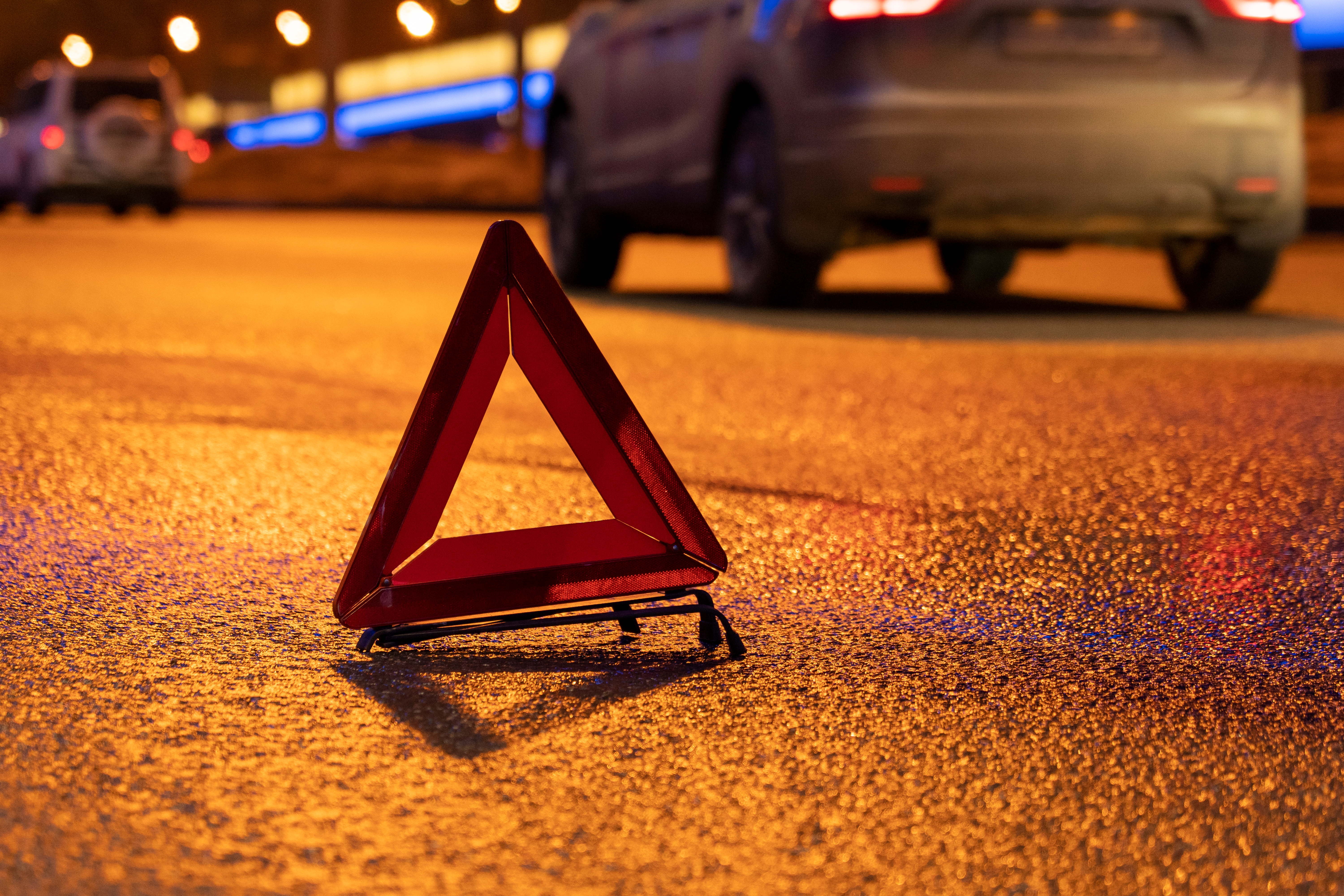 Aggressive drivers come in all forms. Whether it’s abruptly cutting off other vehicles, following too closely behind the car in front of them, or turning a blind eye to traffic signals, there’s no shortage of ways aggressive drivers can irritate — and endanger — their fellow motorists.

In recent years, aggressive driving has unfortunately become more normalized on U.S. roads. According to a recent report by Insurify, 44% of drivers reported witnessing more aggressive driving in the past year compared to before the pandemic. Even as traffic levels have more or less returned to pre-pandemic rates, the spike in aggressive driving, initially sparked during early shelter-in-place orders in 2020, has not followed suit.

While cities from coast to coast are seeing elevated aggression on their roads, there are certain regions where drivers are particularly flagrant behind the wheel. To understand where this trend towards aggression is most prevalent, the research team at Insurify turned to their database of over 4.6 million car insurance applications to identify the city in each state with the most aggressive drivers this year. 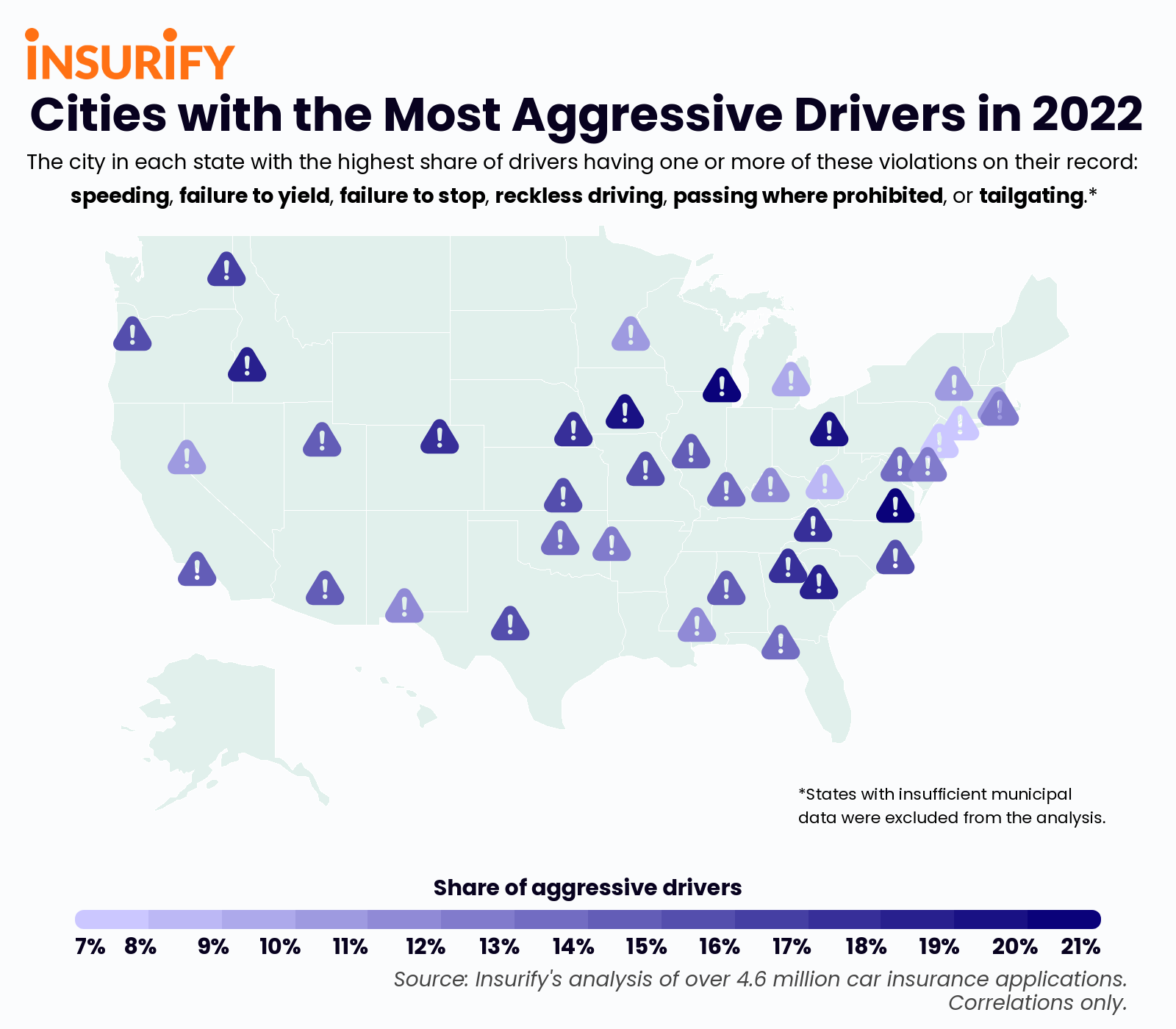 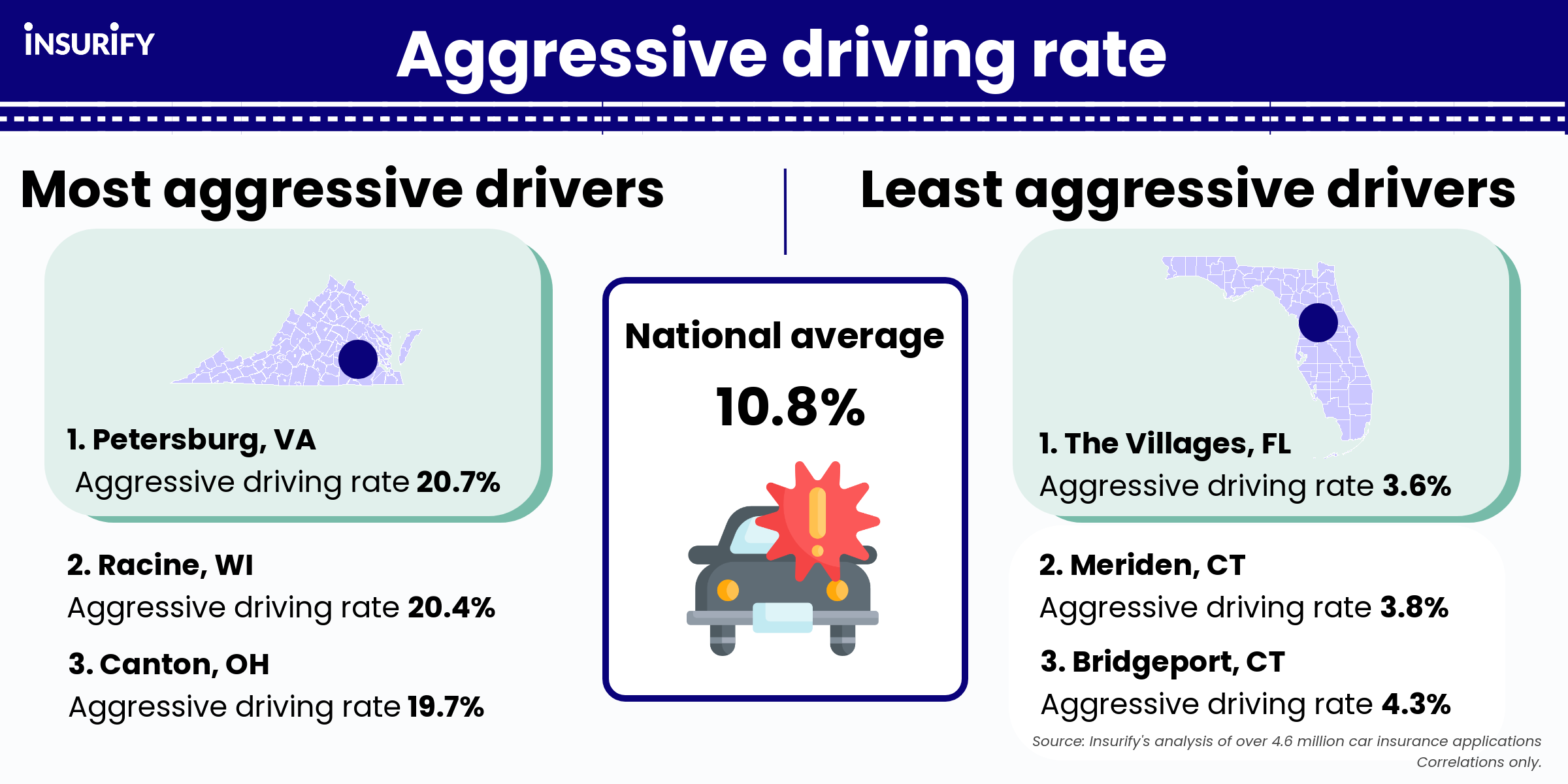 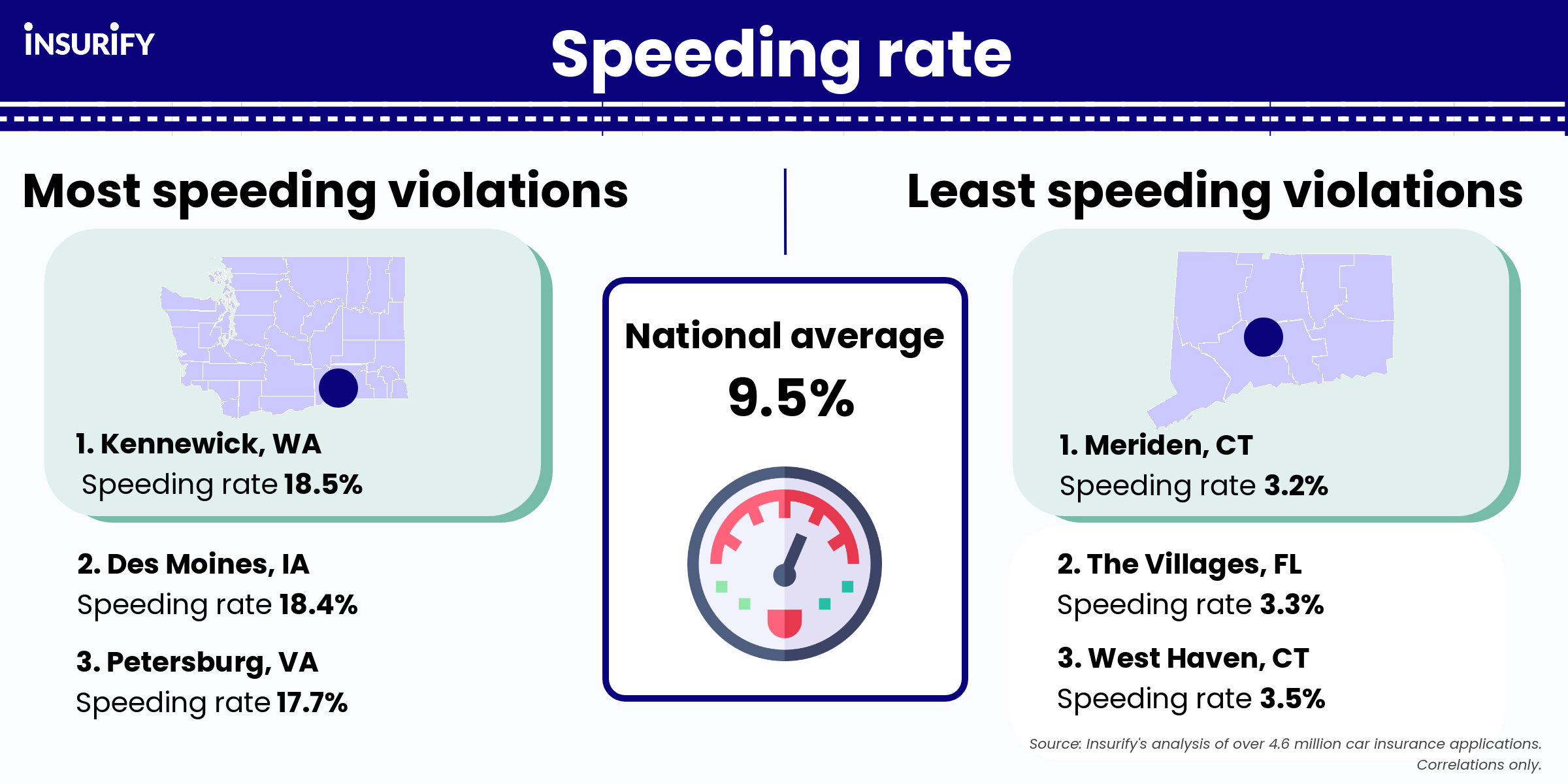 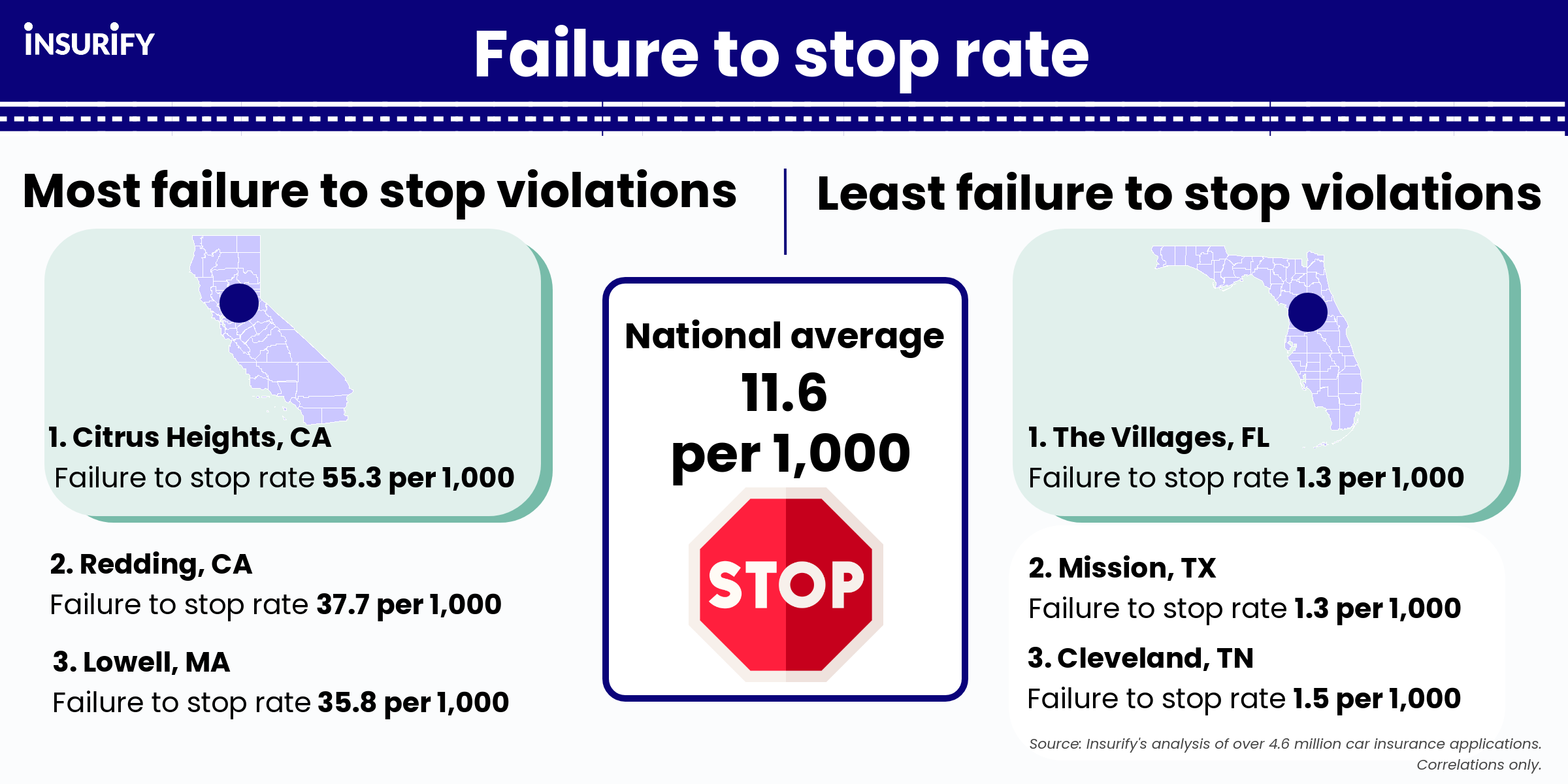 The data scientists at Insurify, an auto insurance comparison website, referred to their database of over 4.6 million car insurance applications to identify the city with the most aggressive drivers in each state.

To determine the most aggressive driving cities in the nation, Insurify’s data scientists calculated the share of drivers with one or more aggressive driving violations on their record in 660 U.S. cities. In each state, the city with the highest share of drivers with one or more of these violations on record was identified as having the most aggressive drivers in its respective state. States with insufficient municipal data were excluded from the analysis.

Cities with Most Aggressive Drivers

The Cities with the Most Aggressive Drivers by State

Compare car insurance quotes online in real-time with Insurify and see how you can save on your premium today.

Looking for cheap car insurance in Florida? Insurify’s got drivers in the Sunshine State covered to help insure your vehicle without breaking the bank.

For Lone Star drivers, getting the cheapest car insurance in Texas is made easier when you let Insurify compare personalized quotes to find the best option for your wallet. Compare and see how much you could be saving today!

Savings as sweet as (peach) pie! Insurify’s got all of the best options for the cheapest car insurance Georgia when Peach State drivers compare online.

Cheap auto insurance in South Carolina is easy to find for drivers who compare quotes online. Insurify’s the one-stop-shop for SC drivers looking to save.

Compare all your options for car insurance quotes in North Carolina with Insurify and see how much you could start saving on your premium ASAP.

Get quotes for cheap car insurance in Connecticut in just a few clicks. Compare with Insurify and see how you can stop paying less for coverage.

Cities With The Most Aggressive Drivers 2022