Which U.S. cities have been the quickest to return to public transportation during the pandemic? 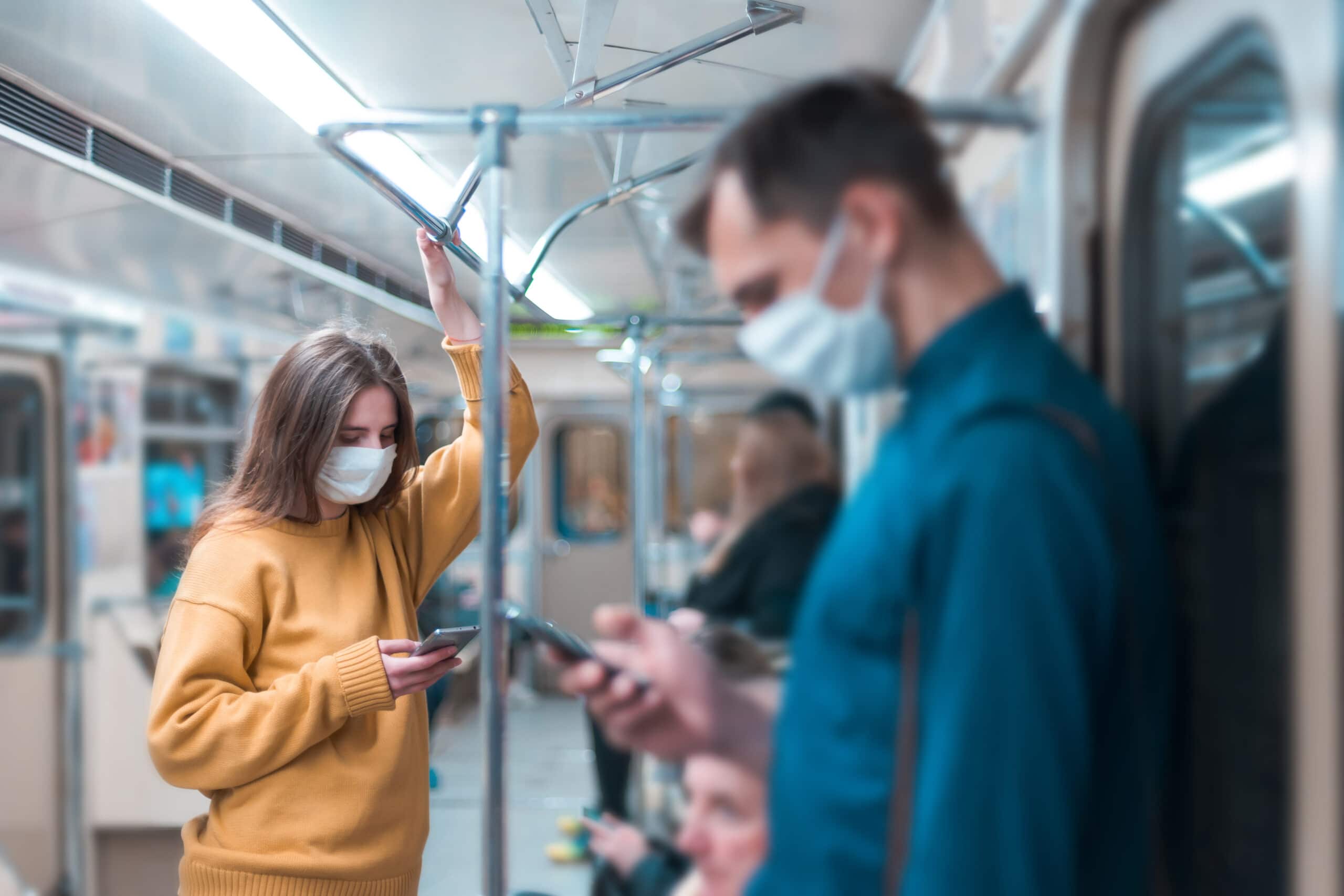 When the pandemic hit the United States in early 2020, leading to the enforcement of shelter-in-place quarantine orders, Americans experienced great fluctuations in their access to modes of transportation. Many local public transportation systems including bus routes and commuter rails were suspended, operating at limited capacity, or advised for use only when absolutely necessary by transit agencies due to the CDC’s social distancing recommendations. In cities like New York, where the subway system is an integral component of residents’ daily lives, mass transit may be seen as a great equalizer — take the subway at the busiest peak hours in Manhattan, and you’ll see a diverse ridership of commuters. However, limitations in the usage of public transit systems brought on by the coronavirus pandemic have quickly illuminated the economic disparity between city residents.

Many affluent residents with the privilege to flee the city to second homes have done so. Additionally, car sales have skyrocketed as those who can afford to purchase cars attempt to avoid mass transit systems. On the other hand, those who are not able to afford to leave the city, buy a car, or work a remote job are still dependent on train lines and bus services as their primary form of mobility, even as it leaves them more susceptible to COVID-19.

As the pandemic has progressed throughout the year, cities across the U.S. have been in fluctuating stages of re-opening and shutting down. In some ways, society is yearning to get “back to normal” even though the pandemic is nowhere near over. Part of getting back to normal for many cities is resuming rapid transportation use. Curious to understand the return to public transit across the United States, the data science team at Insurify examined the data to identify the cities with the largest rebound in mass transportation over the course of the pandemic. 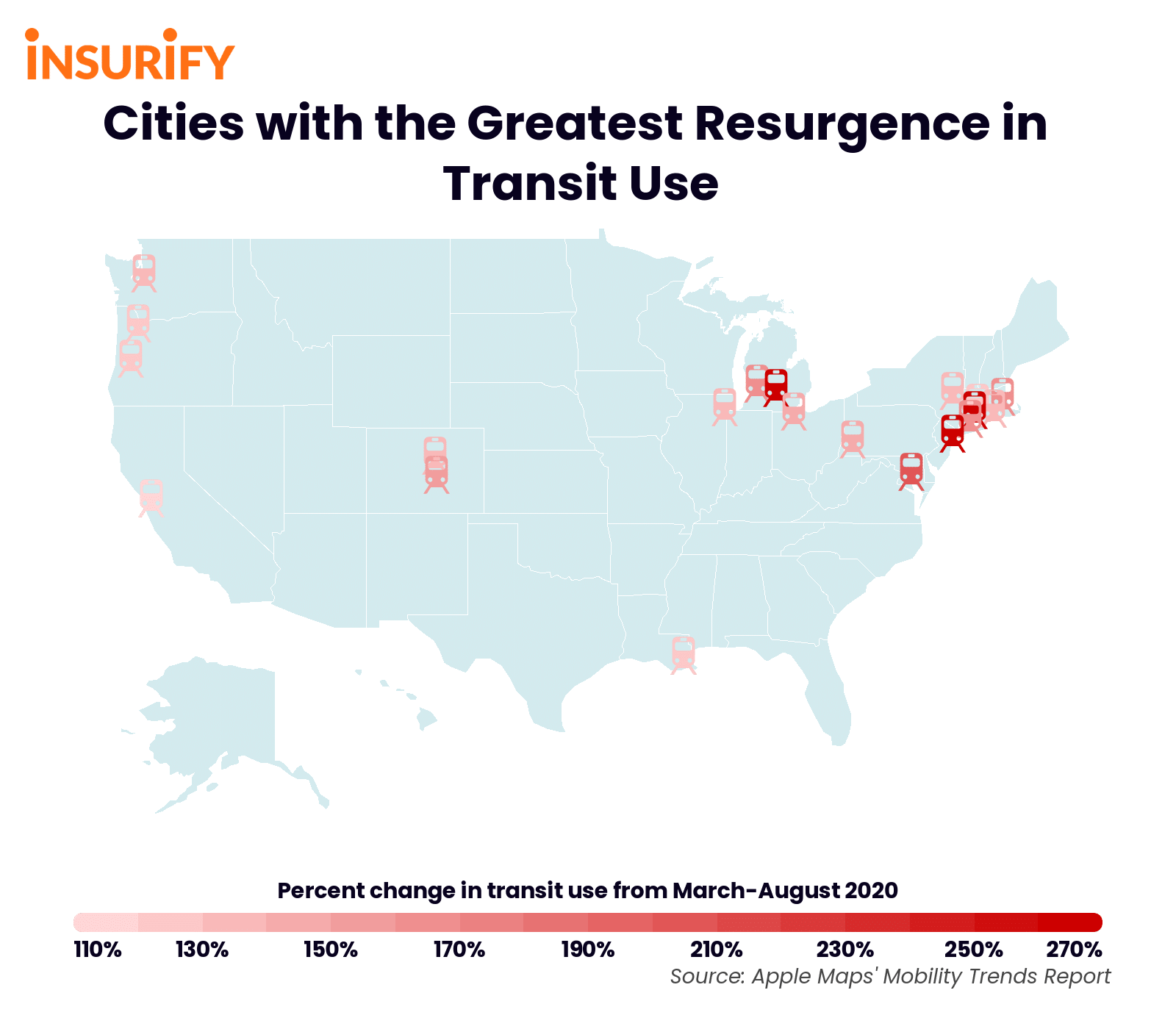 The data science and research team at Insurify, a car insurance comparison website, identified which cities have returned to public transportation at the quickest rates based on public transit data across 93 U.S. cities. Mobility data was provided by Apple Maps, which compares the daily volume of directions requests per city to a baseline volume on January 13, 2020. Data sent from users’ devices to Apple Maps services is anonymized.

Insurify’s research team calculated the percent change in the volume of transit queries between March 30th, the date when California was the first state to announce a state-wide lockdown, and August 14th. City transportation budgets were derived from each cities’ expenditure reports for the most recent fiscal year as disclosed on their municipal websites. The most recently available data was variable between cities, so Insurify’s research team consistently looked at whichever available date was the most recent — the least recent being FY2018, and the most recent from the adopted FY2020 budgets. The number of public transit commuters per city was extracted from the U.S. Census Bureau’s 2018 Community Survey, which recorded the breakdown of commute type within metropolitan areas across the United States.

Public transit use by city

In 2020, the cities that were quickest to resume using public transit following nationwide shelter-in-place orders starting in March 2020 include New York City, Boston, Chicago, and Seattle. The city with the greatest percent increase in transit use between March 30 and August 14, 2020 is Lansing, MI.

Cities with the Greatest Resurgence in Transit Use

Looking for cheap insurance in Kentucky? Insurify identified the best carriers in your state to get you the cheapest rates possible.

Drivers in the Beehive State, look no further for cheap car insurance Utah.

Maybe everything’s bigger in Texas, but that doesn’t mean your auto insurance rate has to increase — Insurify’s got you covered for finding cheap car insurance in Texas.

Insuring your car on the southern shores doesn’t have to break the bank. Find cheap auto insurance South Carolina today and save big on your policy.

Even in the automotive capital of the country, you can find affordable rates. Here’s how to get cheap auto insurance in Michigan.

The sun is shining of Sunshine State drivers with these rates — insure your vehicle with cheap car insurance Florida.

*These figures represent the total number of commuters within the wider metropolitan areas, respectively:

Learn More
Insights>Cities With The Greatest Resurgence In Transit Use