We’re all too familiar with those who drive at nearly a snail’s pace in bad weather. But what about drivers who do the opposite and behave recklessly when the road conditions are dangerous? According to the data, drivers of these ten cars are the worst in rain, snow, ice, wind, and fog. 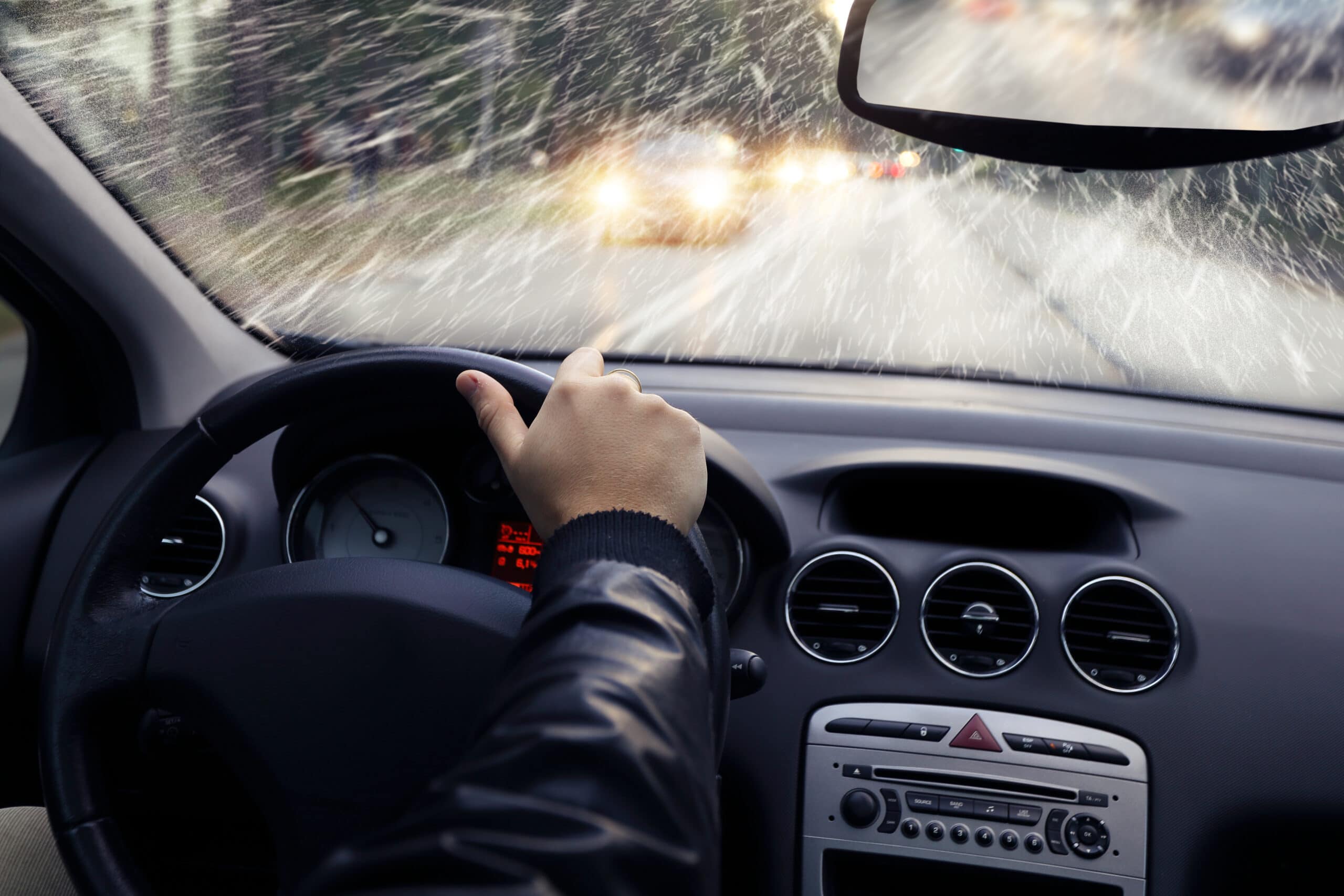 Sometimes even the posted speed limit can be unsafe, depending on a road’s conditions. Heavy fog, for example, can cause poor visibility, while rain, snow, and ice significantly decrease a car’s traction on the road. What constitutes a ‘too fast for conditions’ driving violation varies depending on visibility, road conditions, and surrounding traffic. However, as a rule of thumb, drivers are expected to drive at a speed low enough that they can stop in time to avoid a collision — this could mean reducing speed by one-third or more, depending on the circumstances.

Driving too fast for conditions is incredibly dangerous, not only for the driver but for everyone nearby. In fact, speed-related incidents account for over a quarter of all traffic fatalities, according to the National Highway Traffic Safety Administration (NHTSA). Driving too fast for conditions is also costly; in some states, the maximum penalty for this offense reaches $1,000 and possible jail time. It also can cause insurance rates to increase significantly, by 53 percent on average for drivers with this offense on their record.

Unfortunately, some drivers either ignore or are unaware of the dangerous and costly consequences of driving too fast for road conditions. They may overestimate their car’s capabilities in bad weather, or they may engage habitually in aggressive driving behavior. In fact, some car models seem to attract more of these unsafe drivers than others. To identify the car models with the worst drivers in inclement weather, the data scientists at Insurify referred to their database of over 4 million car insurance applications. 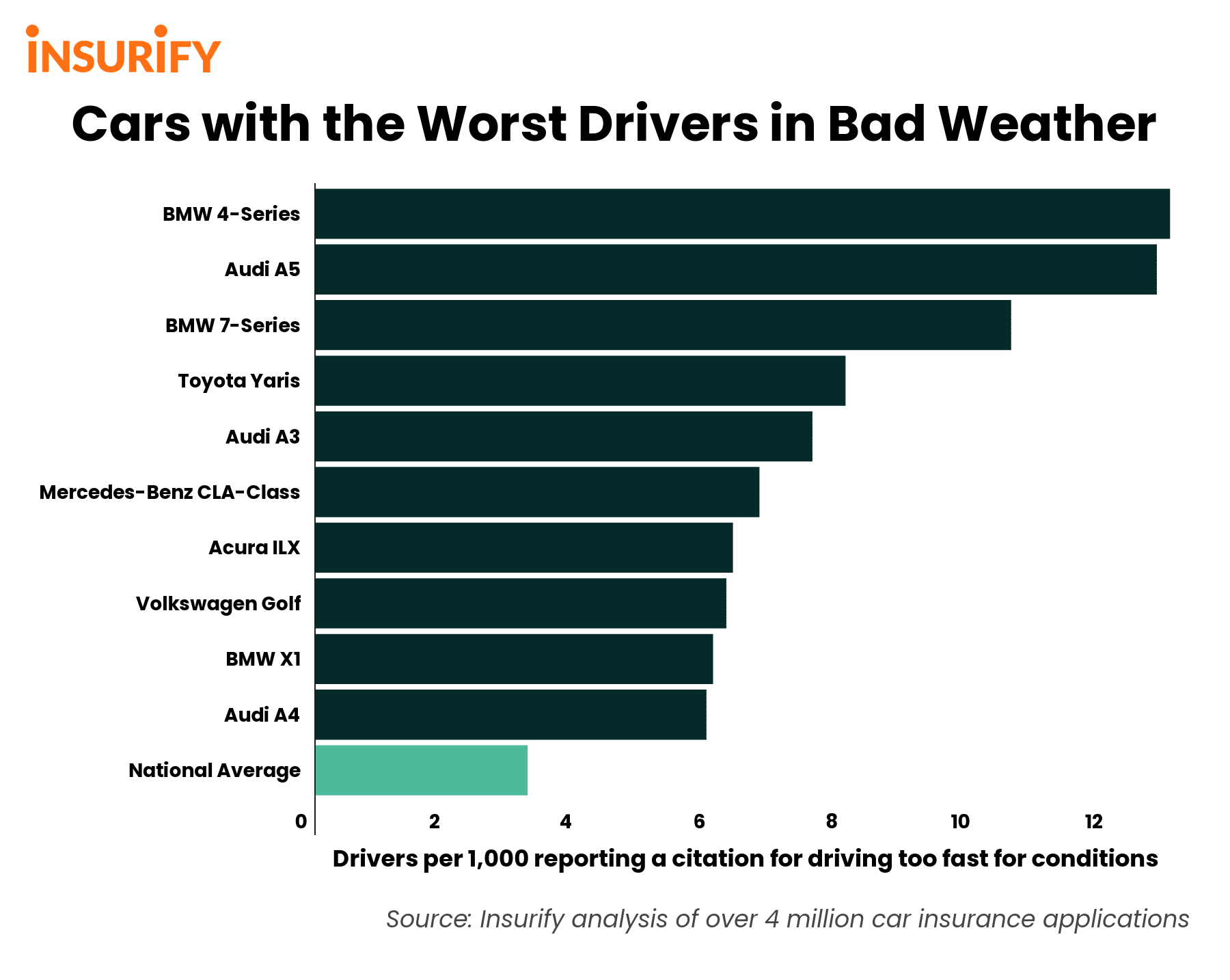 The data science team at Insurify, a website to compare auto insurance rates , referred to their database of over 4 million car insurance applications to determine the car models with the worst drivers in inclement weather. When applying for car insurance, drivers disclose information such as the car they drive and their recent driving history, including any prior moving violations such as a citation for driving too fast for conditions. For each car model, Insurify’s data scientists calculated the proportion of drivers reporting receipt of at least one citation for driving too fast for conditions. The ten car models with the highest share of drivers with this citation on their record were classified as the top ten cars with the worst drivers in bad weather.

MSRP and mileage data for all car models were collected from the manufacturers’ websites.

Drivers of these cars are the worst-behaved in bad weather


The 10 Car Models with the Worst Drivers in Inclement Weather

Rounding out the top ten cars with the worst drivers in inclement weather is the Audi A4. Drivers of this luxury vehicle are nearly twice as likely as the average driver to behave recklessly and dangerously in bad weather. The Audi A4 has a fun and sporty feel overall, and perhaps this attracts drivers who are more inclined towards irresponsible behavior on the roads. In fact, A4 drivers also have among the highest DUI rates in the nation according to a recent Insurify study, where this compact car came in at number four.

Tired of disclosing personal information to get an insurance quote? See how you can get an anonymous car insurance quote through Insurify, hassle-free.

Perhaps surprisingly, it’s possible to purchase auto insurance with no drivers license. It might seem odd at first thought, but there are a number of situations where an unlicensed driver will want to have auto coverage.

Drivers of this compact SUV tend to be a little too bold on the roads in bad weather, receiving a ticket for ‘driving too fast for conditions’ nearly twice as often as the average driver. Notably, the BMW X1 may be the only SUV of the ten cars with the worst drivers in bad weather, but it’s one of three BMWs to make the list. Unlike the other two BMWs, the X1 also features an intelligent xDrive (4-wheel drive) option, which redistributes power among all four wheels in real-time, to maximize traction on slippery roads. Perhaps this is a contributing factor to this car’s above-average rates of dangerous driving in poor weather conditions, where drivers become overconfident in their car’s abilities.

The Volkswagen Golf is one of the only two non-luxury cars to make the top ten cars with the worst drivers in inclement weather. Drivers of this sporty little car report receiving a ‘driving too fast for conditions’ citation nearly twice as often as average. Interestingly, the Golf’s more luxurious sibling, the Volkswagen GTI, ranks among the top 10 cars with the most speeding tickets. It’s clear that these two diminutive cars attract drivers who, unfortunately, drive a little too fast.

It’s never been easier to compare auto insurance rates in minutes, all in one place.

Read from our experts on finding the right car insurance quotes to fit your coverage needs and budget.

The Acura ILX ranks seventh in the nation for the highest share of drivers to receive a ‘driving too fast for conditions’ citation. Indeed, ILX drivers commit this moving violation nearly twice as often as the national average. The least expensive of Acura’s model lineup, the ILX still boasts “athletic agility” and “an impressive power-to-weight ratio”. Perhaps this sporty, compact car is a little too fun to drive, as it’s clear that drivers of the Acura ILX tend not to exercise as much caution as they should when driving in bad weather.

Ranking sixth on the list, the Mercedes-Benz CLA-Class has among the most dangerous drivers in bad weather. In fact, drivers of this luxury coupe are twice as likely as the average driver to reach unsafe speeds in inclement weather. Like many of the cars on this list, the CLA-Class boasts quite a few driving safety features and is touted as a “winter wonder” by the manufacturer. It seems that drivers of the CLA-Class put a little too much faith in the car’s driveability in poor weather, navigating at excessive speeds when the roads are slippery and visibility is poor.

Unsure of how much you should reasonably pay for car insurance? Our experts created a car insurance estimator to make insurance cost estimation and quotes comparison a painless process.

The Audi A3 rounds out the top five car models with the worst drivers in inclement weather. It’s also the second of three Audi vehicles to make the list. There’s no question that this sporty, compact sedan attracts more imprudent drivers than average; the rate at which drivers of the A3 receive ‘too fast for conditions’ citations is nearly twice as high as the national average.

The Toyota Yaris is the second of the only two non-luxury cars to make the top ten. Although the Yaris’s price point is quite low — the lowest on the list, in fact — the same cannot be said for this vehicle’s rate of ill-behaved drivers in bad weather. It may be surprising to find the Toyota Yaris among the ten cars with the worst drivers in inclement weather, given that it is neither sporty nor luxurious, two common traits among all nine others. Nevertheless, drivers of this compact car report receiving a citation for driving too fast for conditions nearly 2.5 times as often as the average driver.

All quotes comparison sites are not created equal. Our insurance experts weigh in on the best and worst sites to compare auto insurance quotes.

The BMW 7-Series ranks third in the nation for the highest share of drivers to receive a ‘driving too fast for conditions’ citation. In fact, drivers of this luxury sedan are more than 3 times as likely as the average driver to report having this violation on their record. Perhaps it’s this car’s inherent sportiness, but the BMW 7-Series tends to attract some of the more reckless and ill-behaved drivers on the roads, making the top ten in two other Insurify studies on driver behavior: drivers of the 7-Series rank seventh in the nation for DUIs and second in the nation for rude driving.

The Audi A5 has the second-highest share of drivers with a citation for driving too fast for conditions on their record. Drivers of this sporty sedan tend to be relatively impatient and aggressive in general, which could explain their propensity to drive unsafely in inclement weather. In fact, not only do Audi A5 drivers receive nearly four times as many ‘driving too fast for conditions’ citations than average, but they also are 1.5 times as likely to blow through red lights and stop signs than other drivers. Perhaps there’s something to be said for certain personality types gravitating towards particular cars.

The BMW 4-Series has the worst drivers in bad weather compared to any other car model in the United States and is the third BMW to make the list. With a rate of 12.9 drivers to receive a ‘driving too fast for conditions’ citation, these drivers are nearly 4 times as likely as the average car model to drive dangerously fast when road conditions are bad. Owners of the 4-Series tend not to be the most well-behaved drivers on the road; this sporty luxury vehicle also tends to attract the nation’s rudest drivers.