Bad day at the office? These occupations have the rudest drivers in 2021; the list might surprise you. 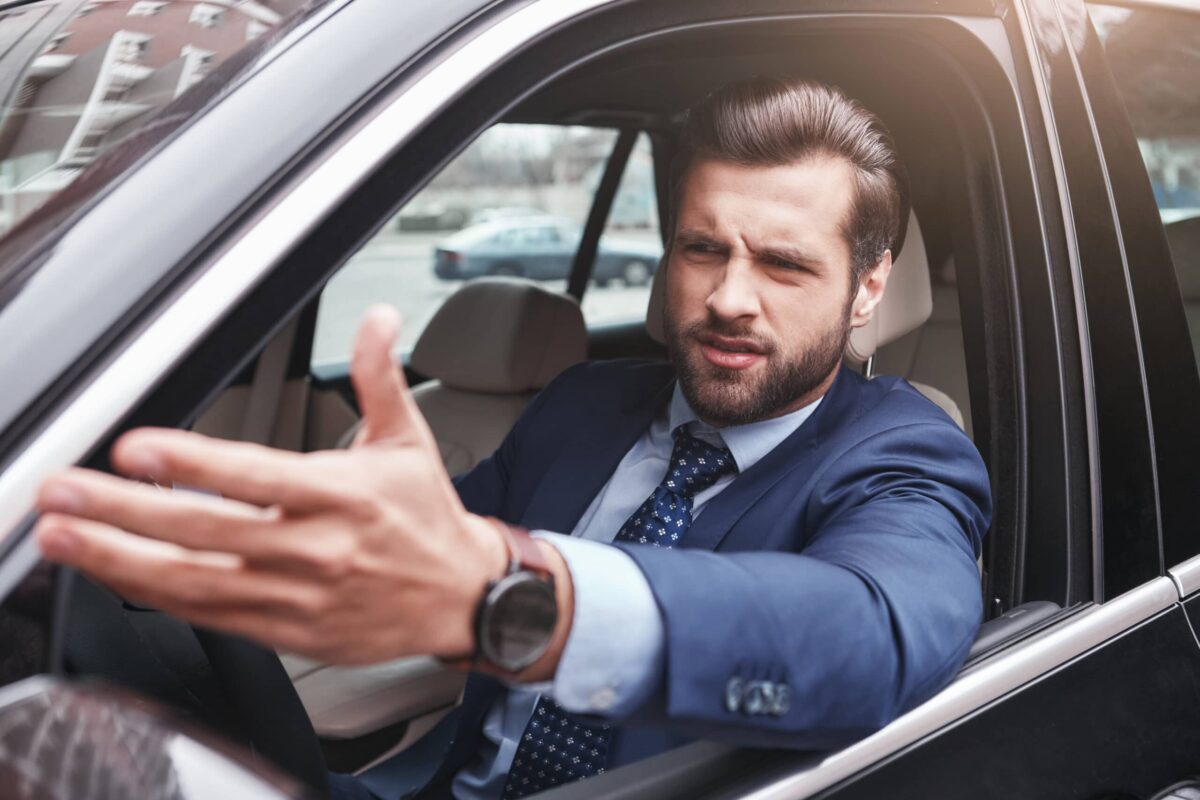 People’s jobs say a lot about who they are, from their skills and strengths to their values and aspirations. But who knew that your choice of career could shed light on your driving habits, too? As it turns out, someone’s profession can reveal much about how they act behind the wheel, especially when it comes to some of the worst behavior on the road: rude driving. The most egregious rude driving practices—such as failing to yield, tailgating, or passing where prohibited—are not only annoying but also incredibly dangerous to fellow motorists and pedestrians.

All professions have their share of ill-mannered drivers, but certain occupations have drivers that exhibit frightfully high rates of the most extreme forms of rude driving behavior. To see which jobs’ drivers experience higher traffic violation rates, the data scientists at Insurify turned to their database of over 4 million car insurance applications to determine the rudest driving occupations in 2021. 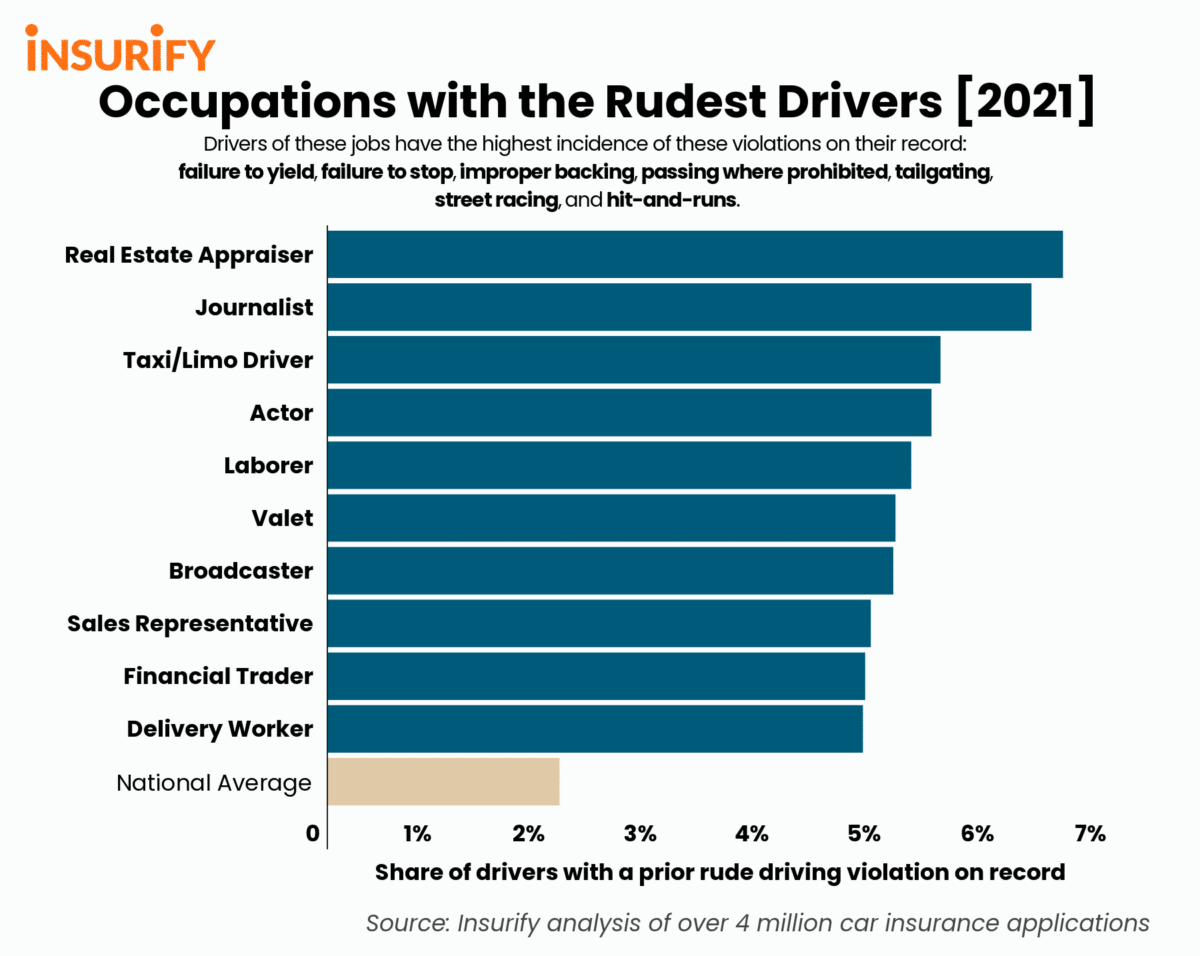 Data scientists at Insurify, an auto insurance comparison site, referred to their database of over 4 million car insurance applications to identify the occupations with the rudest drivers.

Data on employment and wages come from the Bureau of Labor Statistics 2020 employment estimates.

Top 10 Jobs with the Rudest Drivers

10 Occupations with the Rudest Drivers

Need an anonymous car insurance quote? We understand. Insurify helps all drivers find the coverage they need in just a few easy steps.

Ever wondered how to get car insurance without license? So did we! Let Insurify be your guide to getting covered.

Financial traders are generally characterized in popular culture as brash, fast-paced, and perhaps not the most polite. While this is obviously not true of every Wall Street trader, the profession does rack up rude driving citations 2.3 times more often than average, and they also have by far the highest average salary of any occupation on this list. As such, it’s no surprise that financial traders have a less-than-positive perception in the public eye, though at least they are well equipped to cover the insurance hikes that follow any rude driving infraction.

The most popular profession among the top ten occupations with the most rude driving violations, sales employees accrue rude driving citations at a rate 2.3 times greater than the national average. Though sales representatives always care for their customers, this care does not always come out while driving. Sales reps are one of just two occupations on this list whose most common rude citation is the failure to yield to another driver.

Boom. Easy. Insurify is your one-stop-shop for car insurance quotes. Compare and save today!

Ever wished you could get all your auto insurance quotes in once place, instantly? The wait is over with Insurify, where you can compare rates from top carriers and find the best plan for your budget.

Announcers and broadcasters, especially at the local level, often endear themselves to their community by providing a familiar presence on the morning news or narrating the ups and downs of a beloved sports team. This good will, however, does not seem to extend to the roads, as broadcasters rank seventh on the list of the rudest driving occupations. A full 5.03 percent of broadcasters have a prior citation for rude driving on record, making them 2.4 times more rude on the roads than the typical driver.

Valets handle important business: worrying about your car, so you don’t have to. While valets are great with other people’s vehicles, even with all that extra driving, they are more likely than the average driver to receive a citation for rude driving behavior. 5.03 percent of valet drivers have a rude driving citation on record, and they most commonly fail to stop at a stop sign.

Does searching for car insurance have you lost in the exhaust? Cut through the fog with Insurify’s car insurance estimator, which lets you easily calculate the best rates for your budget.

No one said it was easy to shop auto insurance. But with Insurify, it doesn’t have to be hard, either. Quickly find the best plans for your budget and get on with your day.

For anyone but the brightest of stars, acting is often a stressful profession. Constantly auditioning for new roles while working irregular hours can lead to many tired, apprehensive, or even downright angry commutes, and these factors might ultimately lead to increased rude driving behavior. Overall, 5.37 percent of actors have a rude driving violation on record, a proportion that is well over twice the national average.

Journalists undeniably have high-pressure jobs with tight deadlines, unusual hours, and frequent travel. Understandably, the ensuing stress can lead to some regrettable behavior out on the road—journalists are cited for rude driving behavior 3.0 times more often than the national average. Fortunately, they also have the second-highest average annual wage of any occupation on this list, and so should be better able to cover any fines or insurance premium hikes that may ensue from their careless behavior.

Who would have thought that real estate and property appraisers would accumulate the most citations for rude driving? 6.54 percent of property appraisers have a rude driving citation on record, a rate that is over 3.2 times greater than the national average. Appraisers have the important job of establishing a property’s value prior to sale. As such, real estate appraisers do spend a fair bit of time driving when commuting to various properties, which creates more opportunity to be cited for rude behavior. Their citation record does suggest, however, that they are less inclined to let the rules of the road keep them from where they are headed.