Insights>Car Models With The Most Speeding Tickets

There are a lot of stereotypes about which cars are most likely to speed, but these are the models that actually have the highest rate of speeding tickets. 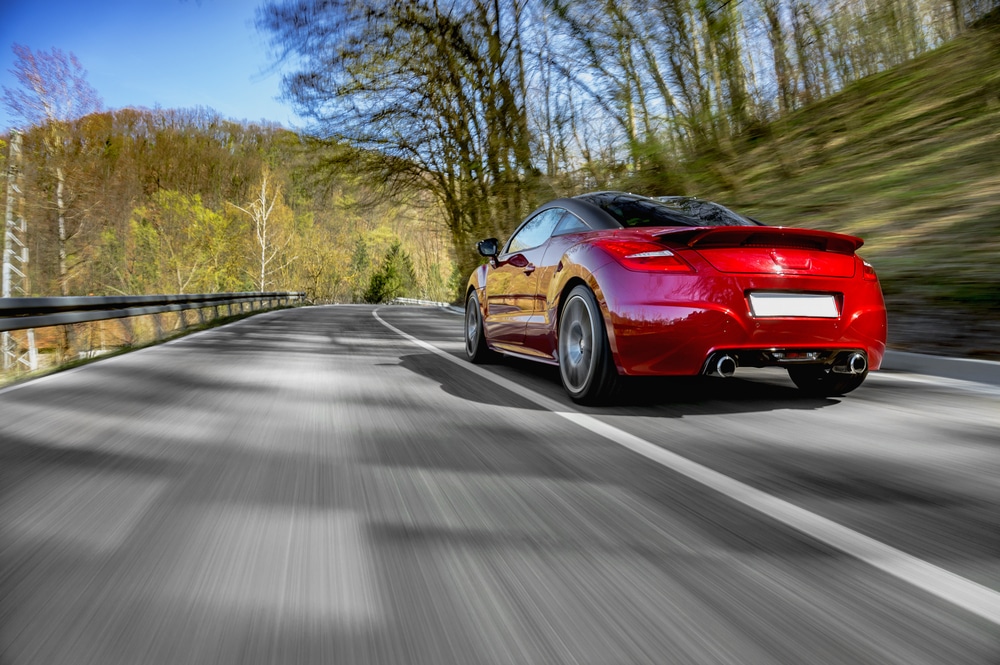 Picture the following scenario: You’re cruising down the highway during a nice summer day, admiring the scenery in front of you. All of a sudden, another car whips by in the next lane over, going at a speed well over the legal limit. Ask someone who didn’t witness the event what kind of car was speeding and they would probably lean into the well-worn stereotype: some type of sports car, perhaps a BMW or Mercedes. There might be some truth to that stereotype. After all, those types of cars have the capability for higher speeds. The question is, does the data actually back up that stereotype? To find out, the research team at Insurify decided to look at the numbers to discover which car models are most guilty of speeding. 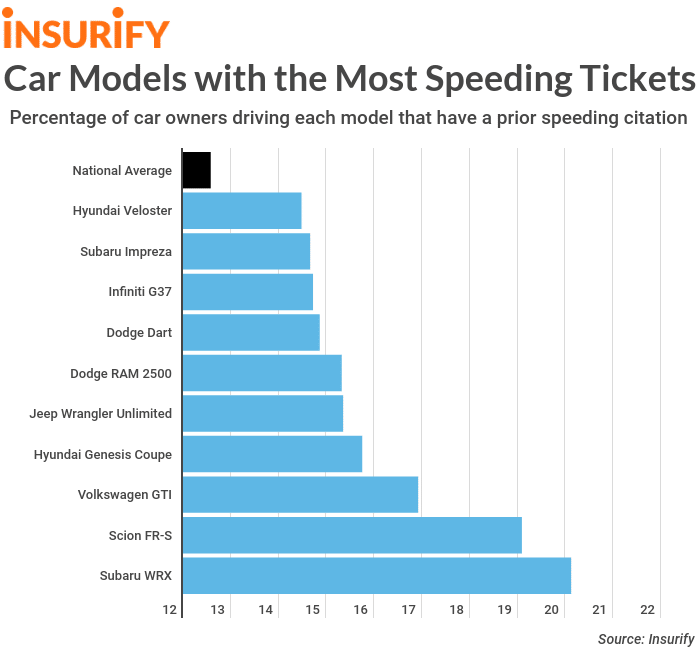 1. Subaru WRX - Percentage of WRX drivers with a speeding violation: 20.12%

3. Volkswagen GTI - Percentage of GTI drivers with a speeding violation: 16.92%

7. Dodge Dart - Percentage of Dart drivers with a speeding violation: 14.86%

9. Subaru Impreza - Percentage of Impreza drivers with a speeding violation: 14.66%

10. Hyundai Veloster - Percentage of Veloster drivers with a speeding violation: 14.48%

To determine which car models are cited for speeding most often, the research team at Insurify, a website to compare auto insurance, took a look at their database of over 1.6 million car insurance applications. To apply for quotes, drivers input personal and vehicle information, including the model of car they drive and whether or not they have been convicted of speeding in the past. The research team analyzed the number of cars for each model with a prior speeding violation against the total number of each model to determine the proportion with a speeding violation. They then selected the models with the 10 highest shares of ticketed drivers. Data on the cars’ MSRP and horsepower was compiled by USNews and Autoblog.

The Veloster is certainly cheap, boasting the second-lowest MSRP of any vehicle on the list. Hyundai describes the Veloster as “a unique expression of Hyundai’s bold side,” and as having “a sportier, more aggressive design.” Perhaps drivers of the vehicle are taking that advertising to heart.They’re certainly aggressive on the roads, as nearly 15 percent of the drivers in Insurify’s database who own a Veloster have a prior speeding citation.

Got no idea how to find the best car insurance for you? Look no further than some of the best insurance comparison sites.

If you’re an Uber or Lyft driver, take a look at some great carriers of rideshare insurance.

The Impreza is a classic midsize vehicle with remarkable durability. According to Automotive Lease Group, Inc. (ALG), it retains more residual value than any other car in its class. It’s also affordable, with the third-lowest base MSRP of any vehicle in the top 10, though it won’t provide you with much power. The base model has the second-worst horsepower of any car on the list.

The Infiniti G37 was discontinued after production of the 2013 model, and rebranded as the G40, but it still ranks in the top 10. Nevertheless, it’s one of the more versatile cars on the list, with convertible, sedan, and coupe models. It’s also one of the most powerful cars on the list. The G37’s reported horsepower range is the third-highest of any vehicle in the top 10.

Trying to find insurance in the Golden state? Here are some places to get car insurance quotes in California.

If you have a history of driving violations, consider your options for high risk auto insurance.

One other online insurance quotes platform is The Zebra insurance.

Much like the G37, the Dodge Dart is no longer made. Production stopped in 2016 in the United States due to poor sales, despite the Dart being Dodge’s only compact sedan. Evidently, despite its low price—the Dart is as the cheapest model on this list—and excellent safety ratings, it didn’t perform well with consumers. Sales maxed out at 87,908 units in 2015. For comparison, the Toyota Camry—which was the highest-selling midsize sedan of 2015—sold over 400,000 units that year.

Pickup trucks are more often associated with long cruises in rural areas than aggressive speeding, thanks in part to a multitude of country song lyrics, but the RAM 2500 appears to be the exception. It is the only pick-up truck in the top 10, and over 15 percent of drivers of the RAM 2500 have at least one prior speeding violation. The car is also one of the pricier and most powerful cars on the list, with the third-highest base MSRP and highest horsepower of any vehicle on the countdown.

These are a couple excellent carriers for no deposit auto insurance.

Much like the RAM 2500, the Jeep Wrangler Unlimited doesn’t come to mind when you think of a vehicle flying down the highway at high speed. Nevertheless, Wrangler Unlimited owners have an issue with driving too quickly. The car isn’t cheap, either. The Wrangler Unlimited, which is the slightly larger and pricier version of Jeep’s highly popular Wrangler, is the second-most expensive car on the list.

The Genesis Coupe is the second Hyundai model to crack the top 10, though it is no longer produced. Like the Dodge Dart, the last Genesis Coupe model was the 2016 version. Alongside the Veloster, the Genesis Coupe is also one of just two Korean vehicles on the list. Drivers seem to be keen to enjoy its horsepower—which is higher than all but one other car in the top 10—as motorists in a Genesis Coupe speed at a rate more than 25 percent greater than the national average.

Just one model in Volkswagen’s popular Golf series of vehicles, the GTI is designed to be more of a high-performance car than the traditional Golf, with a high-powered engine that exceeds the capacities of the standard model. It’s also affordable, as one of the five cheapest vehicles on this countdown.

Scion, a former offshoot of Toyota, was a brand designed to appeal to younger drivers that went defunct in February 2016. The FR-S was designed with a sports-car feel in mind, with Car and Driver magazine saying that the car offers “sports-car agility on a budget.” That aforementioned appeal to younger drivers may have something to do with the car ranking so highly on this list. Research from the Center for Disease Control (CDC) has shown that young motorists, especially teens, are more likely to speed.

No car model boasts a higher percentage of speeding drivers than the Subaru WRX. Over one-fifth of drivers that own a WRX have been ticketed for driving too quickly in the past, a rate that’s 60 percent greater than the national average. On the bright side, the WRX is also one of the safest cars on the market. It earned the highest possible safety rating from the Insurance Institute for Highway Safety (IIHS), thanks in part to newly developed driver assist technology that Subaru claims can reduce the rate of rear-end collisions by up to 85 percent.

Learn More
Insights>Car Models With The Most Speeding Tickets