Make Yourself at Home: Cities with the Most Homeowners

Home is where the heart is, and in these cities, there are more homeowners than anywhere else in America.

Click here to see the Communities with the Most Homeowners report for 2020.

There are many considerations that go into purchasing personal property. What is your financial situation? What are your current needs? How might those needs change moving into the future? Do you plan to insure against damage from tragedies such as fire, theft, or flood? Buying a house is a massive financial goal, and many prospective-purchasers spend years saving up to properly afford, furnish, secure, and insure that home.

It’s no secret that residential areas tend to form in blocks. Whereas young renters often live in more urban centers—with their units interspersed among retail, industry, and service venues—homeowners flock together in neighborhoods and suburbs.

Not all cities have an even distribution between these renters and owners. As it happens, more of those owners tend to end up in some communities than others. Curious about these preeminent cities, Insurify, a home insurance quotes comparison site, combed the data to find the top 20 cities for homeownership by state. 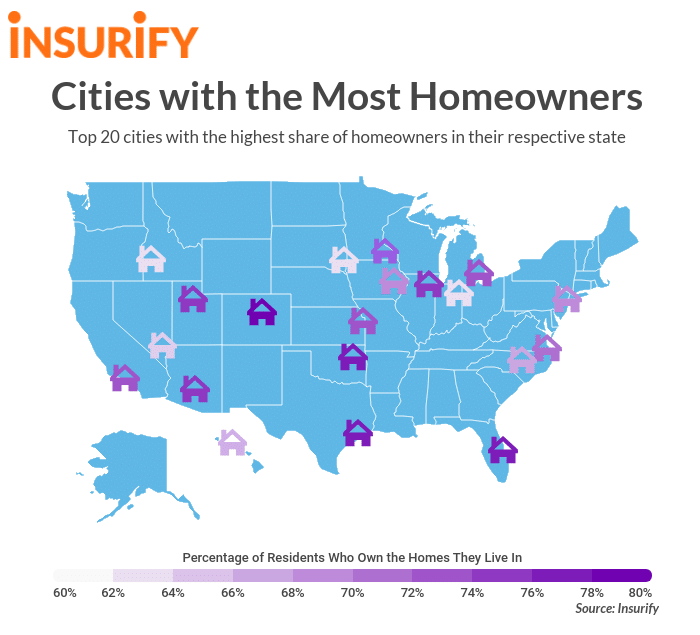 The team of data scientists at Insurify, a platform that lets users compare home insurance quotes, analyzed data from City-Data.com to identify and explore the top cities in each state with the highest percentage of residents living in homes that they own. All cities in consideration had a population exceeding 100,000 for an analysis that focused on cities that are mid-size or larger. The team also gathered data on average household income for both city and state, as well as the share of married individuals who are 15 and older.

US Cities with the Most Homeowners

Take a look at the best and worst sites for auto insurance comparison.

You’re just seconds away from a quick estimated quote with our new car insurance calculator.

For drivers in their early twenties, make sure you are finding the best options for car insurance for under 25.

For drivers still in the renter economy, make sure you find the best car and renters insurance option.

Cheap car insurance in California is hard to come by. We can help with that.