In the life insurance industry, insurance agents are disciplined in ethical practices. Insurers apply ethical standards for the welfare of the industry and must follow guidelines formed by their state. But in an industry where most states don’t regulate insurers ’ acceptance of a risk, the insurance business may seem very unfair, and it’s hard for people living with HIV/AIDS to find coverage. But recently, things have changed.

Thanks to antiretroviral therapy, people with human immunodeficiency virus (HIV) now have longer life expectancies. Innovations in science, such as PrEP, allow HIV-positive people greater manageability over HIV infection. Though premiums will be higher for people with health conditions, the life insurance market is opening up to accommodate people living with and managing HIV.

Using Insurify will help you find the right policy to fit your life insurance needs. No matter what your circumstances may be. With Insurify, you can examine and compare life insurance quotes from the best life insurance companies; whether you’re looking for a policy without a medical exam or final expense coverage, Insurify has you covered.

Can You Get Life Insurance If You Have HIV?

But with medical advancements, people with HIV are living longer and having fewer complications from HIV-related illnesses. Because of this, some states are proposing bills for life insurance to be accessible to people with HIV. Some life insurance companies are also adjusting their underwriting process to meet the needs of people living with HIV.

The state of California has passed Senate Bill 961, The Equal Insurance HIV Act, which was introduced by State Senator Lena Gonzalez. The bill provides anti-discrimination protection and says that insurers cannot refuse an applicant for life insurance based solely on a positive HIV test. The bill goes into effect on January 1, 2023.

With this bill going into effect in California in the future and insurers just opening up to HIV-positive people, life insurance companies are balancing ethical behavior and risk management to introduce HIV life insurance. Underwriting during a traditional life insurance policy’s application process must also be reevaluated to adjust to applicants living with HIV.

Life insurance agents and insurers are expected to act ethically and resolve ethical problems as they arise. Ethics, as it relates to insurance, refers to behavior, conduct, and actions as opposed to personal beliefs, which are considered morals. State regulations that govern unfair and prohibited practices cannot take disciplinary action against insurers or agents for their morals.

When working in a business, you may perform duties that you don’t believe are right, such as rejecting an applicant based on their health status. But you are obligated to because the risk is considered too great by the insurance company. And vice versa:  you cannot deny a person coverage based on factors considered acceptable risks. Smoking is an example of acceptable risk.

As a business and not an individual, you have a better ability to make an impact on the world. For example, an individual who donates a percentage of their income to a charity most likely wouldn’t make as much impact as a business that donates a percentage of their earnings. Due to this, life insurance companies can make a greater impact when including people living with HIV.

The CDC reports that 1.2 million people in the United States are living with HIV. They state that advancements in treatment and care have enabled people with HIV to live just as long as people without HIV. Because people are living longer with HIV, the applicant’s risk of loss to an insurance company has decreased.

Underwriting is the part of the life insurance application process when it is determined whether to accept or reject an applicant based on their risk. A risk in life insurance means the chance of loss. If an applicant is approved for a policy and subsequently passes away a year later, the insurance company has more than likely suffered a loss due to a payout without collecting many premiums.

Life insurance is concerned with pure risk, which involves only the chance of loss and no gain. This is contrary to a speculative risk, such as investing in the stock market, which can result in loss or gain. Elements of an insurable risk to a life insurance company are as follows:

When assessing the risk of applicants with HIV, insurers may ask health questions related to your antiretroviral therapy, viral load, CD4 count and may request information from your doctor.

What Types of Policies Cover People with HIV?

Term life insurance lasts for a specified amount of time, and at the end of that time frame, the policy ends. If you outlive the policy, it expires without paying out a benefit. If you pass away within the term limits, the policy pays the death benefit to your beneficiaries. Most term life insurance products are guaranteed renewable and convertible, meaning you can convert the policy to a whole life policy.

How Much Does Life Insurance Cost for Someone with HIV?

Mortality in life insurance reflects the insured’s risk of death. The higher your risk of death, the higher your premiums will be. The National Association of Insurance Commissioners (NAIC) compiles a list for life insurance company actuaries to base mortality on called the Commissioners Standard Ordinary (CSO) Table. Furthermore, applicants are classified into risks: a preferred risk, a standard risk, or a substandard risk.

A preferred risk pays lower monthly premiums than a standard risk because they are in good health and have an excellent medical history. A standard risk is an acceptable risk, and policyholders pay standard life insurance rates. Applicants with chronic illness are at high risk to life insurance companies and pay higher premiums.

Unless you’re applying for a guaranteed issue policy, you will find that most types of life insurance policies require you to have a medical exam or to at least answer health questions and inform them of your medical conditions. They may also request medical records. Insurers will want to know about your HIV status, previous history of HIV-related illness, antiretroviral therapy, viral load, and CD4 count.

In the ’80s, at the beginning of the AIDS epidemic, an AIDS patient ‘s life expectancy was one to two years. Today, with the evolution of anti-HIV medicine called antiretroviral drugs, HIV-positive people are living longer, and it also helps greatly reduce the risk of transmitting the virus and catching the virus if you are at risk. Antiretroviral therapy works best when an HIV diagnosis is made in the early stages of the disease.

HIV infects cells and harms your immune system by killing CD4 T cells, whose job is to fight infection. People who remain untreated are not able to fight off many common infections. Antiretroviral drugs are protease inhibitors that suppress the viral load in the body. Insurers may include exclusions for hepatitis, drug use, or a history of HIV-related illness.

How Much are the Death Benefits for Someone Living with HIV?

Use Insurify to find the right coverage that fits your and your loved ones’ needs. With Insurify, you can quickly compare quotes from insurance companies that offer whole life, term life, and no- medical-exam policies. You can apply for a policy in minutes or speak to a life insurance representative.

A New Chapter in Life Insurance

Life insurance companies have just begun to open their doors to people living with HIV. The future looks promising, with innovations in medicine that have added to the life expectancy of people with HIV. Though the path is not entirely clear and people with a chronic illness will still have more difficulty qualifying for a life insurance policy than those without, the steps are being taken toward a brighter tomorrow. 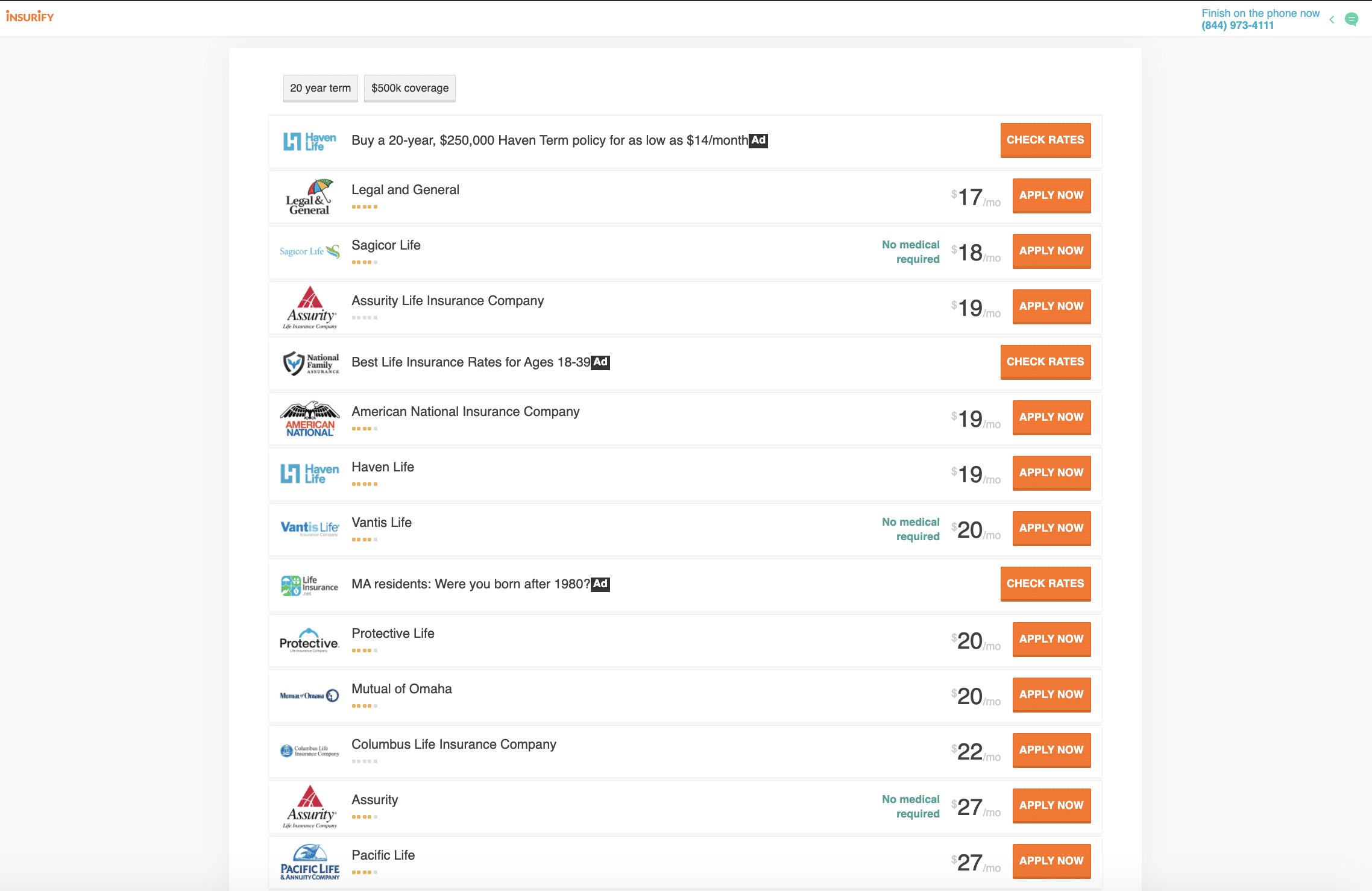 Edited by
John Leach
Insurance Content Editor at Insurify
John Leach is an insurance content editor who has worked in print and online. He has years of experience in car and home insurance and strives to make these topics easy to understand for everyone. He has a linguistics degree from UC Santa Barbara.
Read more from John Leach