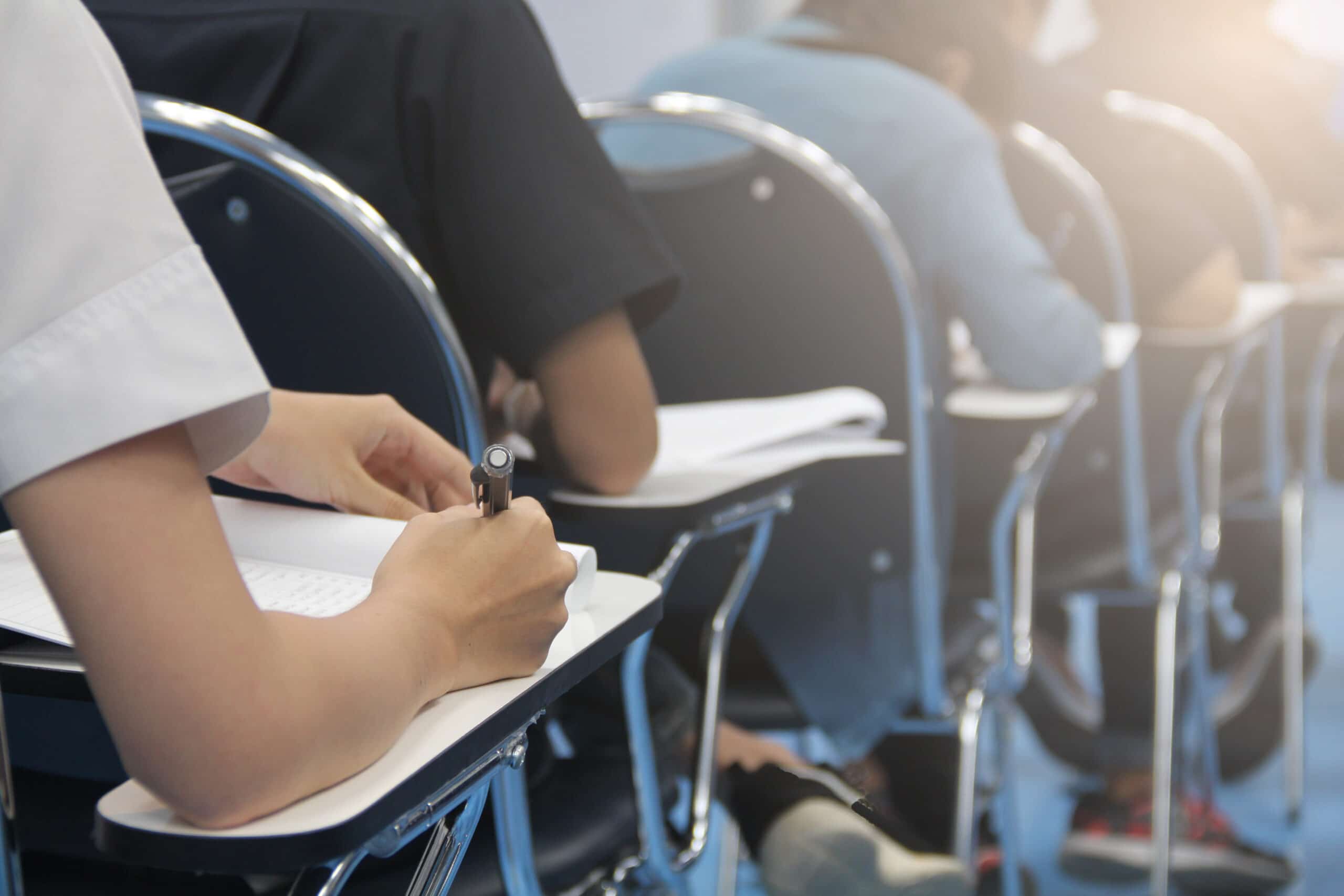 The call for states to reopen schools has stirred up nationwide apprehension. With the federal government threatening to withhold education funds to states who refuse to reopen with in-person instruction, states are struggling to find solutions. The stay-at-home quarantine orders have unsettled the lives of students from pre-K to high school, and many students (and their families) may be eager to leave the house and join their classmates again. However, reopening school systems may only exacerbate the predicted second-wave of the coronavirus pandemic. Opening up schools will leave many people in precarious situations — not only will students, teachers, and administrators will greatly increase their own risk of infection, but also become likely transmitters to members of their households.

Classrooms are not uniform across the nation. While access to quality education is presumably afforded to all children in the United States starting in elementary school — compulsory education laws put forward by the Education Act of 1996 require children between the ages of 5 and 16 to be enrolled in full-time education in all fifty states — schools are not funded equally nationwide. Because public schools receive funding through both the federal and state levels, the conditions of schools may appear variable between states. Most importantly, the quality of education within a school district is inherently dependent on the affluence of residents within its zip code — property taxes have historically been used as a significant source to fund education.

Quality education does not solely consist of sufficient instruction and supplies, but a stable classroom environment where students feel safe, supported, and valued. Even before the pandemic, overcrowded classrooms posed a direct threat to student learning capacity — as teachers become overburdened with large classroom sizes and are unable to pay due attention to each pupil, it’s easier for some students to fall through the cracks. Now, with the threat of the coronavirus, the conditions of these cramped school buildings are even more concerning. The order to reopen in the fall is especially pernicious for historically underfunded schools whose facilities are less likely to accommodate CDC-recommended social distancing requirements. This will only heighten the disproportionated effect of coronavirus on vulnerable, low-income populations. Without the ability to properly social distance at six feet apart in classrooms and hallways, reopening school is a hazardous gamble. To determine which regions may be at the highest risk come fall, the data and research team at Insurify studied national public school data to find out which states have the most crowded schools. 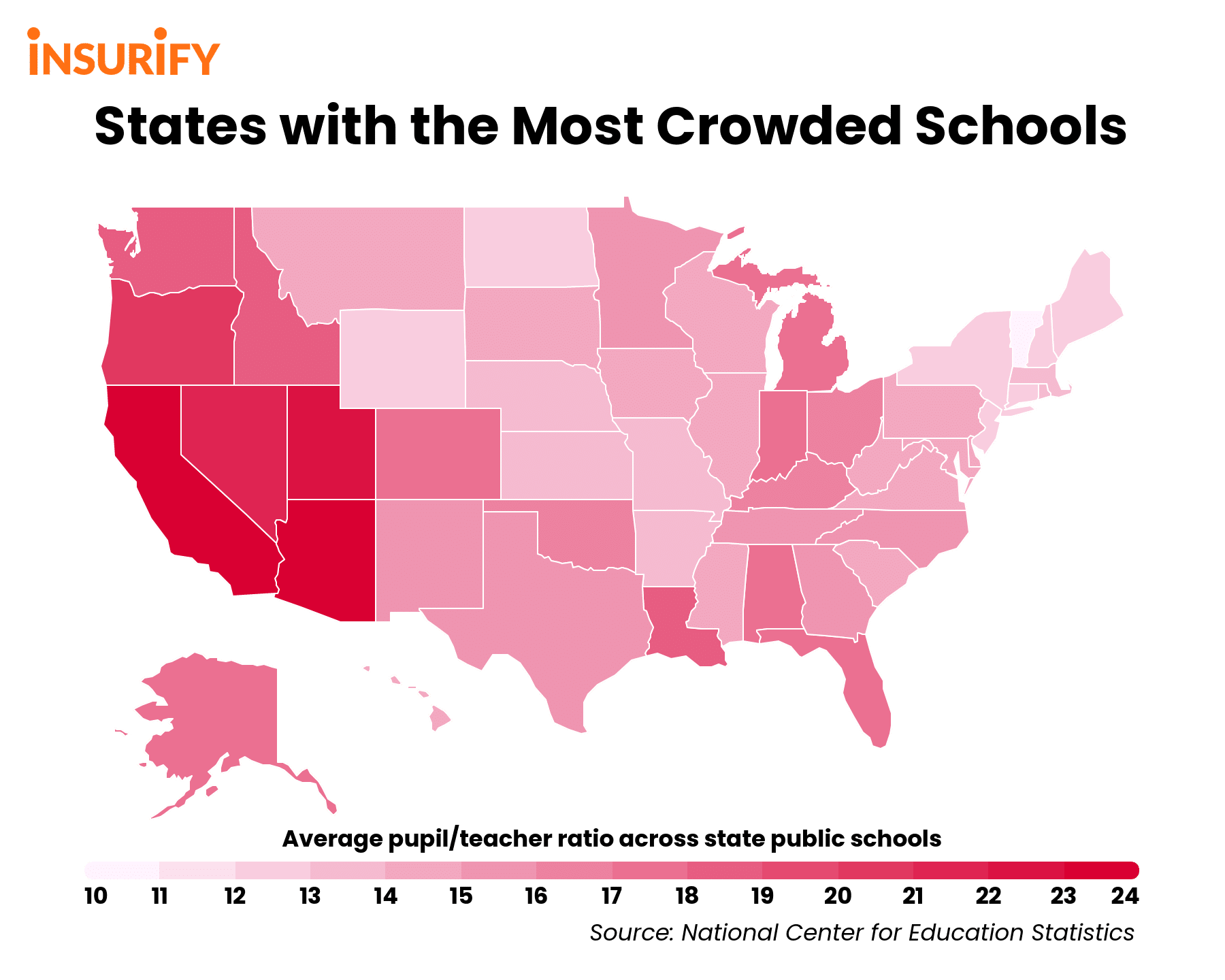 The data and research team at Insurify, a website to compare home insurance quotes, referred to data from the Institute of Education Sciences’ National Center for Education Statistics (NCES), the nation’s primary federal entity for collecting and analyzing data related to education. Pupil/teacher ratios were recorded on the state level yearly — the statistics for this study used the most recent tabulations from the 2018-2019 school year. The education data collected pertains to state-run public education systems and does not include statistics from private schools.

Data on total school expenditures came from NCES’s National Public Education Financial Survey, taken from its most recent report in 2017. The National Public Education Financial Survey documents state-wide spending patterns on education and related services. Spending per student was calculated by dividing the total education expenditure by the total student membership count for each state.

Overcrowding in Schools by State

States with the Most Crowded Classrooms

States with the Most Crowded Schools

Alabama kicks off the list as the tenth state in the nation with the most crowded schools. Although Alabama does not have a particularly high population density, its pupil/teacher ratio is 12 percent higher than the national average. With an education budget 33 percent lower than average, a potential factor in Alabama’s overcrowded schools could be its reduced allocation of financial resources in state education.

Check out the best home insurance companies for your home and budget.

While its lakes may be great and vast, Michigan’s schools are ninth-most crowded in the nation. Even though Michigan spent 35 percent more on education than the national average in 2017, its pupil/teacher ratio exceeds the norm by 13 percent. The case of Michigan demonstrates that spending more money on schools is not an all-encompassing solution to improving education quality — school boards have to ensure that the implementation of those funds is strategic.

Washington is eighth in the ranks for states with the most overcrowded schools in the United States. Washington stands as the median state in terms of population density, as it ranks 25th amongst all states. Despite this average statistic, its pupil/teacher ratio, which is 15 percent above the national average, indicates that schools in Washington have room for improvement when it comes to comfortable classroom sizes. Even with above-average spending on education, Washington is still riddled with overbooked classrooms and potentially overwhelmed teachers.

If your credit score is less than ideal, consider these options for homeowners insurance with bad credit.

Our second deep south state on the list, Louisiana takes the seventh spot for states with the most crowded schools. Louisiana’s education expenditures, which were 29 percent below average in 2017, might be a potential contributing factor in its 16 percent above-average pupil/teacher ratio. With a relatively average population density, ranked 23rd overall in the nation, schools in Louisiana may be affected by the relatively lower education expenditures, leading to a deficit in the number of resources available per student.

Idaho presents a fascinating case in the top ten states with the most crowded schools. Idaho has a pupil/teacher ratio that exceeds the national average by 17 percent, making it the sixth-highest in the nation. However, Idaho is one of the least densely populated states, with only about 19.5 people per square mile. As a sparsely populated state, its rate of classroom overcrowding is surprising. Likely due to its low population density, Idaho’s spending on education is the farthest below the national average compared to the other states on this list — at approximately $2 billion, Idaho spent about 80 percent less. Even with fewer students overall, Idaho’s high volume of overcrowded classrooms follows the finding that population density is not necessarily a contributing factor to school overcrowding.

All homes deserve the best rates possible. Insurify’s got you covered for mobile home insurance quotes, too.

Two is better than one: the best insurance bundles are here.

Why spend more? Get cheap home insurance quotes with Insurify.

Oregon, the second Pacific Northwest state on the list, has the fifth-most crowded schools in the country. While much less densely populated than its next-door neighbor Washington, at 40.9 people per square mile versus Washington’s 104.9, Oregon’s pupil/teacher ratio is 11 percent higher than Washington’s and exceeds the national average by 24 percent. Oregon spends approximately 9 percent less per student than average, which potentially affects classroom overcrowding. The disparity between population density and pupil/teacher ratio thus confirms the finding that school overcrowding is more likely a product of how educational environments are built, rather than the sheer number of overall students.

The flocking to Las Vegas casinos in the midst of a pandemic is not the only thing Nevada should be concerned about. Its schools are the fourth in the nation for being the most overcrowded, despite the fact that the state is relatively sparsely populated. Similar to the case of Idaho, Nevada’s spending patterns on education are remarkably lower than the national average by 61 percent, likely due to its low population density. Nevada’s schools are nevertheless cramped, with a pupil/teacher ratio that’s 28 percent above the national average.

The third state on the list, Utah, follows a similar trajectory to the established pattern of many of these top ten states with most crowded classrooms. Utah is located in the southwestern region of the United States, has a relatively low population density, and below-average state education expenditures. Even though Utah may not have been an epicenter for the novel coronavirus epidemic, its case count saw a spike in June and kept a steady increase into July, according to state government estimations. Utah better be cautious going into the fall with their decisions to reopen schools — it seems that adequate social distancing would be extra difficult in their classrooms, where the pupil/teacher ratio exceeds the national average by 32 percent.

California is somewhat of an unexpected outlier — it has the highest population density out of any other state on the list, which contradicts the pattern of sparsely-populated states having the highest pupil/teacher ratios. In this way, California actually may concede with the seemingly logical yet actually inaccurate assumption that more students naturally lead to more crowded classrooms. California spends close to the national average on each student, so the Golden State may be a case of simply having a lot of students to account for. California was praised for its handling of the coronavirus early on in the pandemic, so perhaps the state will revamp its strong public health measures come fall.

Arizona has the most crowded classrooms in the nation. Its pupil/teacher ratio is 35 percent higher than the national average, despite having a population density 87 percent below the nationwide mean. Arizona’s spending per student is one-third below the national standard. According to state officials, Arizona hospitals have been steadily approaching capacity since March. It’s clear that healthcare resources are becoming increasingly strained, and reopening schools in the fall could only serve to exacerbate the rates of COVID-19.

Learn More
Insights>States With The Most Crowded Schools