Over the past 20 years, suicide mortality has increased across the nation. However, in some states, rates are rising faster than others.

Suicide is a major health issue in the United States, and it has been on the rise throughout recent memory. Over half of Americans know someone who has died of a suicide attempt, according to Rasmussen Reports’ recent finding. With this increase, suicide has risen to the number two cause of death for young people (age 15-24) nationwide. Moreover, the annual cost from lost work and medical issues related to suicide has climbed to a staggering price of over $50 million. With 123 deaths a day, addressing this problem is an immense undertaking, but also a highly valuable one, as every prevention represents another chance at life.

While state rankings for suicide rate have remained fairly stable over time, the absolute rates have been monotonically rising. Given the magnitude of this issue, it is worth understanding where these deaths are increasing the fastest. With this in mind, the team of data scientists at Insurify, a life insurance quotes comparison site, analyzed trends in statewide suicide rates over the past two decades to see which states are seeing the fastest rise in suicide-related mortality. 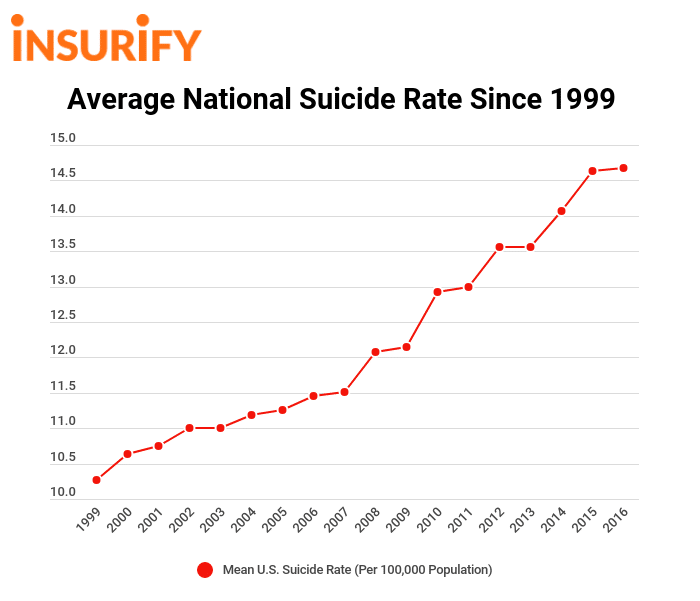 Data scientists at Insurify, a site that lets users compare Medicare plans, gathered statistics on Underlying Cause of Death Compressed Mortality from Wonder by the Center for Disease Control and Prevention (CDC). Fatality rates were obtained by examining the underlying cause of death on death certificates from 1999-2016. Mortality caused by intentional self-harm were included in the analysis, and rates were calculated out of population pools of 100,000. The data were sorted by state and year, and the average annual percent change in rate was calculated as a trend for each state. Given that this change was averaged over nearly 20 years, concentrated time periods of decline or slower or faster growth are smoothed to the mean yearly change over the entire time period.

Hawaii, the youngest of these 50 states with only 60 years of statehood, has spent at least the last 20 facing a generally increasing trend in self-harm deaths. However, it has seen one of the lowest relative increases in suicide rate nationwide since 1999 at 17.44 percent. While it’s the 10th highest state for upward trends in suicide overall during this period, in the last four years of the sample, Hawaii’s rate has more or less plateaued and slightly declined from its peak rate of 12.7 suicides per 100,000 in 2010.

Check out the best and worst sites to compare life insurance quotes.

In contrast to Hawaii, South Carolina has one of the higher relative increases in suicide rate since 1999, rising over 67 percent from 9.6 to 16.1. South Carolina’s upward trend has seen a steadier increase than others, as the state did not witness the same acceleration in growth that others did following 2007. This upward trend has been so steady, in fact, that the rate in 2016, the most recent year reported, is the highest in the state’s record.

Utah faces a high rate of suicide that is steadily worsening. In 2016, Utah saw a suicide rate of nearly 20 deaths per 100,000 population. The mortality rate began at 18 percent over the national average at 12.2 in 1999, and ballooned to 32 percent greater than the national average at 19.4 in 2016. This places the state within the top 10 nationwide for rate of fatalities from suicide.

Wyoming, the country’s smallest state by population, also has one of the highest suicide rates in the United States. With a rate of 21.6 deaths per 100,000, the state was third in the nation for self-harm fatalities in 2016. That said, despite these dismaying statistics, 21.6 is a far cry from Wyoming’s peak rate at 26.1, having fallen 17.25 percent since its high in 2012.

Find the best life insurance companies for your future policy.

Maine, while a fast-growing state at number five on this list, is still not a national hotspot for fatalities by suicide. The 2016 suicide rate, 14.6, is only 31.53 percent higher than its rate of 11.1 at the end of the millennium. This increase, though smaller than most others on this top 10 list, is still tragic as it represents an increase in the loss of human life to suicide of almost a third.

Rhode Island, one of the oldest and smallest states in the country, has one of the lowest suicide rates in modern America at 7.9. This is roughly half the national average of 14.7. However, it has seen some of the steepest growth its suicide rate since 1999 when it began at only 4.9 fatalities in a population of 100,000.

North Dakota has seen a sharp rise in its suicide rate since the end of the 20 th century, increasing 83.85 percent in that time. The state went from a suicide rate comfortably below the national average in 1999 (8.5 compared to 10.3) to one that has just surpassed it in 2016 (15.6 compared to 14.7). Though the mid-northern states are all increasing faster than average, North Dakota leads all of its neighbors in the growth of self-harm mortality.

New Hampshire is the first state on this ranking whose suicide rate has more than doubled since the end of the millennium. However, despite this grim trend, the state still remains in the bottom half of states for suicide mortality nationwide. However, if the speed of this growth continues, New Hampshire will soon break into the top half of states for suicide. This is a grim prospect for the state that has always strived to live free or die.

Vermont is the only state whose suicide rate has more than tripled and for which the average annual percent increase breaks three percent. Its initial rate of 4.8 was the lowest nationwide at the time, and the 2016 rate of 15.4 is the highest in the state’s history. Between the upward trend in suicide and the recent opioid epidemic—phenomena that may not be unrelated —facing Vermont and New Hampshire, these New England states are tragically losing many young residents before their time.

These are difficult statistics to stomach, let alone with which to meaningfully engage. Even though the CDC ranks suicide as the 10th leading cause of death among Americans, it is still underfunded in comparison to proportionally similar killers, such as alcoholism. Better understanding the trends and the regional variation behind these tragedies will only help in overcoming them. That being said, this can only happen by confronting the stigma surrounding mental health and suicide, and actively committing to finding and funding solutions.

Despite these grim realities, conversations about mental health have been increasingly entering the wider public conversation, and numerous resources exist to confront this problem. Crisis services and mental health care provide support for both acute and long-term mental health needs. Moreover, institutions such as the American Foundation for Suicide Prevention and SAVE (Suicide Awareness Voices of Education) are committed to combating suicide and responding to its challenges.

If you have been struggling with hopelessness or thoughts of suicide, support can be reached at the toll-free National Suicide Prevention Lifeline at +1-800-273-TALK (veterans press 1) 24 hours a day.