These cities have adapted exceptionally to encourage voting in the historic 2020 general election. 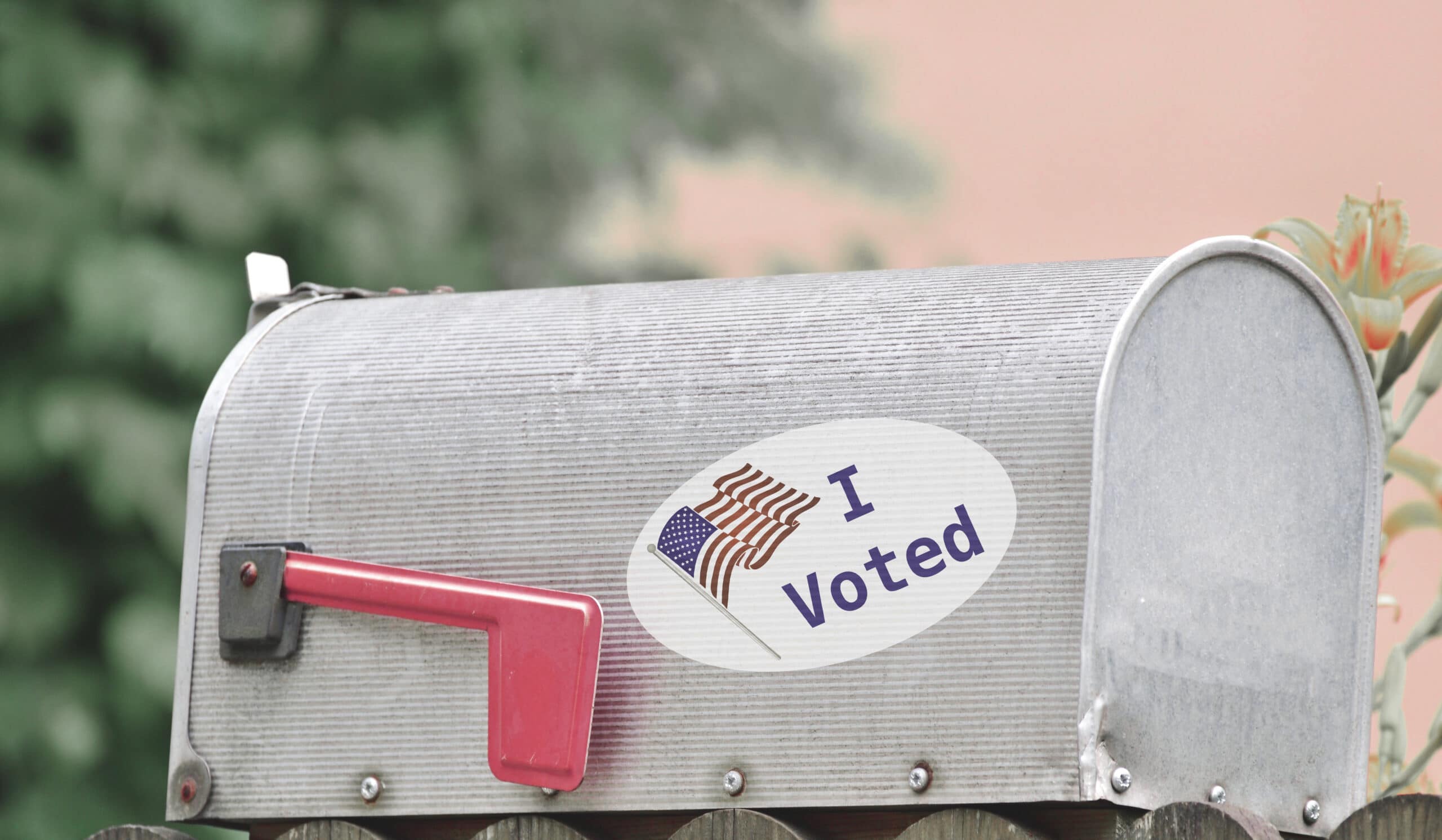 To say that 2020 has been a consequential year is the understatement of the 21st century. The global pandemic, civil unrest, and growing effects of climate change are just a few of the major developments that the nation has experienced over the past year. 2020 is also host to one of the most highly-anticipated elections in recent history, and the events of these last nine months have only intensified the fervor of Americans to get out and vote.

Earlier this year, it was uncertain whether the coronavirus pandemic and subsequent social distancing regulations would hinder voter turnout in November. More and more eligible voters who are able to avoid going to polling locations in person on November 4th have been taking advantage of alternative voting options, such as early voting and mail-in ballots. In fact, rates of early voting this year are unprecedented: according to the Pew Research Center, mail-in voting this year has surpassed that of the 2016 election two times over. In 37 states (and Washington D.C., mail-in ballots have comprised just over 50 percent of this year’s votes. Additionally, the Washington Post reported that as of October 20th, 2020, early voting numbers across the nation have already exceeded those from 2016 by 10 percent.

Elections are foundational to American democracy, and it’s clear that voters are fighting to make sure their voices are heard in these unpredictable times. However, factors that contribute to voter turnout and encourage civic engagement vary across the nation. To understand these regional differences, the data science team at Insurify crunched the numbers and identified the most voter-friendly cities across the country. 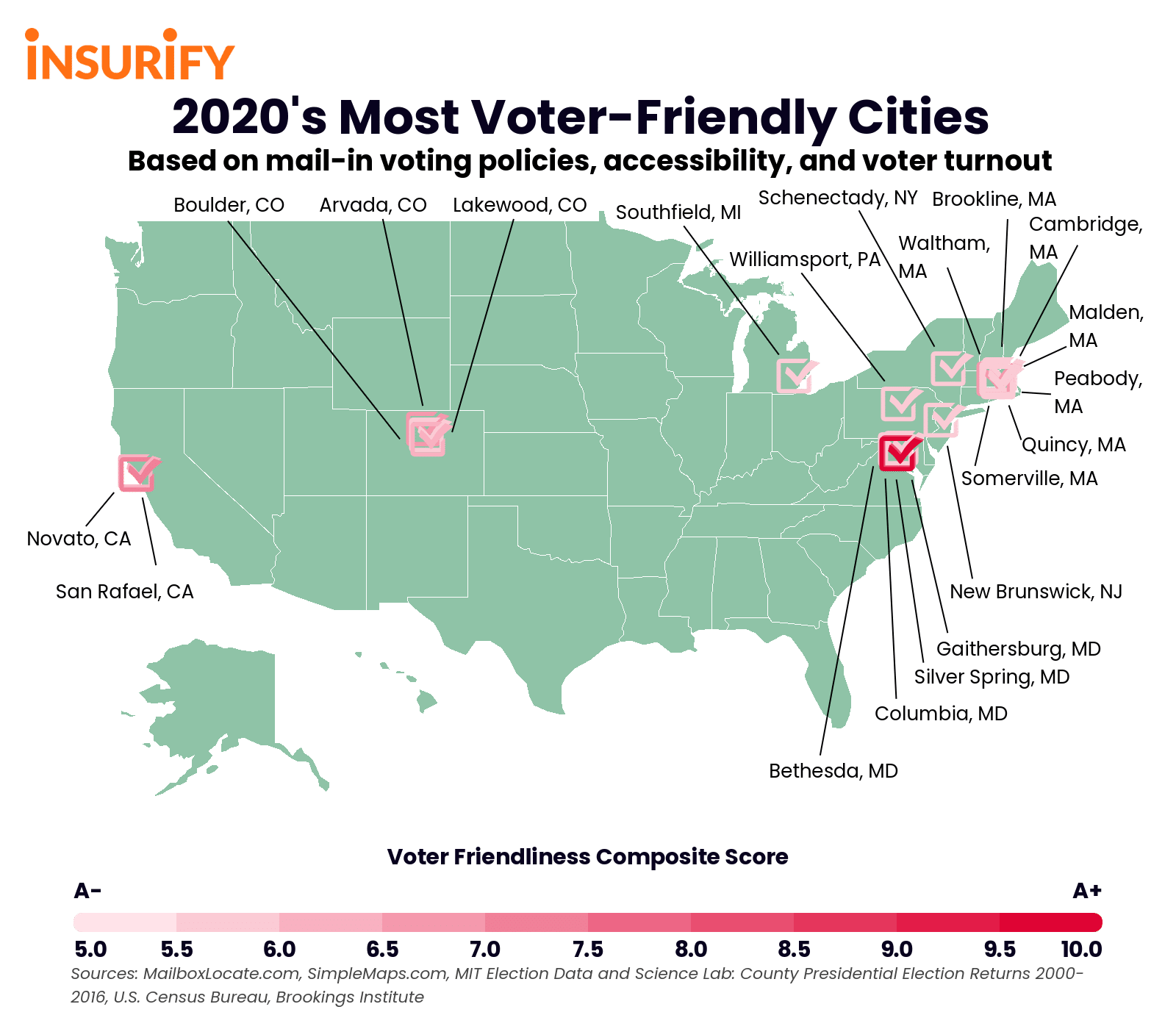 The data science team at Insurify, a site to compare home insurance rates, examined various public data sources to identify the most voter-friendly cities for the 2020 Election. Cities across the United States were evaluated across three metrics: USPS service availability (the number of USPS locations per capita), historical voter turnout (the county-level share of residents who voted in the 2016 Presidential Election), and mail-in voting infrastructure (the Brookings Institute’s 2020 State Mail-in Voting Scores).

Statistics on the number of USPS services (including both drop boxes and postal offices) were gathered from MailboxLocate.com, which tracks geographic data of USPS locations across the United States. To identify USPS services per capita, the number of USPS locations per city was measured against the city’s total population, provided by data from SimpleMaps.com. Previous voter turnout statistics were derived from the County Presidential Election Returns, 2000-2016 dataset provided by MIT Election Data and Science Lab. The total number of votes cast per county in the 2016 Presidential Election was measured over U.S. Census Bureau county population data to calculate voter turnout. State mail-in voting scores were provided by the Brookings Institute’s Pandemic Election Preparedness Project. States were ranked on a scale of 0-22 based on how effectively states implemented the following standards for the upcoming election: universal vote-by-mail, requesting an application for absentee voting, completing a mail ballot, submitting a mail ballot, channels for submission, and special scoring (such as ID and witness requirements).

In 2020, the states that are home to the most voter-friendly cities are Massachusetts, Maryland, Colorado, and California. Bethesda, Maryland has the highest voter friendliness score of all U.S. cities, meaning that according to USPS service availability, historical voter turnout, and mail-in voting infrastructure, voting is made much easier.

Most Voter-Friendly Cities in 2020

Only the best for your nest. Our experts weigh in on the best homeowners insurance Arizona so Copper State residents can save on their premiums.

Golden State homeowners, look no further to find your home-sweet-home (-owners insurance policy). The cheapest home insurance in California is just a click away.

Got questions about insuring your home in North Carolina? Insurify wrote the guide to homeowners insurance NC so that Tarheel State residents can get the best policy for the best price, guaranteed.

Get big savings in the state of the Big Apple: here’s the cheapest homeowners insurance NY.

Find a policy that’s just peachy! Our experts gathered the data on getting the best homeowners insurance in GA.

Protecting your Pennsylvania home doesn’t need to break the bank – Insurify has the guide to getting cheap homeowners insurance PA.

The sun shines brightest on an insured home, so Insurify’s got Sunshine State homeowners covered when it comes to finding cheap Florida home insurance.