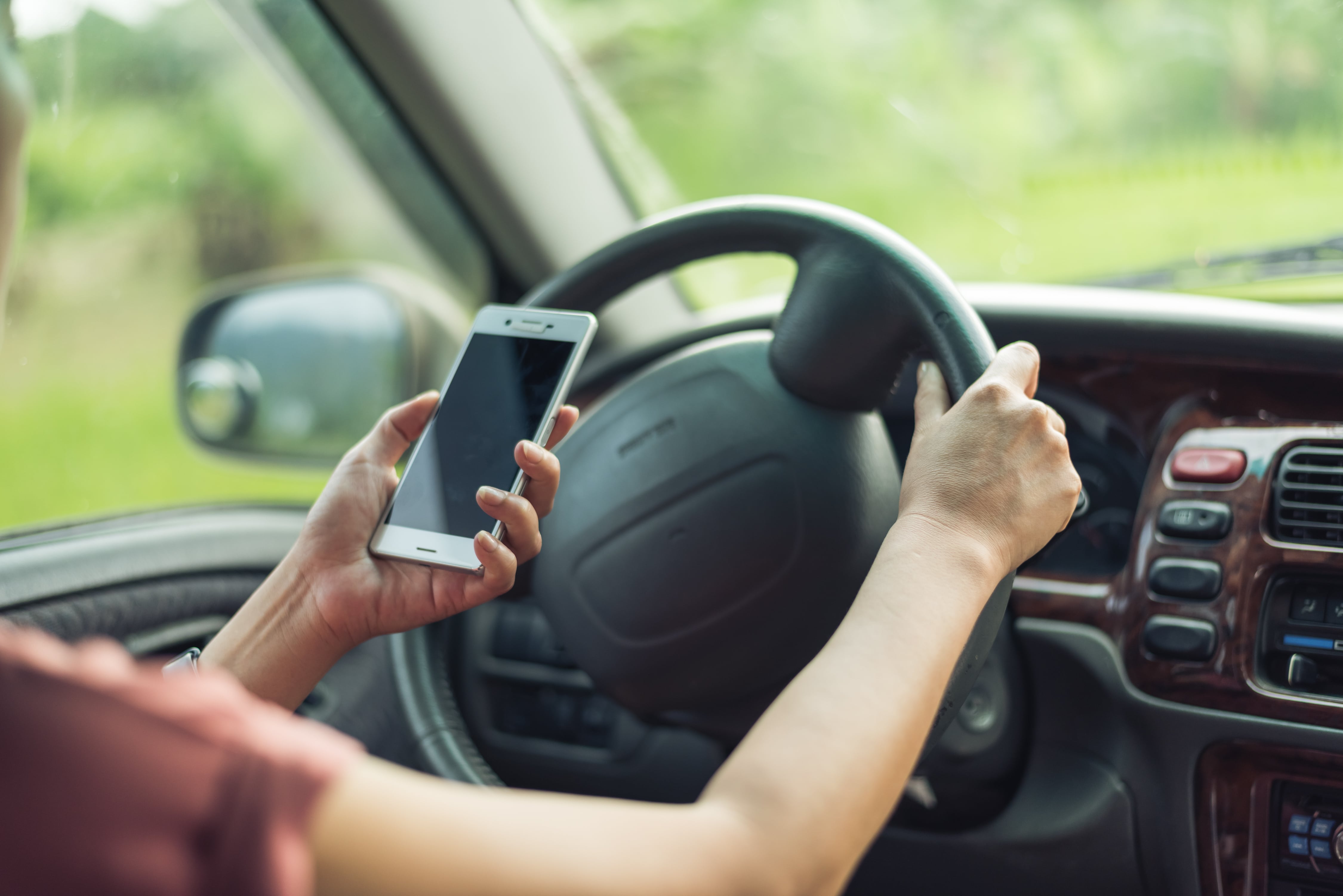 Take a random sample of drivers on the road today, and many will admit to occasionally being irresponsible. Maybe they’ve downed an entire fast-food haul on the freeway or dug around the center console for an aux cord while navigating a tricky intersection. Fortunately, reckless driving as a legal infraction is a far less common, albeit more sinister offense. These violations occur in situations where the driver is willfully acting dangerously in spite of the risks they’re imposing on both themselves and others.

Reckless driving carries serious consequences including injury, property damage, criminal charges, and a spike in insurance prices. While any vehicle can be misused, it turns out that some car models tend to attract more reckless drivers than others. With this in mind, the research and data science team at Insurify combed through the data to discover what cars have the highest rate of reckless driving.

Are they the ones you’re expecting? 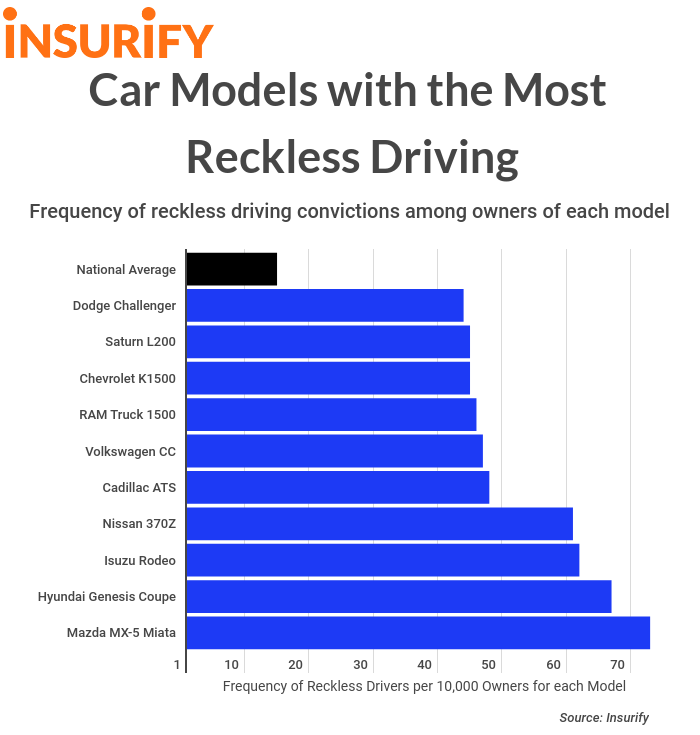 Car Models with the Most Reckless Driving

3. Isuzu Rodeo - Proportion of Isuzu Rodeos with a reckless driving infraction: 62 in 10,000

6. Cadillac ATS - Proportion of Cadillac ATSs with a reckless driving infraction: 48 in 10,000

To get to the bottom of which car models are driven by the most reckless drivers, the data science and research team at Insurify, a platform that lets users compare auto insurance quotes, consulted their database of 1.9 million motorists. When a driver applies for an insurance policy, they must disclose personal, vehicle, and driver behavior information — including any prior reckless driving convictions — in order to receive quotes. Using these driving records, analysts determined which automotive models are associated with the highest rate of reckless driving since 2010. Additional data on the vehicles’ top speeds, horsepower, and last production year are from Cars.com, Edmunds, and Carscoops.

Say what you will about stereotypes, but the first car of our top 10 list is the infamous Dodge Challenger muscle car. With a top speed of 168 mph — a maximum speed that exceeds that of any other vehicle on this ranking — it may come as no surprise that reckless Dodge Challenger drivers find themselves on the wrong side of the law more often than your average car owner.

Could The Zebra insurance quotes be your solution to car insurance comparison shopping? Learn more here.

In circumstances where you do not have a license, there are still options for car insurance without a license.

In a direct reversal from the sports car occupying the number 1o slot, our ninth most reckless vehicle is the Saturn L200. With the lowest horsepower of the top 10, the L200 serves as a good reminder that it doesn’t require a sports car to drive with wanton disregard for the safety of people and property. Excessive speed, public road “stunts”, road rage, and a score of other dangerous traffic violations can all earn the slap of a reckless driving charge.

As our first truck on the list, the RAM 1500 may conjure images of off-roading and drivers who think they own the road. While these stereotypes are false distortions of reality, they do contain a grain of truth. In the case of the RAM 1500, its drivers are convicted of reckless driving at a rate over three times the average for a randomly selected car model. Perhaps this figure should give them pause the next time they get the impulse to cut someone off in traffic.

Could your next best car insurance policy be waiting for you after evaulating Gabi insurance reviews? Here’s our comprehensive guide.

Even with driving violations, drivers can still find good options for car insurance for a bad driving record.

Did you know that for large sections of the German autobahn, speed is completely unrestricted? It’s true! Perhaps you can take the car out of Germany, but you can’t take the German out of the Volkswagen CC — its American drivers love to drive it quickly and recklessly. It’s too bad that speed is very much restricted in the United States and that U.S. drivers don’t have to pass the strict licensing test that German drivers do to operate a vehicle. In combination, these speed limits and permissive driving tests are a recipe for reckless driving infractions.

One could reasonably expect that owners of a luxury vehicle would drive all the more cautiously to protect such a valuable asset. This is not the case with the Cadillac ATS. Despite earning the highest possible safety rating from the National Highway Traffic Safety Administration, the ATS is the sixth highest-offending model in terms of reckless driving. Maybe all of those extra safety features embolden ATS owners to drive that little bit more negligently than the rest of us.

Bundling auto and home insurance is a highly effective way to save on total insurance costs.

After a speeding ticket or driving violation you should consider options for high risk auto insurance.

For those still in the renter economy, you can save considerably by bundling car and renters insurance.

Kicking off our top five models with the most reckless driving is the Chevrolet K1500 with a rate of offense that is more than 250 percent greater than the average vehicle in America. The K1500 is the oldest vehicle on the ranking, but even 20 years after Chevrolet discontinued its production, it’s still on the roads and pushing the limits of the law.

The vehicle with the fourth most reckless drivers is AutoGuide’s 10th best Nissan sports car of all time, the Nissan 370Z. That being said, not all of the 370Z’s presence in the spotlight is so positive. According to recent analysis by Insurify, the model also ranks within the top 25 cars for speeding and the top 20 for hit and run violations.

Coming in at number three is our only SUV of the list. The Isuzu Rodeo may be an older model with the lowest top speed of any vehicle in this ranking, but that doesn’t mean its drivers can’t behave recklessly behind the wheel. When it comes to reckless behaviors such as speeding in a school zone or passing on a hill, it doesn’t matter what machinery a car is packing under the hood.

The Hyundai Genesis Coupe is the second most recklessly driven model in the country, and for better or worse, it truly earns that title. Owners of the Genesis Coupe have the 23rd highest at-fault accident rate and the 18th highest rate of DUI. What’s more, they are the 4th worst speeders of any vehicle owners. With all of these heedless traffic convictions on their record, Hyundai Genesis Coupe drivers certainly seem to have a type.

Closing out the ranking of cars with the most reckless drivers is the Mazda MX-5 Miata, making both of the top two models sports car coupes. With a 2019 MSRP of $26,650, the MX-5 Miata is a sports car with a more affordable price tag than most of its counterparts. Perhaps this lower dollar investment engenders more reckless behavior behind the wheel, but, regardless, the Mazda MX-5 Miata has more reckless drivers than any other models in the nation.

Learn More
Insights>Car Models With The Most Reckless Driving