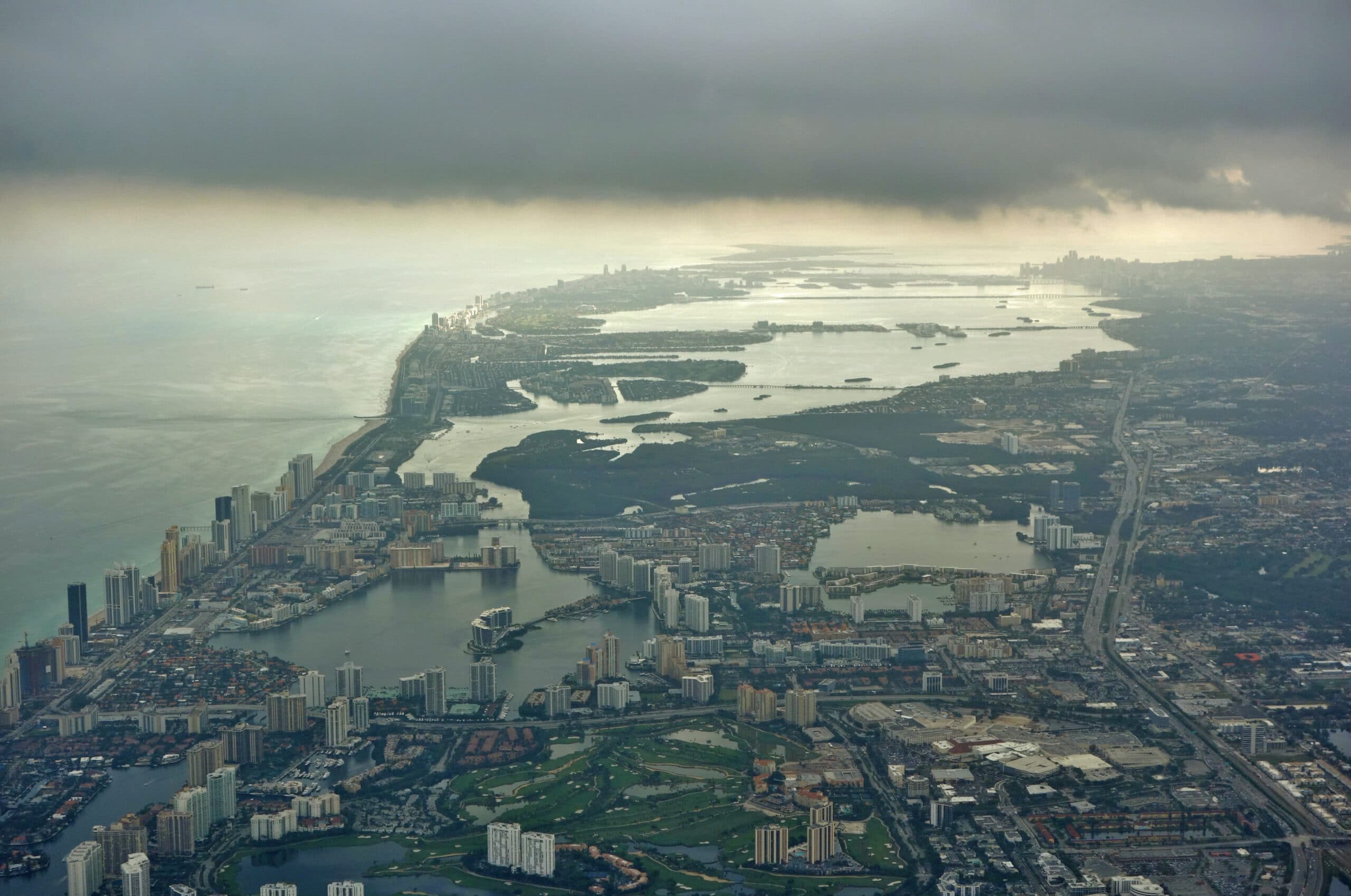 As the effects of climate change grow increasingly prevalent, they become harder and harder to ignore, especially when making a significant investment like buying a house. The National Resource Defense Council (NDRC) reported in 2019 that rising sea levels will be a significant driving force in displacing populations globally. In fact, the NDRC estimates that between 4.2 and 13.1 million Americans could be forced to move due to climate change by the end of the twenty-first century; countless miles of land in the United States will become unlivable within the next 80 years.

Individuals on the market for buying a house in the United States have reported varying levels of concern about how climate change may affect where they choose to live. A recent report from the New York Times detailed a decline in property sales in high-risk areas in Florida following 2013, when the aftermath of Hurricane Sandy left many potential buyers reeling after witnessing the tangible effects of climate change. However, the housing market landscape in at-risk areas varies throughout the country. In some cities, home sales are virtually unimpeded by the impending possibility of sea level rise. According to a November 2020 report by Politico, lenders have continued to issue mortgages in these at-risk neighborhoods without hesitation, indicating that movement into these regions is still active. The subsidization of these risky properties is cause for concern for climate scientists and economists alike, because the overvaluation of homes in these risky areas could lead to the devaluation of property, potentially prompting a major housing crisis. Many economic and regional planning experts have called on the government to enact stricter regulations that account for the effects of climate change in higher-risk areas in order to prevent a widespread housing crisis and bolster protection for vulnerable populations.

We are past the tipping point when it comes to reckoning with climate change. Sea level rise, flood, and wildfires are all current realities across the country, and will only continue to shape the future of where we build our communities. To understand how the effects of climate change may impact real estate markets in the United States, the research team at Insurify consulted data from the University of Notre Dame to identify cities whose housing markets are most at risk for climate change. 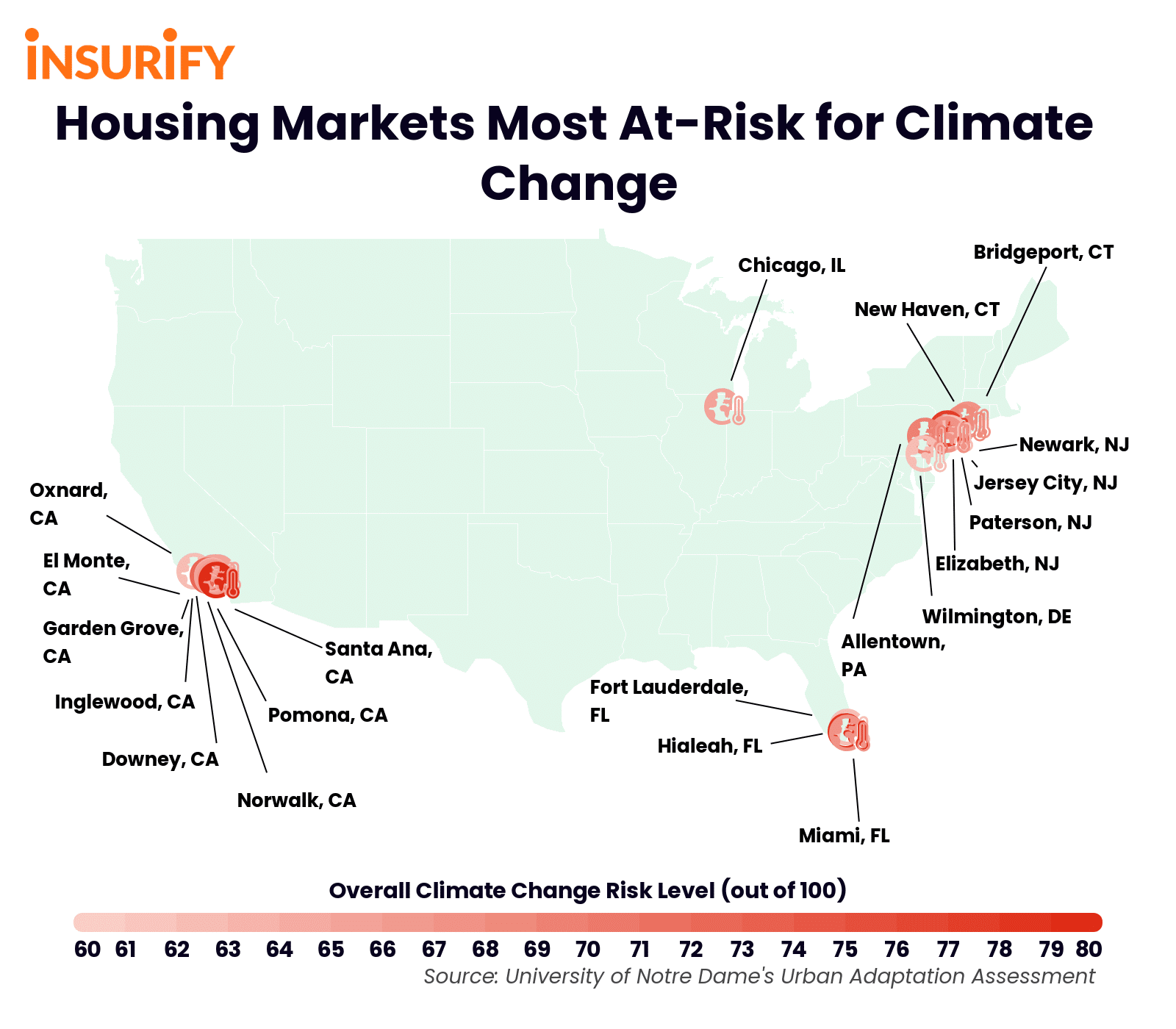 To identify the housing markets most susceptible to the effects of climate change, the data science team at Insurify, a site to compare home insurance quotes, referred to two publicly available data sources. Overall climate change risk level for each city was derived from the University of Notre Dame’s Urban Adaptation Assessment, launched by the Notre Dame Global Adaptation Initiative in 2018. The Urban Adaptation Assessment includes data and risk calculations for climate change hazards ( heat, cold, floods, droughts, and sea level rise ) and the economic, social, and governance measures in place to combat them in 280 U.S. cities across 48 states. The Overall Climate Change Risk score, which is the basis for the rankings’ order, was calculated by the UAA by taking the average of each city’s scores of each hazard.

The second source used by Insurify’s data scientists is Redfin’s Housing Market Data. Redfin, a national real estate brokerage, collects real estate market metrics on a monthly basis across multiple geographic levels in the United States. The relative growth of median sale prices of homes and of the number of homes sold year-over-year for each city on the list are taken from Redfin’s most recent year-over-year estimates as of October 2020. For some noted cities on the list, the growth of median sale price and of the number of homes sold year-over-year were taken from that city’s greater metropolitan area.

Where is the biggest risk for climate change affecting real estate?

Lone Star State residents don’t need to break the bank to protect their homes. Insurify’s guide walks you through finding cheap homeowners insurance Texas so you can save on your policy today!

Find the best homeowners insurance Arizona with Insurify, so your Grand Canyon State home is protected at the best price.

Tar Heel State residents can breathe easy knowing that finding the best homeowners insurance NC is just a click away with Insurify.

Insurify can help you get into the Empire State of mind by providing the best quotes for home insurance New York.

It’s peachy! The best homeowners insurance in GA is just a click away with Insurify.

How do I find the cheapest homeowners insurance in PA? Keystone State residents, Insurify’s got you covered. Find your perfect policy in just a click!

Getting the cheapest homeowners insurance in Florida is made easy with Insurify, so Sunshine State homeowners can protect their homes at the right cost.

If you have any questions or comments about this article, or would like to request the data, please contact insights@insurify.com.

Learn More
Insights>Housing Markets Most At Risk For Climate Change