Happy, healthy hearts are on the rise across the country. Which states have seen the steepest drops in fatal heart disease during the new millennium?

As the number one cause of death in the United States, heart disease poses a serious threat to the health and well-being of Americans. The term “heart disease” encompasses a range of cardiac ailments affecting the heart’s ability to circulate blood. With risk factors including smoking, inactivity, poor diet, high body weight, poor blood pressure, high cholesterol, and unhealthy blood sugar, heart disease is incredibly prevalent. In fact, according to the American Heart Association (AHA), an American experiences a heart attack, on average, every 40 seconds and the annual cost is approximately $200 billion.

However, despite persisting as a major national health challenge, heart disease has been trending downward in recent years. The AHA reports a decline in death rate of over a third in the ten year period between 2005-2015. While this decreasing fatality is encouraging, it is not uniform, as some states have seen considerably faster progress in this area than others. Seeking insight on this regional variation, the data scientists at Insurify took a state by state look at the trends in mortality since 1999. These are the top 10 states with the steepest drop in heart disease. 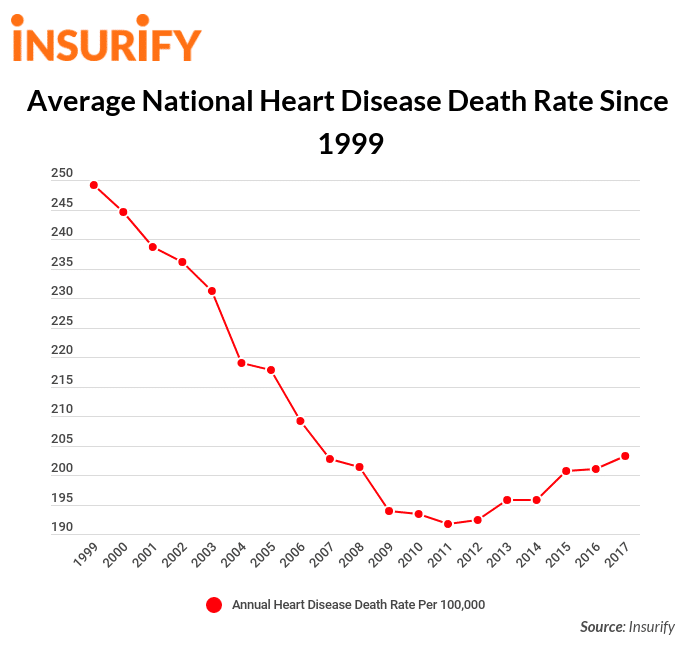 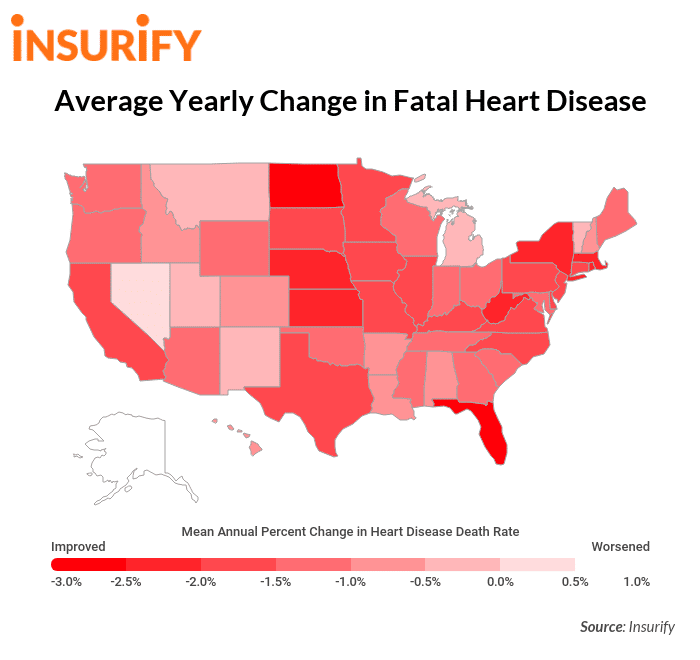 To determine the states with the greatest improvement in heart disease fatality rates, the data scientists at Insurify, a site that lets users compare Medicare Advantage plans, gathered data on annual heart disease deaths by state since 1999. The data originated from CDC Wonder Underlying Cause of Death Compressed Mortality. Cause of death was determined through death certificates, and cardiac maladies including chronic rheumatic, hypertensive, ischaemic, pulmonary, and other forms of heart disease were included in this analysis. Death rate was determined by calculating the number of fatal heart disease cases per population of 100,000, with unreliable values omitted from this report. The average yearly percent change in heart disease rate was determined to find the overall trend for each state within the 18-year time period. The national trend was determined from a yearly average of the death rates of all 50 states. Absolute change in rate was calculated by dividing the 2017 death rate by the 1999 death rate for each state. The 2017 ranking was ordered such that the state with the highest rate of death was #1 and the state with the lowest rate was #50.

Number 10 on our list is South Dakota. The Mount Rushmore State is well known for rugged wilderness and strong citizens who get things done. This certainly seems to be the case with heart disease. South Dakota has seen an almost 22 percent decrease in statewide fatality since 1999. In fact, while most states began to see a rise in their rate of fatal heart disease in the 2010s, South Dakota has managed to more or less maintain the lower levels reached at the end of the prior decade during this time.

You’re just seconds away from a quick estimated quote with our new car insurance estimator.

While it is making great strides in heart disease prevention as the number nine state on this ranking, Pennsylvania still has a long way to go. It ranked seventh in the nation for high rates of heart disease death in 2017. However, its progress is noticeable—it comes in eighth nationwide for the largest decrease in fatal heart disease. Over the 18-year period, Pennsylvania’s death rate dropped by over a quarter.

Kansans, perennially tired of only being associated with the Wizard of Oz, now have something new about which they can boast. Coming in at number eight, Kansas has seen one of the fastest improvements in heart disease in the country. They have also witnessed the 13th greatest overall reduction in heart disease in the past two decades at almost 24 percent down from its initial rate.

What are the differences between term vs whole life insurance? Find answers here.

Cheap car insurance rates are available today – how much could you be saving?

New York is one of the few states in the country that enjoyed a near-exclusive decline in heart disease mortality rate since the start of the 21st century. With no spikes and a milder leveling-off at the end of the time period than most other states on this list, New York’s death rate has dropped approximately 2.45 percent year-over-year as it continues to tackle one of the largest modern public health issues.

Rhode Island has one of the most unique progressions in fatal heart disease rate of any state in this ranking. While most states began to trend downward immediately, Rhode Island’s fatality rate held fairly stable until a dramatic decrease from 2003-2010. In the years since, the incidence of heart disease mortality has flattened out once again, for an overall trend of -2.57 percent annually.

For drivers in their teens, explore our options for best car insurance for 18 year olds.

The best life insurance can be hard to find. These sites are here to take care of that.

Massachusetts, the state where the pursuit of American freedom officially began, has much to be proud by way of protecting American lives even today. The modern enemy is no longer redcoats, however, but heart disease. The Bay State is fourth in the nation for overall decline in the incidence of heart disease death with a drop of over 28 percent. Additionally, its rate of fatal heart disease, which used to exceed countrywide levels, is now comfortably below the national average.

Heart disease is one of the largest killers of Americans, and Nebraska is no exception. According to Nebraska Medicine, two-thirds of Nebraskans are overweight or obese, two-thirds have at least two risk factors for heart disease, and this affliction is the top killer of residents who are 55 years of age or older statewide. That said, the rate of these fatalities had been steadily dropping at around 2.65 percent a year over the 18-year time period, and the current rate of heart disease mortality is below the national average. Combatting heart disease is a long, labor-intensive endeavor, but Nebraska is doing well in fighting the good fight.

Florida has one of the highest annual rates of heart disease death on this top 10 ranking at the 14th highest in the country. However, this rate trended downward at a pace of almost three percent annually and was reduced by nearly 30 percent over two decades. This fatality rate would be even lower had Florida’s decrease not begun to plateau before the end of the 2010s, ahead of most other states.

North Dakota represents a model state in the fight against heart disease mortality in America. It is the only state to have witnessed an annual decrease in heart disease death rate of over three percent, as well as the only one with an overall decline of over a third. This remarkable drop has carried the state from a rate of fatal heart disease that exceeded the national average in 1999 to one well beneath it in 2017. North Dakota’s exceptional downturn has rendered it the state with the sixth lowest heart disease fatality rate nationwide.

Learn More
Insights>States With The Fastest Decline In Heart Disease