Hybrid and electric vehicles are becoming increasingly ubiquitous. Which states have the greenest drivers this year? 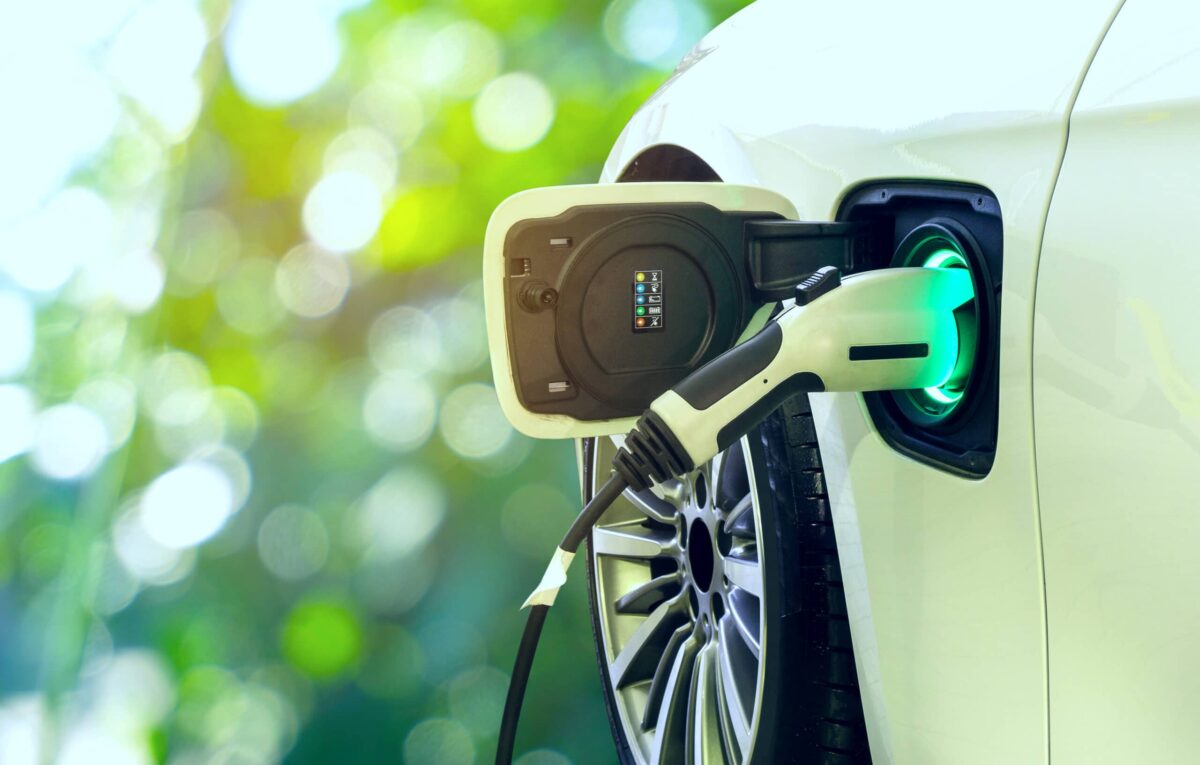 In recent years, improvements to hybrid and electric technology have ushered more and more eco-friendly cars onto the market. From Chevy to Toyota and Audi to Tesla, nearly every well-known car manufacturer has released either a hybrid-electric or a purely electric vehicle to meet a variety of preferences. In fact, in 2020, there seems to be an eco-friendly car to satisfy every driver’s taste and budget.

Many drive hybrid or electric vehicles for their green impact. While electric vehicles require no gas to run, many hybrid-electric vehicles are nearly twice as fuel-efficient as standard cars. Reduced fossil fuel consumption by hybrid-electric vehicles leads to a significant decrease in greenhouse gas emissions per mile driven. Given that every gallon of gasoline burned releases 19.60 pounds of carbon dioxide into the atmosphere, according to the U.S. Energy Information Administration, fuel efficiency significantly reduces carbon emissions caused by driving. Take, for example, a 15mpg difference in fuel efficiency. If the average American drives 13,176 miles per year, this difference saves nearly 200 gallons of gas, translating to nearly 4,000 fewer pounds of carbon dioxide emissions.

Others choose a more fuel-efficient vehicle to cut costs. While many hybrid and electric cars tend to cost more upfront, with every mile driven, more money is saved on fuel compared to a less efficient vehicle. Additionally, many states offer economic incentives to electric and zero-emission vehicle owners, from particular tax exemptions to rebates worth thousands of dollars.

Car ownership by vehicle type varies significantly from state to state. Curious to determine the states with the highest share of hybrid and electric vehicle ownership, the data scientists at Insurify, an auto insurance quotes comparison website, referred to their database. 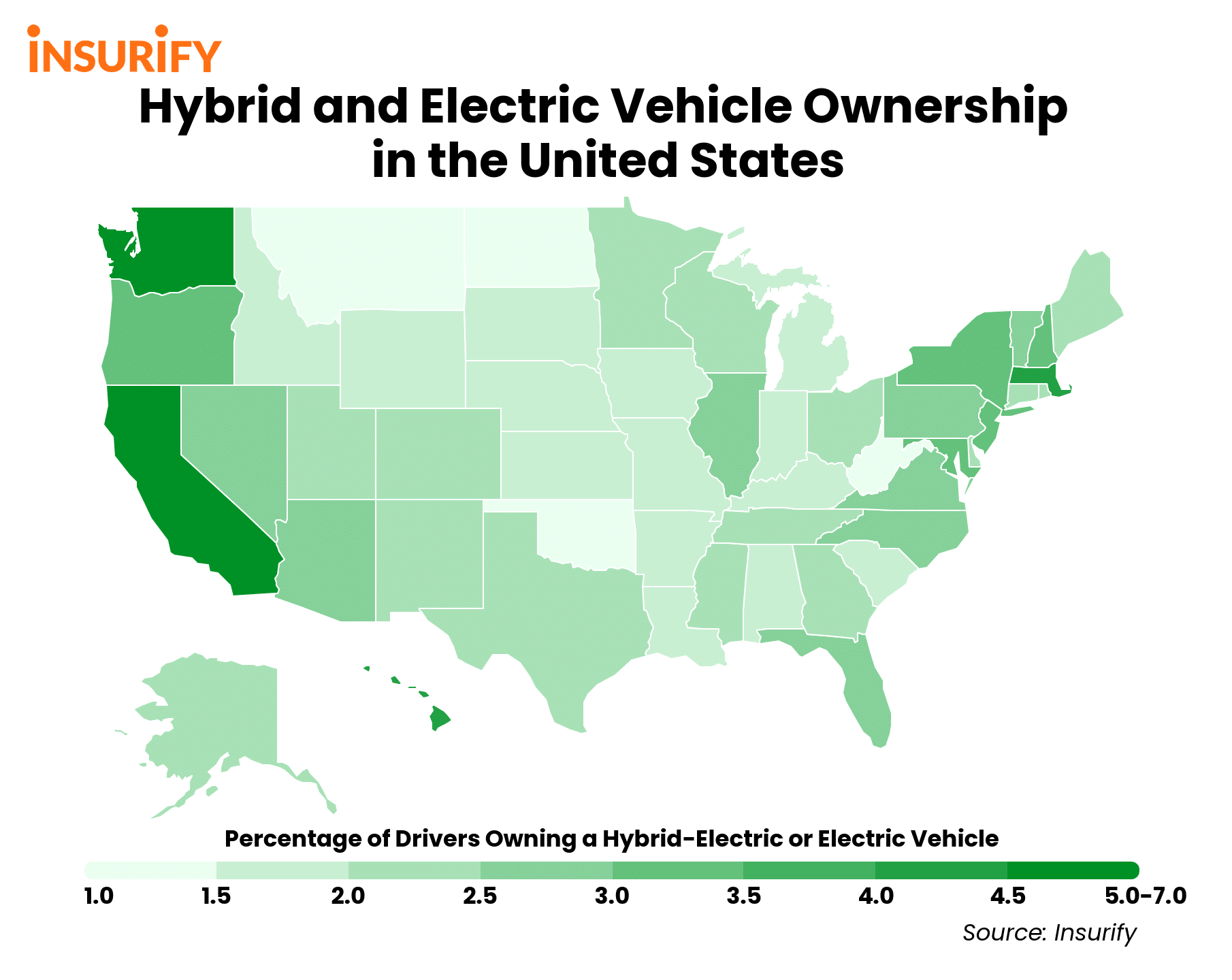 To determine the states with the highest share of electric and hybrid vehicles, the data science team at Insurify, a website to compare auto insurance quotes, referred to their database of over 2 million car insurance applications. When applying to compare car insurance quotes, drivers enter information such as their vehicle make and model and the state that they call home. The number of hybrid and electric vehicles in each state was divided by the total number of cars to determine the proportion of hybrid and electric vehicles in each state. From this, the ten states with the highest rates of green car ownership were selected.

The most recent data (2018) on the number of miles driven in each state was procured from the Bureau of Transportation Statistics. The latest gas price statistics were obtained on July 31, 2020, from AAA.

States with the Most Hybrid and Electric Vehicles

States with the Most Hybrid and Electric Vehicles

Rounding out the top ten states this year, Illinois has a higher-than-average proportion of hybrid and electric vehicle owners. Insurify ranked the Prairie State tenth in the nation for hybrid and electric vehicles last year as well. Illinois is also the only state on this list located in the midwest; the rest of the states in this ranking are located on both coasts. It may be surprising to learn that some recent legislation in Illinois is not all that supportive of electric vehicles on its roads. Specifically, starting January 1, 2020, the state increased annual registration fees for all EV owners by $100 to make up for lost tax revenue from gas sales (the gas tax in Illinois is one of the highest in the country). Whereas owners of gas-guzzling cars pay only $148 in annual registration fees, EV owners must now pay $248.

Wondering how to affordably insure your car in the Beehive State? Cheap auto insurance Utah drivers can rely on is only a few clicks away.

The first East Coast state to make the list (and certainly not the last), New Jersey is home to the ninth-highest proportion of hybrid and electric vehicle owners in the country. New Jersey’s gas prices are a cent lower than the national average, and also are lower than those of many other states on this list. Therefore, gas prices may not be the sole motivation for driving greener vehicles in the Garden State. Rather, New Jersey has incentives in place to increase both electric vehicle sales and use, including exempting zero-emissions vehicles from state sales and use tax as well as a plug-in electric vehicle rebate program.

Oregon has the eighth-highest proportion of hybrid and electric vehicle owners in the country, an increase from last year when the state ranked ninth in the nation. Gas prices are pretty steep in Oregon — as of July, regular gasoline is priced at $2.66 per gallon, cheaper than only 3 other states. Ucontributes to the appeal of fuel-efficient vehicles, but it’s not the only factor. In fact, Oregon’s state legislature is quite electric vehicle-friendly, and, like other states on this list, offers drivers a rebate on their purchase or lease of a plug-in electric vehicle of up to $2,500, or up to $5,000 for low- or moderate-income households.

Finding cheap car insurance in Texas is easy, if you know where to look.

If you live in the Palmetto State, look no further. We’ve got the scoop on getting cheap auto insurance SC drivers can’t find anywhere else.

Michigan has some of the most expensive car insurance rates in the country. Our experts weigh in on cheap insurance Michigan drivers will love.

Our experts give the low-down on finding cheap car insurance Florida drivers can count on.

Rounding out the top 5, New York has moved up in the rankings since last year. In fact, the Empire state ranked in 7th place last year with a rate of 3.08 percent of drivers owning a hybrid or electric vehicle — clearly, the urge to go green has only grown stronger. While this percentage change may seem minimal, keep in mind that New York is home to over 11 million drivers. With gas prices only a few cents higher than the national average, those with a monetary incentive to purchase an electric vehicle may rely instead on the New York State Energy Research and Development Authority’s rebates program, for up to $2,000 for the purchase or lease of a new eligible plug-in electric vehicle.

With hybrid and electric car ownership at 4.27 percent, Hawaii has the fourth-highest share of eco-friendly vehicles in the nation. As of July this year, Hawaii’s gas prices are the highest in the nation. Historically, they’ve been comparatively steep, which may be a motivating factor in fuel-efficient vehicle purchases in the state. The Aloha State also aims to meet a zero-emissions economy by 2045. Part of the state’s strategy involves reducing fossil fuel consumption with economic incentives to electric vehicle owners, including metered parking fee exemptions and rebates for the installation of electric vehicle charging systems.

Massachusetts has the third-highest proportion of hybrid and electric vehicle owners in the country. Despite the fact that the Bay State’s gas prices are actually below-average and state-sponsored economic incentives for electric vehicle ownership are much less generous than those of many other states on this list, drivers in this state nevertheless tend to gravitate toward hybrid and electric vehicles. Perhaps it’s a testament to their dedication to a more sustainable lifestyle; Massachusetts has long been considered one of the most progressive states in the country.

California is the state with the highest proportion of hybrid and electric vehicles in the nation. This is likely due in part to the fact that drivers in this state consistently purchase the most environmentally-conscious automobiles compared to any other state each year. Although Californians drive near-average distances (35.8 miles per day, compared to the national average of 36.1), they pay more per mile in gas prices, which are the second-highest in the nation. High fuel prices aren’t the only incentive to purchase a fuel-efficient vehicle in California; in order to lower carbon emissions and improve air quality, the Golden State offers considerable economic incentives to drivers who purchase or lease plug-in hybrid and zero-emission vehicles, including rebates of up to $4,500 for some kinds of green cars.