Mindfulness of pedestrians should be a no-brainer when behind the wheel, but this isn’t the case for all drivers. Which cities fare the worst with respect to pedestrian safety? 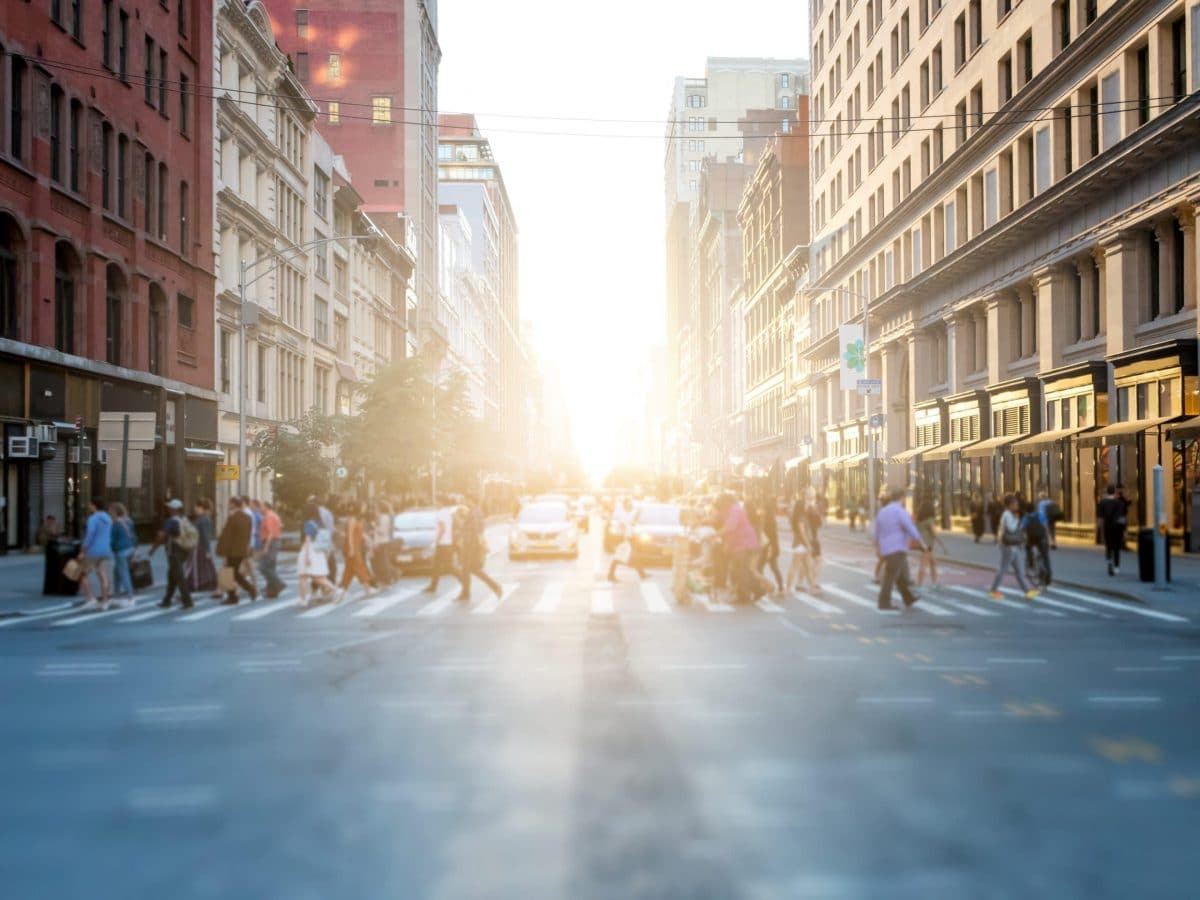 Driver behavior on the roads has worsened over the past year despite reduced traffic overall due to the pandemic. Speeding, reckless driving, and collision rates have increased significantly, not just among drivers but also between drivers and pedestrians. A spike in fatality rates among drivers and pedestrians — eight and twenty percent, respectively — is the result, according to the National Safety Council and the Governors Highway Safety Association.

Per trip, pedestrians are one and a half times more likely than drivers and passengers to die in a car crash, according to the CDC. As such, it may come as no surprise that law enforcement takes the risk of pedestrian fatalities very seriously. Proper driving behavior toward pedestrians on the road is strictly enforced across the country. Failure to yield the right of way to a pedestrian in a crosswalk or intersection is a serious moving violation. Even drivers who come to a complete stop may still be guilty of failure to yield if they come close to running the pedestrian down. Penalties for this offense are stiff and, in most states, constitute one to two points and a fine ranging between $150-250 for a first offense.

Nationally, citation rates for failing to yield the right of way a pedestrian occur nearly twenty times more frequently than pedestrian fatalities. Typically resulting from a tragic set of circumstances, pedestrian fatalities encompass a small fraction of the cases when drivers endanger pedestrians. It stands to reason that they do not paint the whole picture of pedestrian safety. On the other hand, citation rates for failing to yield to a pedestrian represent a more widespread pattern of behavior, providing a better understanding of the kind of driver to expect on the roads in a given area.

City to city, driver behavior towards pedestrians varies significantly. To understand pedestrian safety by metro area, researchers at Insurify analyzed data from over 4 million drivers in their database and identified the most dangerous cities for pedestrians. 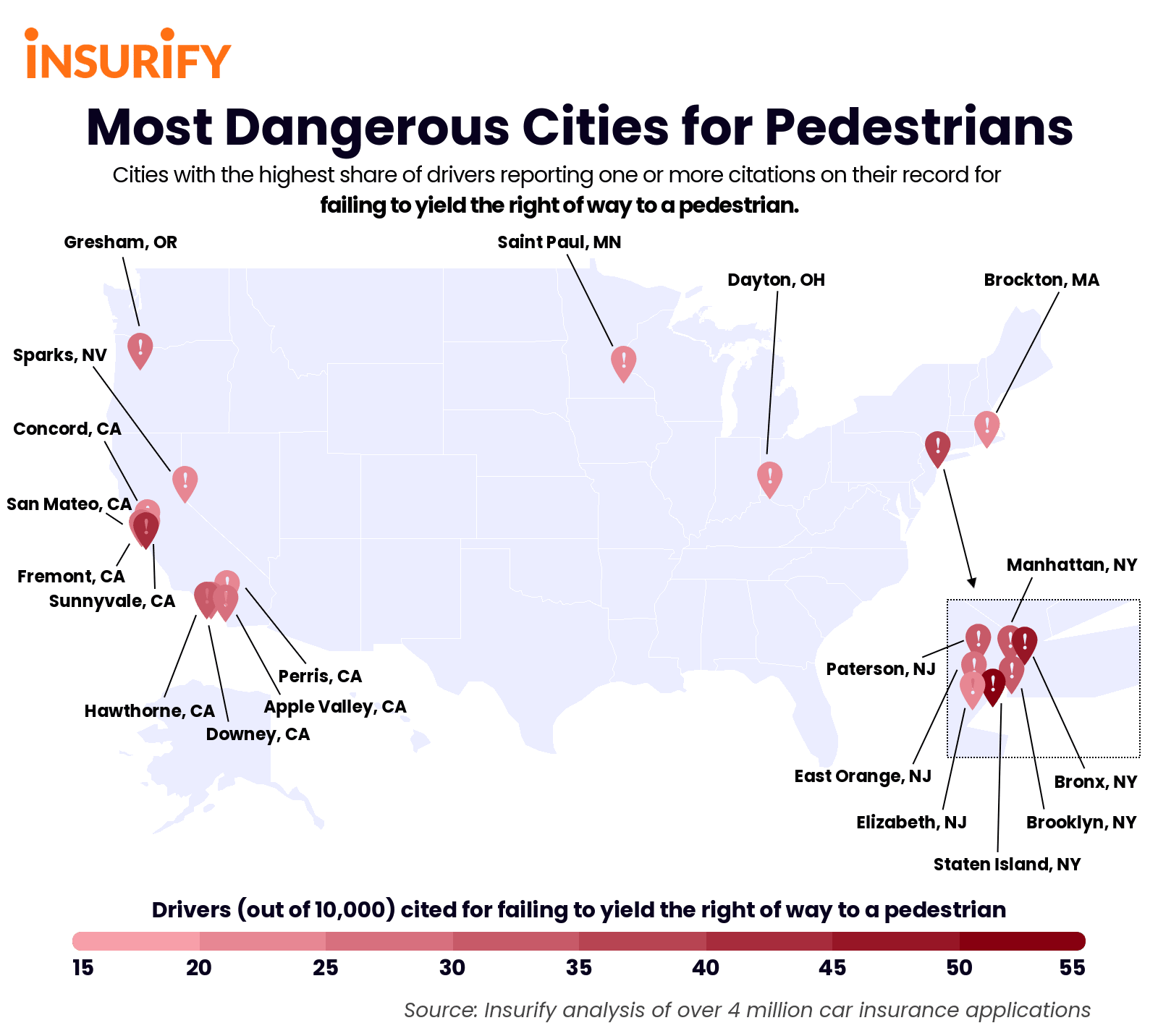 The data science team at Insurify, a car insurance quotes comparison site, referred to its database of over 4 million insurance applications to determine the most dangerous metro areas for pedestrians.

When applying for car insurance, drivers disclose information such as where they live and their driving history, such as any moving violations on their record. For each U.S. city, Insurify’s data scientists calculated the proportion of drivers reporting one or more citations for failing to yield the right of way to a pedestrian. The top twenty cities with the highest share of these drivers were ranked as the most dangerous cities for pedestrians. Due to the relative population size of each of New York City’s five boroughs and the notable exception of Queens from the top twenty, all five were evaluated as individual metro areas in the analysis.

Other studies take only pedestrian motor vehicle fatalities into account when determining the most dangerous cities for pedestrians, but this data alone may not paint the whole picture. C itations for failing to yield the right of way to a pedestrian occur nearly twenty times more frequently than pedestrian deaths and thus may represent a more widespread pattern of behavior towards pedestrians.

The Most Dangerous U.S. Cities for Pedestrians

The 20 Most Dangerous U.S. Cities for Pedestrians

Auto insurance comparison is a breeze with Insurify. Choose from quotes tailored to you in just a few easy steps.

Everything you need to know about finding the best rates on car insurance Utah, the easy way.

Comparison shopping for cheap auto insurance in Texas from the nation’s top providers has never been easier — see why.

Congested roadways in the Golden State mean that owning the right car insurance policy is a must. Luckily, car insurance quotes California drivers can trust (and afford!) is just a click away.

All you need to know about car insurance Florida in this one-stop comparison guide.

Looking for a car insurance policy to fit your budget? Find cheap auto insurance in GA from providers you can trust.