Getting behind the wheel while inebriated is never the right call. Unfortunately, drivers of these ten cars are the biggest culprits for driving under the influence this past year. 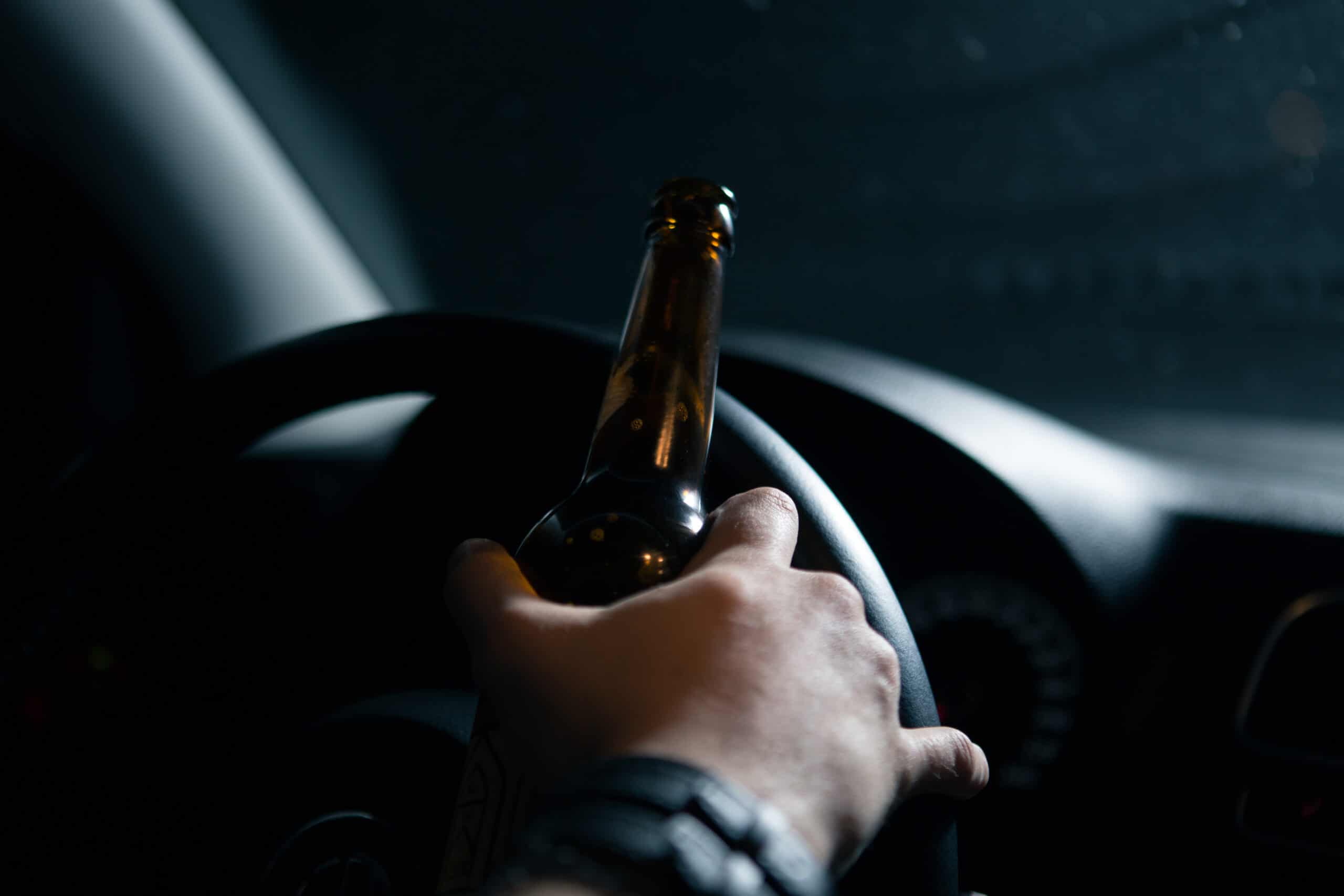 Driving drunk is one of the most dangerous choices a driver can make. Not only does impaired driving endanger the lives of the car’s driver and passengers, but also those of other motorists and nearby pedestrians. According to the National Highway Traffic Safety Administration (NHTSA), 28 people die in the U.S. every day due to alcohol-impaired car crashes.

In addition to seriously jeopardizing people’s lives, driving drunk also comes with major consequences for a driver’s insurance rates. Drivers with just one DUI on their record can pay up to $1433 more in premium costs per year compared to drivers with a clean record, according to Insurify’s most recent industry report. While, unfortunately, anyone can make the choice to drive drunk, drivers of certain vehicles tend to rack up DUI citations at elevated rates. To see which vehicles drunk drivers most often find themselves behind the wheel of, the research team at Insurify crunched the numbers to identify the car models with the most DUIs in 2021. 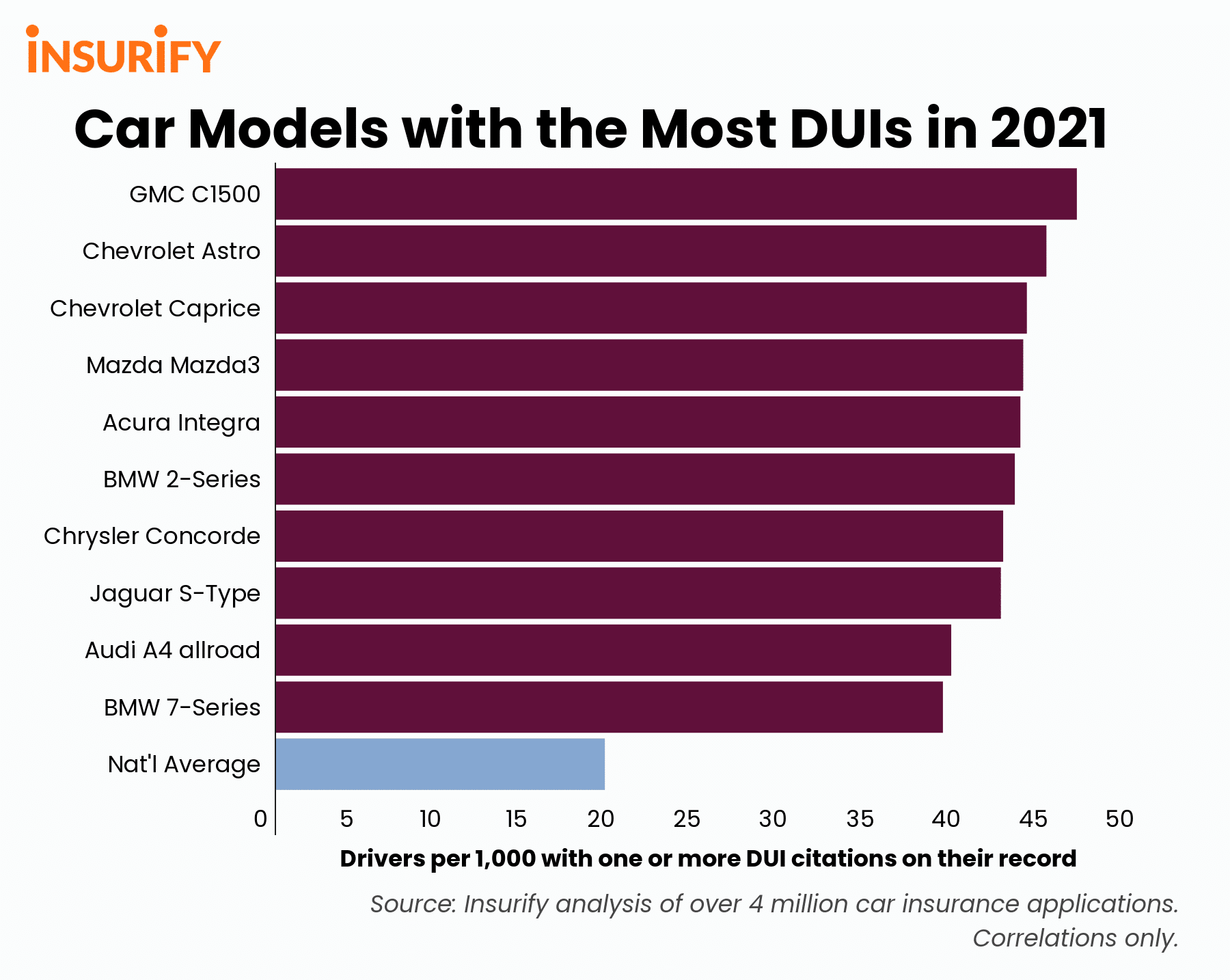 The data scientists at Insurify, an online auto insurance comparison platform, referred to their database of over 4 million car insurance applications to identify the car models whose drivers have the highest DUI rates in 2021. When applying for car insurance, drivers submit information including the make and model of their primary vehicle in addition to any moving violations within the past seven years.

Insurify’s data scientists compared the number of drivers reporting at least one DUI citation on their record in the past seven years to the total number of drivers across 415 different vehicle types. The ten vehicles with the highest share of drivers cited for a DUI were identified as the car models with the most DUIs in 2021. Data on MSRP and MPG were compiled from manufacturer websites and reflect the most recent vehicle model year available.

Cars with the Most DUIs

9. Audi A4 allroad -105% more drivers with DUIs than average

The BMW 7-Series, touted as BMW’s flagship sedan, is fit for drivers with a flair for the luxurious. With high-performance quality and a comfy interior, drivers of the BMW 7-Series are evidently more prone than average to getting behind the wheel when under the influence. With 38.5 out of 1,000 drivers reporting at least one DUI on record, BMW 7-Series drivers are 2x as likely to drive drunk than the average driver.

Your data is important. Insurify’s experts wrote the guide to still finding insurance quotes without email and other sensitive personal information online, for free, in just a few clicks.

Where can I get insurance without a license? It is possible after all: see what Insurify’s experts have to say about shopping for insurance while unlicensed.

Jaguar vehicles are highly celebrated for their classic luxury feel and commanding presence on the roads. Although discontinued as of 2008, the S-Type model is no exception: the luxury sedan is well-loved for its excellent handling and power. The third luxury vehicle in the rankings, drivers of the Jaguar S-Type have the eighth highest DUI rate in the nation that exceeds the national average by 120%.

Insurify is the one-stop shop for car insurance rates comparison. It’s free and takes just minutes to pull personalized quotes from multiple providers. See how much you can save on your policy by comparing with Insurify today!

Secret’s out: these are the auto insurance companies that don’t check credit, so drivers looking to improve their credit score can still find the best policies for their budget.

Known for its reliability, comfort, and sleek styling at an affordable price, the Chrysler Concorde is a practical choice for drivers on a budget. Despite being discontinued in 2004, Concordes are still making themselves known on the roads today. Chrysler Concorde drivers rack up DUIs at a rate that eclipses the national average by 121%, landing them seventh in the nation for their DUI rate.

With powerhouse engines and dynamic handling, the BMW 2-Series is an apt choice for drivers looking for a compact performance vehicle that packs a punch. It’s also evidently a popular choice among drivers who drive drunk at elevated rates. Drivers of the BMW 2-Series have a DUI citation rate that’s 125% greater than the national average and the sixth-highest nationwide.

Where can I find cheap auto insurance near me? Let Insurify take the legwork out of finding the best insurance rates for your wallet. Compare and stop overpaying on your premium ASAP!

Insurify’s car insurance cost calculator provides drivers with a free insurance estimate, personalized for personal profile and driver history. See how much you could be saving on your policy!

Using an online insurance comparison tool like Insurify can help drivers save time and money by providing quotes from multiple providers, all in one place.

The Acura Integra is hitting the roads once again with a much-anticipated relaunch in 2023; while the last new Integra came out over two decades ago, Acura is reviving the iconic sports car, much to the delight of nostalgic motor vehicle enthusiasts. Despite being off the market for the past twenty years, Integra drivers managed to find themselves in booze-induced traffic incidents significantly more often than the typical driver. 126% more Acura Integra drivers have at least one DUI citation on record compared to the national average, making this vehicle the fifth most DUI-prone in the nation.

Mazda3 owners are rightfully proud to drive a sedan that’s sleek, powerful, and budget-friendly. Unfortunately, these drivers also maintain the fourth-highest DUI rate in the nation. Despite earning the title of 2021 Top Safety Pick from the Insurance Institute for Highway Safety (IIHS), the behavior of Mazda3 drivers leans more reckless than their vehicle may suggest, especially when it comes to getting behind the wheel while inebriated: Mazda3 drivers are cited for driving under the influence 2.3x more than the average driver.

An oldie but a goodie, the Chevy Caprice was once the most popular car in America from the 1960’s through the early 1970’s. This classic full-sized automobile is a mainstay on U.S. roads even now, despite the fact that its last year of production was over a quarter of a century ago. Not only have Caprice drivers maintained their presence on the roads, but have racked up a pretty high DUI rate while at it: 43.3 out of 1,000 Caprice drivers have at least one DUI citation on record, a share that’s 128% greater than the national average.

The Chevrolet Astro is somewhat of an outlier in the rankings: it’s not a sleek sports car or luxury sedan, but a durable van with high towing capacity, used in many cases for commercial purposes. Although perhaps less fast and dynamic than the other cars in the rankings, Astro drivers still rack up DUIs at elevated rates, comparable to and even more than the drivers of the flashiest cars. 44.5 out of 1,000 Astro drivers report at least one DUI on record, a rate that exceeds the national average by 134% and lands them at second in the rankings.

The vehicle topping the rankings is a repeat offender: not only did the GMC C1500 make the top ten for its drivers’ speeding violation rate, but it’s number one in the nation for their rate of DUIs. With a whopping 46.2 out of 1,000 drivers reporting at least one DUI on record, GMC C1500 drivers are pulled over for driving drunk 144% more frequently than the average motorist. This practical pickup may be sturdier and less flashy than the luxury sports cars that make up a good portion of the rankings, but GMC C1500 drivers make the impractical choice to drive while under the influence more often than drivers of any other vehicle in the country.

Reviewed by
Andrew Huang
Director of Analytics
Andrew leads data analysis at insurify.com, and he has formerly led data analysis projects at kayak.com and realtor.com. Andrew strives to help people save money on their insurance, and in his free time he loves finding great deals on travel flights. Insurify's network bidding algorithms and Kayak's flight trends are personal favorite projects.
Read more from Andrew Huang
Insights>Car Models With The Most Duis 2021